From Venmo to crypto, nonprofit wants to move street vendors away from cash for their safety • Long Beach Post News
- ADVERTISEMENT -

A tech start-up and a local nonprofit are partnering to explore the possibilities of using new cryptocurrencies to help street vendors move away from cash—something that usually makes them an easy target for theft.

Some tech-savvy street vendors have already made the transition to use Venmo or Cash App, which are considered popular methods to send money or pay bills digitally.

But this duo’s idea looks beyond what’s in use now.

“We would love to catch them up to speed on what is happening in the crypto world,” Hj Chong, co-founder of philanthropic nonprofit Local Hearts, said. “If we can educate them to be up to date with technology, then they will be up to date with the times.”

Local Hearts and start-up ZUZcoin have their eyes set on the fringe of a new age of digital currencies, specifically cryptocurrencies, which has recently exploded onto mainstream media following a trading craze for Dogecoin, a crypto coin that gathered popularity thanks to celebrity endorsement from Tesla’s Elon Musk, and volatile stock trading.

Given its decentralized nature with no traditional banking fees and an untapped potential, cryptocurrencies could be used to help street vendors accept different forms of payment so they can sell their elotes and chopped fruit by the Bitcoin—so their theory goes.

An example of what this could look like in practice would be scannable QR code stickers placed on the sides of a food cart. A customer with a digital wallet application installed on their smartphone with a few crypto coins to spend could simply scan the QR code with the phone and transfer funds directly into the digital wallet of the street vendor.

The vendor could then trade in the crypto coins for U.S. dollars through a company that offers that sort of service.

Chong, Local Hearts’ co-founder, admits that the idea seems far fetched, and even more confusing for most street vendors—and customers—to use today, but he believes cryptocurrencies could be an alternative to help keep street vendors safe when working on the streets.

Local Hearts is partnering with ZUZcoin, a crypto coin arm of a newly formed digital software company called Zero Utility, to help them traverse the complexities of cryptocurrencies.

The two organizations met in Long Beach during a backpack giveaway through the Manny Pacquiao Foundation in April. ZUZcoin officially launched in March this year and raised over $30,000 in crypto currencies during the giveaway event for both nonprofit groups. The company has also helped Local Hearts establish a digital wallet so the organization can also accept crypto coin donations.

Jared Brunson, CEO of ZUZcoin, and the 13 employees within the company, have developed a niche in a growing digital marketplace of non fungible tokens, commonly referred to as NFTs.

Brunson said that digital artists or musicians collaborate with ZUZcoin to help them auction and sell ownership of their works of art or music.

Similar to cryptocurrencies, the NFT market is still fairly new, though some NFTs are already selling for large sums of money on the internet. A viral 2007 video titled “Charlie Bit Me” on YouTube recently sold as an NFT for about $761,000, as reported in Yahoo Finance.

Brunson said ZUZcoin’s main role in the partnership with Local Hearts is to serve as a guide into the digital currency market for street vendors.

“There’s a barrier. Not too many people know how to use crypto, and that’s another educational factor that we want to tackle,” Brunson said. “We have access to the inside of the space, so we’re able to bridge the gaps, and that’s our biggest ability at the moment—having connections on the outside world and within the crypto space, which is pretty shelled off.” 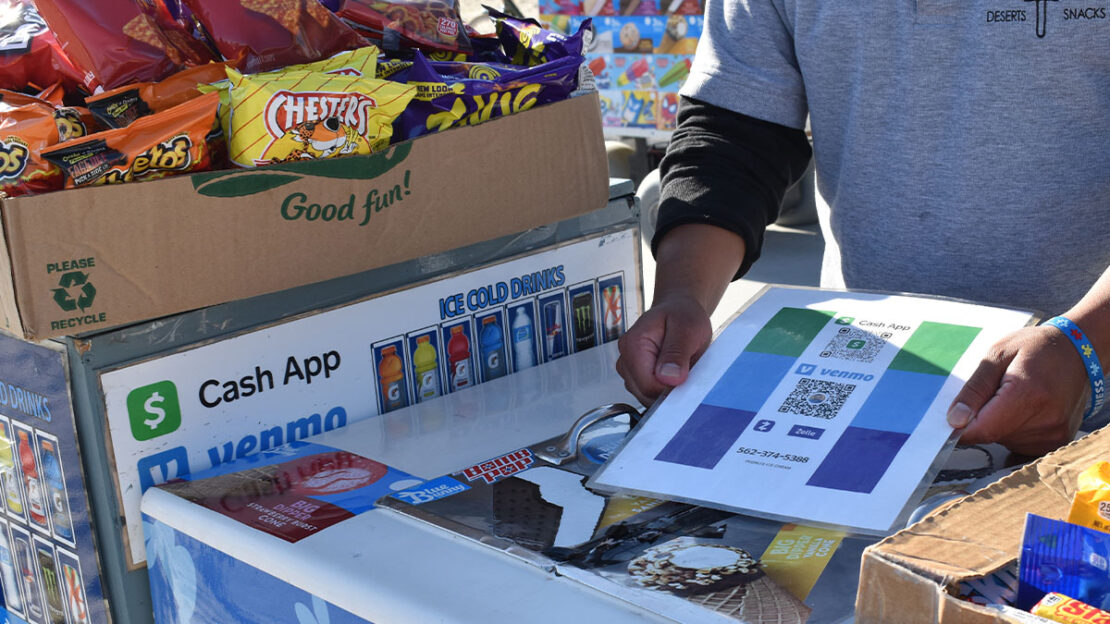 Street vendor Pedro Castellanos-Aguilar holds a laminated sheet with direct QR code links to his Venmo and Cash App accounts for customers to buy items from him without using cash. Photo by Sebastian Echeverry.

Aside from industry know-how, some street vendors also face language and cultural barriers.

Chong says most street vendors are quite savvy, but they still struggle to catch up with modern methods of payment.

“We know a man who’s in his 40s and he just knows Facebook, WhatsApp and that’s it,” Chong said.

On Tuesday, the Long Beach City Council announced that they are looking into more safety programs to protect street vendors, including helping them move away from cash transactions as well. Cash is also still a favored form of payment because they can easily send money to their families back home, Chong said.

There have been some encounters in which street vendors were seriously injured and robbed. During an unveiling event for a new rainbow-colored lifeguard tower that burned down this year, Getzer Tellez, an older vendor who was selling items at the event, said he gets nervous when selling on the street while carrying cash in his pockets.

“Sometimes you meet people with bad intentions, and you get nervous,” Tellez said in Spanish.

According to data from the Los Angeles Police Department, crimes against street vendors rose nearly 337% between 2010 and 2019.

He already has QR codes on a laminated sheet of paper with direct links to his Venmo and Cash App accounts. He said he’s been using the digital services since 2017 and has accepted debit card payments since 2012.

While the two men worked, Tellez had to turn down some customers because he only took cash. Tellez said he’s more interested in learning how to adapt to debit card payments, and noted that cryptocurrencies seem too complicated for him to learn.

Jeruel Garado, a marketing partner with ZUZcoin, echoed Tellez’ sentiments, adding that the crypto market is not practical yet for street vendors, but hopes that it will become more accessible in the future.

“This is not particularly friendly yet for street vendors, as of right now, and that is mainly due to the high cost of transferring the coins from wallet to wallet,” Garado said. “It will come to a point where these fees are going to be very low. It’s a matter of adapting and understanding it today so they can be more empowered for tomorrow.”