The newly built Gerald Desmond replacement bridge is set to open for use for cyclists and motorists in the second week of October, said Mario Cordero, Port of Long Beach executive director, during a press conference Wednesday.

Officials were eyeing July as the official opening window for the bridge, but COVID-19 and new technologies that added unforeseen days to construction played a role in its delay.

Cordero said the bridge is a major port investment to move cargo more efficiently, and although the bridge has not been officially named, he’s already come up with an unofficial title.

“I call it the bridge to everywhere,” he said.

The bridge stands 205 feet over the water and is 8,800 feet long. It will have three lanes in both directions and will include a bike lane named for the late Mark Bixby who had long advocated for a bike path connecting Long Beach and San Pedro.

Once it’s officially completed, the bridge will be the second-tallest cable-stayed bridge in the nation. 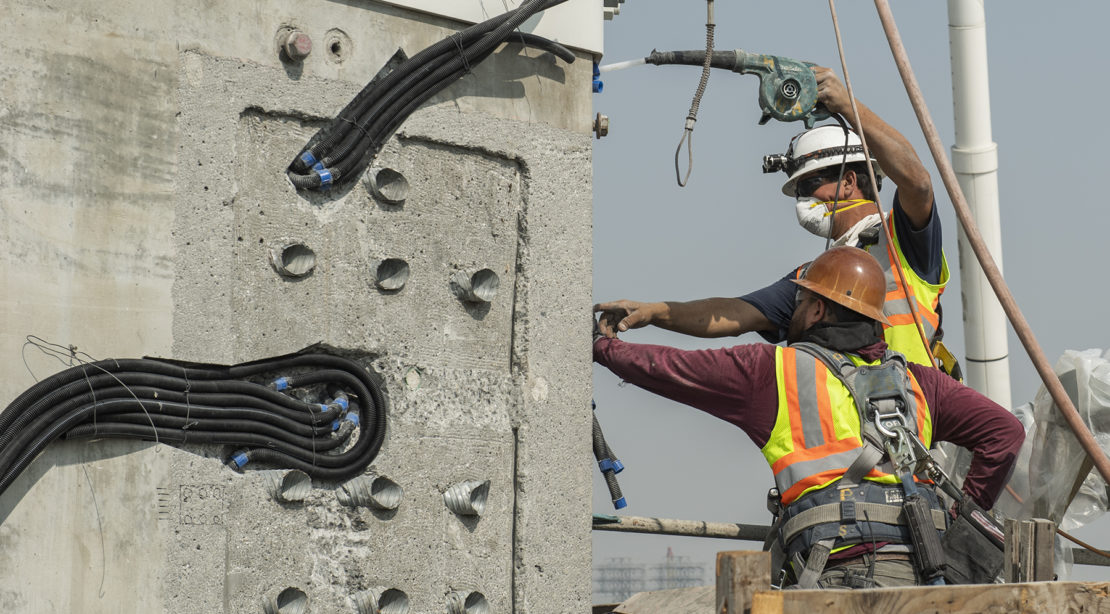 Construction workers put the finishing touches on the new bridge, set to open in  mid-October in the Port of Long Beach. Photo by Thomas R. Cordova.

The bridge was designed to be a “landmark” project, Capital Programs Executive Duane Kenagy said, that would include LED lighting that can change color for various events, such as red, white and blue for the Fourth of July, or green for  St. Patrick’s Day.

“This is the type of landmark you’ll see on postcards,” he said.

But aside from its looks, officials said the bridge will also serve as a global statement in which the Port of Long Beach continues to grow into a competitive world shipping port. Conversations to build a new bridge began in 2008, as shipping vessels docking at the port got bigger. Trade with China was also expanding, and the need to move greater volumes of cargo quickly became more apparent.

Approximately 20,000-25,000 trucks transport cargo in and out of the Long Beach port every day.

“We have a bridge that shows Long Beach will be the port of choice,” LaBar said.