‘Our social life is almost back’: Gyms let guests back indoors after months of closures • Long Beach Post News
- ADVERTISEMENT -

David Quiñones and Lucy Owen walked out of the Planet Fitness gym near the Traffic Circle Wednesday morning with masks in hand, wiping sweat off their brows. The two had just finished a cardio and weight-lifting session inside—something that had been banned for months until this week.

“We were just tired of getting fat,” Owen joked. But in all seriousness, the recent lifting of some COVID-19 restrictions on businesses, including gyms and fitness centers, meant that a part of their normal routine was finally returning.

“Our social life is almost back,” Quiñones said.

Long Beach’s new health order went into effect Monday and allowed gyms to reopen their indoor spaces at 10% capacity as long as those working out wear a mask at all times and remain 6 feet away from other gym members.

Some smaller, privately owned gyms and large fitness centers with space outside have already been conducting workout classes with guests in the open air, and some stay they’ll stick with that option.

“I’m not going to be able to just reopen; I’m not 24-hour Fitness,” Ferraro said. “My gym depends on me being close to people and motivating them. It just won’t work.”

When it comes to personal training classes, the new health order says only one trainer and one client are allowed to work out together per fitness studio.

For its part, the 24-Hour Fitness at North Bellflower Boulevard and East Spring Street was hosting indoor and outdoor exercise areas Wednesday morning. But the Planet Fitness location where Quiñones and Owen worked out five times a week before the pandemic had been closed for almost six months before this week. 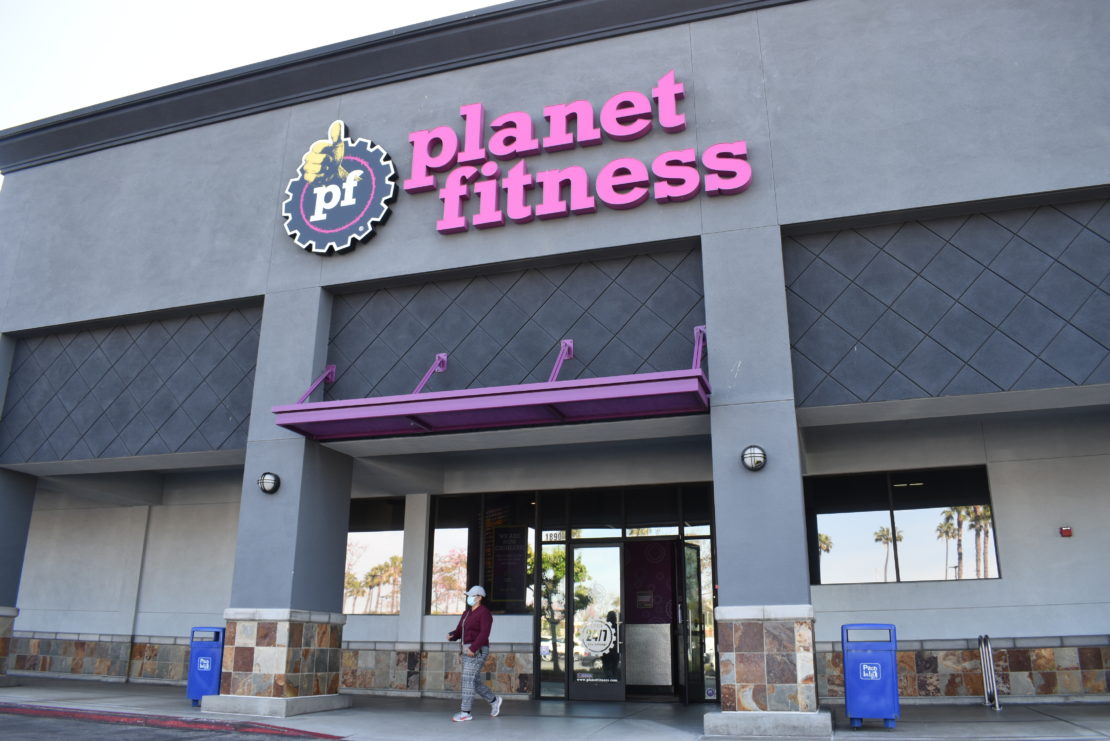 A woman walks out of the Planet Fitness gym located at 1890 Ximeno Ave. in Long Beach on Wednesday, March 17, 2021. Photo by Sebastian Echeverry.

Adrian Armendariz, the gym’s manager, said he was excited to allow guests back in. Standing behind the check-in kiosk, Armendariz greeted guests behind a wall of plexiglass.

He said, cumulatively, roughly 200 people had returned to the gym since they opened Tuesday, however, at any given time the maximum limit of about 90 people inside at one time had not been reached.

“The most we’ve had is like 60,” Nick Lemon, a gym employee, said. Before the pandemic, that location’s occupancy limit was about 300 people.

The staff regularly disinfected equipment and kept the door open to allow for improved ventilation.

“A lot of people are still not comfortable coming back,” Armendariz said. “Everything that we do here is to ensure we’re doing our part and keeping things clean to keep our gym open.”

Like in many industries, the virus has meant a financial hardship for gyms. The closures of Planet Fitness locations caused the company to suffer losses in both revenue and membership attendance. Chris Rondeau, Planet Fitness chief executive officer, told investors that gym membership signups had been under “some pressure” after reporting the company’s closing third quarter last year, which ended on Sept. 30.

Sam Segnere, director of operations for Planet Fitness, said he was excited to bring back employees that had been laid off. He said they were the first people he thought of when they closed down their locations.

“That was the most painful one. Everyone is back, most employees came back,” he said. “I was pretty bad out there.”

When the gyms closed down, along with almost everything else, Owen and Quiñones would take mile-long walks around the park to break the monotony of staying inside all day, but even that was starting to get mundane. Owen eventually bought a treadmill, but it just wasn’t the same for her.

“You’re home a lot going crazy with a lack of a social life,” she said. “I’m glad to be back to work.”

With other businesses opening up, such as movie theaters and restaurants, Quiñones and Owen have been able to enjoy the outings they were able to regularly pre-pandemic—to some extent. The two watched a movie at the Cinemark Pike Outlets that opened this past weekend, Quiñones said, adding that tickets for the showing—in limited supply due to social distancing—had been sold out.

Despite the restrictions, Quiñones and Owen say they’re looking forward to coming back into the gym to maintain their fitness habits, even if it means huffing through a knitted face mask at the squat rack.

“You get used to it,” Quiñones said. “It’s like I was telling her, you accept it, but you don’t have to like it.”