Hector Quintana has seen many trash pileups in his 16 years as a refuse worker in Long Beach, but nothing was like the summer of 2020 in the midst of the COVID-19 pandemic.

Old couches, televisions and overflowing bins clogged alleyways. Furniture was sometimes labeled with a “COVID” sign as a warning that someone in that household had been infected. Trash trucks increased daily routes to manage the overflow.

“Last year was by far the worst I’ve ever seen it,” he said. “We were slammed.”

The city also saw a 38% increase in requests to pick up bulky items and a 34% increase in illegal dumping in alleys (about 700 additional requests per month), as residents with more time on their hands cleaned out their garages and yards. The department saw about 140,000 complaints and calls for trash service last year, up 30% from the previous year. 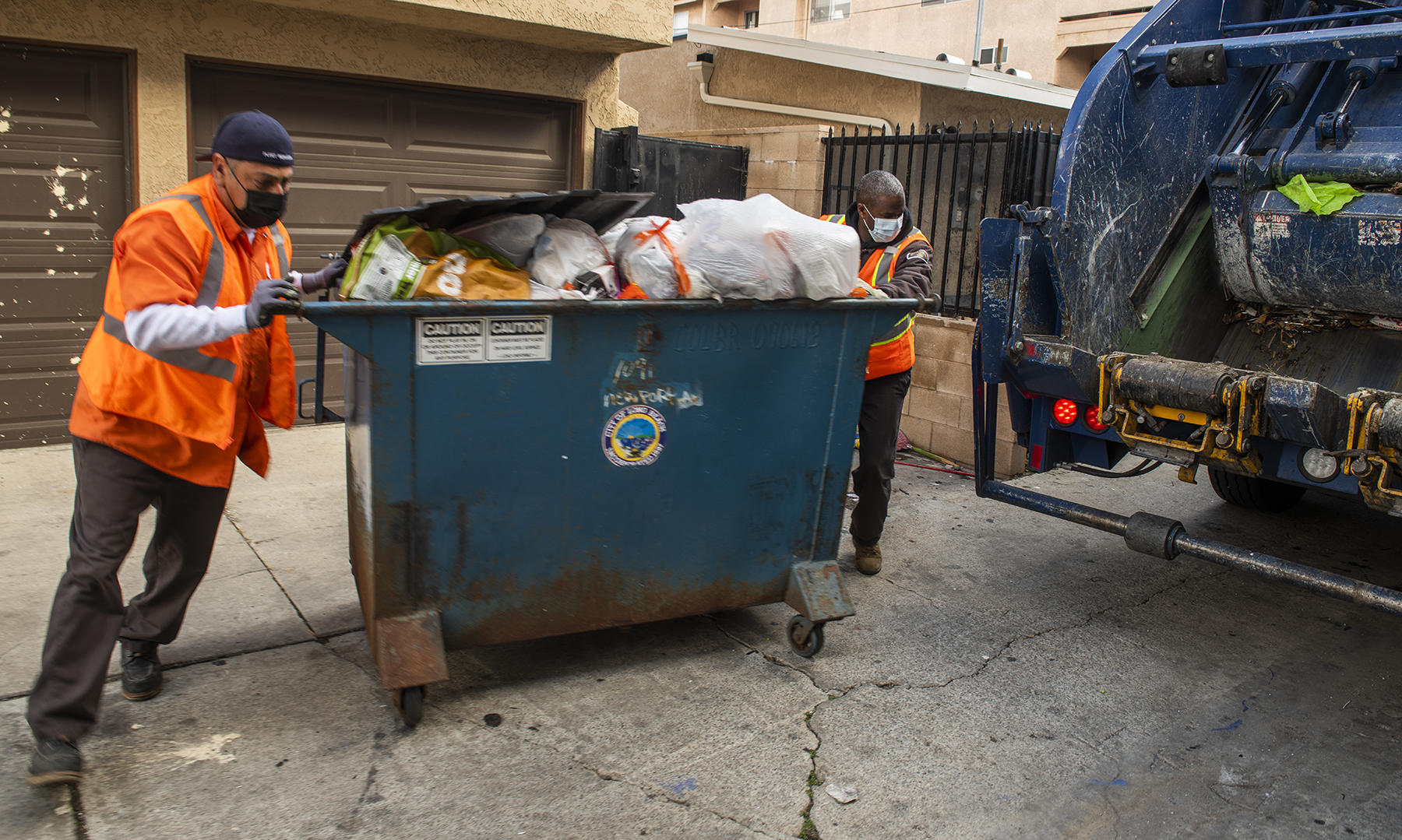 In all, the surge amounted to an additional $1.5 million cost for the city last year, Melkonian said.

Last summer was especially bad as employees worked overtime and struggled to keep up their routes as many staffers called in sick due to the pandemic, he said. Trash and old furniture piled up, especially in densely populated neighborhoods in central and west Long Beach.

“It wasn’t easy and it was a lot of work for the team,” he said. “Our refuse operators really worked hard to ensure we could provide the best service.”

At one point, refuse workers said they felt like they were literally buried in trash, but the problem has eased in recent months, Melkonian said.

“We’re now in a place where it’s manageable,” he said.

Refuse workers will soon have extra funding to target hard-hit areas thanks in part to a $153 million boost in funding for Long Beach from the federal American Rescue Plan, which was signed into law last week.

On Tuesday night, the Long Beach City Council approved a spending plan for the stimulus cash that includes a $5 million “Clean Long Beach Initiative” for trash and graffiti abatement and business and  neighborhood corridor cleanups.

As residents have noted in comments on social media, Long Beach was looking somewhat shabbier last year while many services including neighborhood cleanups, code enforcement and graffiti abatement were cut in the pandemic.

At one point, the city’s Clean Team, which works to remove litter and debris in public rights-of-way, was down to one person on staff, Melkonian said, adding that the city has since upped the team to eight staffers. 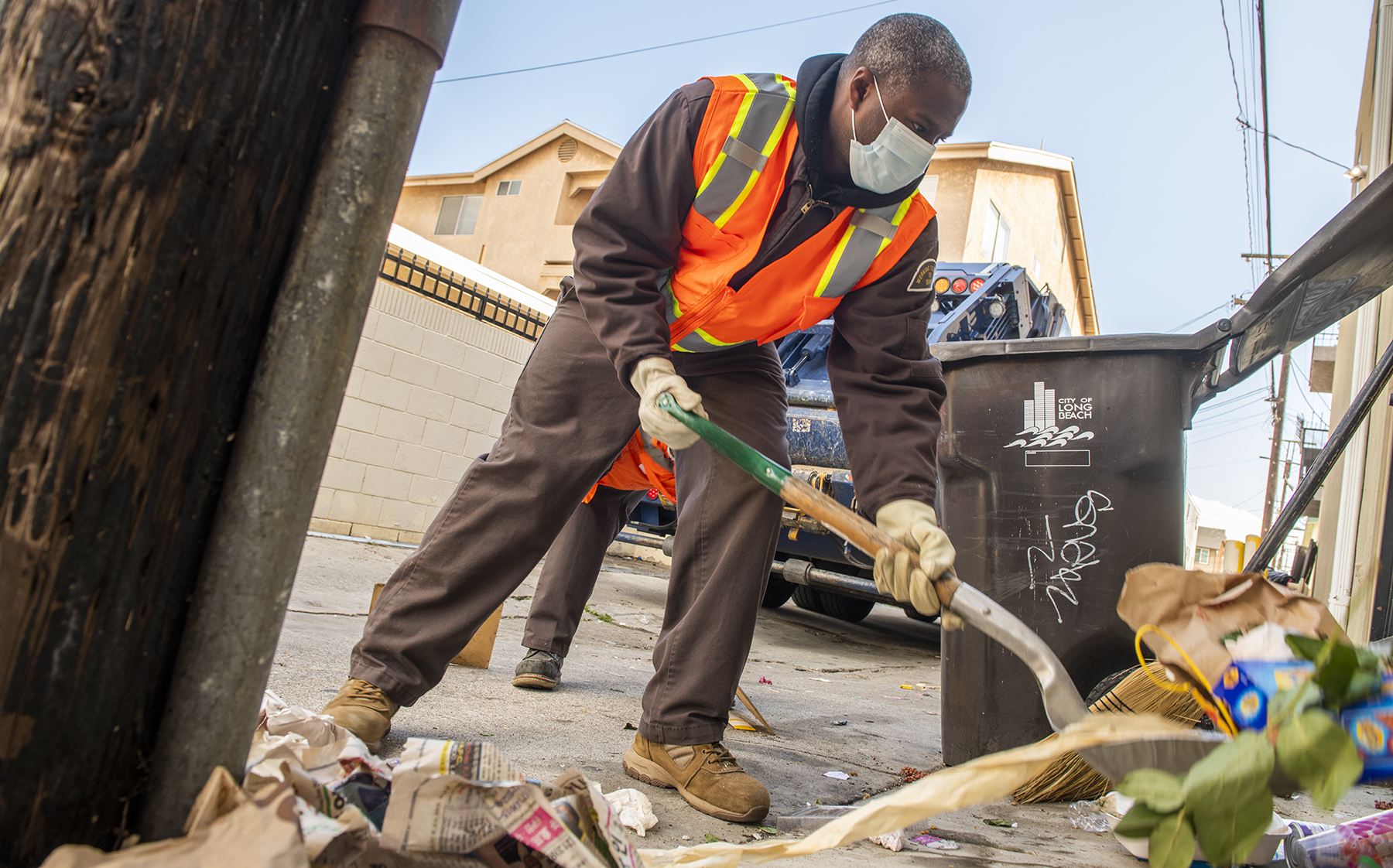 On a recent Tuesday, Quintana and his partner, David Estell, worked a trash route in a congested alleyway near the corner of 10th Street and Redondo Avenue, where they spotted three illegally dumped couches, along with piles of trash in the street.

Quintana said he’s seen many bizarre items on his routes over the years. He once found a pair of dentures sitting on a curb.

On any given day, 40 trash trucks are navigating Long Beach corridors picking up about 700 tons of waste. Workers take extra precautions with masks, disinfectant wipes and gallons of hand sanitizer.

For Quintana, who cares for his elderly parents, the news couldn’t come soon enough.

Estell, who has been on the refuse job for one year, said residents frequently stop him to show their appreciation.

“It make us feel good that people see how we’re cleaning up the city,” he said.