Whatever the outcome of the recall election, Newsom will likely still have the final say on the hundreds of bills the Legislature put on his desk in the past two weeks. Even if Newsom were to lose the election, by the time his successor took office the deadline for signing or vetoing legislation will have passed.

Bills that have passed must be reviewed by the governor before becoming law, unless otherwise noted. Here’s a look at what passed — and what failed — in the California Legislature this year.

Two bills passed that would make it easier to build small apartment buildings in areas where only single-family homes are allowed. The goal is to address a housing shortage in the nation’s most populous state.

A group of 241 cities have urged Newsom to veto one bill because it would bypass local zoning laws, with some exceptions.

The bills would have made it easier to turn abandoned shopping malls into apartment buildings. Both bills passed the Senate but did not get a vote in the Assembly.

A bill passed that could make California the first state to pay people struggling with drug addiction to stay sober. The treatment, known as “contingency management,” pays people as little as $2 for every negative drug test over the course of a few weeks.

The federal government has been doing it for years with military veterans, and research shows it is one of the most effective treatment for drugs like methamphetamine and cocaine.

But bills that would have legalized some psychedelic drugs and given opioid users a place to inject drugs while supervised failed to pass this year. Sen. Scott Wiener, the author of both bills, said he will try again next year.

Lawmakers approved a bill that would end the careers of bad cops by preventing them from getting hired at other law enforcement agencies. The bill would create a mandatory new license for law enforcement officers. A new disciplinary board could permanently revoke someone’s license with a two-thirds vote.

The Legislature also approved barring police from arresting anyone for loitering with the intent to engage in prostitution, following a debate over whether the move would help or harm sex trafficking victims.

But Sen. Scott Wiener then used a procedural move to withhold his bill from the governor’s consideration until next year, saying supporters need more time to make their case about why it’s a good idea.

Jaywalking would be decriminalized under another bill that passed, eliminating a crime that Democratic lawmakers said is arbitrarily enforced against people of color.

California would set statewide standards for law enforcement’s use of rubber bullets and chemical irritants during protests under another of the many criminal justice bills considered by lawmakers.

But a bill that would have overhauled California’s cash bail system failed to pass this year. The bill’s demise comes one year after voters blocked a law that would have ended cash bail in favor of risk assessments.

Low-income people who are 50 and older and living in the country illegally can now get their health care bills paid for by taxpayers. Lawmakers also made it easier for older people eligible for Medicaid by eliminating an asset requirement that disqualified many people 65 and over.

Newsom signed both proposals into law as part of the state budget.

California public schools and colleges would have to stock their restrooms with free menstrual products under another bill that passed. But a proposal that sought to make health care less expensive for everyone in California failed to passed this year.

Newsom had wanted to create a new “Office of Health Care Affordability,” which would have the power to regulate health care prices.

Lawmakers passed a bill that would make ethnic studies a requirement to graduate high school in California. Newsom vetoed a similar bill last year because he thought the model curriculum was “insufficiently balanced.”

California became the third state to approve reparations of about $25,000 a person for those who were sterilized against their will. The program targets people sterilized under the state’s eugenics laws that sought to weed out undesirable traits by sterilizing people with mental illnesses and other issues.

The state also agreed to pay women the state coerced into getting sterilized while in prison. Newsom signed that into law as part of the state budget.

Lawmakers also moved to allow the return of prime beachfront property to descendants of a Black couple who were stripped of their Bruce’s Beach resort for African Americans amid racist harassment in the city of Manhattan Beach a century ago.

California is the first state to approve a statewide guaranteed income plan. Newsom signed into law a $35 million plan designed to give monthly cash payments to qualifying pregnant people and young adults who recently left foster care with no restrictions on how they can spend it.

Lawmakers approved, and Newsom signed, a plan to send stimulus checks of up to $1,000 to more California adults. Lawmakers also agreed to use federal money to pay off 15 months worth of people’s unpaid rent. 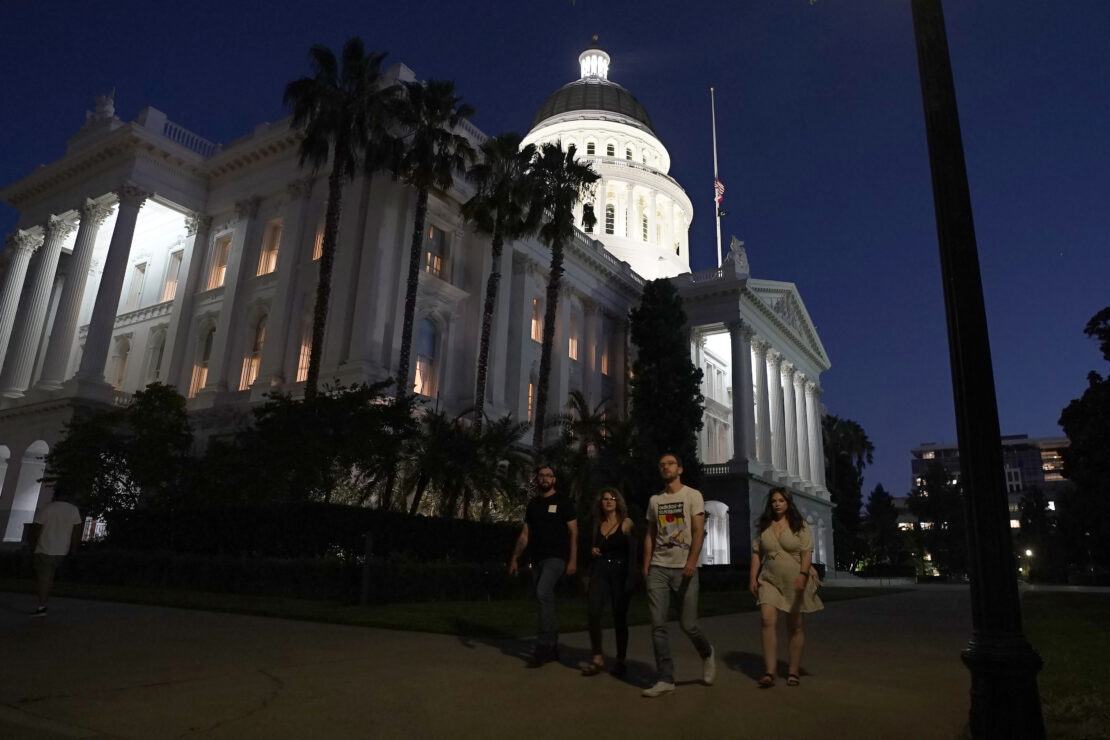 The lights of the Capitol dome shine as lawmakers work into the night in Sacramento, Calif., Friday, Sept. 10, 2021. Lawmakers have until midnight to finish work on the 2021 legislative session. (AP Photo/Rich Pedroncelli)