A $25 million taxiway improvement project at Long Beach Airport is taking longer than expected due to supply chain issues, which means that nighttime flights will be forced to land on an east-west runway near Douglas Park until November, the airport said Tuesday.

The taxiway replacement began in January as the airport sought to replace the asphalt pavement that had reached the end of its useful life. The new concrete pavement taxiway is expected to last for 40 years, but shortages of concrete and asphalt have changed the originally expected completion date of August by a few months.

Kate Kuykendall, a spokesperson for the airport, said that construction is now expected to be complete near the end of November.

Because the taxiway construction is happening next to the airport’s main runway, which is used by commercial flights, it has been shut down at night from 10 p.m. to 6 a.m. during the project.

Flights arriving after 10 p.m. have been shifted to the smaller 8L-26R runway during the course of the project, except on Fridays and Saturdays. The runway runs parallel to Wardlow Road and is also used by smaller aircraft.

The result is neighborhoods not typically affected by aircraft noise have likely heard a limited amount of planes flying overhead for the past few months. 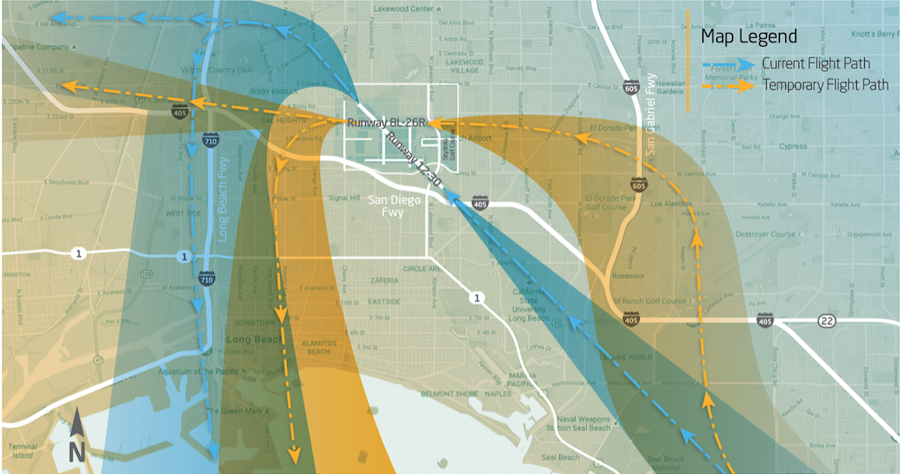 A Long Beach Airport graphic showing the adjusted night-time flight paths that could be in effect until November.

Those are typically hours that commercial flights do not operate at the airport due to a local noise ordinance that prohibits large aircraft activity at the airport between the hours of 10 p.m. and 7 a.m. because of established limits on allowable noise. Military flights are exempted from the ordinance.

Late-night flights used to be a larger issue for residents living near the airport, but their frequency has dipped considerably since JetBlue began winding down service at the airport in October 2020.

In 2019, the last full year of flight activity before the pandemic, JetBlue racked up 128 flights between the hours of 10 and 11 p.m., the hour that airline operators can typically be exempted from punishment if there was a delay caused by weather or mechanical issues.

But JetBlue also tallied 88 flights between the hours of 11 p.m. and 7 a.m., which were subject to fines under a consent decree that it entered into with the City Prosecutor’s office. The fines for late-night flights totaled $984,000 for JetBlue in 2019, with that money being given to the Long Beach Public Library Foundation.

Southwest Airlines, the airport’s largest tenant after JetBlue pulled out, has accrued 49 late-night flights through July, with just five happening after 11 p.m., according to monthly noise reports issued by the airport.

The taxiway construction is not the only project underway at the airport. A $110 million overhaul of the terminal building has been underway since 2020 and the airport opened the new ticketing lobby built through that project earlier this year.

Work is currently underway on the historic preservation of the mosaic-tile floors in the terminal building, which is being converted into a new rental car area and a new baggage area is nearly complete. Airport officials told the Long Beach Business Journal that all of the terminal improvements could be completed by the end of 2023.

The airport is expected to begin work early next year on roadway improvements leading up to the terminal building as well as landscaping and accessibility improvements. That portion of the construction is being funded by $12.8 million the airport received through the federal infrastructure plan and the improvements are expected to create a larger drop-off and pick-up area as well as improve pedestrian walkways at the airport.