Eva and Tom Ognibene, the owner of Devi’s Donuts & Sweets, have spent the last six years selling espresso-filled, creme-brûlée and lemon-pistachio doughnuts at local farmers markets. But last month they realized a dream they had before the COVID-19 pandemic by opening a storefront near Long Beach’s Zaferia District.

The plant-covered building on Anaheim Street between Loma and Euclid avenues has a small sign with a cartoon version of their 7-year-old daughter, Devi, holding a sprinkles-covered doughnut. The roof has an American flag and one with a green “V,” a beacon for some, and a pleasant surprise for others.

Their doughnuts are 100% vegan. 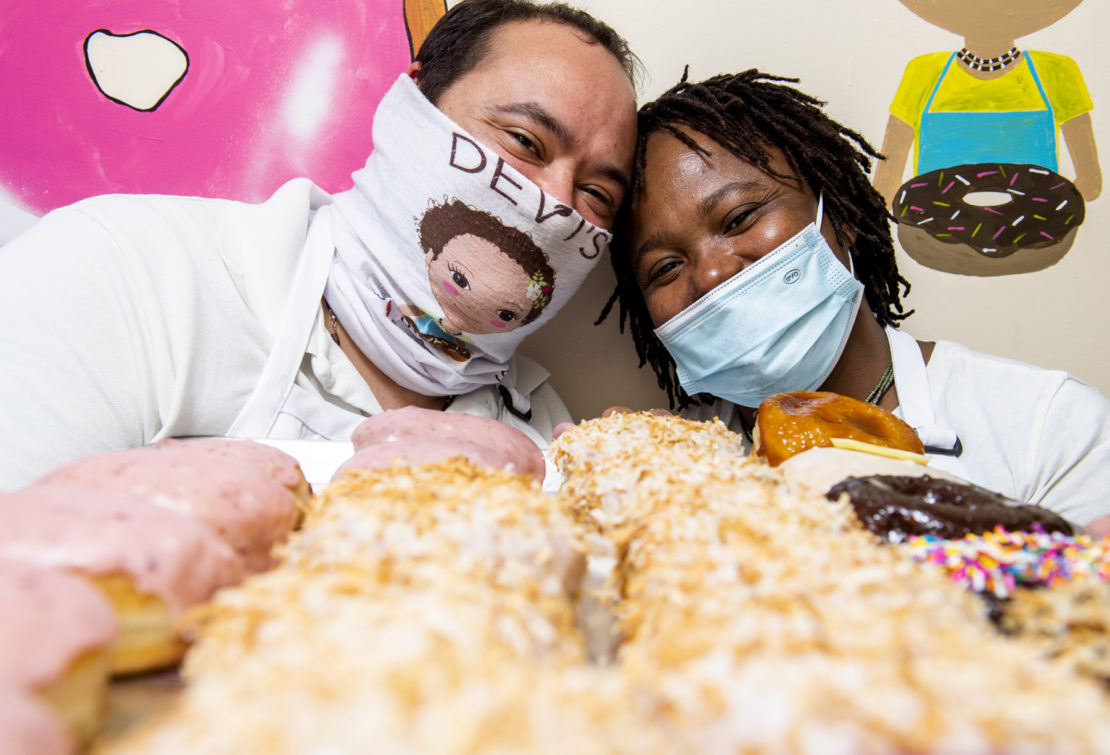 Tom and Eva Ognibene hold up a tray of vegan doughnuts at their shop in Long Beach Thursday, April 29, 2021. Photo by Thomas R. Cordova.

“We don’t advertise big on being vegan because a lot of the time when non-vegans hear ‘vegan’ or ‘plant-based’ it automatically just shuts them down and they’re like ‘nah,’” Tom said.

But plenty of people are saying “yes,” especially now that Devi’s is open six days a week instead of one.

The 270-square-foot location is almost three times larger than the tent they made doughnuts out of every Sunday at the farmers market at the Long Beach marina.

When the pandemic hit, they used a friend’s commercial kitchen to prepare doughnuts for sale every Sunday. Tom says he misses the experience it provided for customers.

“Before COVID we were cooking on site at the farmers market and that was the coolest thing in the world,” he said. “The experience of seeing a doughnut cooked in front of you, smelling the melted hot sugar … it’s an experience in itself.”

The couple still plans to sell their sweets at the marina on Sundays and will close the storefront on Mondays.

How the flavors are selected is a family affair. Some come from other desserts they’ve tried and figured out the science to turn them into doughnut flavors. Others, like the PB&J doughnut, are inspired by things their kids are “fiends” for, or individual flavors they’re fond of.

“My daughter likes dragonfruit and she also likes lavender so we have a lavender-rose doughnut and the color is dragonfruit,” Eva said.

Tom says Eva is the mastermind behind the doughnuts and lovingly refers to her as the “African Doughnut Queen.” In her native Ghana, the closest thing there is to doughnuts are “Ball floats” which resemble doughnut holes.

They took their first steps into the doughnut business about 15 years ago when Eva acquired a simple doughnut recipe from a friend and they started making doughnuts for small family parties and events. After some encouragement, the couple, who were both raised vegetarian and are now vegan, decided to go full steam into the boutique doughnut business.

“They were like ‘Hey, these things are actually pretty damn good, why don’t you guys try to take it to the next level?’” Tom said. 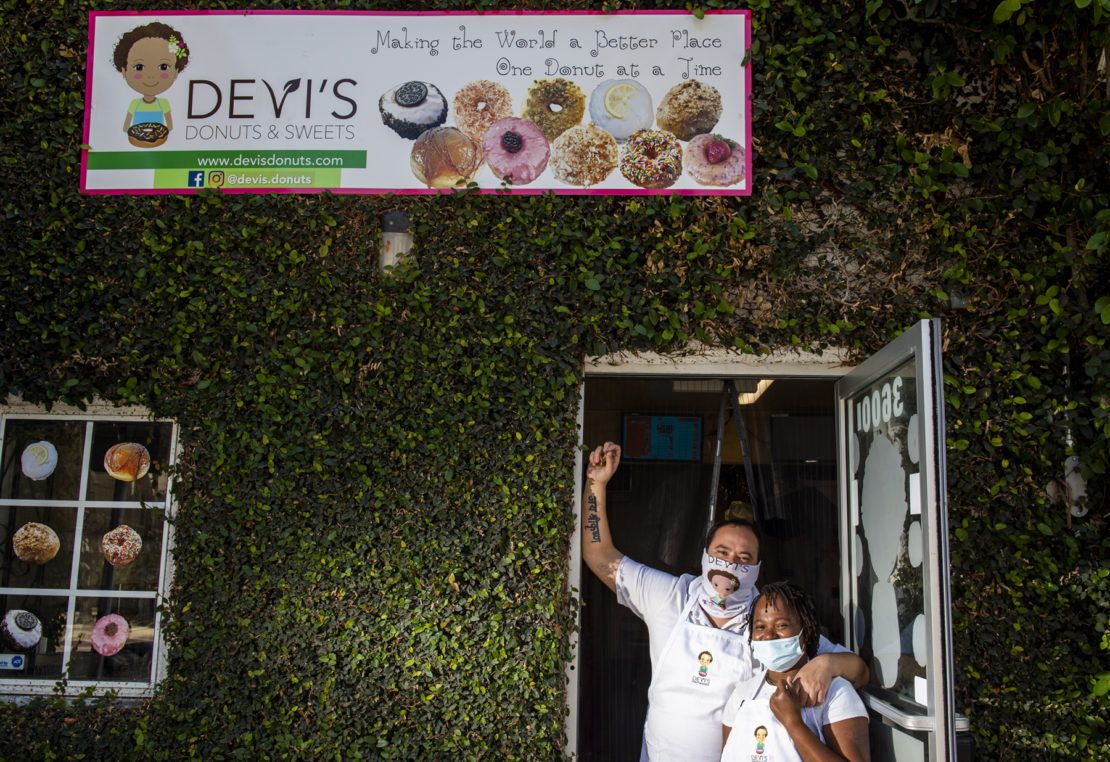 Tom and Eva Ognibene stand in the doorway of their vegan doughnut shop in Long Beach Thursday, April 29, 2021. Photo by Thomas R. Cordova.

They started at the Bixby Park farmers market where their doughnuts quickly sold out. Six years later they’ve become a staple of the regional vegan cuisine scene, making appearances at Vegan Depot.

Now that the business is open six days a week instead of just on Sundays for people who could make it to the marina farmers market, the couple said the product is both more accessible for their regulars, but has also exposed Devi’s to a whole new audience on the Anaheim Corridor.

Eva’s reservations that their new location was too tucked away was quickly put to rest. They sold out of doughnuts on their first day.

“They’ve been pouring in and coming in to support us,” Eva said. “It’s an amazing and uplifting feeling that we are going to make it.”

But, for the Ognibene’s, doughnuts are just the start of what they hope to do in Long Beach. Tom said he wants to create some kind of fund or program that helps the youth.

“We want to give back to the community and one thing I want to do with whatever position or platform that eventually we can make for ourselves is I want to help at-risk youth,” Tom said. “Counsel them, give them opportunities for employment, because a lot of the time kids will do stupid things because they have a lot of time on their hands.”