About 10 people live in the Dominguez Gap homeless camp along the edge of North Long Beach. Some are older—one woman just turned 81—and many have been there for years.

“They’re a real community,”  says Laurie Ramey, a homeless-outreach director. “They really look out for each other.”

So when one man at the camp came down with a fever and other flu-like symptoms in late March, Ramey and her team—who have been checking on the camp daily—worried he wouldn’t want to leave his community for isolation in El Segundo, where he’d be tested for COVID-19.

“We’re asking people to go to a place that they’re not familiar with around people that they don’t know,” she said. “It is really frightening.”

That tension is common during the coronavirus pandemic, explained Ramey, who oversees several outreach teams for Mental Health America of Los Angeles, a Long Beach–based organization that works across several nearby cities.

In this case, the system worked, Ramey said. The sick man agreed to go. He eventually tested negative for the coronavirus and recovered from his symptoms at a quarantine and isolation site the County of Los Angeles set up at Dockweiler State Beach.

From there, the county moved him to a motel room, hoping to keep him sheltered and safe from the coronavirus, according to Ramey.

This man’s case illustrates the lightning-quick shift in priorities the pandemic has forced on local governments and outreach organizations, according to local advocates.

Already responding to a dire situation, homeless-services workers are now on high alert trying to avert an outbreak that could devastate the already vulnerable population they serve. 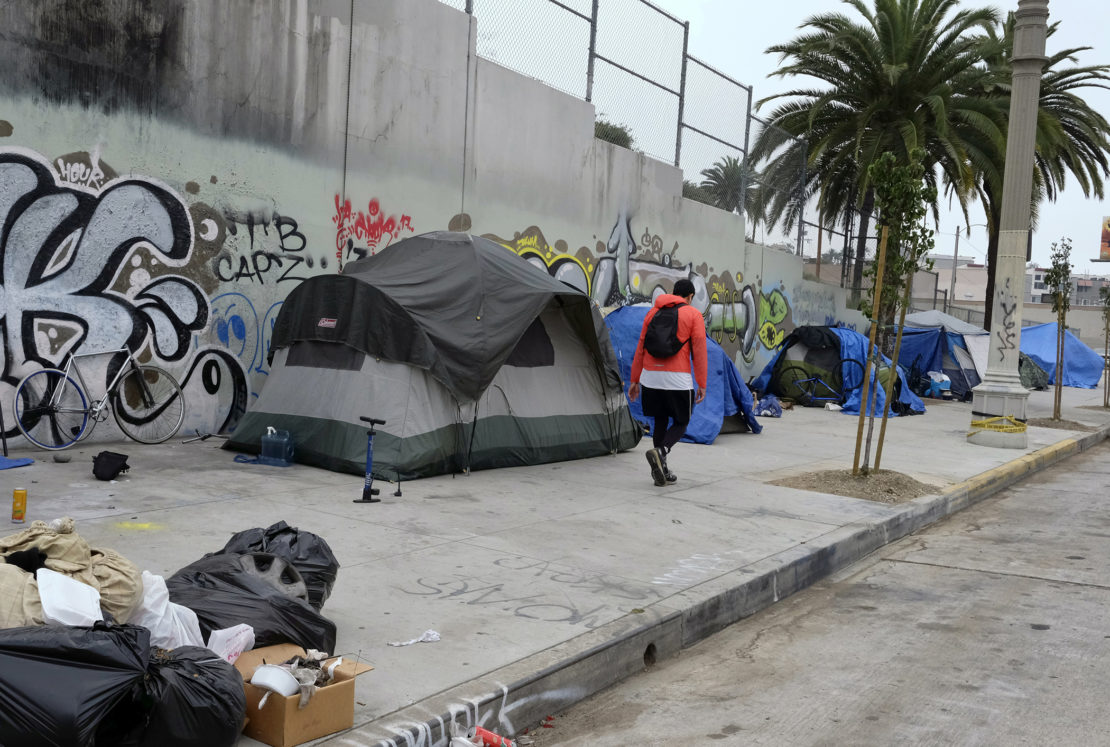 A pedestrian walks past a homeless encampment alongside a street in downtown Los Angles. AP Photo by Richard Vogel.

Now, instead focusing on slowly building relationships with individuals and looking for long-term pathways for them to escape homelessness, outreach workers are triaging, Ramey said, often delivering food and hygiene items while constantly screening for symptoms.

“I always worry that people could get sick in a camp and nobody would come and find them,” Ramey said.

So far, only one of Long Beach’s 406 confirmed COVID-19 cases has been among its homeless population, which numbered about 1,894 at last count. Across Los Angeles County, there are at least 33 cases of homeless residents who’ve contracted the virus.

“I’m sure we have more; we just don’t know yet,” said Christina Miller, president and chief executive officer of Mental Health America of Los Angeles.

The homeless man who tested positive in Long Beach was living in his car and is now hospitalized in stable condition, according to city officials.

It’s not clear how the city discovered he was sick. Officials said he wasn’t previously connected to any homeless services in Long Beach, and it doesn’t appear he’d interacted with any other people experiencing homelessness locally.

Because many of them have little access to medical care and they are often living in difficult conditions, homeless residents are particularly vulnerable to the coronavirus.

To combat that, Long Beach is setting up hand-washing stations, trying to educate homeless residents about social distancing and covering the costs of rooms to quarantine or isolate those who need it.

“We are doing a lot, but a lot more is needed,” Garcia said.

Whether that urgency will continue after the pandemic remains to be seen. For now, Miller said she’s been able to avoid laying anyone off or cutting any programs. But she worries about what will happen to her funding after the health crisis gives way to an economic one, likely putting a big dent in revenue from local sales tax measures that cover homeless services.

At least for now, Long Beach is continuing to pour in resources. It’s opened up several emergency shelters, even though they are only about 60% full, Garcia said on Wednesday.

Although Miller said she’s been encouraged by the quick action, homeless residents were initially afraid to show up. Some thought they were more likely to be exposed in a shelter than on the street.

“They are scared,” Miller said, but she thinks education from outreach teams is slowly overcoming that.

Nevertheless, in North Long Beach, a team is still delivering essentials and is on high alert for coronavirus at the Dominguez Gap camp.

No matter their best efforts, outreach director Ramey said, some residents are staying put—including the 81-year-old woman—despite seeing one of their neighbors get sick.

“Even with all this going on, … she’s not wanting to leave her community,” Ramey said. “She feels safer there.”