Over 200 abortion-rights activists gathered on the steps of the Long Beach courthouse in Downtown Tuesday to denounce the Supreme Court’s leaked draft opinion to overturn Roe v. Wade.

Prior to the gathering at the courthouse, several activists spoke during the Long Beach City Council’s State Legislation Committee meeting to voice their concerns about the possible ruling that would overturn the historic decision that guaranteed abortion rights for women.

“[Young women] have been complacent because this is the way it’s always been,” Carol Roberts, 74, told the Post during the meeting. “But I hope this shocks them into action.”

Maria Mejia, 62, who also attended the meeting, said she has been fighting to preserve abortion rights since 1978 when she saw a graphic photo of Geraldine “Gerri” Santoro after an unsafe abortion resulted in her death. The police image, published in 1973, became a symbol for the abortion-rights movement. 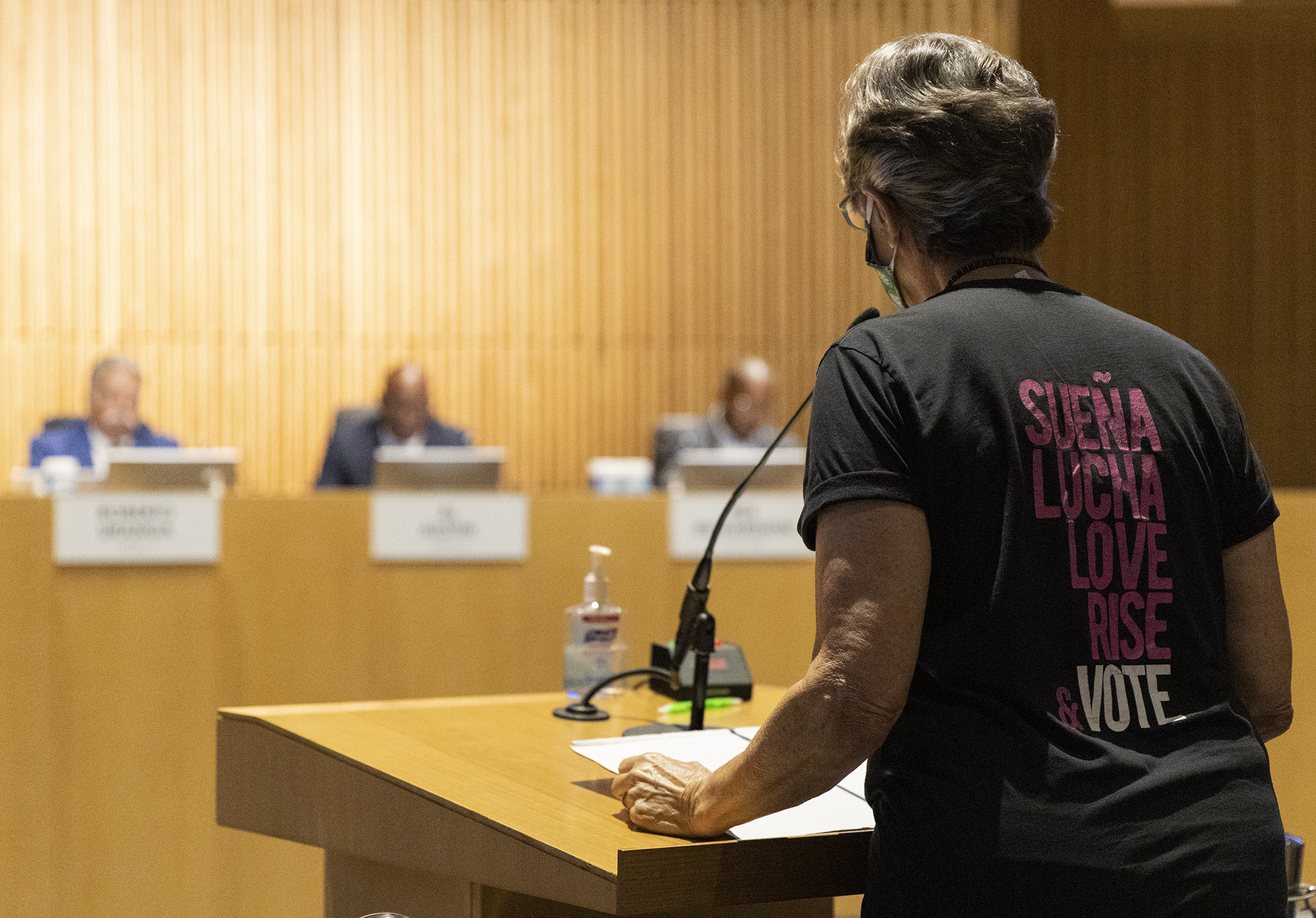 Pro-choice activist Ann Burdette, 71, urges the Long Beach City Council State Legislation Committee to work with the state to protect reproductive rights in California during a meeting Tuesday, May 3, 2022. Photo by Brandon Richardson.

The crowd on the steps of the courthouse was a mix of genders and ages ranging from children to seniors. The elder members of the crowd spoke about the exhaustion of having to continue to the fight for reproductive rights despite decades of effort, even after the Roe decision.

Speakers led the large crowd in various pro-choice chants in between speakers.

Black Lives Matter Long Beach organizer Sheila Bates said it is important to remember the fight for reproductive rights must be intersectional and include Black and other women of color as well as transgender men, and nonbinary and gender nonconforming people.

“We cannot and will not leave them out,” Bates said.

Over 100 people have gathered on the courthouse steps in Downtown Long Beach in protest of the Supreme Court’s leaked decision to overturn Roe v. Wade. @LongBeachPost pic.twitter.com/mYqQ9G8MNO

Chief Justice John Roberts confirmed the authenticity of the draft Tuesday and announced an investigation into the leak.

The revelation by Politico caused a nationwide stir from all sides—some celebrated the decision, while others lamented the stripping away of rights that have been ensured to women for nearly 50 years.

The decision is not official until announced by the courts.

The leaked draft comes as numerous Southern and Midwestern states continue to pass legislation that restrict abortion rights. Thirteen states have already enacted laws that would automatically ban all or nearly all abortions immediately upon a Supreme Court decision to overturn Roe v. Wade, according to the Guttmacher Institute, a think tank that focuses on reproductive rights. 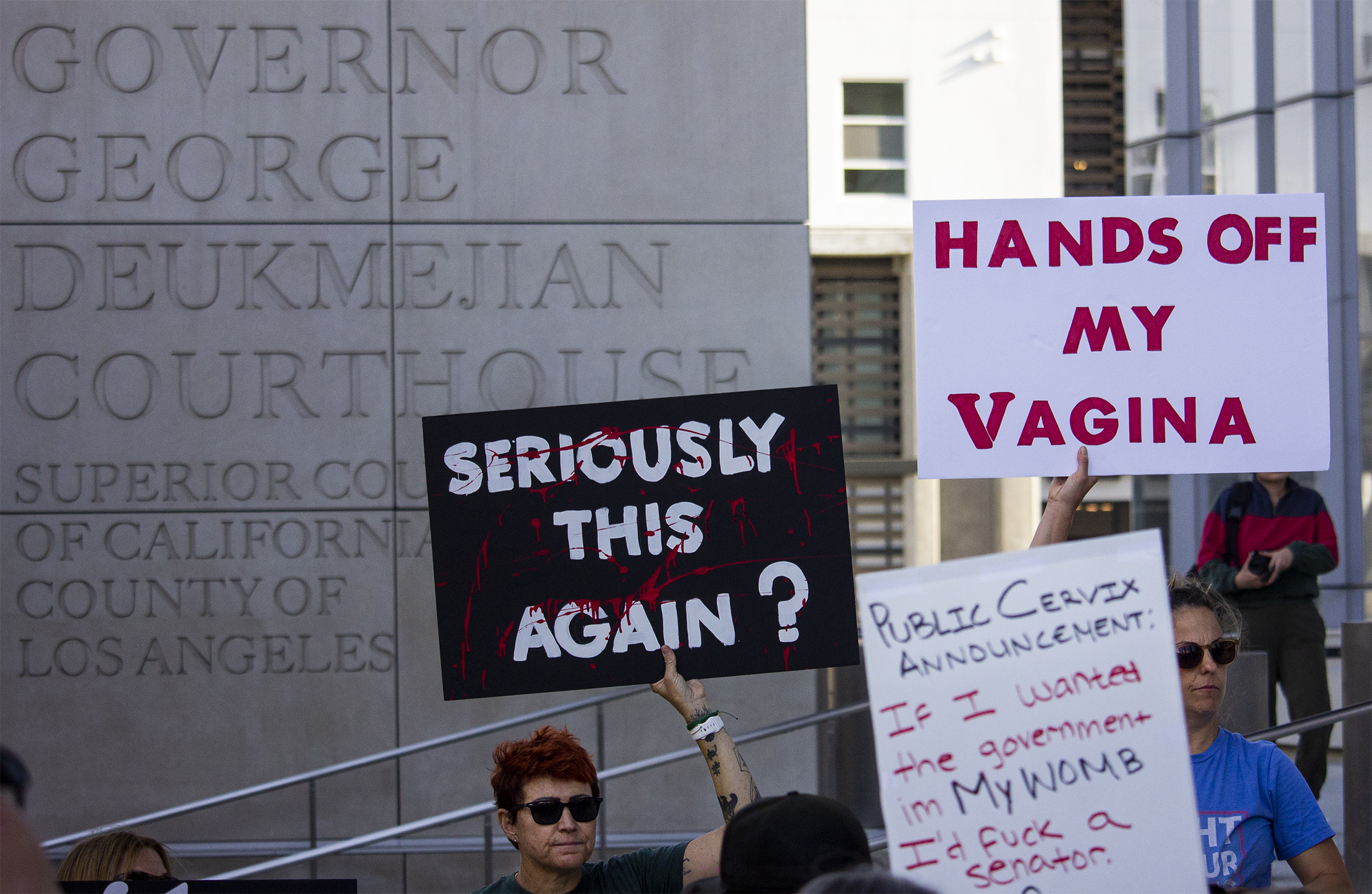 Activists hold up pro-choice sign outside the Long Beach courthouse in Downtown Tuesday, May 3, 2022. Photo by Brandon Richardson.

Long Beach’s Health and Human Services Director Kelly Colopy wrote in a Tuesday memo that the city’s Health Department has been working with LA County officials on a plan to ensure continued access to reproductive rights should Roe v. Wade be overturned.

“The Long Beach Health and Human Services Department (LBDHHS) stands in ardent support of women and their allies in ensuring that reproductive rights continue to be protected and prioritized,” Colopy wrote, “including access to the full scope of reproductive health services here in Long Beach.”

Local politicians also expressed their concerns about the draft opinion.

“With last night’s terrible news, I am more determined than ever to ensure Long Beach remains a safe, welcoming city that protects abortion rights and ensures each and every one of us has control over our bodies and our futures,” 3rd District Councilwoman and mayoral candidate Suzie Price said in a statement Tuesday.

“The potential Supreme Court decision to overturn Roe v. Wade will exacerbate the health and economic inequities that were exposed during pandemic,” 9th District Councilman Rex Richardson, who is also a mayoral candidate, said in an Instagram post Tuesday. “We need leaders at every level of government who will fight back and expand access to reproductive health services.”

In a string of tweets Tuesday, Mayor Robert Garcia said reproductive health is a constitutional right and warned that overturning Roe v. Wade would have devastating impacts on women nationwide and set a dangerous precedent that could result in the dismantling rights for the LGBTQ community and others.

“Let’s be crystal clear. This court and their extreme supporters will not stop until they strip away the right to marry for same-sex couples and destroy basic civil rights,” Garcia wrote. “We will work with advocates, our legislators and community leaders to adopt legislation and protections for women and those vulnerable to attacks by this court.” 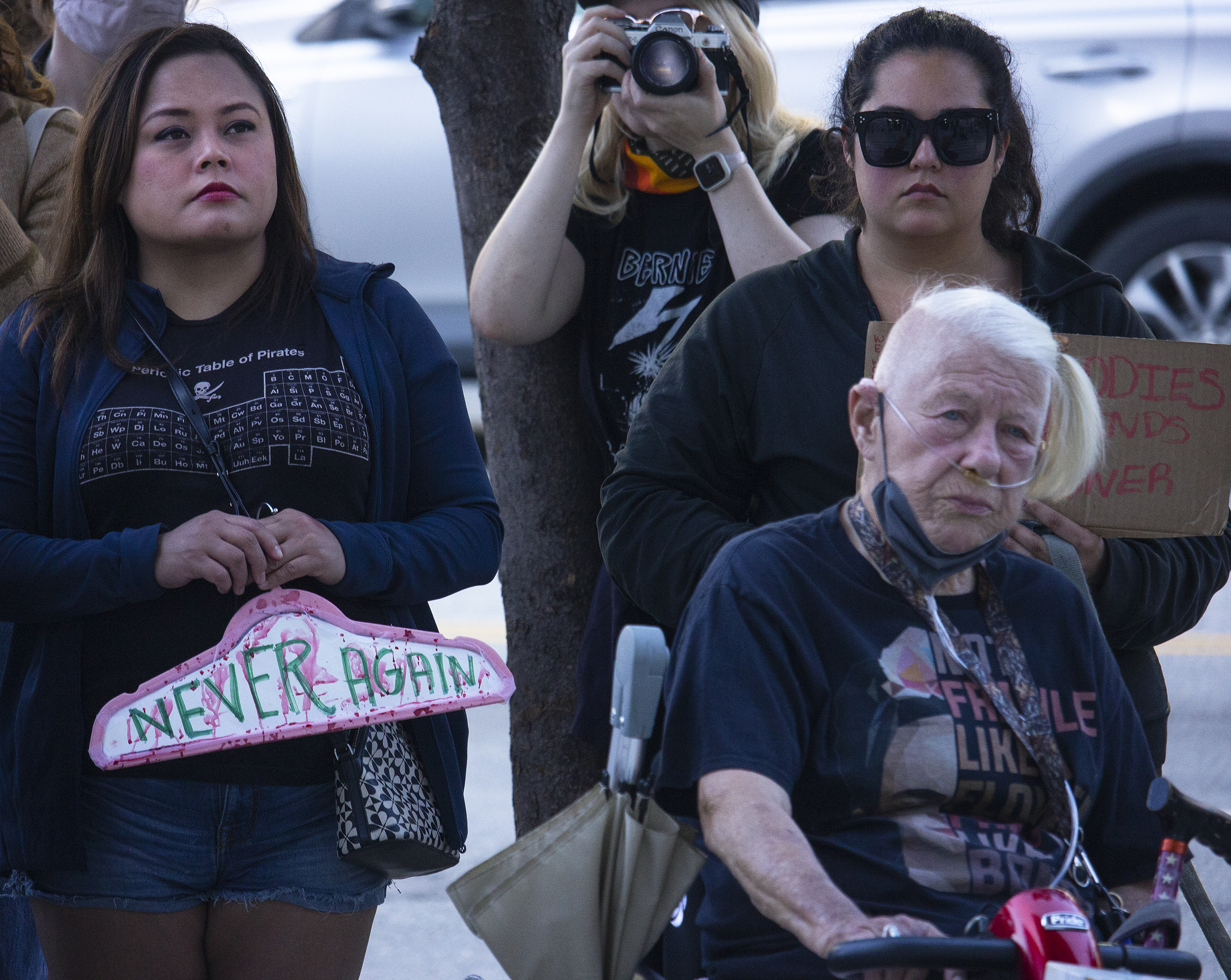 Pro-choice activists of all ages gathered on the steps of the Long Beach courthouse in Downtown Tuesday, May 3, 2022. Photo by Brandon Richardson. 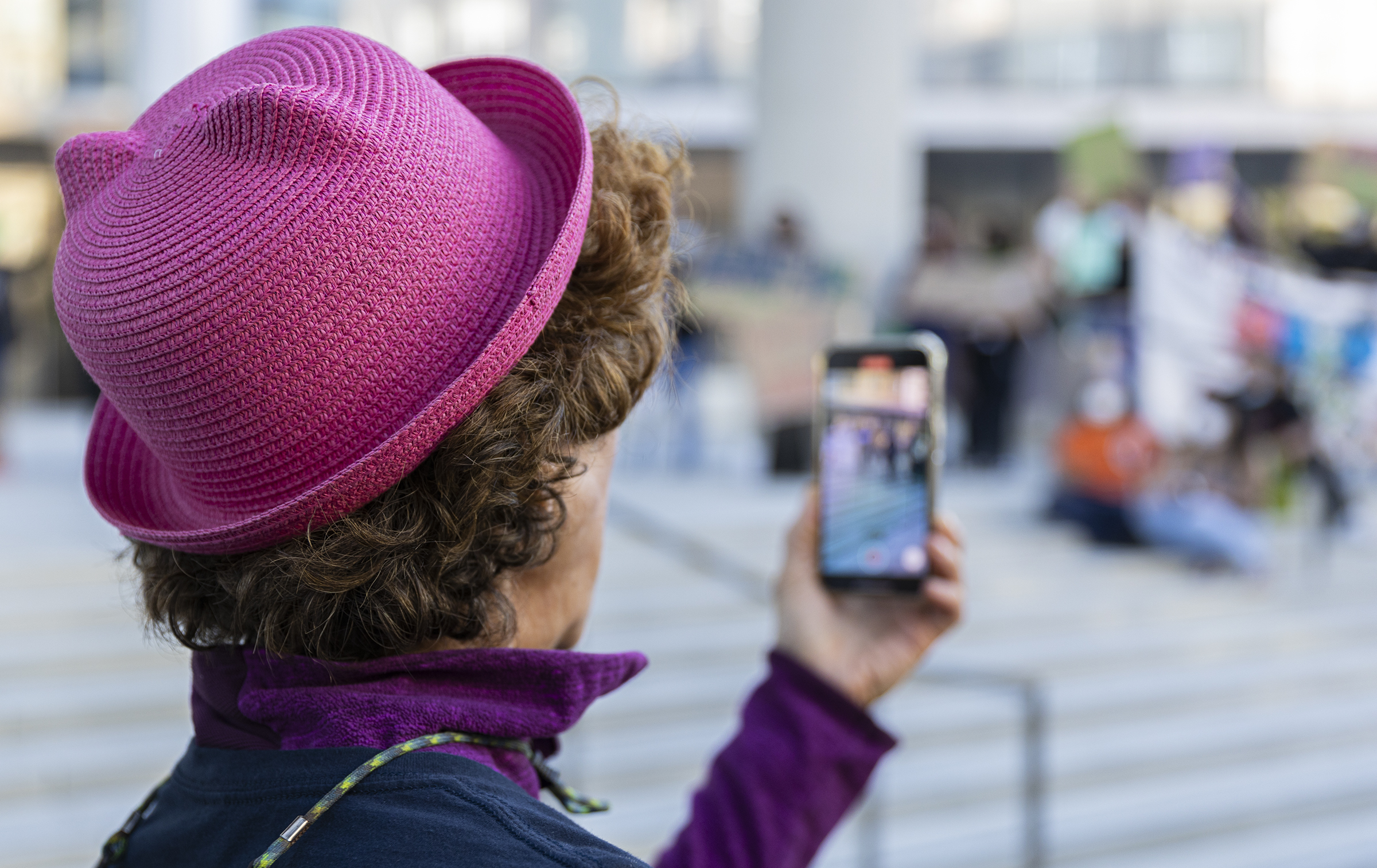 An activists wears a variation of a pink “pussyhat” during a rally in Downtown Long Beach against the Supreme Court’s leaked decision to overturn Roe v. Wade. Tuesday, May 3, 2022. Photo by Brandon Richardson.

Event organizer Jacqui Viale speaks to over 200 people during a pro-choice rally in Downtown Long Beach Tuesday, May 3, 2022. Photo by Brandon Richardson. 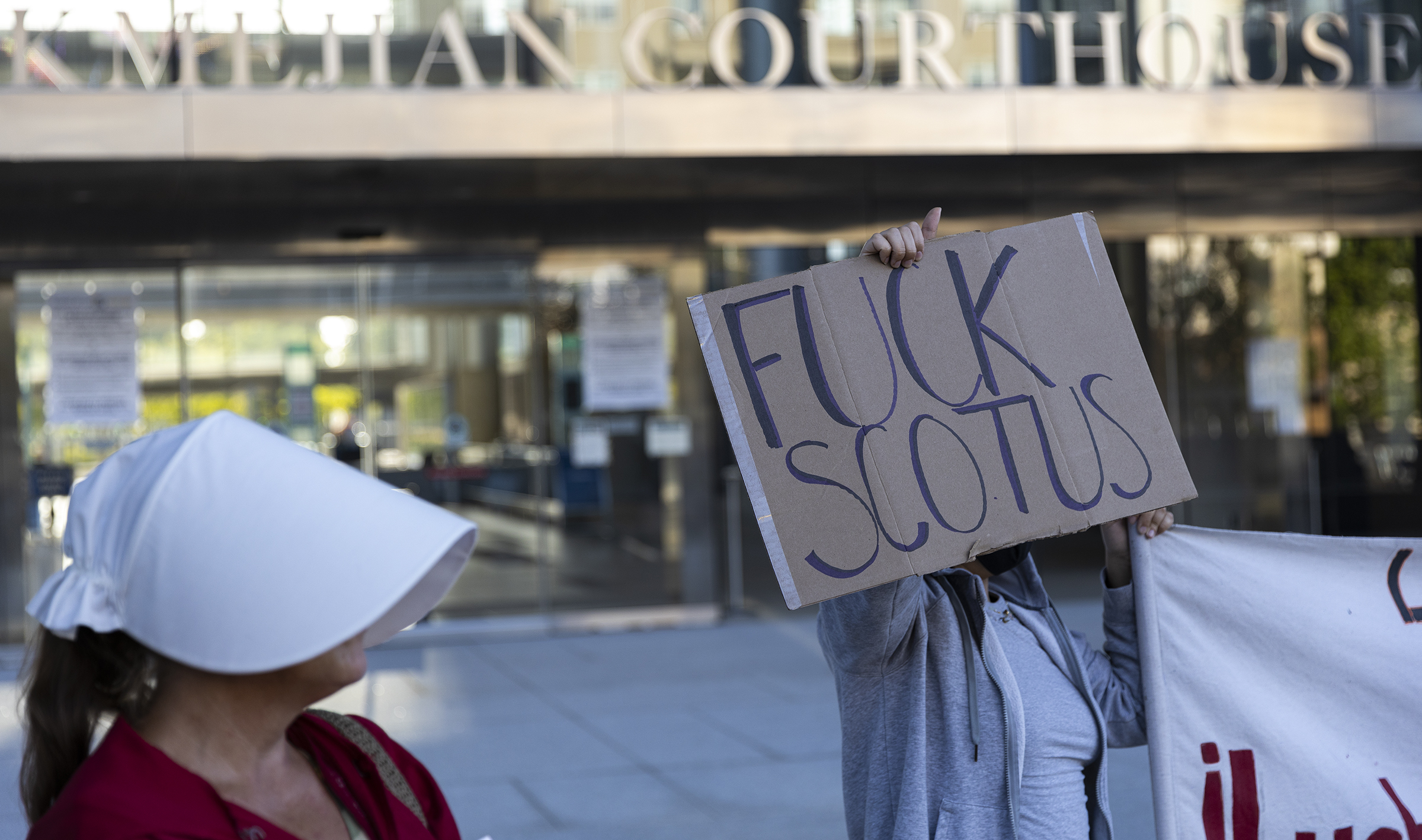 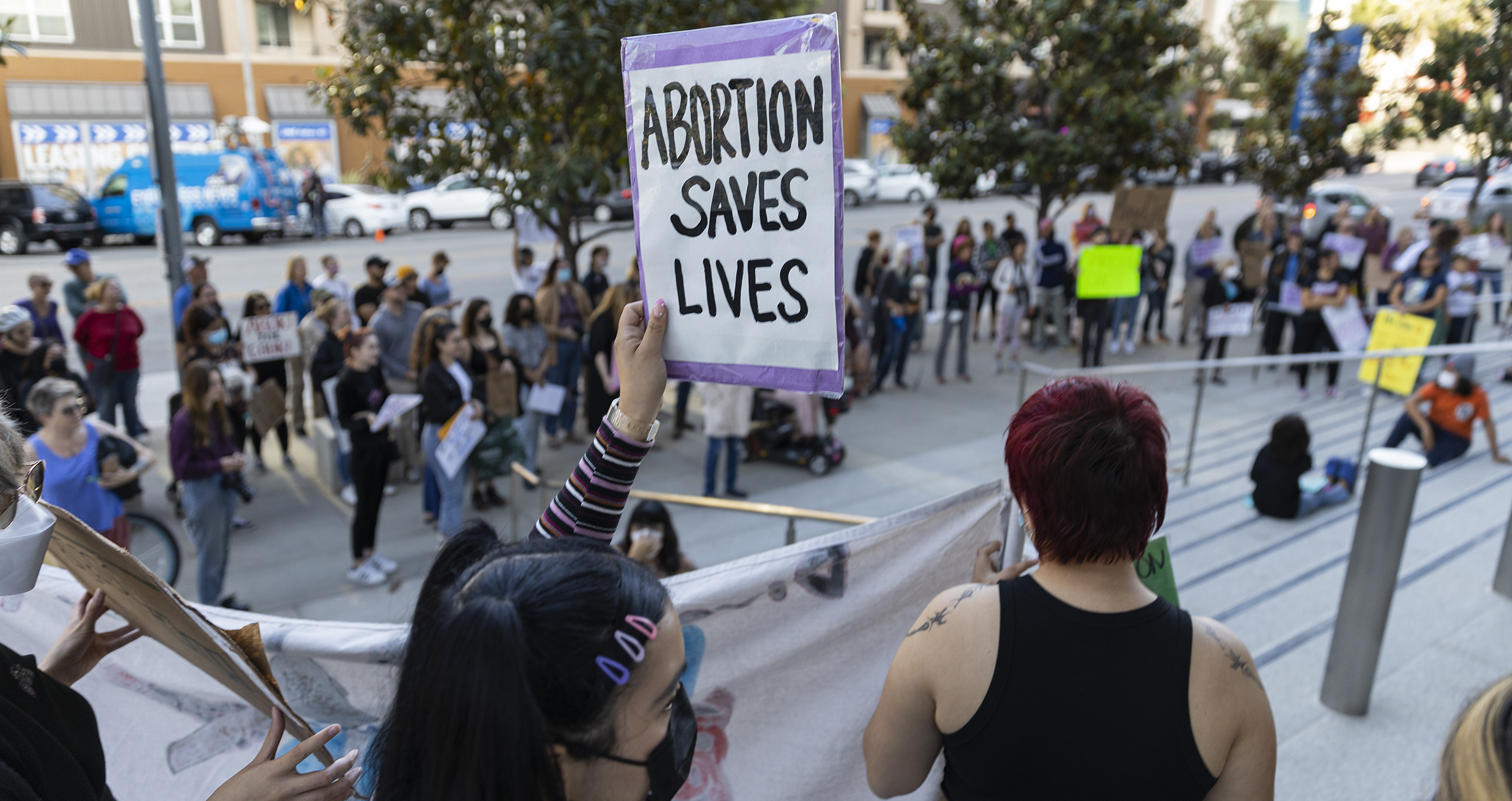 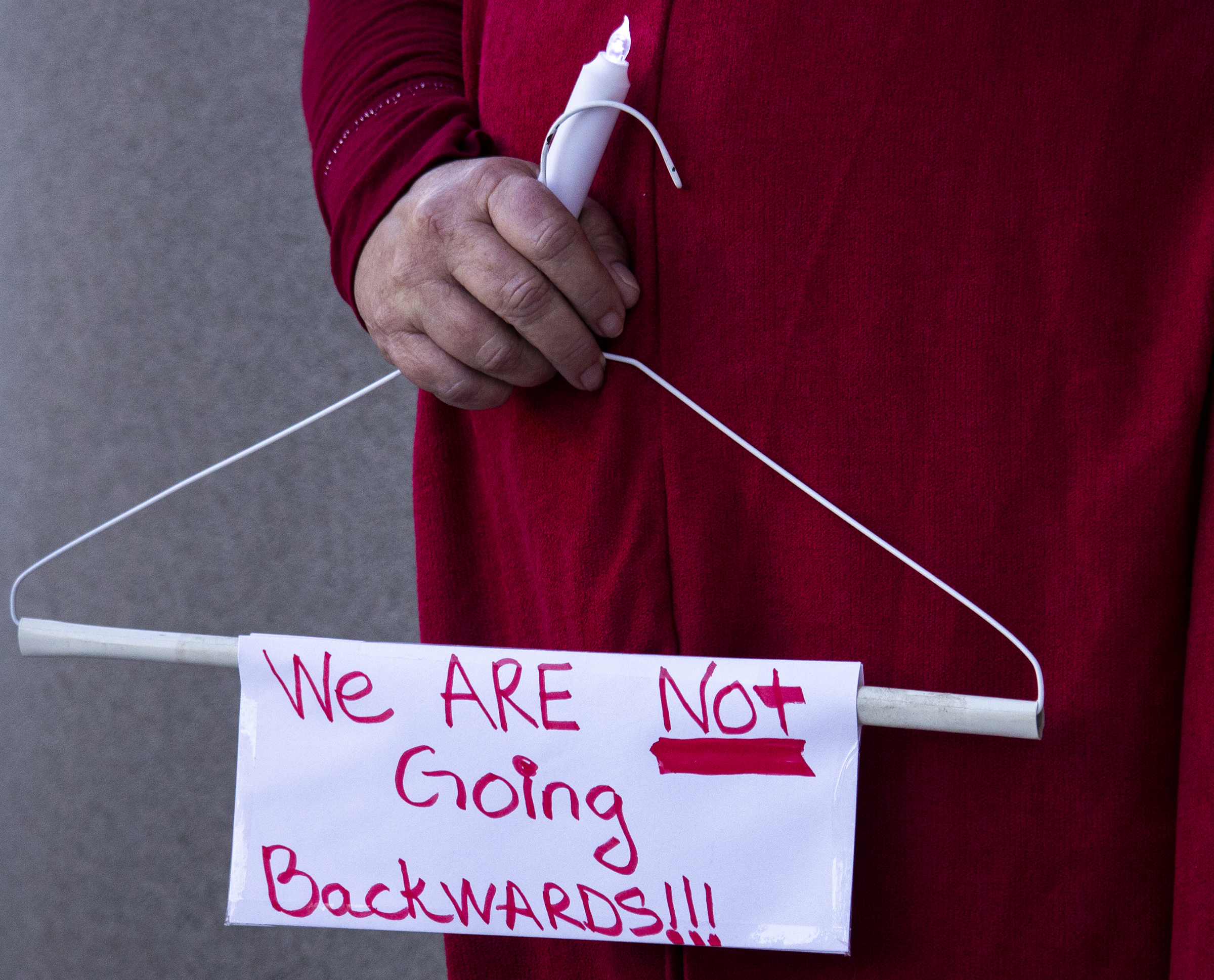