On Saturday at around 7 a.m., business owner Sarah Benton-Obando woke up to some bad news.

The owner of a nearby coffee shop called her to say that someone had shattered her glass door and burglarized her business, Lil Devils Boutique, a place where many parents buy niche merchandise for their babies and young children on Fourth Street’s Retro Row.

The burglars threw a rock through the window, took the cash register and damaged merchandise while forcing the entry, Benton-Obando said.

For someone to steal from a kids store, she said she felt “shocked” and “sad.”

“It’s hard times right now, and a lot of people are suffering,” said Benton-Obando, a Long Beach resident. “I’ve seen it happen to so many other people; it just catches you off guard when it happens to you.”

The Long Beach Police Department said that they arrived at the store about an hour after the incident and observed the damages. Police are investigating the incident, and there is no information on the suspect(s).

Despite the pandemic and burglary, Benton-Obando remained open for business, but she had already been going through hardships after both of her 87-year-old paternal grandparents died in a two-week period this year. After losing her grandparents, Long Beach residents, the weekend’s burglary has made it hard to cope.

Luckily, she said, less than $1,000 was stolen from the register, but the cost of repairs is over $3,000. In response, fellow business owner Nicole Sloan, of Drawings by Nicole, a store for “weird moms” that sells grunge merchandise, started a GoFundMe page to help cover costs. 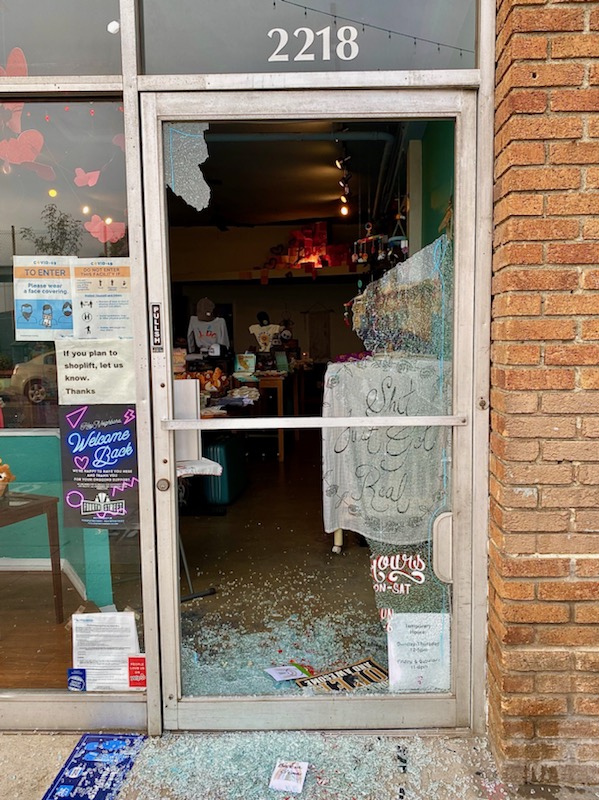 Sloan wrote on the page about the boutique:

“They are a staple in Downtown Long Beach,” she wrote. “Now, it’s time for us to return the favor.”

Lil Devils has been the place for children’s merchandise for the past 13 years. Some of Benton-Obando’s best-selling items include A-B-C books themed around rock ’n’ roll bands, like the Ramones, or baby shirts of Snoop Dogg or the Wu-Tang Clan.

Benton-Obando’s idea for this business came after quitting her job in the Paramount Unified School District teaching middle school student history. While working there, she curated merchandise for parents’ kids. She always wanted to work with younger kids—elementary students—but it never happened, so it was natural for her to start Lil Devils after that, where she had the chance to interact with younger ones every day.

“The cool thing about having a kids store is watching the kids grow up,” she said about many returning parents whose children are now in their teens.

Saturday morning, Benton-Obando posted on social media about the burglary and her grandparents, and a few people showed up to sweep the shattered glass. Hundreds more commented and sent messages to console Benton-Obando for her hardships.

“It definitely brought up my spirits,” she said. “[Long Beach] just feels like this small home town with people that just care about each other.”