'To hell with the governor': Iconix gym owner hosts yoga in violation of health orders • Long Beach Post News
- ADVERTISEMENT -
Help us light up the city; Add your home to the 2022 Holiday Lights map. CLICK HERE

The oceanfront business has not officially reopened, but owner Kurt Schneiter said the session was an experiment to prove that Iconix can safely accommodate members again soon. He plans to roll out limited outdoor sessions and will continue to offer online workouts.

“The best vaccine we have right now for COVID-19 is to stay in shape,” Schneiter said. “For us to be trapped in our houses not moving is crazy.”

Mayor Robert Garcia, Gov. Gavin Newsom and county health officials have been emphatic over the past two months about the threat posed by COVID-19, and have implored residents to stay at home to prevent the spread of the virus. The city as of Saturday reported 1,271 positive cases and 51 deaths.

Long Beach Police Department Chief Robert Luna said in late April that the city had cited at least one business for operating illegally, a smoke shop in North Long Beach. Police and health officials have said they would rather educate the public than issue citations.

City officials did not say Saturday whether they were aware of the class at Iconix.

“Any reports of businesses in possible violation of the health orders will be thoroughly reviewed and proper enforcement action may be taken,” according to a statement from Long Beach’s Joint Information Center.

Officials emphasized that efforts will be made to “gain voluntary compliance, however, if businesses fail to comply, administrative penalties and/or a misdemeanor citation may be issued.”

Several other gyms in Southern California also are reportedly operating despite local health orders; one such gym owner in Oceanside was arrested last week for reopening his business, which he reopened again after his release.

Even though participants were kept 8 feet apart on mats sanitized with hospital-grade cleaning agent, Schneiter acknowledged that opening the gym for the yoga class went against California’s stay-at-home orders, which classify gyms and fitness studios as higher-risk businesses that aren’t permitted to reopen until Phase 3 of the recovery plan (the state is in Phase 2).

“To hell with the governor,” said Schneiter, who closed Iconix, formerly known as Olympix, on March 16 in accordance with city health orders. “My industry of fitness is being stigmatized, and we want to show that this can be done right, that it can be safe.”

Schneiter was joined in support Saturday by former Long Beach Councilman Gary DeLong, who represented the Belmont Shore area, and Randy Gordon, president and CEO of the Chamber of Commerce.

“I’m not a bit worried,” DeLong said when asked if he had any fears about the safety of the class. “I think the government has completely overreacted. There’s a lack of common sense.”

Schneiter said he takes COVID-19 very seriously. One of his four daughters, he said, contracted the virus.

He said he’s taken measures to protect the 90 employees at the gym, and he’s hosted blood drives to help in relief efforts.

He said it’s possible to innovate and open businesses safely.

“We’ve been a little bit like sheep, but the name of my firm is Maverick Investments and there’s a reason for that,” he said. “Adults can act as adults, and there are so many ways to do this in a healthy way.” 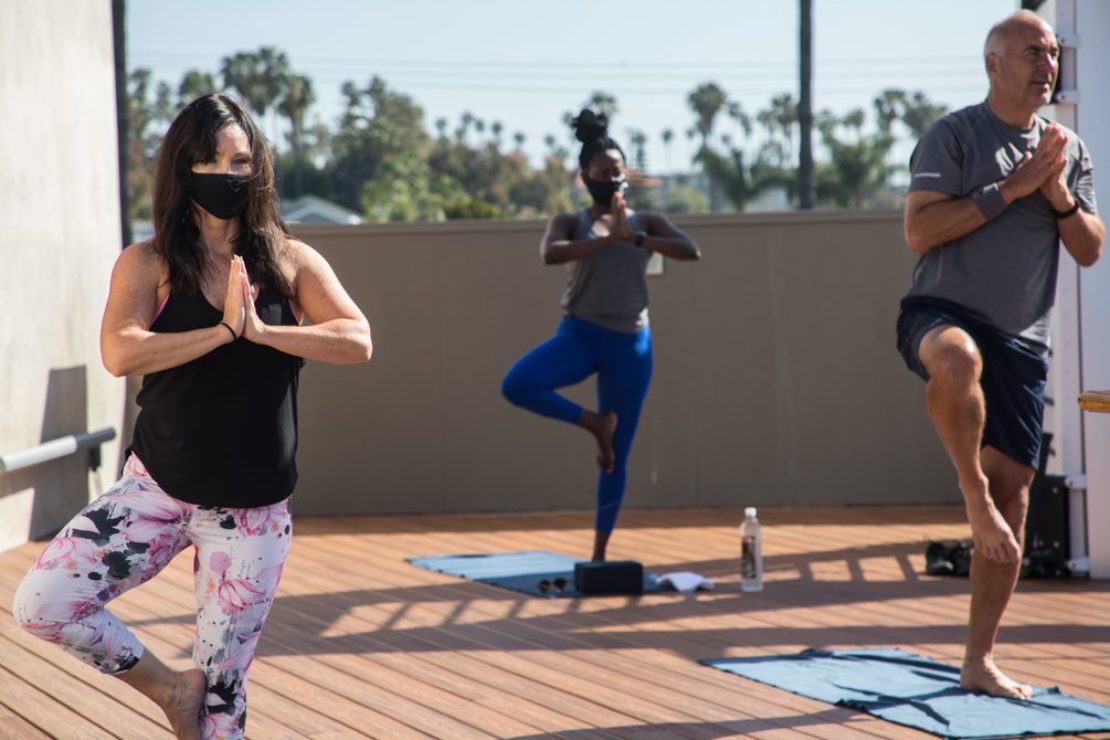 Garcia, however, has said repeatedly that the city cannot do anything that the state won’t allow. The city has allowed the reopening of retail businesses for curbside pickup and restaurants for delivery only.

“We can’t move faster than the state allows,” Garcia said at his Friday press briefing. “Even if we thought we do so safely, we can’t.”

The city, along with the state, is moving slowly so that officials can see the impact of reopenings on various health indicators, particularly the hospitalization rate.

“These decisions aren’t being made because we feel like it,” the mayor said Friday. “They’re being made based off the advice of the best medical professionals in country and the state.”

For Schneiter and his partner Jarrett Tooley, hosting free group exercises isn’t about getting Iconix reopen again so much it’s about doing what’s right for the community and other small businesses, which they said may never recover.

“We aren’t trying to generate revenue, we are starting a discussion and building a plan to move forward safety and sensibly,” Schneiter said. “We want to do this in a way that brings people hope.”