President Joe Biden made the announcement on TV Tuesday that everyone knew was coming: “The war in Afghanistan is now over.”

A group of people watching the address on CNN in a backyard in Alamitos Heights cheered and applauded; it was the gathering’s first audible reaction to Biden’s speech, though there had been nods of agreement from the mostly quiet viewers.

There were about a dozen such people gathered on the backyard patio of Pat Alviso and Jeff Merrick at around 1 p.m. Tuesday to watch the president’s speech. The mood was somewhat somber, but tinged with relief that this two-decade conflict was, however problematically, coming to an end. 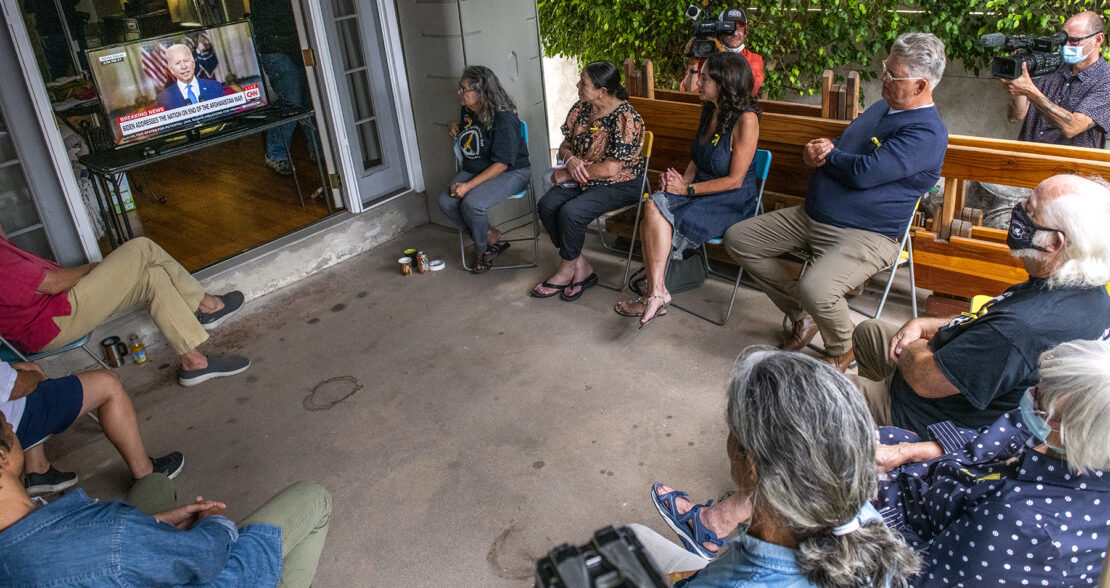 A group gathers at a home to watch a speech by President Joe Biden on the ending of the war in Afghanistan in Long Beach Tuesday, August 31, 2021. Photo by Thomas R. Cordova.

Mike Prysner was an Army corporal during the 2003 invasion of Iraq and begrudgingly gave Biden credit for admitting defeat and ending the war in Afghanistan.

“We could have ended the war in a month, but the military and contractors wanted it go on,” he said. “The generals and Washington lied to us. They lied about the weapons of mass destruction and they lied to us about bringing democracy to the area. Most of us there in Iraq just wondered why in the hell were we there.”

“But I’ll give Biden credit: No president had the courage in 20 years to be the one on whose watch we lost to Afghanistan. They just kicked the can along to the next president, so I commend Biden for taking the defeat and finally ending it. And I appreciate the fact that he talked about the expense of the war—$300 million a day for 20 years. … Now that the war is over, where is that money going? Is it going to fix infrastructure? Fix the epidemic? Fix mass evictions? Provide jobs?”

It was a rhetorical question. It’s not going to fix anything, Prysner said. It’s going to make rich people, particularly those who profit from war, richer.

Melissa Brunicardi and her mother Carrie Rodriguez were clearly touched by many of Biden’s remarks, keeping handkerchiefs close at hand to clear tears from their eyes.

Brunicardi’s son (and Rodriguez’s grandson) is serving in the 82nd Airborne Division under the command of Maj. Gen. Christopher Donahue, the last soldier to leave Afghanistan.

The women didn’t want to divulge his name, but his mother said he was one of the “first boots on the ground” at Kabul’s international airport to assist with the evacuation of troops and civilians.

Although he had left the area before the Aug. 25 suicide bombing at the airport that killed 60 Afghanis and 13 U.S. troops, the women didn’t know he was safe and, of course, worried in agony until they finally heard from him days later.

Meanwhile, her grandson is still overseas, though presumably far away from the ongoing dangers of Afghanistan.

“I’m not as worried about him now as I was when he was in Afghanistan, but I’m still worried,” said Rodriguez.