Travis McIntosh sits in a metal folding chair to the right of his attorney as a judge calls his case.

“Are we ready?” Judge Laurie Behar asks, her image filling a large television monitor in the front of the room.

The prosecutor and his public defender have already worked behind the scenes on an agreement to dismiss the charge against McIntosh, a misdemeanor for possession of drug paraphernalia. The attorneys tell the judge that McIntosh is connected to a case manager and is now off the streets and living at a temporary shelter, the Hyland Motel.

McIntosh raises his hand and the judge addresses him directly, congratulating him for his progress. The judge, attorneys and two staff members give him a muted round of applause. He is free to go, making his way to a stack of sandwiches on a nearby table, courtesy of the prosecutor’s office.

The casual proceedings take place at the city’s Multi-Service Center on the Westside—Long Beach’s hub for homeless support services—in a room that serves as a work training lab, meeting space and, on the third Wednesday of the month, a courtroom. 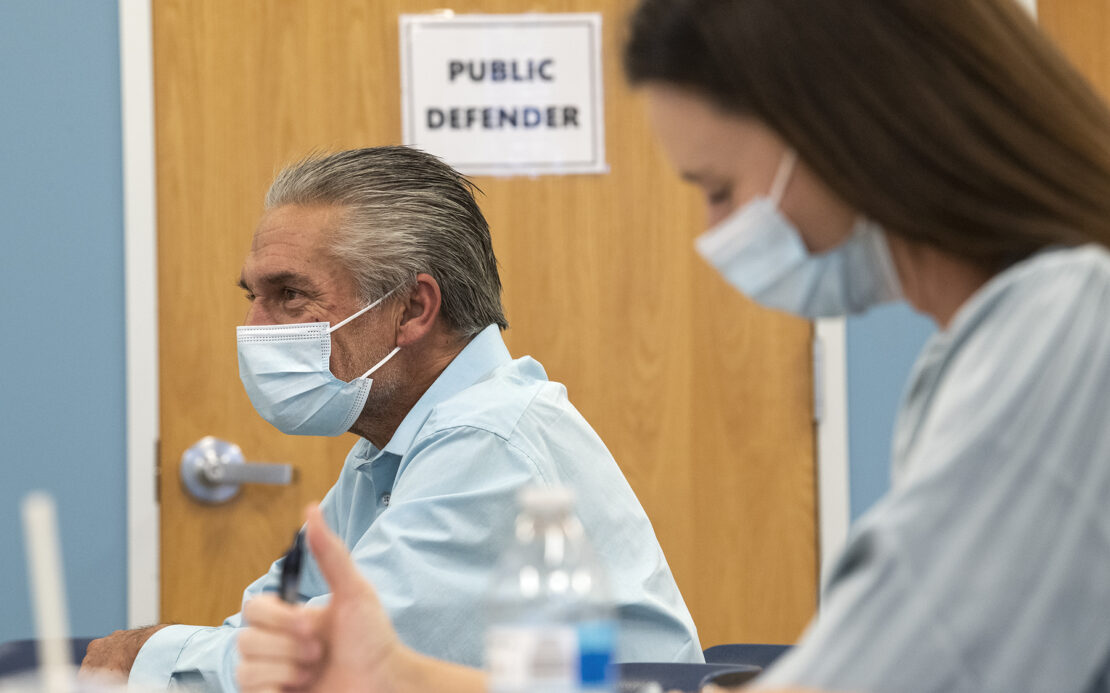 More than 200 cases have been adjudicated here since July 2021 when the city began a pilot program called homeless court. Only misdemeanors and infractions can be resolved in this setting, and the crimes must generally be a direct result of the person being homeless.

The goal is to give people a chance to get out of the cycle of infractions and arrests that turn into bench warrants due to missed court dates and an inability to pay escalating fines. This cycle can significantly hinder a person who is trying to get a job or an apartment, and clogs up an already overwhelmed judicial system.

“I view homeless court as one of several things that are desperately needed to improve the way we handle cases, not just in Long Beach, but throughout California,” says City Prosecutor Doug Haubert, noting that homelessness and the criminal justice system are deeply entwined.

Beyond tracking how many cases and defendants have appeared, however, Long Beach does not keep data on how many of these individuals have found permanent housing or whether any homeless court defendants have committed new crimes since having their records cleared.

Officials said they plan to look at recidivism rates, and whether a person has remained in housing, at the program’s two-year mark, when more time has passed and there is a larger pool of participants to better gauge its effectiveness.

Still, even without those statistical measures, Haubert calls the program a success. The program, he said, is a powerful incentive for people to get help, and gives a needed boost to those who are already seeking help.

Only those who are connected to services are eligible to appear in the Long Beach homeless court, with cases typically referred through social workers, law enforcement, judges and case managers at the Multi-Service Center.

The applause McIntosh received, he says, may seem small, “but even that makes a difference.”

This is McIntosh’s first time in homeless court, but not the first time he has sought services to help him get off the street.

Twice the city has placed him in motels with vouchers to cover the cost, but he admits he broke the rules and was kicked out of the temporary housing, winding up homeless again.

The homeless court does not require him to take drug tests or adhere to any requirements to maintain his temporary housing, or to get his record cleared. Asked whether he hopes to make  it into permanent housing this time, he pauses, and nods yes.

McIntosh doesn’t know where or how he’ll find housing, but that is his goal—and to work, he said, so he doesn’t have to sell drugs for income.

“Everyone here has been helpful,” he says of the Multi-Service Center. Regarding his criminal charge: “It’s a relief to get that cleared up. It feels good, like a fresh start.”

There are more than 450 homeless courts across 19 counties in California. But with no statewide coordination, their aims and outcomes might be vastly different.

Some homeless courts have much stricter requirements and are more interwoven with social services than Long Beach.

In contrast to Long Beach, for example, the city of Redondo Beach requires participants to find permanent housing before they can have their cases resolved and officially “graduate” from the program, says Lila Omura, a homeless housing navigator for Redondo Beach.

“I don’t see how a program can be effective if they’re just getting their records expunged with no incentives,” she says. 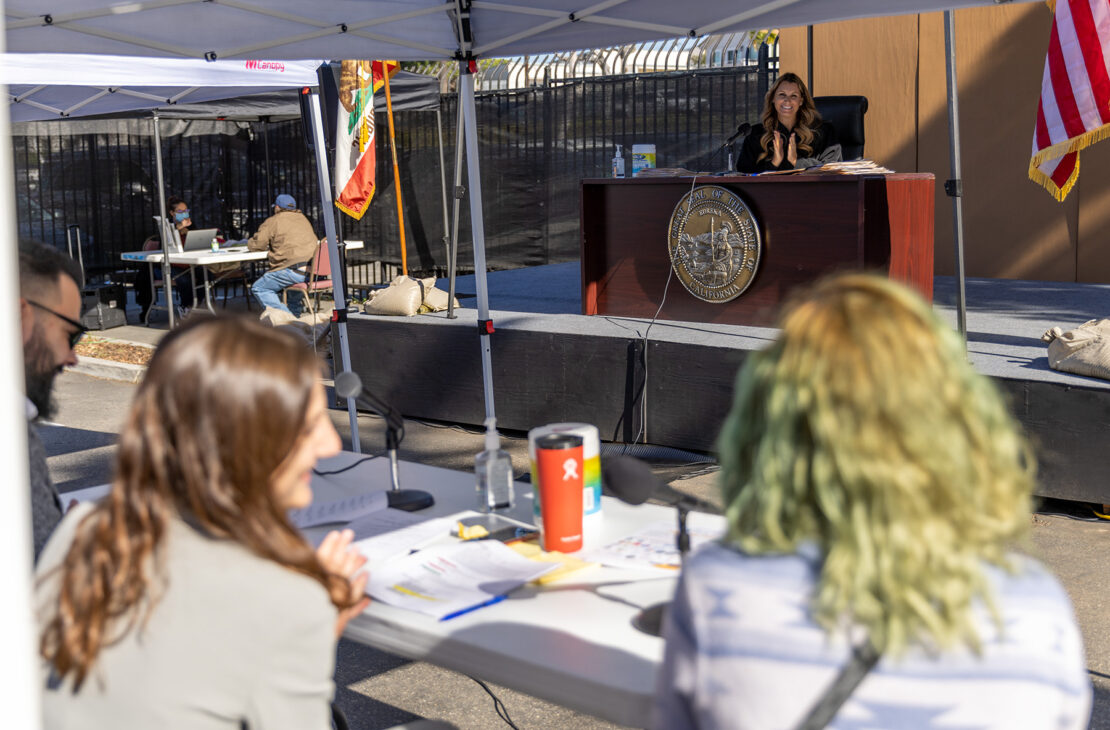 Of the 99 people who have appeared in the South Bay court since 2019, 34 have been placed in some form of interim housing and 33 have been permanently housed, Redondo Beach Deputy City Prosecutor Joy Abaquin says. So far this year, 14 people have graduated from homeless court.

The South Bay court deals with fewer cases, and known repeat offenders, with the goal of targeting the most serious cases, officials say. Along with an outdoor court, held in a park, there’s an organized network of job counselors, advocacy organizations, legal teams, mental health and drug counselors and housing assistance groups on hand.

In Long Beach, defendants can access other services at the Multi-Service Center but those are not coordinated with the court. On the same day as the judicial proceedings, officials from the county public defender’s office are also available at the center to help people expunge old felonies and smaller tickets—but those are handled through separate processes.

During a recent homeless court session, some two dozen people had shown up for their turn before the judge. One of them was Jefferson, a 54-year-old man who declined to give a reporter his last name after his appearance.

He says he has been homeless on and off since 2014, after losing his job at Home Depot. He’s most recently been staying at a friend’s house in Bellflower.

Jefferson says he was at homeless court to try to clear an old charge of driving on a suspended license. He says the judge ordered that he be connected to a case manager and report to the next court session for more information on having his record cleared.

He says he hopes the process can eventually lead to a home. “I guess every little step helps,” he says.

According to the U.S. Interagency Council on Homelessness, about 48,000 people per year who enter homeless shelters come directly from prisons or jails, and as many as 15% of people who are incarcerated have reported experiencing homelessness.

Homeless courts in larger jurisdictions like Los Angeles, Santa Monica and Long Beach tend to deal with more infractions and an overall higher volume of cases. In Los Angeles, mobile clinics also drive to parks and other areas to help expunge old convictions and citations.

A 2021 report from the Judicial Council of California said the programs are cost effective because they reduce the overall number of court appearances. The report said courts should consider expanding eligibility beyond infractions, warrants and low-level misdemeanors to include more serious offenses, when appropriate.

In Long Beach, where homelessness has spiked 62% since 2020, officials believe that removing some barriers for the unhoused will make a difference in getting them off the streets. 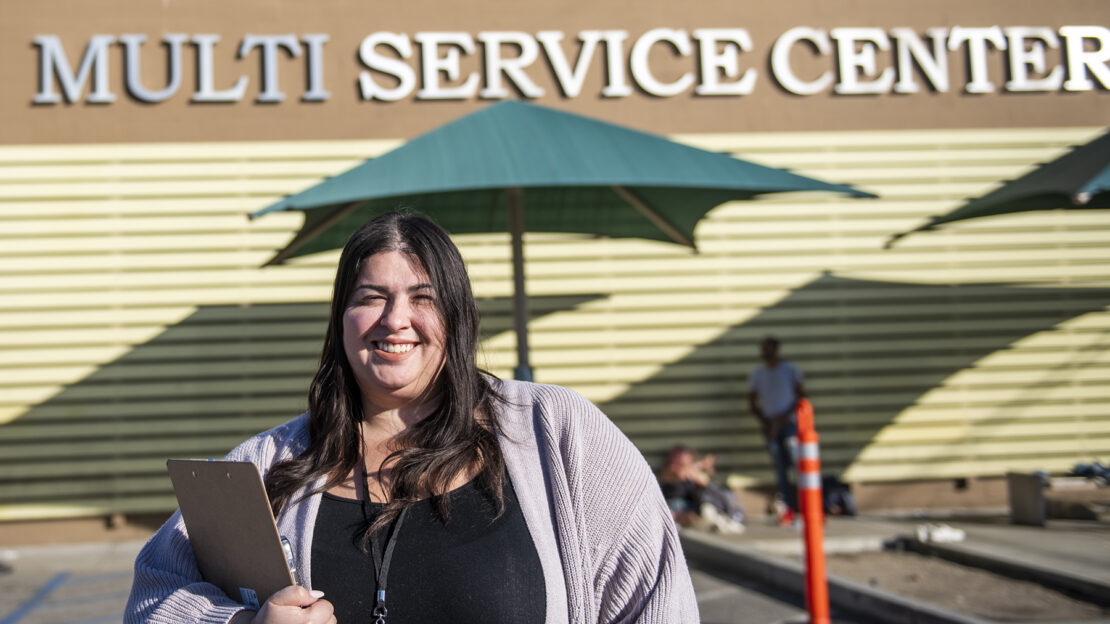 Although there are no court-ordered mandates for participants to find housing, Long Beach social service agencies review each case individually to determine what’s needed for success, says Glareh Zanganeh, a social worker and coordinator for the city’s program.

Should someone have a suspended license, for example, their case can be closed when they get it restored. Or, if the person has a ticket for illegal camping or property damage, the case can be resolved when the individual finds shelter, even temporary, and connects with a case manager.

Often the judge and attorneys will continue a case for months to ensure the person is heading in the right direction and getting services.

Anthony Smith, 66, was waiting on a recent Wednesday to get information from the public defender’s office about expunging a felony from 49 years ago, he says. His criminal past, he explains, has been an obstacle to finding jobs and housing.

“This has followed me for the longest time,” Smith says.

Smith says he became homeless after leaving his job as a supervisor at the Long Beach maintenance yard just before the COVID pandemic. At the time he was having medical issues, including suffering a back injury and being diagnosed with Type 2 diabetes.

He began living in his car in the parking lot of the Multi-Service Center as part of its “safe parking program” and recently got a bunk at the city’s congregate shelter in North Long Beach. He hopes to find an apartment, and start working again, soon.

“I want to get my life back,” he says, welling up with tears.