Hughes, 24, said cops have stopped him many times over the years in front of his own home. He says residents sometimes eye him suspiciously while he’s walking down the street, even though his family has lived in the neighborhood for decades and is well known in the Long Beach community.

His father Lindsay Hughes, a businessman from Watts, started out mopping floors at a McDonald’s and went on to own two franchises. He is a founding board member of the Long Beach Ronald McDonald House.

“I’ve lived here my whole life and it hurts that sometimes I’m made to feel not welcome in my own neighborhood,” Alexander Hughes said. “I guess I look out of place in their eyes.”

While normally peaceful, a battle has been quietly raging in Los Cerritos since the beginning of the year over the push to have private security patrol the area in addition to Long Beach police.

Proponents say private security is desperately needed to help fight an increase in crime. Others say it will add another level of racial profiling in a neighborhood that has long had issues with people of color being unfairly targeted.

The debate has spilled into comments on Facebook and Nextdoor that have often turned contentious.

“It’s been heated at times, but because of (COVID-19) we haven’t been able to call meetings so it’s difficult to tell exactly how many are strongly against it or for it,” said Bob Gill, president of the Los Cerritos Neighborhood Association, which is not directly involved in the effort because it is a nonprofit.

In some ways, the division in Los Cerritos is microcosm of larger issues as the country faces racial tension and mass police brutality protests in the wake of George Floyd’s death in Minneapolis this year. Some are demanding more law and order, while others are calling for defunding the police and investing in communities.

Like in many parts of Long Beach, Alexander Hughes said his neighborhood is becoming more diverse. Longtime residents, he said, should change their views with the times.

“There’s no need for extra police; it’s just a bunch of older white people who are more scared of me than I am of them,” he said. 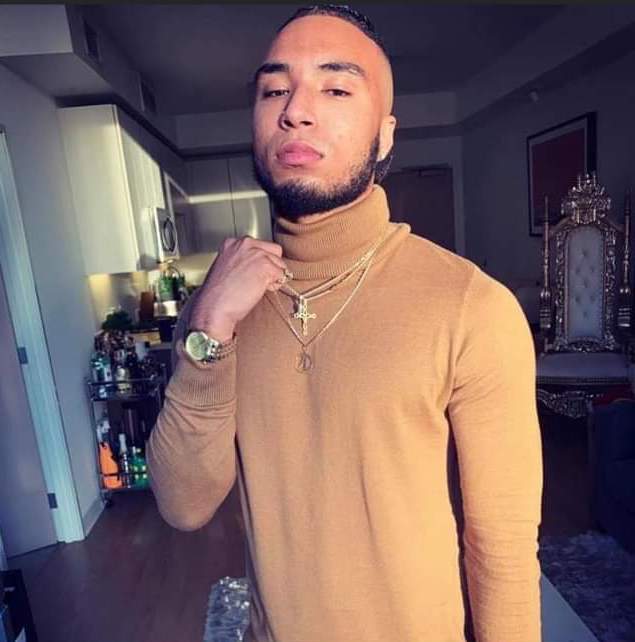 Alexander Hughes, 24, grew up in the Los Cerritos neighborhood.

Other neighbors see it differently.

Several residents who spoke with the Post in support of private security patrols declined to give their names, saying they feared for their safety.

The resident who started the effort said he began looking for private security firms in January after being fed up with an increase in home break-ins, garage burglaries, bikes thefts and other property crime.

The resident, who asked not to give his name, said he put the question on social media and got positive responses from more than 200 neighbors. Some were willing to pitch in for the cost to cover the entire area.

Los Cerritos, which has some gated sections, consists of about 700 homes and 2,000 residents. The plan was to have a security guard patrol at night and report any suspicious activity to police.

“A lot of people want this,” he said. “Long Beach Police can’t be everywhere all the time.”

The resident said he reached a tentative deal with Long Beach-based CSI Patrol Services to do a test run in June. He was met with backlash from neighbors who didn’t want the security near their homes.

Amy Valenzuela-Mier and her wife Lorri have been two of the most vocal residents against the effort, launching a Facebook group called Keep Los Cerritos Safe, which has more than 60 members.

Valenzuela-Mier, who has three adopted children of color, said she was immediately concerned for her two sons, who have both experienced racial profiling issues in the neighborhood. The extra security is unnecessary since the area’s crime rates are very low, she added.

“We’re an extremely safe neighborhood,” she said, “…most of these types of property crimes can be addressed in a lot of other ways that don’t put our families and neighbors at risk.”

Violent crime, on the other hand, is down 11% citywide. While violent crime in Los Cerritos is rare, the numbers don’t ease fears for one resident, who said she and her husband were bludgeoned and robbed in their driveway this year.

The resident, Susan, who asked not to give her last name, said her 74-year-old husband spent days in the hospital for broken facial bones. Susan, 70, had to get stitches on her scalp. She said one man was later arrested for the incident, but she still lives in fear.

“We were attacked and beaten so badly,” she said. “I’m still terrified.”

Susan, who has lived in the neighbored for 40 years, said she’s seen a significant increase in crime, even if the statistics are low. In addition to the attack this year, she said her home was burglarized last year and people have attempted to break in at least three times.

Susan said a burglar even shot and killed her neighbor’s dog during a break-in.

“We have a beautiful home and I’m so afraid,” she said. “Please, we need the security.”

Another resident, who asked not to give her name, said she was initially active in supporting the plan for private security and tried to bring together both sides. She took a step back after things got heated.

Councilman Al Austin, who represents the area, said he’s heard from both sides and is working with the police department and neighborhood association on developing a more robust community watch program. They’re holding a public meeting on Wednesday, he said.

For Valenzuela-Mier, she said the issue is more than political, it’s about the health and safety of her children.

She said she was saddened after a recent incident in which a neighbor called the police on her 21-year-old son because he was sitting on the curb in front of their home in the daytime talking on his phone.

She said similar incidents have happened many times over the years and she’s concerned that it may have lasting psychological effects on her children.

“This was a neighbor who has seen my children grow up under their nose and still has that implicit biased,” she said.

Valenzuela-Mier said she has even walked her children door to door to make sure they’ve met all of their neighbors, something other families have never had to consider.

“Individuals of color already have to take extra steps to make sure our kids our safe from this type of harassment, and it still doesn’t work,” she said.

Valenzuela-Mier said she’s hopeful the neighborhood can find a better way together.

“There are better solutions,” she said. “Because outsourcing your community involvement and paying someone to rove around the neighborhood is divisive and not helpful.”