Los Angeles County officials said Monday afternoon they will allow outdoor dining to resume on Friday after the governor lifted a strict stay-at-home order Monday morning for much of the state.

Beginning today, businesses that would be allowed to reopen immediately—with capacity limited to 25%—include barber shops, hair salons and nail salons, among others. 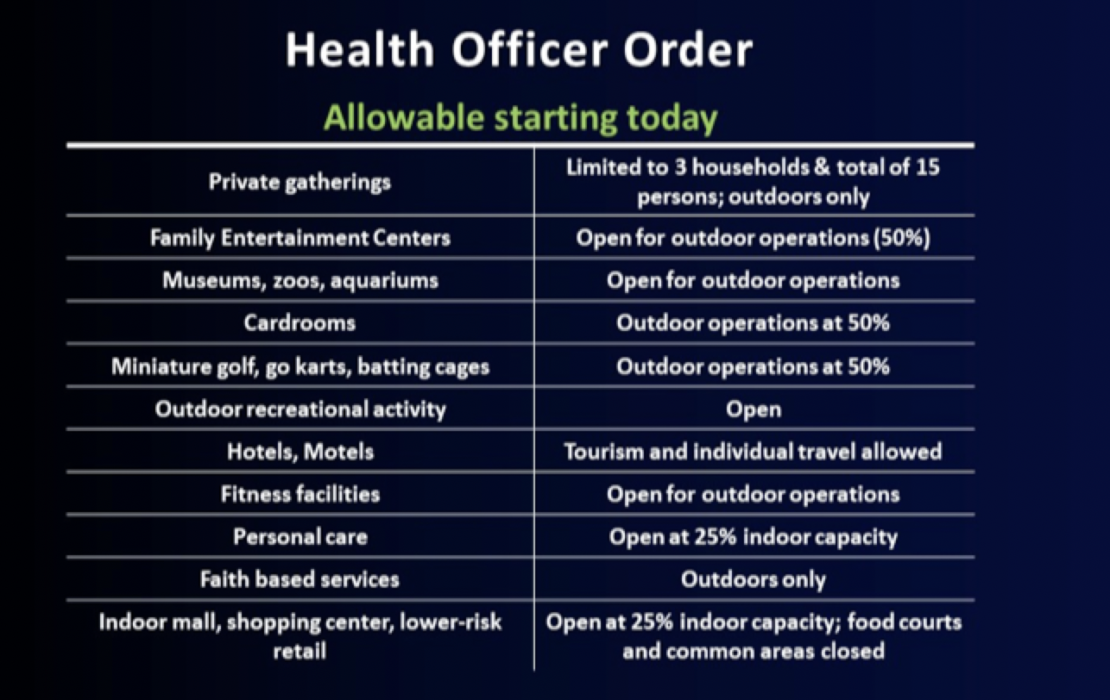 Outdoor dining will be allowed under a new health order on Friday, officials said, adding that a curfew for nonessential businesses between 10 p.m. and 6 a.m. will also be rescinded. Officials will work with restaurants to ensure safety precautions are put into place, including limited occupancy, officials said.

Long Beach officials have not responded to questions about whether they’ll follow suit. The city has its own health department, but it has aligned with the county on most decisions.

“Don’t take this news to mean you can return to a life of normalcy,” said Hilda Solis, chairwoman of the Los Angeles County Board of Supervisors, said Monday.

COVID-19 is still considered widespread in Los Angeles County. But the county will go back to restrictions that were in place prior to early December, when the state locked down the Southern California region after intensive unit care capacity fell below 15%.

Though the region’s ICU capacity is still calculated at 0% according to the state, the governor said Monday that projections based on caseloads show it will rise to 33.3% in four weeks, by Feb. 21.

As of Jan. 20, the county’s positivity rate is 12.9%, down from 20% at the start of the new year. The decline in positivity rate is a “very promising sign,” but still “far too many people are being infected with coronavirus,” said Barbara Ferrer, director of the county Department of Public Health.

There are now 7,072 people in the hospital countywide, down from a peak of over 8,000 earlier this year.

“We are headed in the right direction,” Ferrer said.

Officials noted that Tuesday, Jan. 26, will mark the one-year anniversary of the first case of COVID-19 in LA County. Since then the county has seen more than one million people test positive and 15,000 people die.