Long Beach teachers were first in LA County to be vaccinated; then the process stalled • Long Beach Post News
- ADVERTISEMENT -

The Long Beach Unified School District this week is coping with a much smaller allocation of COVID-19 vaccine doses than it expected after being promised the opportunity to inoculate its employees this week.

And the scramble to book the limited appointments has left some educators frustrated at a lack of organization and prioritization.

In recent days, Long Beach officials have touted their vaccine rollout, saying it’s been more efficient than many other areas of the state. Case in point, they pointed out Long Beach Unified School District employees today became the first educators in Los Angeles County to begin getting the vaccines.

But the process hasn’t gone exactly as planned, with shortages delaying the timeline significantly, even with the first shots going into educators’ arms today.

“We were hoping for more. I think everybody was,” said LBUSD spokesperson Chris Eftychiou.

Education officials say a nationwide vaccine shortage—exacerbated by Gov. Gavin Newsom’s statewide directive to provide doses to anyone 65 and over—threw a measure of chaos into the local rollout.

A few weeks ago, the plan was that all LBUSD employees who wanted the vaccine would get it between Jan. 25 and Jan. 29. In reality, only about 1,000 doses were available for appointments scheduled today and tomorrow at the Long Beach Convention Center; the LBUSD has approximately 12,000 employees.

“The expectation was a systemwide vaccination,” said Chris Callopy, executive director of the Teachers Association of Long Beach. “If you work for the LBUSD, you’re in this group, all of us. The health department and our own nurses who had volunteered to be on the front line vaccinating everyone from Jan. 25 to Jan. 29. In a relatively short period of time all of that got turned upside down.” 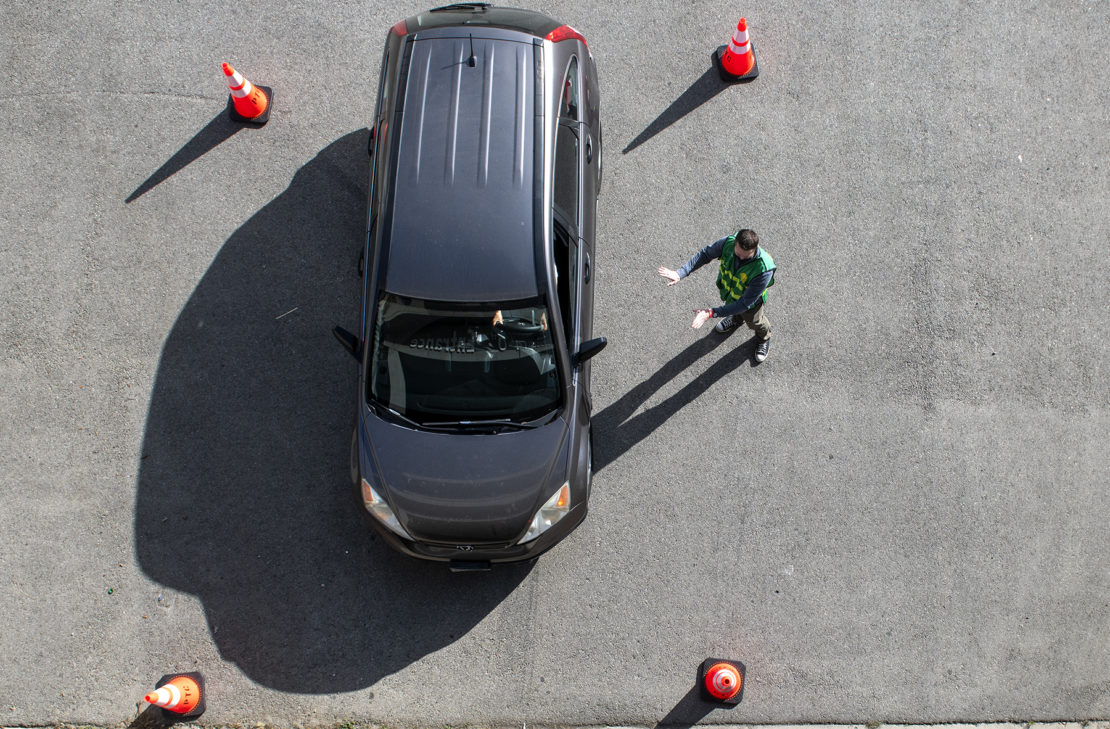 A volunteer controls the flow of traffic as he directs drivers to the check-in spots into the Long Beach Convention Center as it becomes a mass vaccination site in Long Beach on Jan. 19, 2021. Photo by Thomas R. Cordova.

The first complicating factor was Newsom’s instruction to vaccinate anyone 65 and older. The plan locally was to prioritize educators to help get schools open more quickly.

The other factor was the supply of vaccines themselves. After weeks of getting near or at five figures of doses, the city was notified last week it was receiving a shipment of just 2,100 doses for this week. If that supply doesn’t increase, it will be quite some time before the city’s educators are vaccinated. Four of the top nine employers in the city are either the LBUSD, LBCC, CSULB or the CSULB Research Foundation with a total of 20,981 workers, according to city data. And that number doesn’t include private schools, charter teachers or other early education workers.

“It’s an ever-shifting situation at the state level and the problems with supply from the federal level,” said Eftychiou. “We want to get as many people vaccinated as soon as possible. That’s a key factor for getting students back to the classroom in person; that’s probably one of the biggest factors.”

Asked when the LBUSD expected to have its workforce vaccinated, Eftychiou said that they can’t currently “meaningfully” say when that would happen.

Adding to frustration among the city’s educators was the fact that the 1,000 doses available this week were not prioritized for the 750 or so district employees currently working in classrooms with students or on campuses.

This left LBUSD employees scrambling for appointments on a first-come, first-served basis with little warning that the supply was short.

“Between what the mayor had been tweeting and what (LBUSD superintendent) Jill Baker put out in a video last Friday, we absolutely had an expectation of more than 1,000,” said Callopy. “They certainly didn’t make it sound like it was going to be people calling Ticketmaster for a concert hoping they’re the ones who get through.”

Eftychiou said the LBUSD was given a sign-up link by the health department to pass on to its employees. The link went out in an email on Thursday evening last week, with all appointments booked within about 10 minutes.

As with other vaccine sign-up forms provided by the health department, it was an open link, meaning anyone who got it could register. There was no way to verify ahead of time how many of the 1,000 appointment slots went to LBUSD employees, and Callopy said he’d heard teachers frustrated at seeing the link posted on NextDoor and other social media sites.

“The school district doesn’t have a role in screening the appointments or prioritizing people,” said Eftychiou. He said non-LBUSD employees will be turned away when they check in for their vaccine appointment.

Eftychiou stressed that while the vaccination timeframe is being extended, the district is prepared to work with the city’s health department to make things as efficient as possible when more doses are made available to educators.

“As soon as more vaccinations and appointments are available, we can work very quickly to notify people,” Eftychiou said. “This first round is a good trial run for the coming weeks as we continue. The supply of the vaccinations are not in the control of the school district or to some extent the local health department. … The best thing we can do is just be ready for when more are available.”