Yet again, Erik Vasquez watched through security footage as a person broke into his restaurant, La Esquinita Mexican Grill, located on the corner of Oregon Avenue and Willow Street in Long Beach’s Wrigley neighborhood.

“It feels sad, and there are times when you feel disappointed,” said Vasquez.

The latest attack happened in the early morning on Friday, at around 4:37 a.m. Security footage shows a person who’s wearing a mask and black clothing using a tool to break the glass and kicking the front door in. With glass shattered on the ground, the burglar hurries inside for less than 20 seconds before running out of the restaurant empty-handed.

Police responded to reports of an audible burglar alarm at the restaurant at around 5:32 a.m. and boarded up the shattered front door, according to the LBPD. No suspect information was immediately available, and the investigation is ongoing, police said. 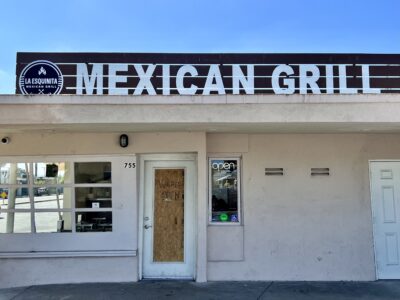 The boarded up front door at La Esquinita Mexican Grill reads, “We are open,” following a break in earlier that morning on September 16, 2022. Photo by Laura Anaya-Morga.

This marks the fourth time the restaurant has been broken into since it opened in October 2021, and each repair costs upwards of $2,000, said Vasquez.

Following the break-in, La Esquinita received an outpouring of support on social media, with local businesses and loyal customers urging their followers to show up and support the family in person. At the restaurant, customers offered words of encouragement to the staff.

“What? They broke your door again?” exclaimed Clare Le upon entering through the front door that had now been boarded up with wood. “You know what, though? We’re gonna keep going,” she told the cashier.

“It’s heartbreaking to see the front door boarded up because on the other side of that is an entire staff of incredibly friendly people,” said Le. The restaurant’s hospitality and food is unmatched, she said.

Isabella Marquez, a cashier at La Esquinita and Vasquez’s niece, said that the continuous break-ins are disheartening to see. “It’s very devastating because we are working so hard to make my uncle’s dream come true,” she said. 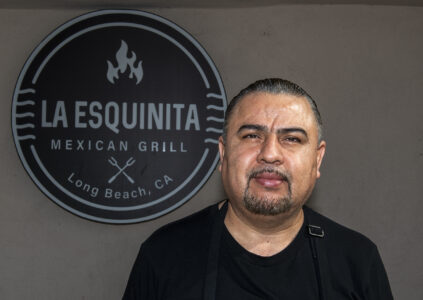 In April, following the third break-in at the restaurant, Vasquez told the Post that his path to opening La Esquinita began in childhood, when he would watch attentively as his grandmother cooked for him and her seven children every day in the small ranch town of San Luis Potosí in Central Mexico.

When a vacancy appeared at a small corner on 755 W. Willow St. almost three years ago, Vasquez jumped at the opportunity to make the dream of opening his own restaurant come true. The COVID-19 pandemic set back the official grand opening of the restaurant to October of last year.

Now, his focus is to keep his spirits high and continue to serve the food that connects him to his roots. “We keep going,” he said.