Combs visited with the idea of opening a practice in Los Angeles. He was already well-established and successful in North Dakota law and politics—though his reputation and work went beyond the Peace Garden State. He was involved with the American Bar Association and served on its council with former president and Supreme Court Chief Justice William Howard Taft as well as Charles Evans Hughes, who would become Chief Justice after Taft’s death in 1930.

Combs came to Long Beach just a year after oil was discovered on Signal Hill, a time when the city was bristling with opportunity.

Throw in its climate and proximity to the ocean and Combs was hooked on the town. He opened law offices in LA and in Long Beach, where he worked out of the Pacific Southwest Building on American Boulevard (now Long Beach Boulevard).

He purchased a lot on the corner of First Street and Lindero Avenue in Bluff Park and hired Belmont Shore contractor J.B. Langford to build a Spanish Revival home that is said to have been inspired by a Costa Del Sol villa which Combs and his wife Mabel had admired on a visit to Spain. Reportedly, the couple flew an architect over from that country to ensure the authenticity of the project. The couple dubbed the residence La Villa de la Luna.

The home is now on the market, listed by Mark Wilson of Coldwell Banker, at $3.999 million.

William Barden, who made his fortune in the pest-control business started by his grandfather more than a century ago, has owned the house since 1977. While the Combs lived with three sons and a daughter in the house, Barden has lived alone in the four-bedroom, six-bath residence. “This house has always been my baby,” he says. 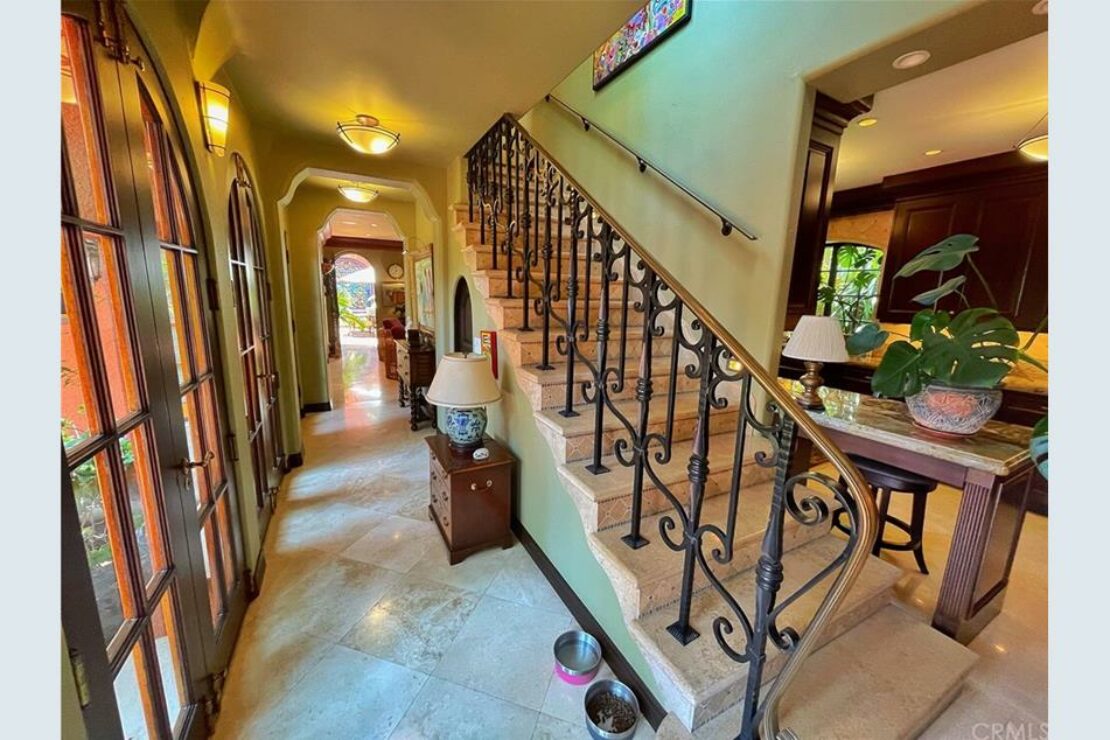 A hallway and marble staircase in the restored villa. Listing photo.

And he spent a lot of time and money taking care of his baby, doing ambitious remodeling and restoration over the years, including enclosing a breezeway and turning it into a full-size family room, and connecting the main part of the house with the bedrooms on the other side of the courtyard. Before, said Barden, you had to walk through the courtyard to get to the family bedrooms.

Today, the home is one of the most attractive in the Bluff Park area, which is saying something as the historic neighborhood is full of elegant and diverse architecture, featuring many of the most impressive homes in the city.

The residence, at 2501 E. First St. has been a fixture on home tours of Bluff Park, where visitors have admired its faithful Spanish Revival style—as Long Beach Heritage described it one of its home tour brochures: “Its red tile roof, thick sandstone colored walls, arched openings, indoor-outdoor continuity, spiral pilasters on the front windows and elaborate scrollwork framing the front entrance serve to differentiate the Spanish Revival style from the seldom seen Mission Revival style.”

Amazingly, Barden is only the second owner of the 1923 home. The Combs wanted to keep it in the family until the last heir died, according to Wilson. The patriarch of the family, Lee Combs, died in 1931 at the age of 62, leaving the home to his wife and their four children. 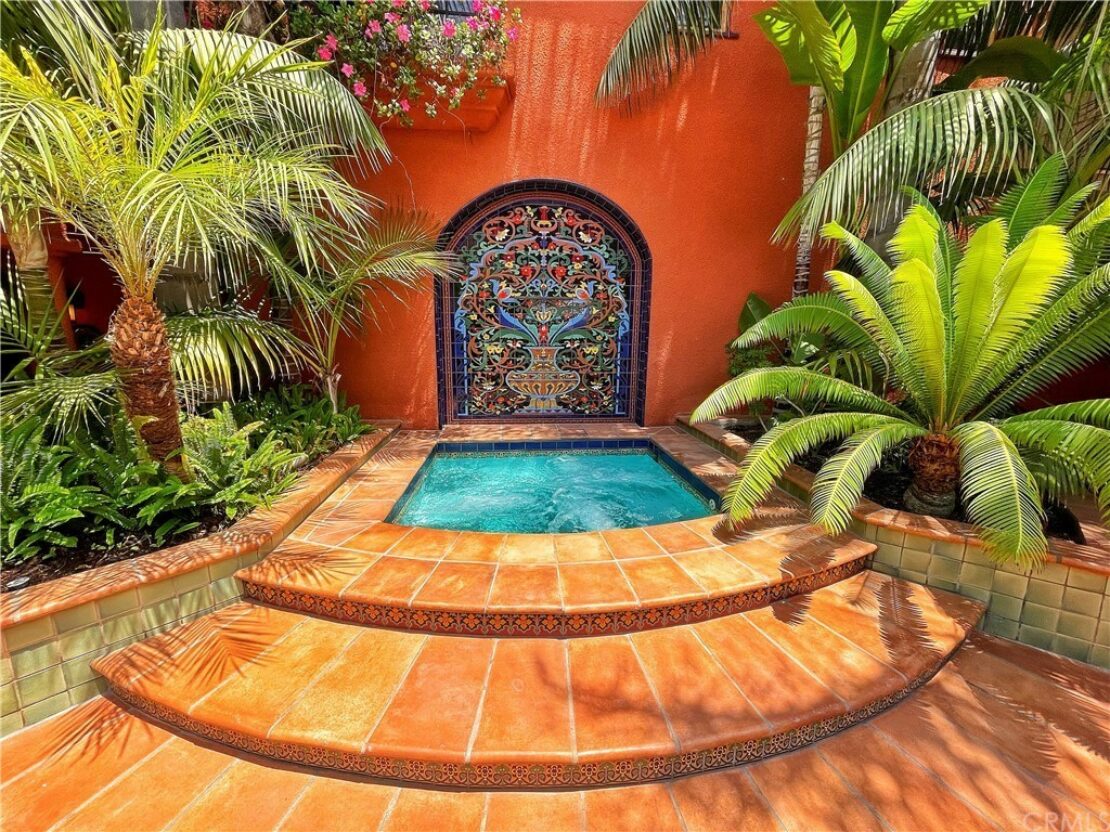 The spa in the courtyard of La Villa de la Luna. Listing photo

Today, the residence, just a block off the beach in the historic district, has a total living space of just under 4,000 square feet. The main residence has two master bedrooms, each with its own bath and walk-in closet.

The entryway features stained glass and a crystal chandelier. The main residence has a pair of master ensuite bedrooms each with a walk in closet.

The dining room features a built-in china cabinet and crystal chandelier and French doors opening to the courtyard. The adjacent hallway leads to the custom marble staircase up to the two master bedrooms with hardwood floors throughout.

The courtyard has a fountain with koi, an outdoor fireplace, arches and columns and custom tiles throughout and custom wrought iron with potted bougainvillea and a tiled jacuzzi with shelf fountain. 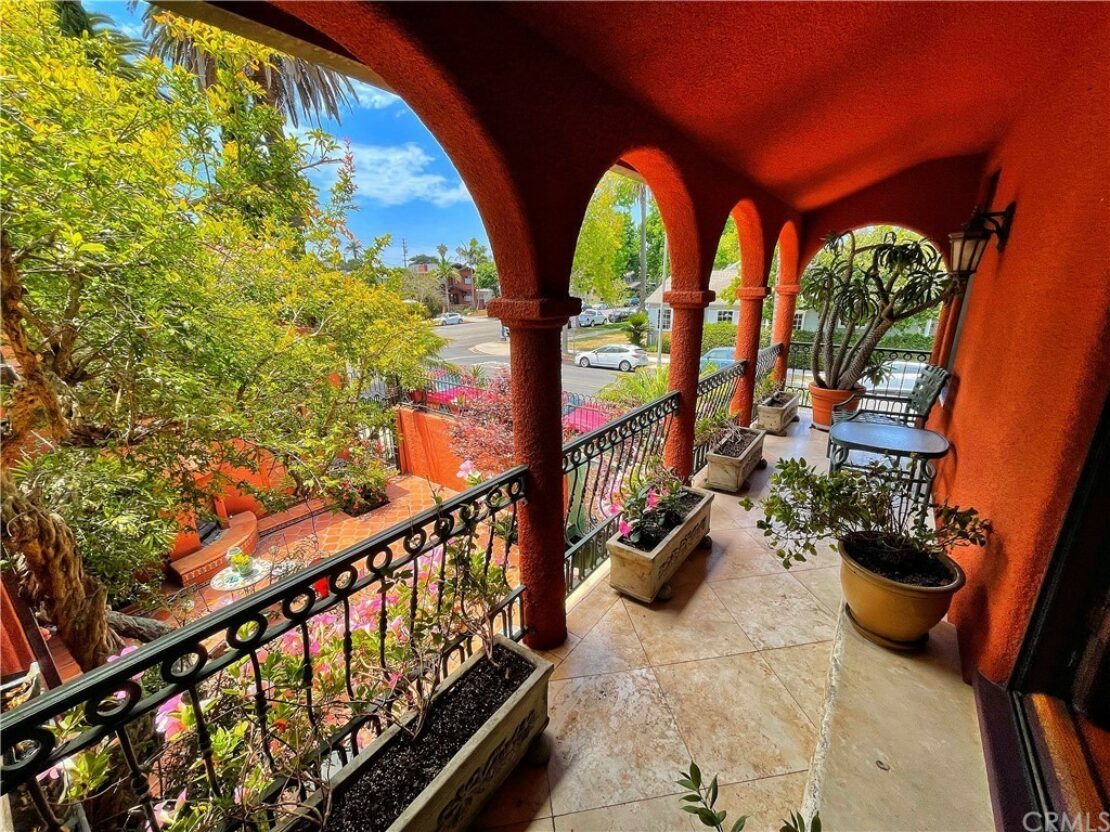 Barden built a separate guest quarters in the back over the three-car garage. The guesthouse has its own bedroom, full kitchen, bath, laundry room and living room with high ceilings and a fireplace.

To prevent a large turnout of the merely curious, the house is being shown in person only to qualified buyers, said Wilson. “But that’s why I put so many pictures in the listing, to help satisfy that curiosity.”