The number of COVID-19 cases linked to Long Beach Unified campuses and worksites surged last month, according to data from the school district.

In all, 90 positive tests come back for employees, students or visitors during the month of December. That’s more than half of the 174 total cases the district has logged since virtual classes resumed for the 2020-21 school year on Sept. 1.

That’s similar to what’s happened more broadly across Long Beach where the spread of COVID-19 has accelerated to unprecedented levels. It took nine months for Long Beach to reach 16,202 total coronavirus cases at the end of November. That total essentially doubled over the next month, reaching 32,368 by the end of December, according to data from the health department.

Of the 90 LBUSD coronavirus cases in December, 74 were employees and just nine were students.

The number of students testing positive actually declined from 10 in November, but the LBUSD only tracks on-campus students who’ve tested positive. The LBUSD has not widely opened its campuses for in-person learning since it closed them on March 13, but about 1,600 of the district’s 70,000 students are currently on campus for preschool or day care programs. 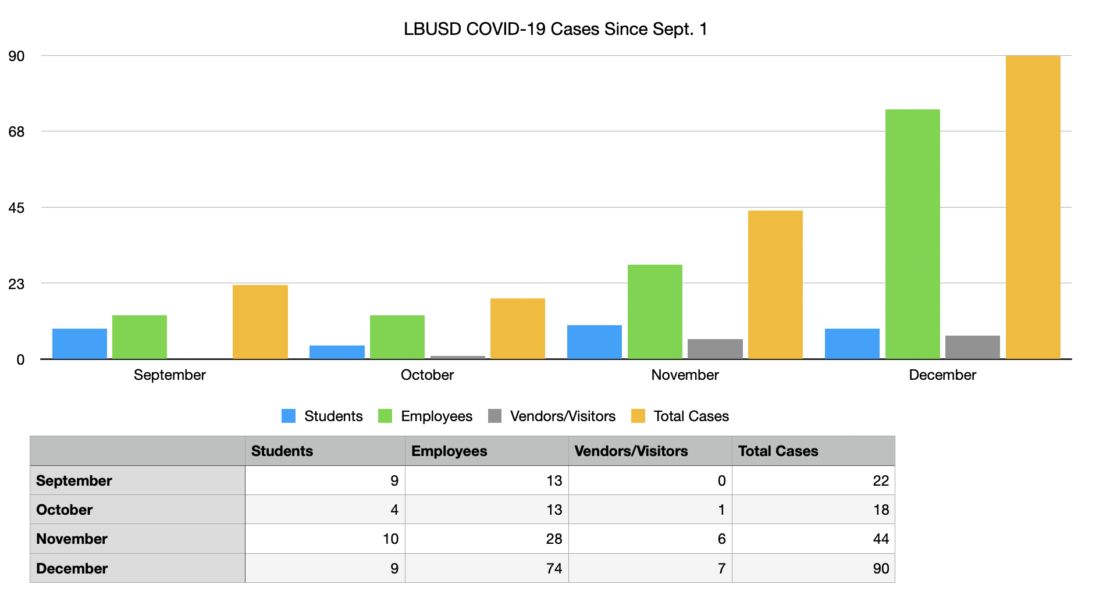 A much larger percentage of the district’s approximately 12,000 employees are on campuses, but that number has fluctuated throughout the school year due to the allowance for many teachers and some classified employees to work from home.

The jump in December cases could actually be higher than the school district reported Tuesday because it was closed for winter break for part of the month, and, spokesperson Chris Eftychiou said, the dashboard might be updated with a few more cases this evening.

The school district is currently planning on resuming in-person learning for families who want it on March 1, but it also plans to apply for waivers to begin opening some lower grades sooner—assuming the current surge subsides.

Health officials expect the wave of cases to intensify through January after many people traveled and gathered for the holidays.