James Collins spent Tuesday morning at the muffler shop, getting the O2 sensors on a couple of his vans replaced. The vans belong to the nonprofit organization Help Me Help You, which uses them to stock nine food banks for those in need.

The sensors were damaged on Christmas Eve, when thieves stole the vans’ catalytic converters. Though there was security footage of the crime, Collins, Help Me Help You’s food services manager, said it wasn’t conclusive.

The thefts happened at a rough time for Help Me Help You. The organization, which provides fresh and pre-packaged groceries to nearly 50,000 Long Beach residents each month through its pantries around the city, has even worse problems, which mirror those of food banks nationwide.

“Across the board, we’re seeing fewer numbers of individuals showing up,” Collins said. It used to be that 12 to 20 volunteers would show up to help distribute food on Fridays, one of the biggest days of the week for the organization’s food pantry services, he said. “Now, I’m lucky to get four to six.”

Food banks all over the country are dealing with a shortage of volunteers because of the omicron variant of COVID-19, according to the Associated Press. As a result, nonprofits that are already struggling because of supply chain issues and inflationary pressures are also scrambling to fill basic staffing needs. 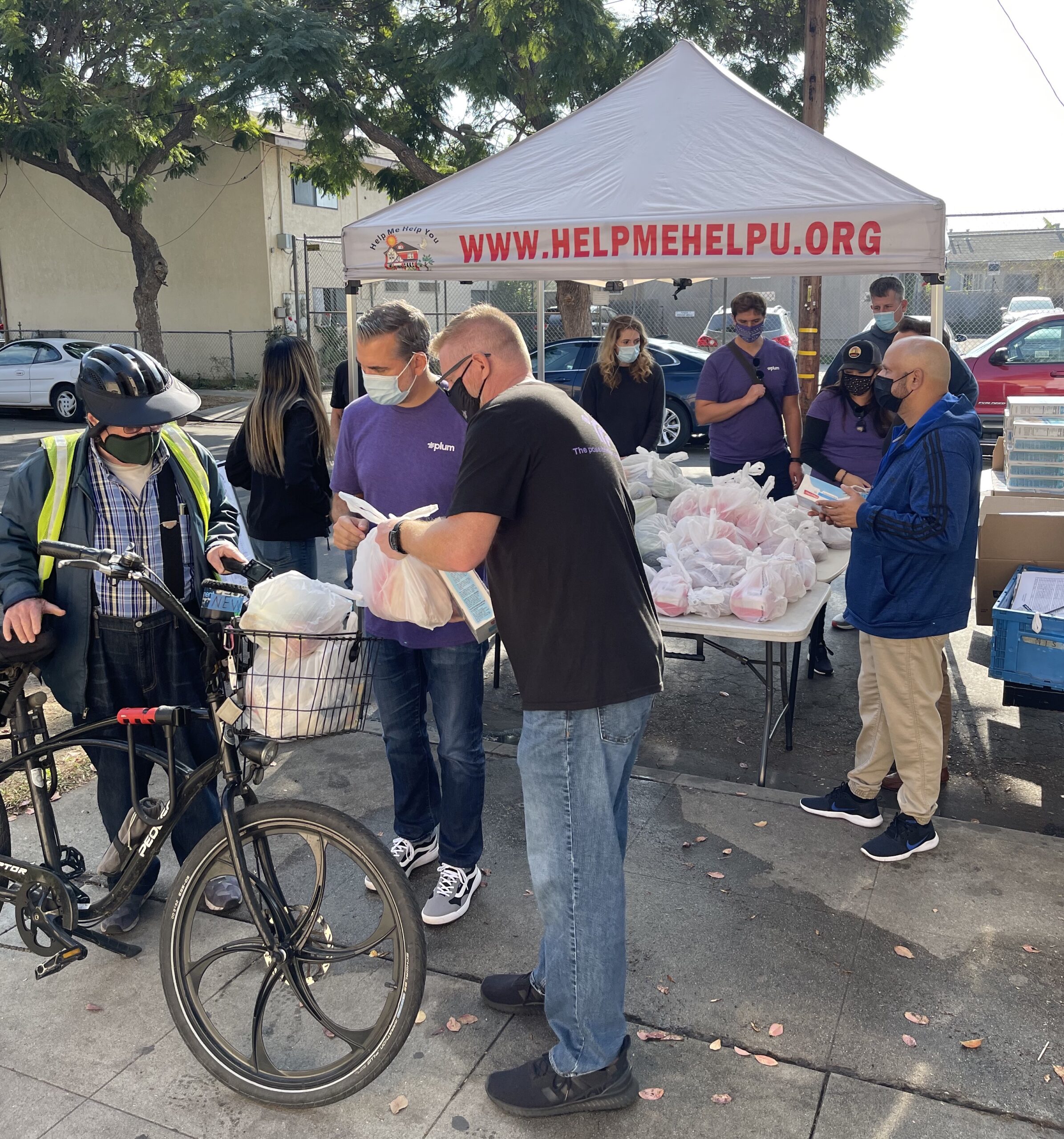 Volunteers from Help Me Help You hand out pre-packaged groceries to those in need at the nonprofit organization’s Lincoln Elementary School food pantry. Undated photo courtesy James Collins

Collins at Help Me Help You says that despite the losses in volunteers, he’s still able to get food to their pantries throughout the month, even though the organization’s number of food pantries tripled since the start of the pandemic. But it’s difficult to find new people on social media sites dedicated to nonprofits.

Collins likes volunteers to both bag the groceries at their main hub as well as give out the food at their weekly food pantries, he said. It’s more meaningful to them, that way.

“If you come out and help someone else, it helps relieve some of the stress and strain on yourself,” he said.

Monica Diaz, a case manager at Catholic Charities of Long Beach, said her organization decided to proactively forgo using volunteers during the omicron wave of infections.

“We’re not getting any volunteers because of COVID,” she said. The organization is still getting food donations from various food finders, supermarkets and the like, she said.

Catholic Charities of Long Beach helps an estimated 100 to 300 people a week, according to Diaz.

But not all local food banks are dealing with shortages of volunteers. Julie Lie, the food network manager at the Long Beach Center for Economic Inclusion, which also runs nine pantries throughout the city, said her organization is suffering from a shortage of funds, not volunteers.

“There has been a good volume of people helping,” she said. “But in terms of operational costs, it’s been very challenging.” 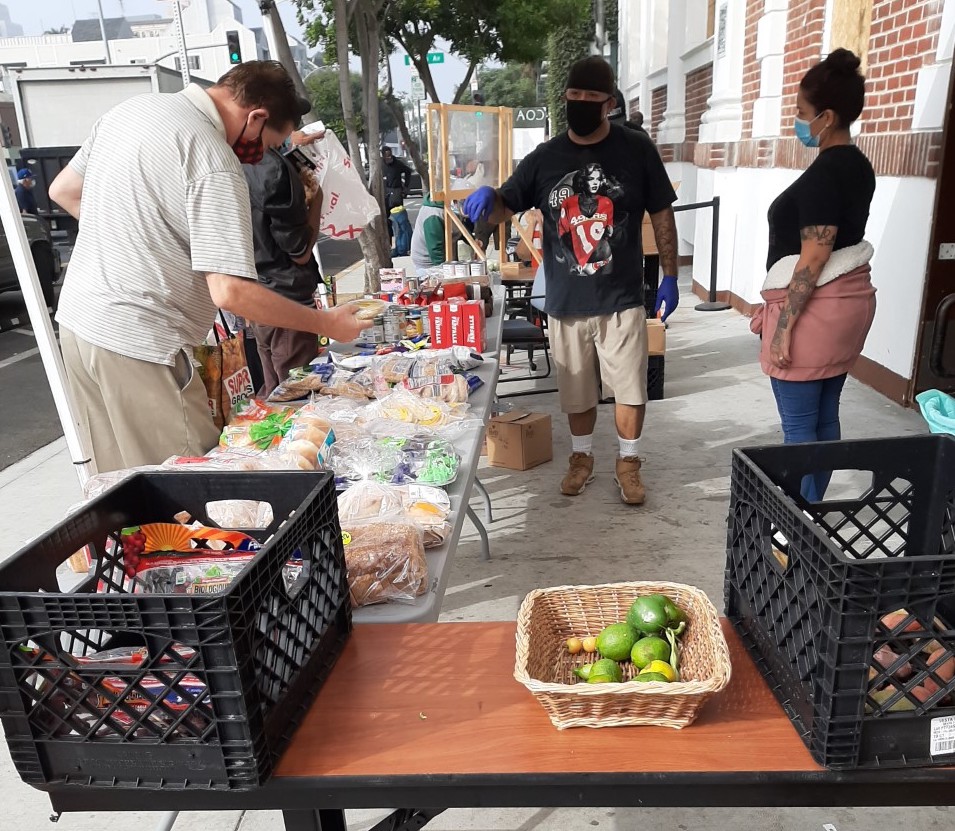 Volunteers with Long Beach Center for Economic Inclusion hand out food to those in need at the nonprofit organization’s food pantry at Christian Outreach in Action in Downtown Long Beach. Undated photo courtesy Emily Kazim

Because many federal food assistance grants like the CARES Act expired in recent months, Lie has had to increase her reliance on unpaid volunteers. Even so, the organization is still able to receive and distribute between 10,000 and 13,000 pounds of produce twice every month.

“It’s just not comfortable asking volunteers to do so much, but we just don’t have other alternatives,” Lie said. Lie said her organization has had to deal with this since at least the summer.

“I used to be able to buy chicken and meat, but haven’t been able to do that since April 2021,” Lie said. “The food bank provides canned tuna but it’s not the same as frozen chicken. I’m not sure how to remedy that, though the Mormon Church has a cattle and dairy farm in Utah. I just submitted a grant [to them] for 5,000 pounds of meat.”

Lie said her organization has been able to keep working through the pandemic by relying on a huge network of free food, which includes unclaimed produce from farms and food from supermarkets that has passed its shelf life. Though Lie said this free food supply chain is “quite robust,” it still doesn’t make up for the drop in operational funds.

“It’s a little discouraging on my end because I want to give our pantries stipends, but we haven’t been able to do that since last summer,” said Lie.