No single man-made object has filled the sky over Long Beach to as great an extent as the USS Shenandoah dirigible did on the afternoon of Oct. 16, 1924.

Nothing, in fact, has come close. Not the 192-foot-long Goodyear blimp, not the massive C-17s built by Boeing in Long Beach that measured 174 feet in length, and not even the largest airplane in the world, the 227-foot-long Ukrainian Antonov AN-274, which made frequent stops at Long Beach Airport. (Sadly, it won’t appear here again. The aircraft was destroyed by Russian troops in February.)

The U.S. Navy’s airship USS Shenandoah was the size of a battleship, 680 feet long, when it dominated the skies over Long Beach for several minutes on its way to Los Angeles and ultimately to a field near Tacoma, Washington, for the purpose of testing newly erected mooring masts.

The Long Beach flyover was part of the dirigible’s cross-country journey, originating from its base and birthplace at the Lakehurst Naval Air Station in Lakehurst, New Jersey, the center of the Navy’s lighter-than-air activities.

It was the first transcontinental trip made by an airship, and everywhere it traveled it drew amazed stares and cheers from onlookers below.

In Long Beach, according to the local press, thousands of people lined the streets from Downtown to the east, while those in office buildings and hotels gawked out from windows. “Whistles shrieked, fire sirens sent their screaming welcome into the clouds and automobile horns joined the clamor which greeted the arrival,” the Press-Telegram reported.

Crews aboard ships in the World War I battle fleet stood at attention on the decks as the massive airship circled above before it sailed over Downtown’s Ocean Boulevard and onward over Signal Hill before cruising on toward LA and Pasadena, all the while being watched by further crowds that had assembled to witness the majestic craft’s passage. 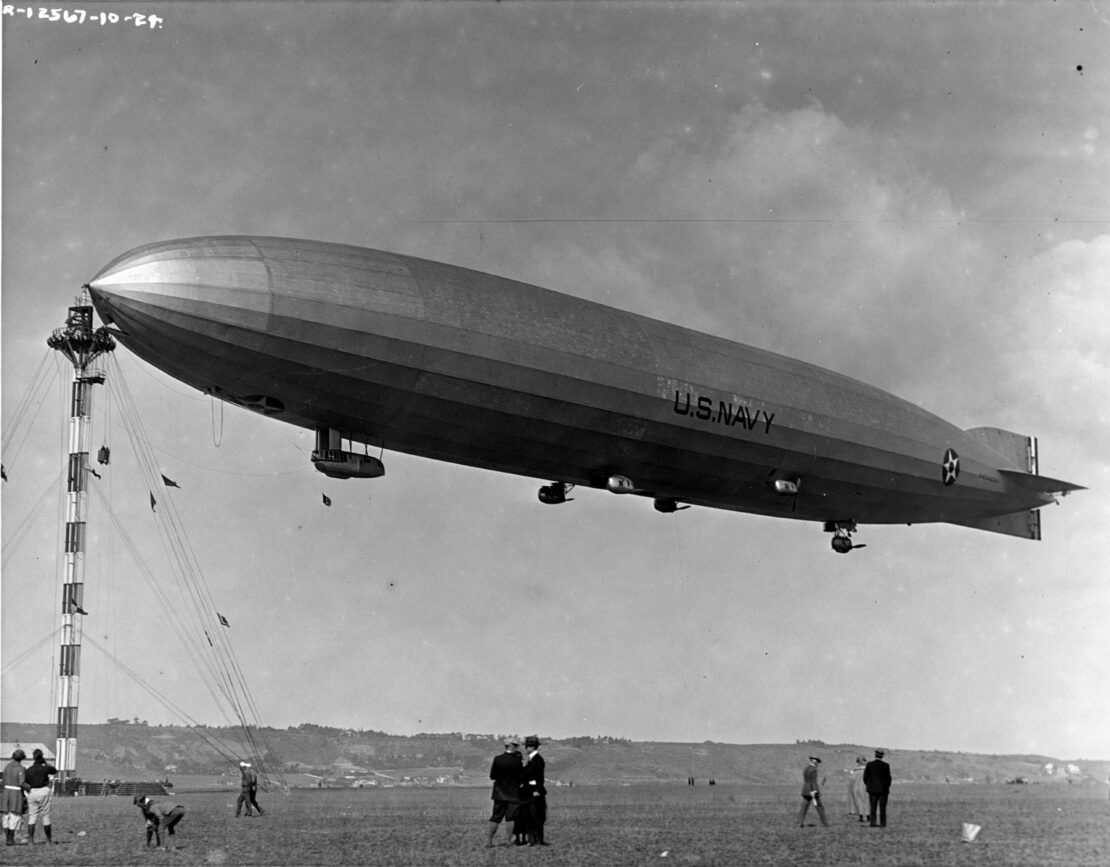 The Shenandoah at a mooring station in San Diego prior to flying to Long Beach in October 1924. Wikipedia photo.

It was a relatively brief era in aviation history when there were huge and enthusiastic hopes for lighter-than-air craft, and Shenandoah’s historic cross-country journey encouraged those who saw great potential for airships carrying travelers and cargo.

But as it turned out they were somewhat less than dependable. The Shenandoah’s end came less than a year after it soared over Long Beach.

On Sept. 2, 1925, the Shenandoah set out on a goodwill tour of the Midwest, which would include flyovers of several cities, and state fairs. On the second day of its trip, the airship  encountered thunderstorms and was caught in an updraft. The dirigible was torn apart in the turbulence, and crashed near Caldwell, Ohio. Fourteen of its crew of 53 died, including its commander.

At the crash site, an estimated 1,000 people descended on the wreckage, among them looters and souvenir collectors who managed to make off with the craft’s logbook and expensive instruments. The farmer who owned the land began charging people to enter—a dollar per auto, 25 per pedestrian and a dime for a drink of water.

Despite the wreck of the airship, the Navy persisted in building rigid dirigibles, launching the USS Akron and the USS Macon in 1931. Both airships subsequently crashed. The Akron was destroyed in a thunderstorm off the New Jersey coast on April 4, 1933, killing 73 crew and passengers. The Macon was hit by a storm off Point Sur in California on Feb. 12, 1935 and landed softly in the ocean with only two fatalities. The 81 survivors were rescued by nearby ships. Their survival was likely due to the warm water and the fact that they had life vests.

So, things weren’t going swimmingly for the lighter-than-air craft, and public opinion took a greater downturn with the infamous fiery disaster of the hydrogen-filled German dirigible Hindenburg on May 6, 1937. The Hindenburg, which dwarfed even the Shenandoah at 804 feet in length, caught fire while attempting to dock with its mooring mast at Naval Air Station Lakehurst. Thirteen passengers and 22 crewmen perished in the spectacular and highly publicized disaster.

Though dreams of the great possibilities of dirigibles grew dim in the wake of the Hindenburg disaster, dirigibles and other blimps were still put to use during wartime, and construction spiked during World War II and again during the Korean War before the craft faded from military use.

On June 21, 1961, the Secretary of the Navy announced the termination of the Navy’s lighter-than-air program. The final flight of a naval airship occurred on Aug. 31, 1962, with a ceremonial launch of the last pair of non-rigid Navy blimps at the Navy’s facility.

The base log noted on that date: “This flight terminates operation of non-rigid airships at Lakehurst.”