Local history: The 26-second flight of the Spruce Goose • Long Beach Post News
- ADVERTISEMENT -
Help us light up the city; Add your home to the 2022 Holiday Lights map. CLICK HERE

Combine the knowledge and ideas of a shipbuilder and an aviation expert and don’t be surprised if you get a ship that flies.

In 1942, American ships carrying supplies and troops to Europe to engage in World War II found themselves easy prey for German U-boats. The idea to build an aircraft big enough to carry large numbers of troops and materiel safely across the Atlantic, high above the German torpedoes, came from industrialist and shipbuilder Henry J. Kaiser, who engaged the services of aviator and airplane builder Howard Hughes to bring the concept to reality.

The pair named this yet-to-be-built craft the HK-1 (for Hughes/Kaiser). Hughes, a perfectionist, continually fiddled around with the craft’s plans and by 1944 a frustrated Kaiser bailed on the project and Hughes renamed it the H-4 Hercules.

One of the main obstacles was the military’s strict rationing of steel and aluminum which was necessary for the war, which Hughes overcame with the novel idea of using wood instead—mostly a laminate made chiefly of birch, which didn’t deter the nation’s press and aviation fans from dubbing the craft the Spruce Goose, which had a nice rhyme to it as opposed to the more alliterative Birch Bird. More severe critics termed it the Flying Lumberyard. Hughes despised all nicknames for the craft.

Whatever it was called, the thing was a monster. It weighed 200 tons, had a wingspan of 320 feet—no professional NFL quarterback has thrown that far—and cost more than $23 million to build. Its eight Pratt & Whitney propeller engines combined for 24,000 horsepower. Even today, some 75 years later, the H-4 Hercules holds the record as the largest seaplane, largest wooden aircraft and largest propeller plane.

But could it fly?

In 1947, Hughes was ready to test the plane. A house-moving company rolled three pieces of the Spruce Goose down residential streets to Pier E in Long Beach where the three pieces were assembled into the body of the plane, and a hangar was constructed around it, complete with a boat launch for a water takeoff.

On Nov. 2, 1947, by which time the military had no further use for the plane and peace had rendered it of little use, Hughes, an accomplished pilot who had twice set speed records in his racing aircraft, motored the Spruce Goose into the waters off the Long Beach harbor in what was to have been another non-flight taxi run more as a boat than an aircraft. He hadn’t planned to fly it until the following March or April.

Hughes’s engineering crew fired up the eight engines at a little after 2 p.m., thrilling thousands of onlookers. With Hughes at the controls and a crew of 29, the flying boat lifted 33 feet off the surface and flew about a half-mile at a speed of about 80 mph in 26 seconds before making a perfect landing. 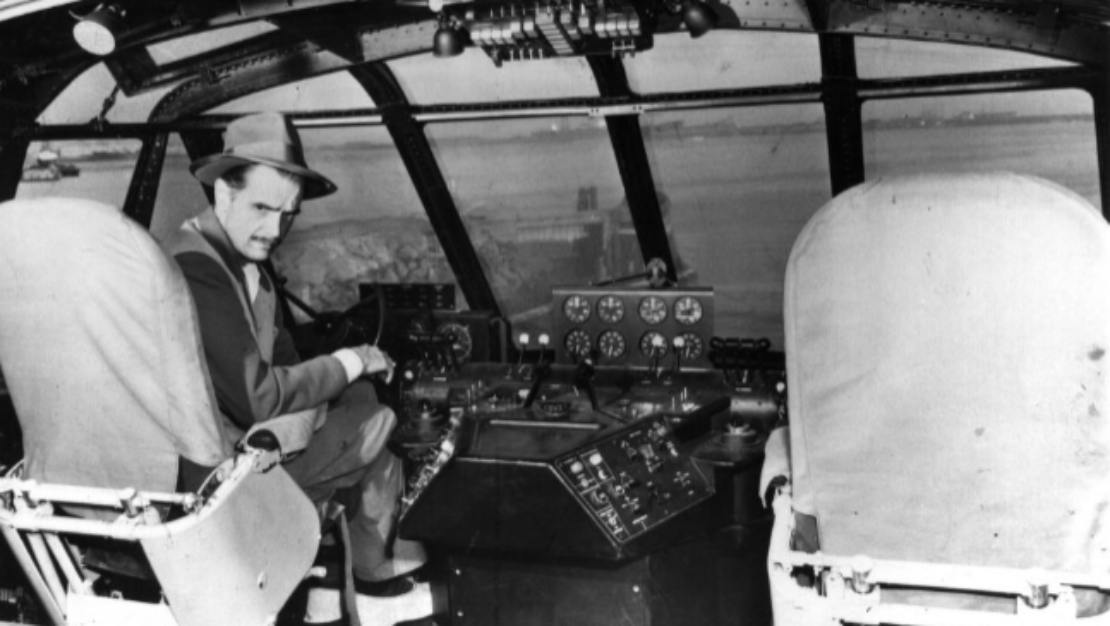 If it wasn’t clear proof that the Spruce Goose would be able to do what it was meant to do, it at least showed it was capable of flight, however limited.

It surprised everyone. When asked if he had set out that afternoon to fly the craft, Hughes replied enigmatically, “I didn’t decide to take off until I actually did.”

The Spruce Goose’s inaugural flight was also its swan song.

Though it never flew again, Hughes didn’t turn his back on his project. The wealthy airplane builder, inventor and movie mogul had the plane moved to a climate-controlled hangar in the harbor where it was maintained out of public view by a crew of 300 workers who regularly fired up the engines and kept the plane in running condition at a cost of a million dollars a year. In 1952, the crew was trimmed to 50 full-time workers who remained on the job until Hughes’ death in 1976.

In 1980, the Spruce Goose was acquired by the Aero Club of Southern California and was displayed in the giant geodesic dome, serving as a sister attraction to its neighbor the Queen Mary.

In 1992, the Spruce Goose was disassembled before embarking on another voyage. It was transported by barge up the West Coast to Oregon’s Columbia and Willamette rivers to its new and current home at the Evergreen Aviation and Space Museum in McMinnville, Oregon.