It’s not exactly local news. In fact, it took place 5,123 miles from Long Beach. Still, the Long Beach Sun published a story about the event on its front page on Sept. 25, 1934:

“All Glasgow is working feverishly in preparation for the launching of the Cunard mystery liner 534, which will be christened by Queen Mary of England tomorrow.”

England’s The Daily Mail takes over from there, on the day itself, as Mary, the queen’s consort, married to King George V, stood by waiting to christen and at last name the vessel.

“She had been a little tense, apparently conscious of the tremendous importance of the occasion,” the paper reported.

“But as she moved to the microphone the tenseness left her. In a clear, calm voice she said, ‘I am pleased to name this ship the Queen Mary,” and struck her namesake’s hull with a bottle of Australian wine and an estimated 250,000 people standing in the rain in Clydebank burst into cheers and shouts, throwing their hats into the air in a celebration that was surely the greatest in the history of the small Scottish town.

Headline from England’s The Daily Mail.

Or, as The Daily Mail put it a little less kindly, “The drab, dreary little Scottish township with its maze of grey streets and dismal tenements, today became the ‘listening post’ of the world.”

The launch went smoothly, perhaps better than expected as the 73-ton vessel slid stern-first down its slipway at John Brown & Co. Shipbuilding into the water, sending giant waves up and down the River Clyde.

There was, of course, more speechifying, including an address from King George, who noted the hardships as well as the shipbuilding delays, caused by the Depression. After crediting himself for overcoming the financial hardship, he continued: “It has been the nation’s will that she be completed, and today we can send her forth, no longer a number on the books, but a ship with a name, in the world, alive with beauty, energy and strength.” And while the king’s speech drew enthusiastic applause, even more joy among the crowd, many members of which depended on shipbuilding for their livelihood, was elicited by the words of Sir Percy Bats, chairman of the Cunard White Star Co., who announced immediately after the launch that work on a sister ship (which would become the Queen Elizabeth) would commence shortly, ensuring several more years of employment for the shipbuilders. 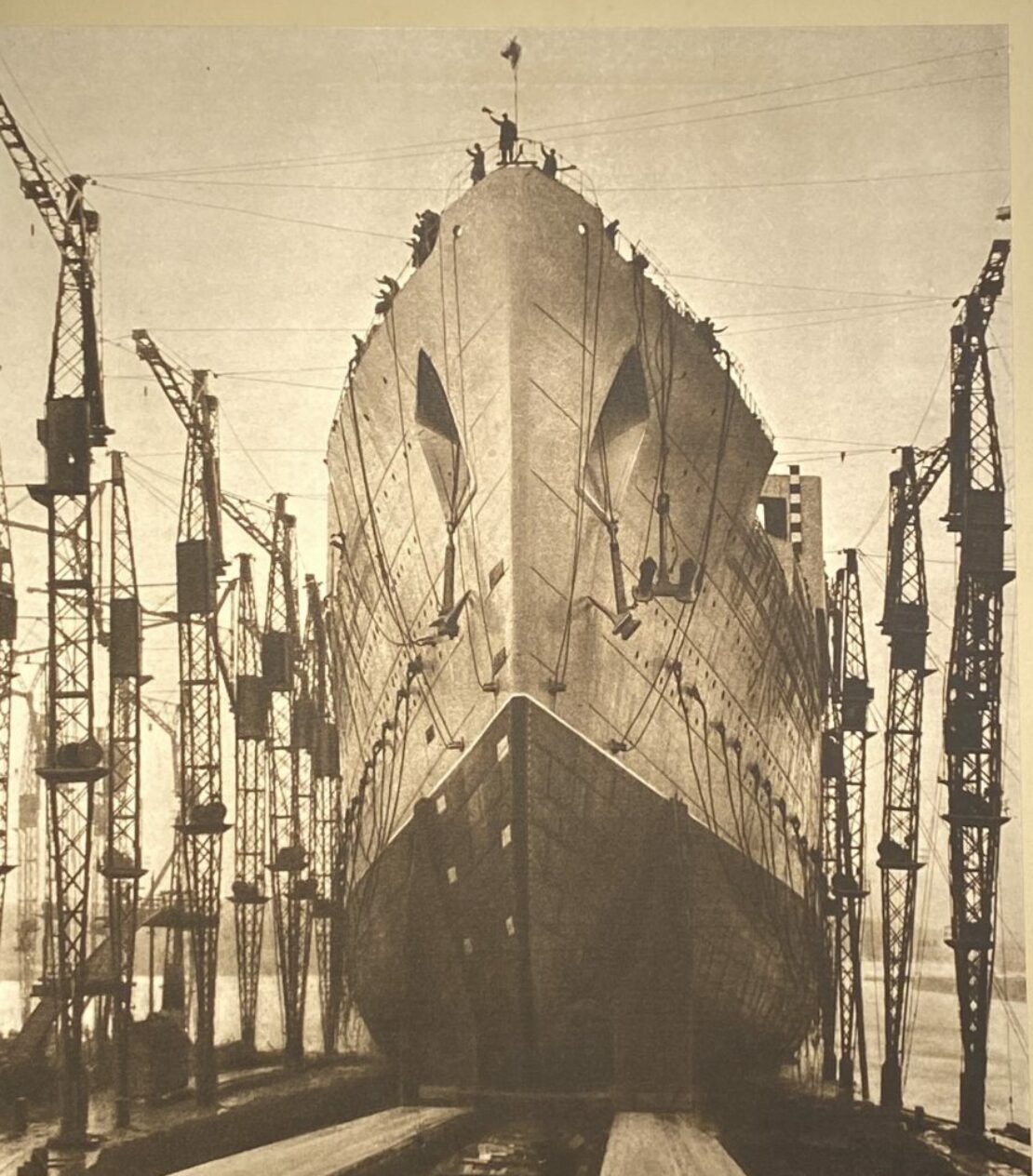 The Queen Mary was known simply as “534” while still under construction. Only at its christening in 1934 was its name revealed. Souvenir launch brochure photo.

The Queen Mary launch celebration ran on into the night. The Sept. 27, 1934 Liverpool Echo newspaper detailed how hotels and restaurants gave special dinners and dances and at theaters showing films of the launch had people waiting for hours to get in. “High spirits ran riot in the city,” the Echo reported.

After the revelry, there was still more work to be done on the Queen Mary—a name that workers had a bit of trouble with after years of referring to the ship as 534. There was the elegant outfitting of the ship using wood from virtually every country in the sprawling British Empire, as well as the installation of bulkheads, turbines and engines. Nearly 500 workers continued the job of finishing what they had started four years earlier in December 1930.

Their work was finished a year and a half later and on May 27, 1936, the Queen left Southampton on its maiden voyage across the Atlantic, the first in a three-decade adventure for the Queen Mary that concluded with the liner’s first and only excursion into the waters of the Pacific, its final voyage into Long Beach on December 9, 1967. Again it was greeted with celebration and massive crowds, while the ship was officially retired and began its second life as a tourist attraction.

It’s now closed and has fallen into disrepair after years of mismanagement and neglect.

Its future is uncertain, but however it ends, it’s likely it  won’t be the Queen Mary’s finest hour.