Allen, a businesswoman and retired police officer, is pitted against businessman Robert Fox in a Nov. 3 runoff for the City Council District 2 seat, which represents Downtown and much of the waterfront.

In the latest round of mud-slinging, Long Beach resident Lee Richmond Charley said he volunteered to help the Fox campaign dig up evidence that Allen has been lying about her residency and actually lives in Fountain Valley rather than her Long Beach condo.

Fox and his campaign have vehemently denied the allegations, saying Charley is mentally ill and was never part of the campaign. But the emails provided to the Post and other media show, at the very least, that he was encouraged by some of Fox’s supporters.

In an attempt to try and prove that Allen lives in her Orange County home, Charley, a part-time food delivery driver, said he spent months videotaping the home, taking pictures of cars outside the home and delivering Krispy Kreme donuts and other food that nobody had ordered in the hopes that he could catch Allen answering the door.

According to hundreds of emails, text messages and documents reviewed by the Post, the activities were allegedly part of an effort called “Operation Allentown” that included a worksheet of assignments for Fox, Charley, local blogger Joe Mello, Fox campaign manager Ian Patton and resident Deb Mozer to dig up dirt on Allen.

“I have done my best to take from my notes the assignments for all of us from the meeting on Wednesday,” Mello, who runs the 4th District BLOG, wrote to the group in March. “I have dubbed the project OPERATION ALLENTOWN (as in which town does Cindy live in????).”

Mello in his email included an embedded YouTube link to the Billy Joel song “Allentown.” 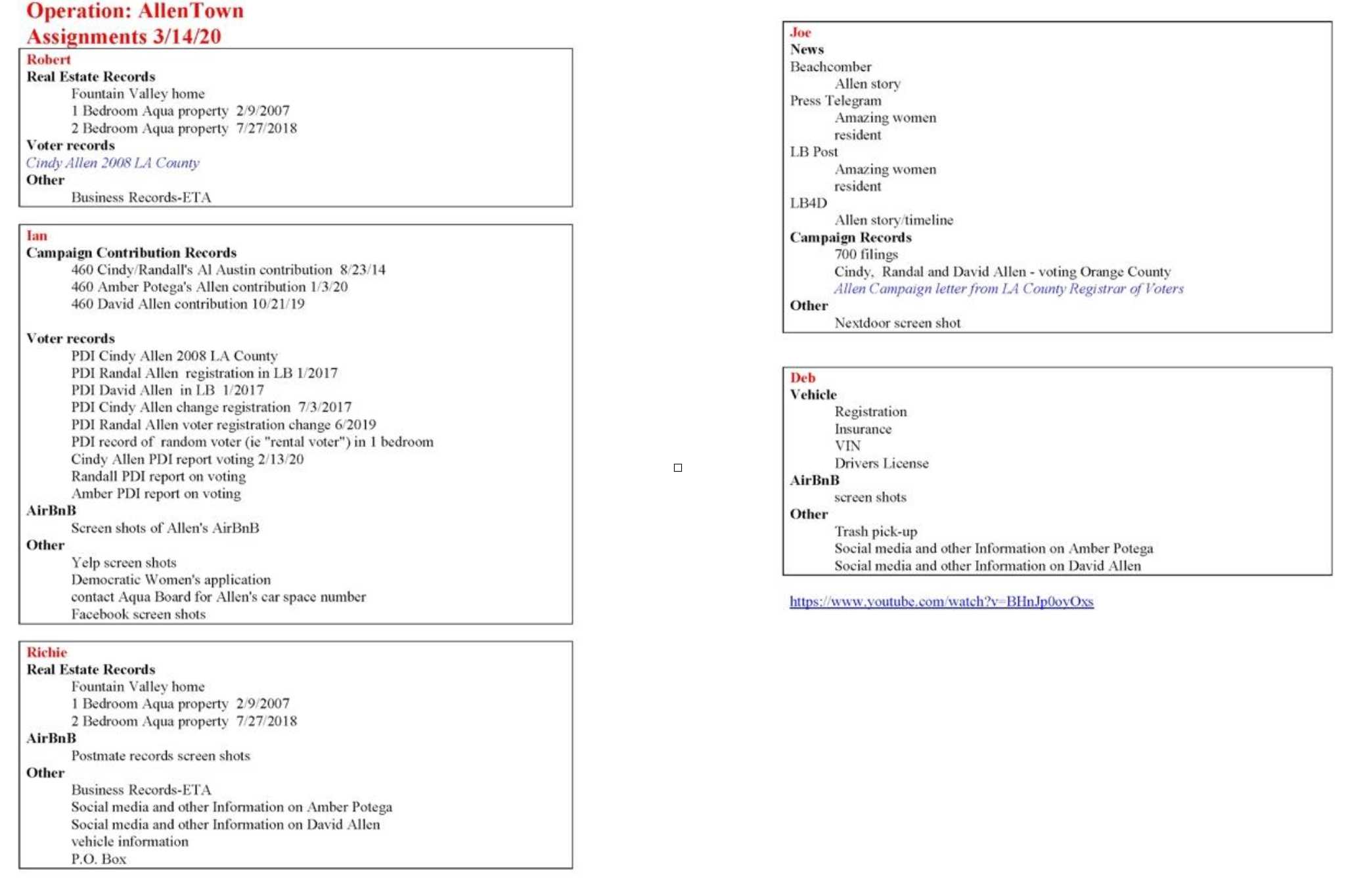 Charley said in an interview this week that he later had a change of heart when he felt that the Fox campaign had crossed the line into dirty politics.

He said his crisis of conscience led him to provide Allen with a large cache of saved emails, photographs, screen shots and audio clips detailing some of the specific actions undertaken by Fox, Patton and their associates. Allen then released those records to the media, and also filed a complaint with the city prosecutor’s office, the district attorney’s office and state election watchdogs.

Charley has said he was following orders, but none of the information reviewed by the Post indicates that Fox or Patton had asked him specifically to spy on Allen.

Fox’s campaign in a press release Wednesday hit back, alleging that Charley is mentally unstable.

“In case one might have thought the Cindy Allen campaign could not stoop any lower, Ms. Allen has now decided to exploit an apparently bipolar, mentally ill individual, who previously reached out to our campaign,” the statement said.

Fox, in an interview this week, denied any wrongdoing and said he repeatedly told Charley to stop when he learned about some of his actions. Fox said he kept his distance because he believed Charley was becoming increasingly unhinged.

“I tried to stop him but that train had left the station,” Fox said. “The biggest hassle I’ve had is trying to keep him out of my life.” 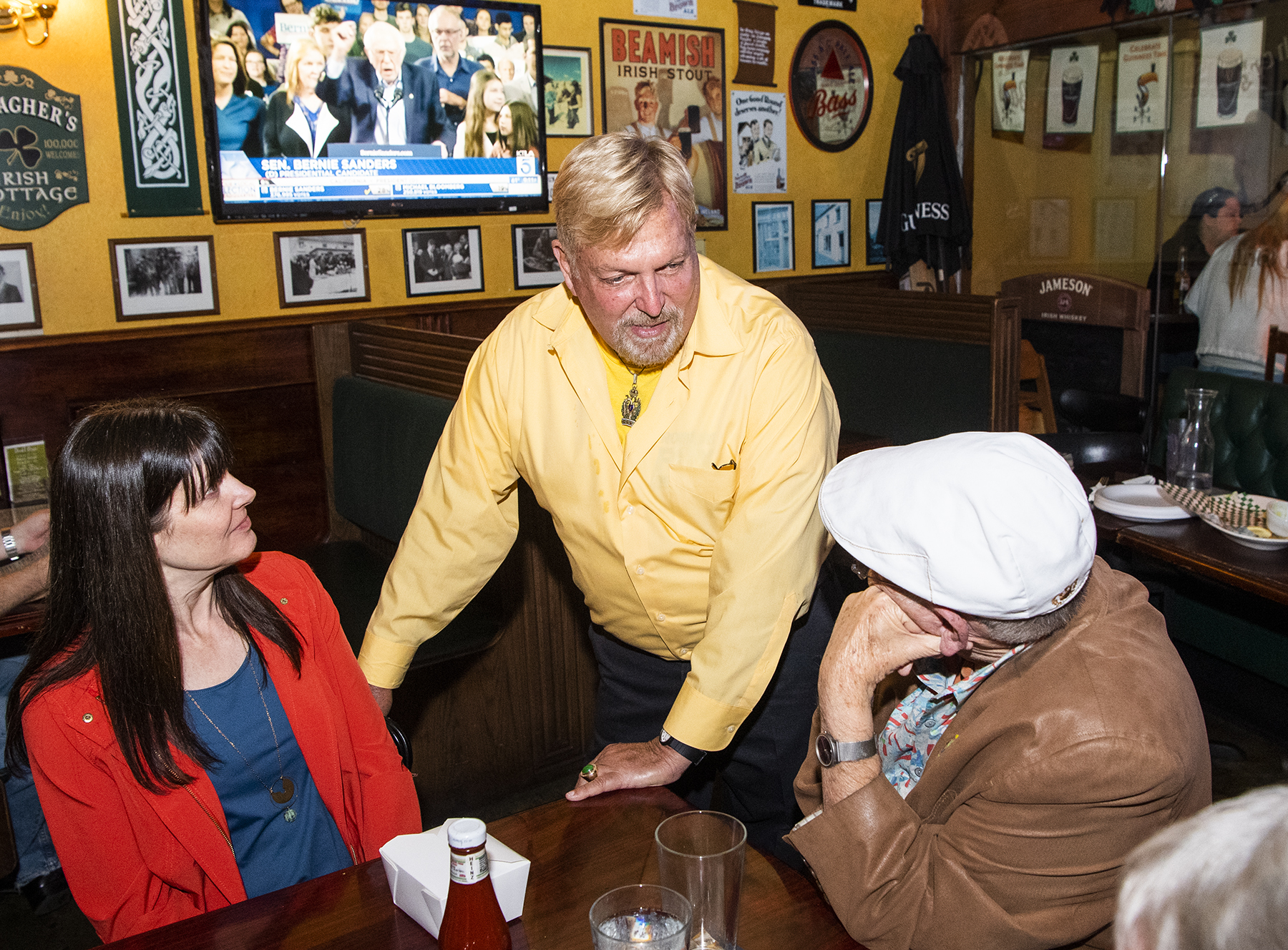 Candidate Robert Fox for the 2nd District City Council talks to supporters while at campaign party in early 2020. Photo by Thomas R. Cordova.

But he wasn’t discouraged in some cases.

In one email, Charley told Patton that he was going to follow Allen to Fountain Valley. Patton responded, “careful, but i love it Rich..  you are the ultimate intrepid!!”

Patton this week said Charley was never involved in the campaign and that he acted independently. Patton said he and others treaded carefully out of concern for Charley’s mental health.

“We were humoring a guy who was off balance and just trying to keep him calm basically,” he said.

Patton said he was aware of some of Charley’s initial activities but didn’t realize the extent of it until a friend of Allen’s who was living in the home said she was being harassed. Patton said he had never asked Charley to do any spying.

Charley, for his part, insists that he was asked to investigate Allen.

“Ian can say I’m crazy, but he sure didn’t think I was crazy when I was doing work for them,” he said. 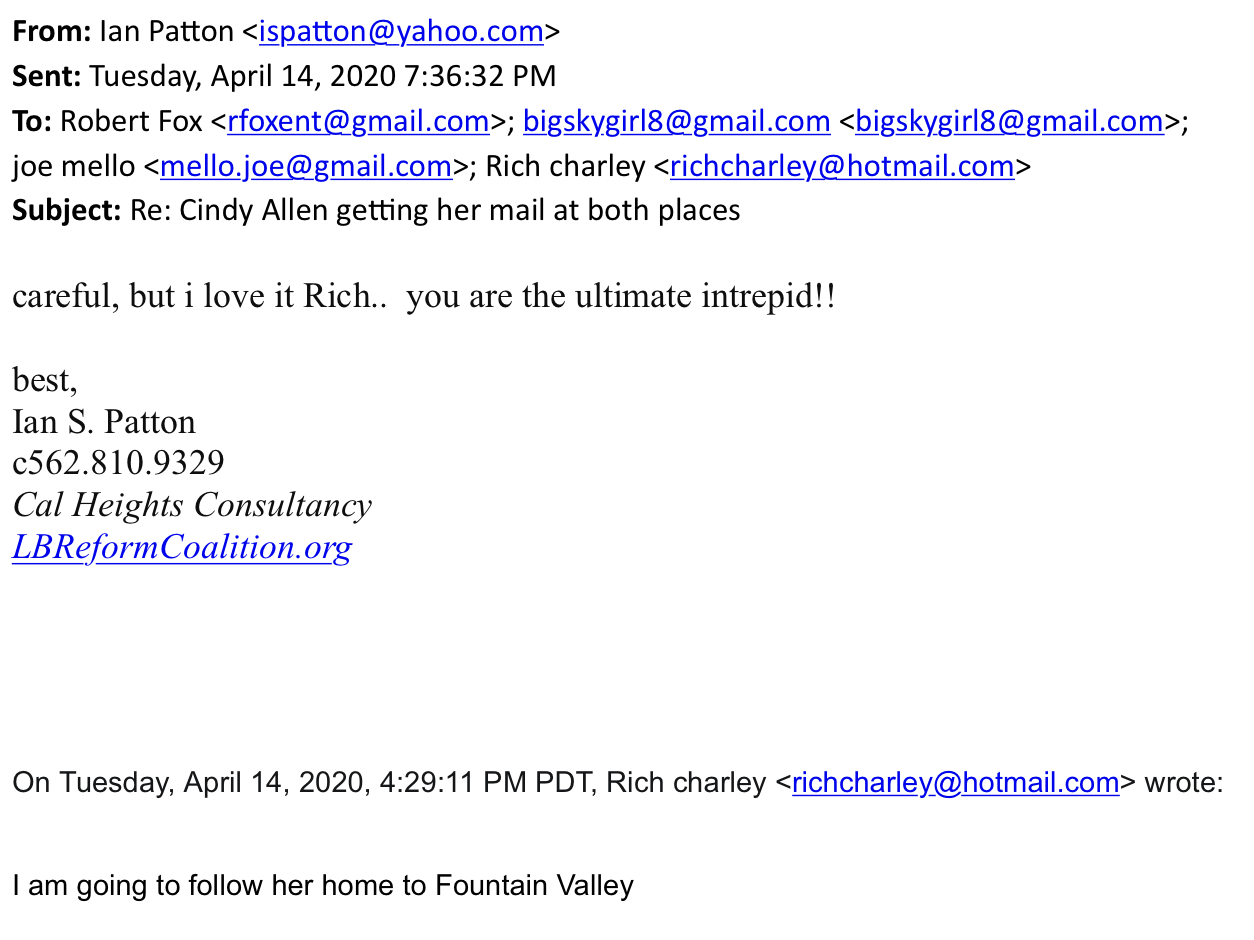 Allen said she’s rattled by the situation and believes that some of the evidence Charley has presented to her amounts to criminal activity.

“I don’t think that anyone running for office should have to put up with these type of tactics from an opponent,” she said.

Long Beach City Prosecutor Doug Haubert in a statement said he is investigating a complaint “regarding a number of acts which, if true, could violate state laws.”

“The allegations are not Elections Code violations, but they focus on conduct by a candidate for Long Beach City Council seat and are in connection with that candidate’s campaign,” he said.

Allen said she was particularly upset by a photo of what appears to be Fox supporters inspecting her garage door. 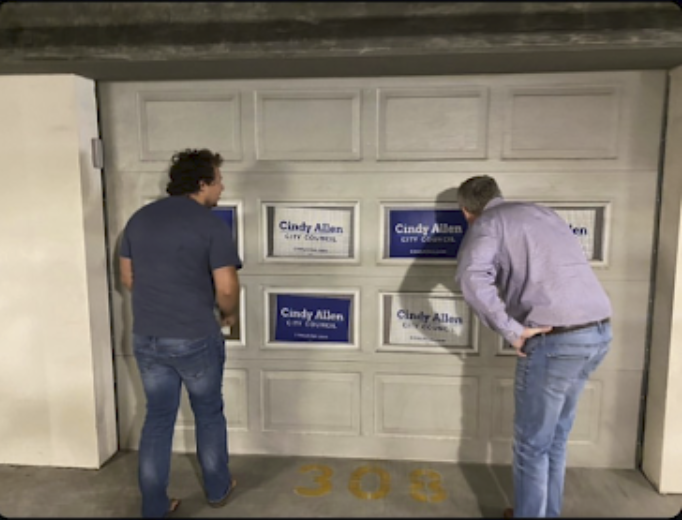 Allen said she believes Fox associates have also flown drones past her home, set up fake social media accounts under her name and have conducted illegal background checks on her family members.

Patton said the campaign has never done any illegal activity, but he’s OK with supporters investigating Allen to uncover “corruption.”

“I would be perfectly fine with either professionals or well-behaved, respectful private citizens investigating whether somebody is committing a felony while running for office in Long Beach,” he said.

Among the accusations, Fox’s campaign has alleged that Allen for years committed voter registration fraud by living in her Orange County home while registering to vote in her Long Beach condo for political gain. Allen and her husband own three homes—two condos in a Long Beach high rise and a house in Fountain Valley.

Voting records show that Allen over the past decade has voted in more than a dozen elections using the address of her one-bedroom Long Beach condo, though two other acquaintances also registered to vote using the same address and subsequently voted in some of the same elections. Allen insists she is a long-time Long Beach resident, and the City Clerk has affirmed she is an eligible candidate to run for the District 2 seat.

Critics have also questioned the recent sale of Allen’s local advertising company, which has done extensive business with the city. City records show the company’s business license expired in August. The new owner, Ivana Cummins, could not be reached for comment.

Allen said she has sold the business but a non disclosure agreement bars her from providing proof of the sale. This week she provided an email from her attorney, Curtis Herron, reminding her that a confidentially agreement states that she is not to say anything about the company.

Allen said she knew the 2nd District race would be difficult, but her opponent’s alleged actions have crossed the line.

“They should call it ‘Crazy Operation Allentown’ because you can’t even make this up,” she said.

Editor’s note: Cindy Allen is a former owner of the Long Beach Post, but has had no involvement with the Post since selling the publication to Pacific Community Media in 2018.