Long Beach police were on alert for the possibility of civil unrest Saturday night but said they so far hadn’t seen any problems, even as National Guard troops were being sent into Los Angeles after protests over police brutality gave way to violence.

Garcetti said he asked Gov. Gavin Newsom for 500 to 700 members of the Guard.

“The California National Guard is being deployed to Los Angeles overnight to support our local response to maintain peace and safety on the streets of our city,” the mayor said on social media.

In Long Beach, police said they were monitoring the situation in LA but so far had not had any confrontations with demonstrators decrying the death of George Floyd at the hands of police in Minneapolis.

A protest was scheduled in Long Beach for Sunday afternoon, but as of Saturday night the city hadn’t seen any major demonstrations after video of a Minneapolis police officer kneeling on Floyd’s neck sparked outrage across the country.

“I’m really worried about what I see on television and I hope it doesn’t happen here,” LBPD chief Robert Luna said Saturday morning at a food distribution. 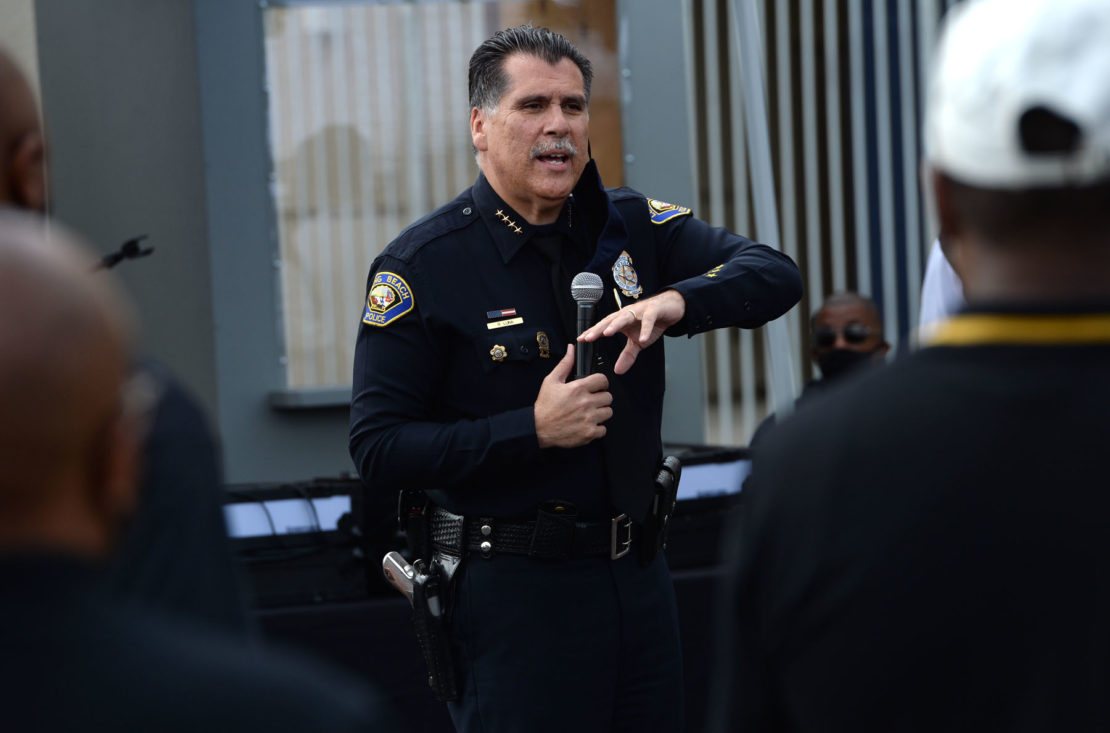 Long Beach Police Chief Robert Luna speaks with volunteers as they attend a second food distribution for Long Beach families at Jordan High School, in response to COVID-19. The event was in partnership with Community Action Partnership of Orange County, Alpha Phi Alpha and Power of One Foundation. Saturday, May 30, 2020. Photo by Stephen Carr.

Long Beach police were on a modified tactical alert, meaning more officers would be in the field and they were deploying from other areas of the city, LBPD Lt. Greg Schirmer said. Schirmer said he wasn’t aware of any National Guard activity in Long Beach in response to protests in the region.

“While we haven’t had any civil unrest here, we’re aware of what’s going on elsewhere,” Schirmer said.

For example, a few hundred chanting demonstrators marched through San Francisco, while northeast of San Diego police fired tear gas to try to break up a large group that defied orders to leave the La Mesa police headquarters.

In LA, a mostly peaceful demonstration occurred Saturday near the Grove, a popular outdoor mall in the middle of the city, but it devolved in the afternoon when protesters set several Police Department cars on fire, broke store windows and climbed on top of a bus.

Police used batons to move protesters back and shot rubber bullets to scatter the crowd.

“I am asking for all of Los Angeles to come together and find the ability to peacefully express individual and collective grievances while also maintaining the safety of all of Angelenos,” he said. 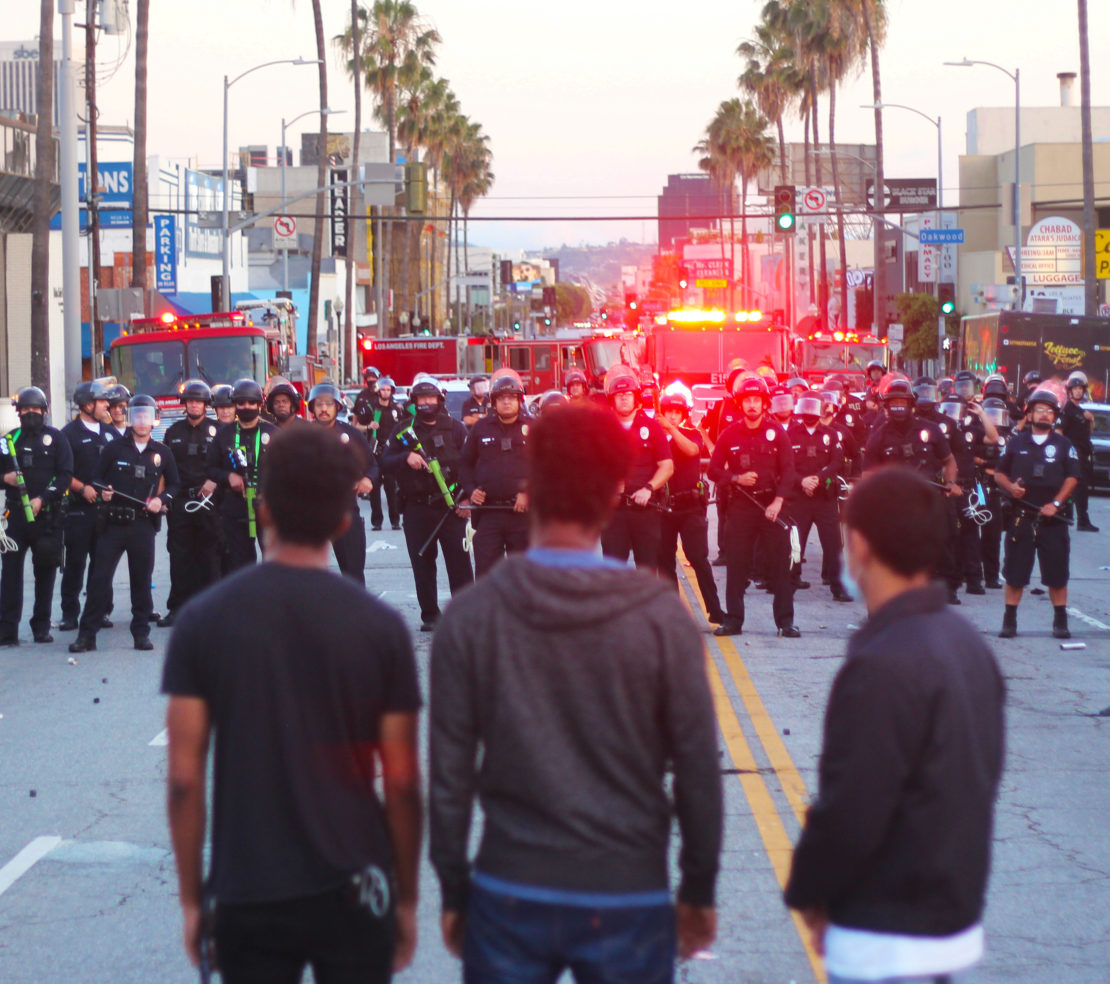 Protestors in Los Angeles stand in front of a police line, Saturday, May 30, 2020. Photo by Brandon Richardson.

Garcetti initially imposed a curfew on the downtown area, where hours of clashes occurred Friday night. But he quickly expanded it to the entirety of the city as the violence focused on an area about 6 miles to the west.

Adjacent Beverly Hills and West Hollywood followed as demonstrations spread into those cities. Other cities in the county also began imposing curfews, although Long Beach had not followed suit as of Saturday night.

“We cannot allow this city to spiral into anarchy,” Chief Moore told ABC7 at the scene of one clash. “We have a city of 4 million people in a region of 10 million people. Our community will decide what happens tonight.”

Social media video posts showed marchers chanting “Eat the rich” in Beverly Hills, where a crowd broke into a high-end boutique and fled with merchandise.

The governor said earlier that authorities were closely monitoring organizing by violent extremist groups who may be trying to use the protests for their own agendas.

“To those who seek to exploit Californians’ pain to sow chaos and destruction, you are not welcome,” he said. “Our state and nation must build from this moment united and more resolved than ever to address racism and its root causes.”

In Oakland, 13 officers were injured late Friday as demonstrators hurled objects at them. A federal contract security officer was killed and another critically injured when a vehicle pulled up to the Ronald V. Dellums Federal Building and someone opened fire. The officers guard the U.S. courthouse as part of their regular duties and were monitoring the protest, Department of Homeland Security officials said.

It wasn’t immediately known whether the shooter had anything to do with the protest. 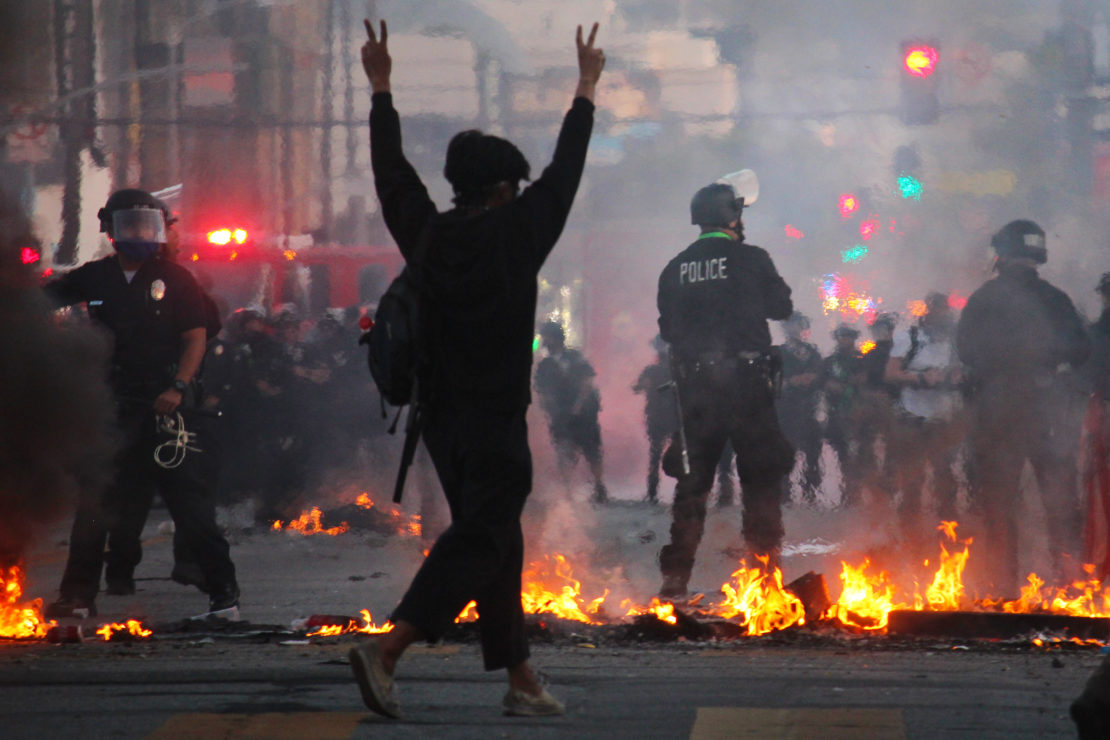 A protestor in Los Angeles throws up peace signs while debris burns, Saturday, May 30, 2020. Photo by Brandon Richardson.

The death of 46-year-old Floyd, who was recorded on video pleading for air as a white Minneapolis officer pressed a knee on his neck, has shocked the country and produced violence in numerous cities. Police chiefs and police unions have called it unjustifiable and excessive force. The officer has been charged with murder.

The LAPD said 533 people were arrested between Friday night and early Saturday after ignoring repeated orders to disperse when authorities declared an unlawful assembly. They faced a range of charges, including burglary, battery on a police officer, attempted murder, probation violation and failure to disperse. All but 18 were released on their recognizance.

In the San Francisco Bay Area, protests in Oakland and San Jose grew increasingly tense and confrontational Friday night. Small fires were set inside a Walgreens and a Mercedes-Benz dealership on Oakland’s auto row, where several cars were smashed and spray-painted with graffiti. City officials said more than 70 businesses were vandalized.

“This is not who we are,” Mayor Libby Schaaf said in a videotaped statement Saturday. “We must fight the travesty of racism, but we must do it in a way that works. Let’s not destroy or harm our own community.”

In San Jose, a Santa Clara County Sheriff’s deputy fired at an SUV that attempted to drive through a group of protesters, striking two of them while attempting to make a U-turn, the East Bay Times reported. 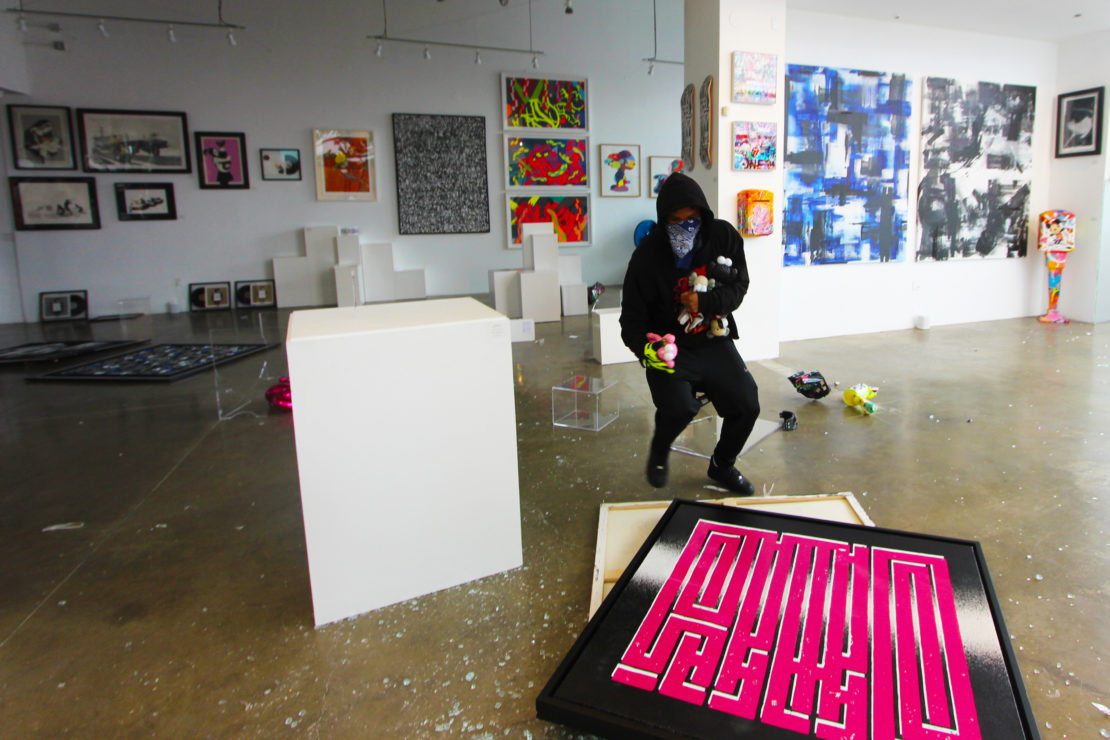 A looter steals art from 5Art Gallery in Los Angeles, Saturday, May 30, 2020. Photo by Brandon Richardson.

Police in both cities fired tear gas and flashbang grenades to break up unruly crowds.

Oakland police said in a preliminary report that at least 18 people were arrested and another 60 detained for investigation of stealing.

In Sacramento, nine police officers sustained minor injuries at a protest that drew about 500 people.

In Bakersfield, police arrested a man they said drove recklessly through a crowd of protesters, striking a 15-year-old girl and causing minor injuries. Officers monitoring the protest noticed that Michael Tran, 31, passed by the crowd several times and appeared to be talking to the protesters, possibly antagonizing them, police said.

He was booked into jail for investigation of attempted murder.

Police said a number of protesters blocked a roadway, threw bottles and rocks at officers and vandalized a memorial dedicated to fallen officers. Ten people were arrested for resisting and obstructing officers.