Downtown Long Beach is bracing for the possibility of unrest after protests in Los Angeles over police brutality gave way to looting and vandalism in some areas last night.

By Sunday morning, Long Beach police headquarters was surrounded by barricades and officers were preparing for the possibility of a large crowd at an afternoon rally decrying the death of George Floyd during an arrest by a Minneapolis police officer who has since been fired and charged with murdering him.

“We are hoping 100 percent for it to go peacefully,” LBPD Lt. James Richardson said.

It wasn’t clear who originally called for the Sunday afternoon protest outside LBPD headquarters, but local chapters of Black Lives Matter and the Democratic Socialists of America have signaled their support.

One DSA organizer said the protest was an “organic action put together by random community members” after a video showing a white Minneapolis police officer pressing his knee into Floyd’s neck for minutes on end sparked outrage.

Local Black Lives Matter organizer Dawn Modkins said she was frustrated by the LBPD’s posture and decision to erect barricades even before the protest began.

So we can get Grand Prix style barriers around the police department overnight but can’t open libraries on mondays? At 3PM today we will be demanding defunding of the LBPD at their HQ pic.twitter.com/gzYwRsivAR

So far, Long Beach has not instituted a curfew or declared a state of emergency as other parts of LA County have.

“We don’t have any activity right now,” LBPD spokeswoman Karen Owens said Sunday morning. “A curfew is always a tool that’s available if the circumstances warrant it.”

The department is operating on a modified tactical alert, meaning police have the ability to quickly call in extra officers.

“We are prepared for anything citywide,” Owens said.

Long Beach has not requested any help from the National Guard other than medical personnel, who were already assisting with COVID-19 testing, Owens said. 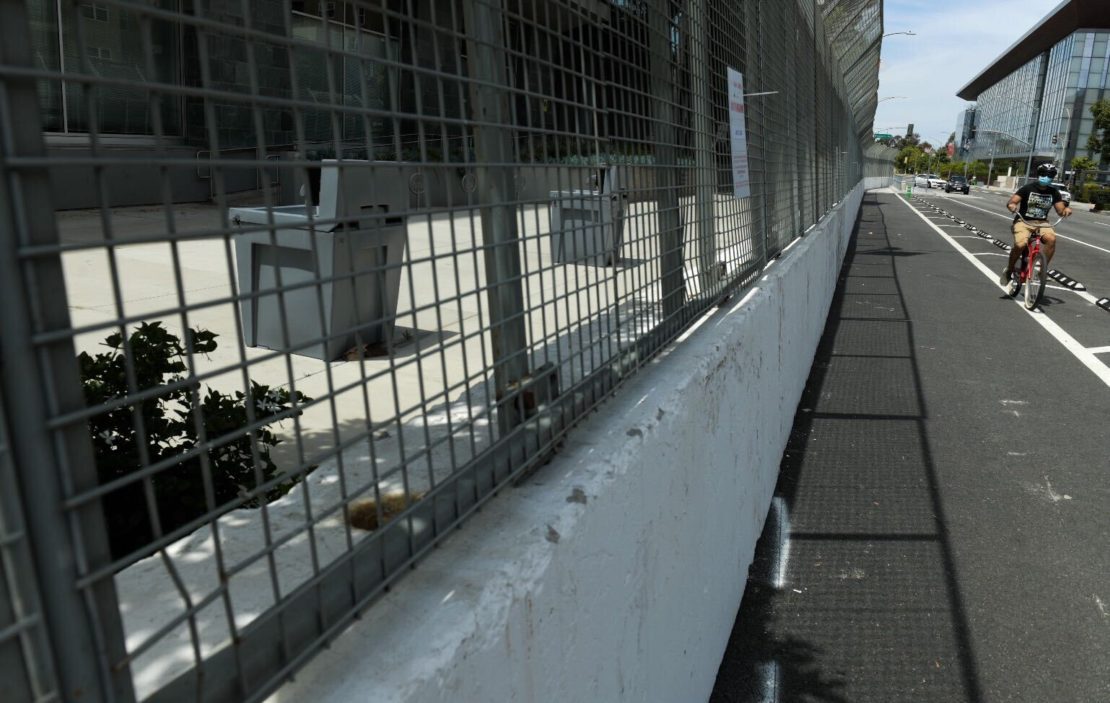 At least 500 National Guard troops were sent to LA after Mayor Eric Garcetti requested them to assist the 10,000 Los Angeles Police Department officers.

Garcetti said the Guard members who arrived early Sunday were summoned “to support our local response to maintain peace and safety on the streets of our city.”

Fire crews responded to dozens of blazes, and scores of businesses were damaged. One of the hardest-hit areas was around the Grove, a popular high-end outdoor mall west of downtown where hundreds of protesters swarmed the neighborhood, showering police with rocks and other objects and vandalizing shops. One officer suffered a fractured skull, Los Angeles Police Chief Michel Moore said. 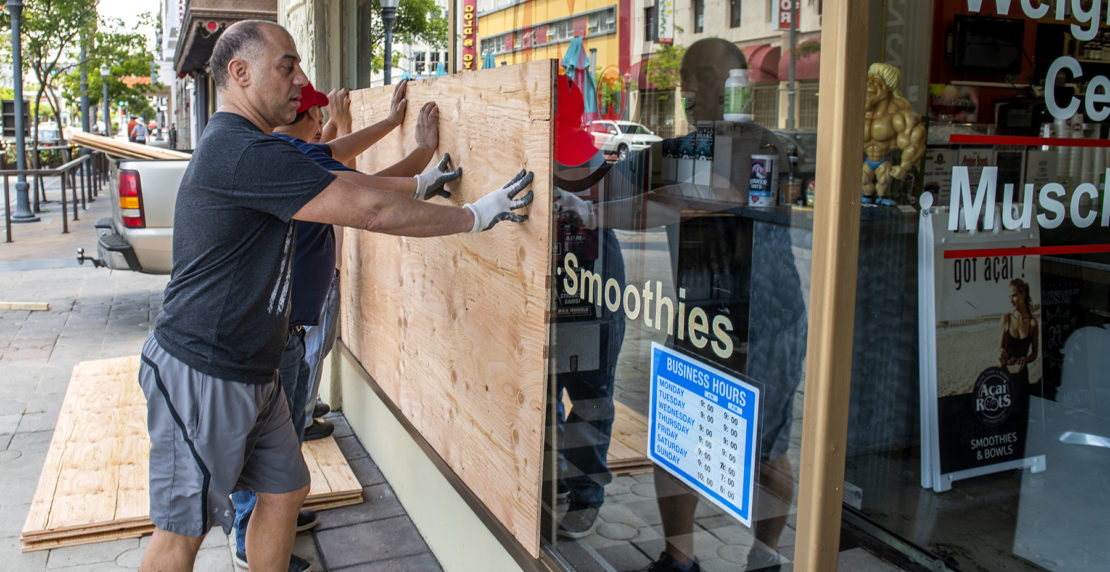 Hasuni Kahwaji , owner of Max Muscle, boards up his business on Pine Avenue ahead of the protest in Long Beach Sunday, May 31, 2020. Photo by Thomas R. Cordova.

Community leaders denounced the violence that has accompanied protests over the death of Floyd. His death has prompted protests across the US and Europe.

In LA, windows were shattered at nearly every shop along a stretch of Melrose Avenue. At Tony K’s Shoe Store, owner Alan Kokozian said his entire product stock was either stolen or damaged.

Kokozian said he was hit in the head with a flying bottle as he pleaded with looters to spare his establishment Saturday evening.

In Long Beach, some businesses were taking precautions. A few Downtown stores and restaurants that had been laying plans to reopen after closing for the COVID-19 pandemic were now boarding up their windows.

Businesses are boarding up along Pine Ave in Downtown Long Beach ahead of the #GeorgeFloydprotest here later today. We’ll be out here covering it. @LongBeachPost pic.twitter.com/LCYHMBnalw

Target also announced it was temporarily closing 46 stores in California and 105 stores across the country after several were broken into during protests in Minneapolis.