“The bright spot is that number is much lower than we’re seeing other parts of the state and country,” he said of those declining the vaccine.

Long Beach is also moving forward as planned in its vaccinations for nursing home residents and staff, emergency responders and other healthcare workers. Starting next week, the city will move to the second phase, which includes teachers, grocery workers, people over 75 and others in emergency management.

The news comes as the city on Wednesday reported 20 COVID-related deaths in one day and a record 40 deaths within a week. Overall, the city has seen 440 fatalities.

Long Beach Health Department Director Kelly Colopy noted that 573 people were hospitalized with COVID in the city’s five area hospitals, up from just 34 people on Nov. 5.

On Wednesday, the city 1,032 new daily cases for a total of 36,696—half of which were reported in December alone.

“We want to make sure everyone understands the impact and incredible scope of what’s going on,” Colopy said.

While the numbers are troubling, Garcia said the city is proud of its vaccination program, which is moving at a faster pace than other regions.

“It’s better than some of the horror stories we’ve heard,” he said.

Garcia said the city will help staff at smaller medical clinics that may not have had access to the vaccine. Starting next week, the city will offer vaccine clinics for eligible residents as it prepares for larger groups to be vaccinated.

While the effort is moving forward, the mayor said the vaccine will likely still not be available to the general public until late spring or summer.

“No one is going to be left behind,” he said. “Everyone that wants a vaccine will get a chance to have a vaccine.”

At Bixby Knolls Towers on Wednesday, 88-year-old resident Jose Gutierrez, took off his navy sports coat, rolled up his left sleeve and prepared for a shot of the Pfizer vaccine.

“Just a little pin prick,” he said. “I believe in the science and if the doctors say to get it, I’m gonna get it.”

Gutierrez was one of dozens of residents and staff waiting in line at the Bixby Knolls long-term care facility as the city rolls out its plan.

A retired Navy man who worked in the payroll department at Cal State Long Beach for years, Gutierrez said he feels lucky that he’s able to receive the vaccine as a nursing home resident.

“This will keep me safe but I still have to do my part,” he said. 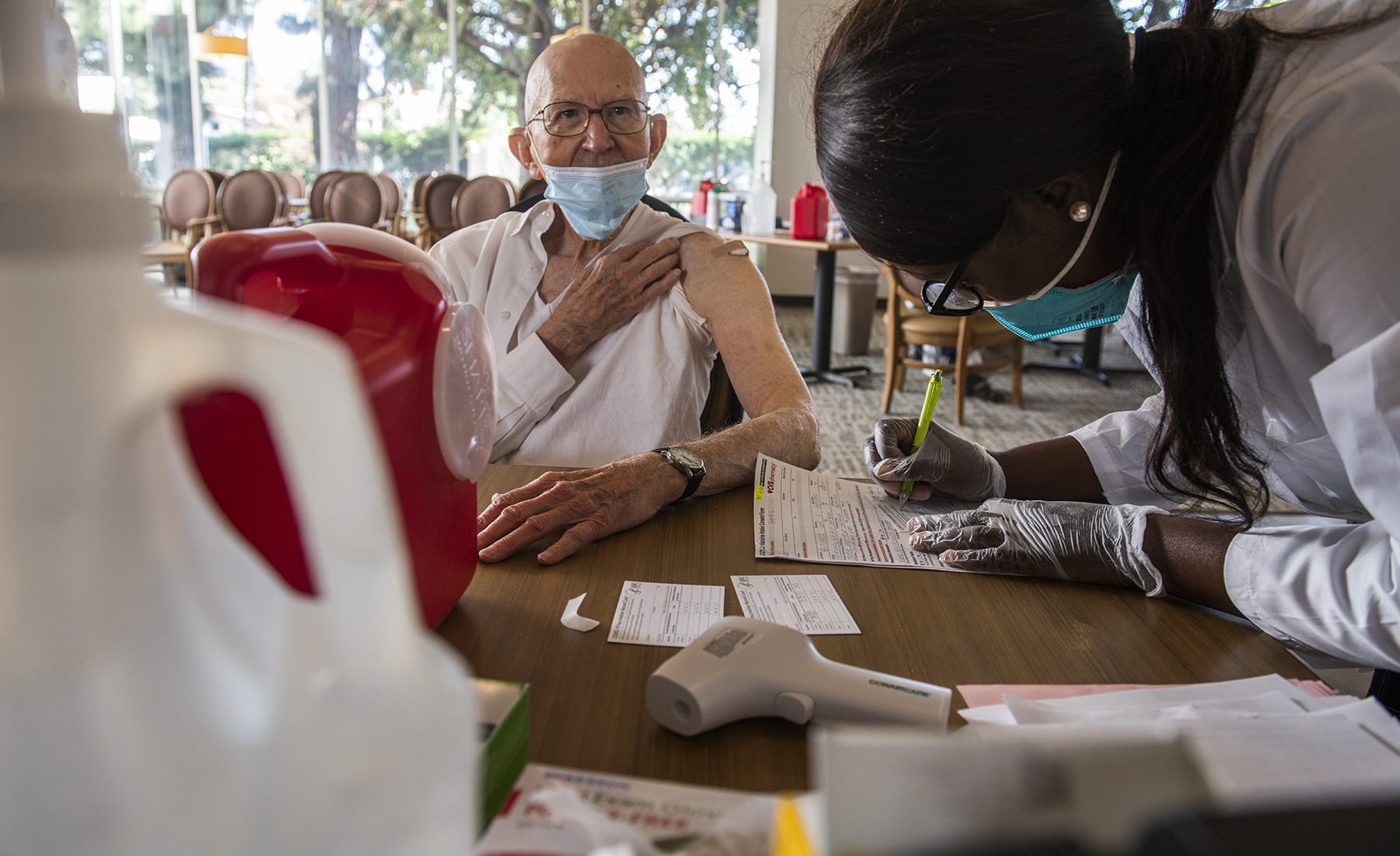 Jessica Ogunleye does the final paperwork after delivering the COVID-19 vaccine to Jose Gutierrez, 88, as senior residents and staff at Bixby Knolls Tower receive the vaccine in Long Beach Wednesday, January 6, 2021. Photo by Thomas R. Cordova.

Like the majority of long-term care facilities in Long Beach, Bixby Towers was also hit with COVID-19 last year, but its numbers were lower than many other facilities.

As of Monday, the facility had reported a total of 29 cases among staff and residents and three deaths. 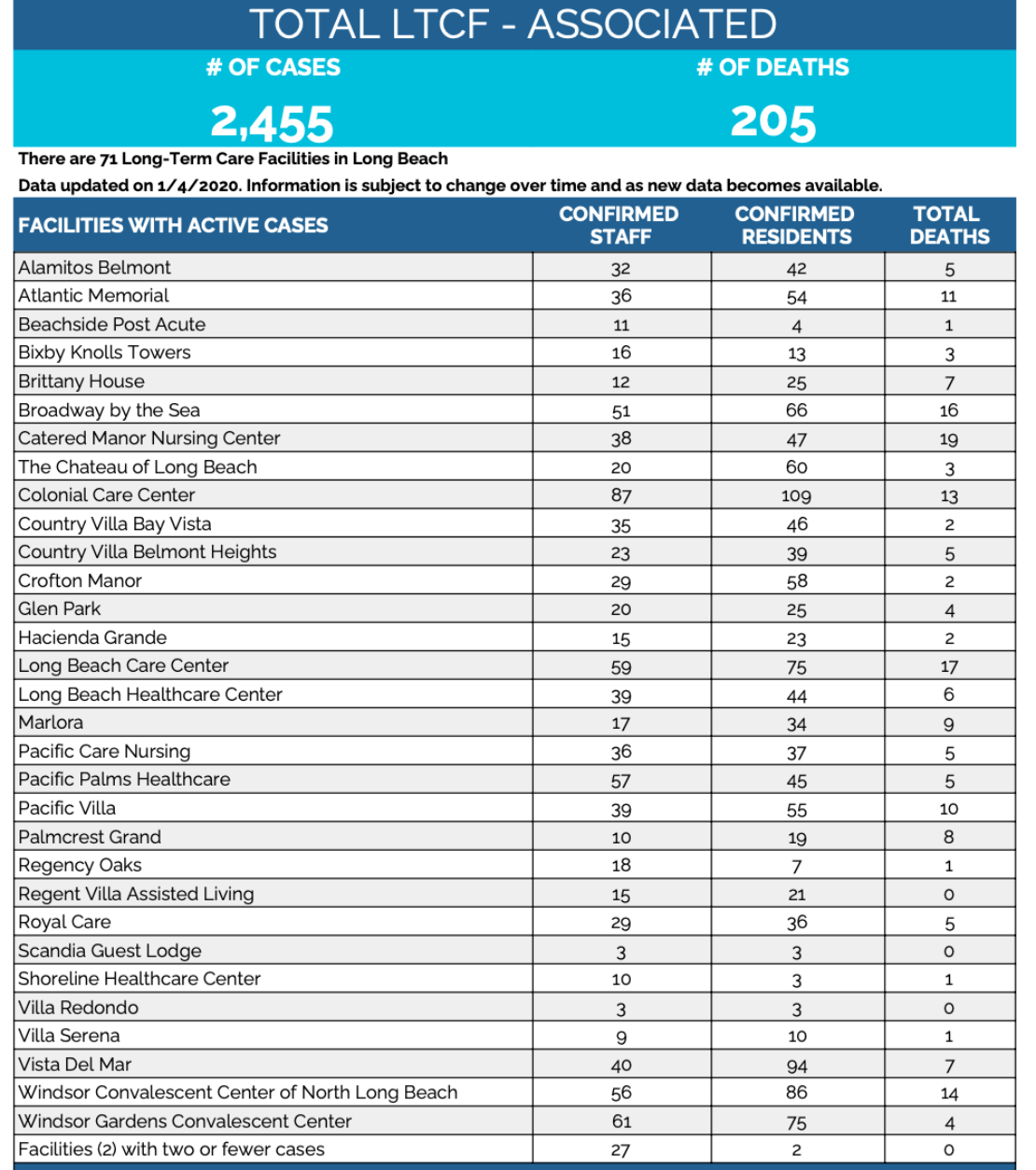 Dr. Laverne Joseph, president and CEO of Retirement Housing Foundation, a Long Beach-based nonprofit that runs nearly 200 long-term care facilities in 29 states, said administrators worked quickly to implement health mandates early in the pandemic, which had an impact on the number of cases.

Bixby Towers received 445 doses of the Pfizer vaccine this week that it will distribute to residents and staff.

Joseph said he hopes everyone will soon be vaccinated.

“I’m hoping it will make a difference in the death rates,” he said.