It’s been called the fastest growing sport in the country, and Long Beach players hope to soon see more courts across the city under a new “Pickleball Master Plan.”

The game of pickleball, described as a cross between tennis, ping-pong and badminton, has exploded in popularity in recent years thanks to its friendly competition and easy-to-learn rules.

According to a report this year from Sports and Fitness Industry Association, participation in pickleball surged nearly 40% between 2019 and 2021 with an estimated 4.8 million players.

But while other cities, like Cerritos and Seal Beach, have dozens of designated courts, Long Beach still has just one dedicated court at Bayshore Park in Belmont Shore.

With few places to play locally, Long Beach pickleball teams have resorted to traveling to other cities or bringing their own nets to set up on tennis courts, which has led to run-ins with tennis players at parks like Somerset Park in the California Heights neighborhood.

Hoping to get with the times, the city this year formed a pickleball advisory group to explore adding more courts across the city while also considering tennis players and others using the park spaces.

The short-term suggestions include adding dual-stripped courts in Bayshore, Marina Vista and Somerset parks, while long-term plans include building a dedicated pickleball complex in an unused area near the Billie Jean King Tennis Center for $450,000 from the city’s Measure A funds.

The City Council will consider the master plan later this year.

For now, Long Beach is adding signage with designated times at some courts to minimize conflicts between pickleball and tennis players.

Dennis said he expects the demand to grow. Last year, he toured the dedicated courts in Seal Beach and found that most of the players were Long Beach residents. Also a fan, Dennis said he was bitten by the pickleball bug while visiting his parents in Florida.

“It’s clearly Long Beach’s biggest unmet recreational need,” he said. “And it’s good for people that want to stay active that love tennis but it’s not quite as grueling or physically challenging for your joints.”

On Wednesday at College Estates Park, a group of about a dozen pickleball players swatted a perforated plastic wiffle-like ball on a set of re-striped tennis courts.

Retired Long Beach resident Gary Ballard, a member of the city’s advisory group, has been playing pickleball for 15 years and said the sport gained traction in the pandemic when people were itching to go outside. He said the sport is friendly for all ages and genders, and is great for building a social network. 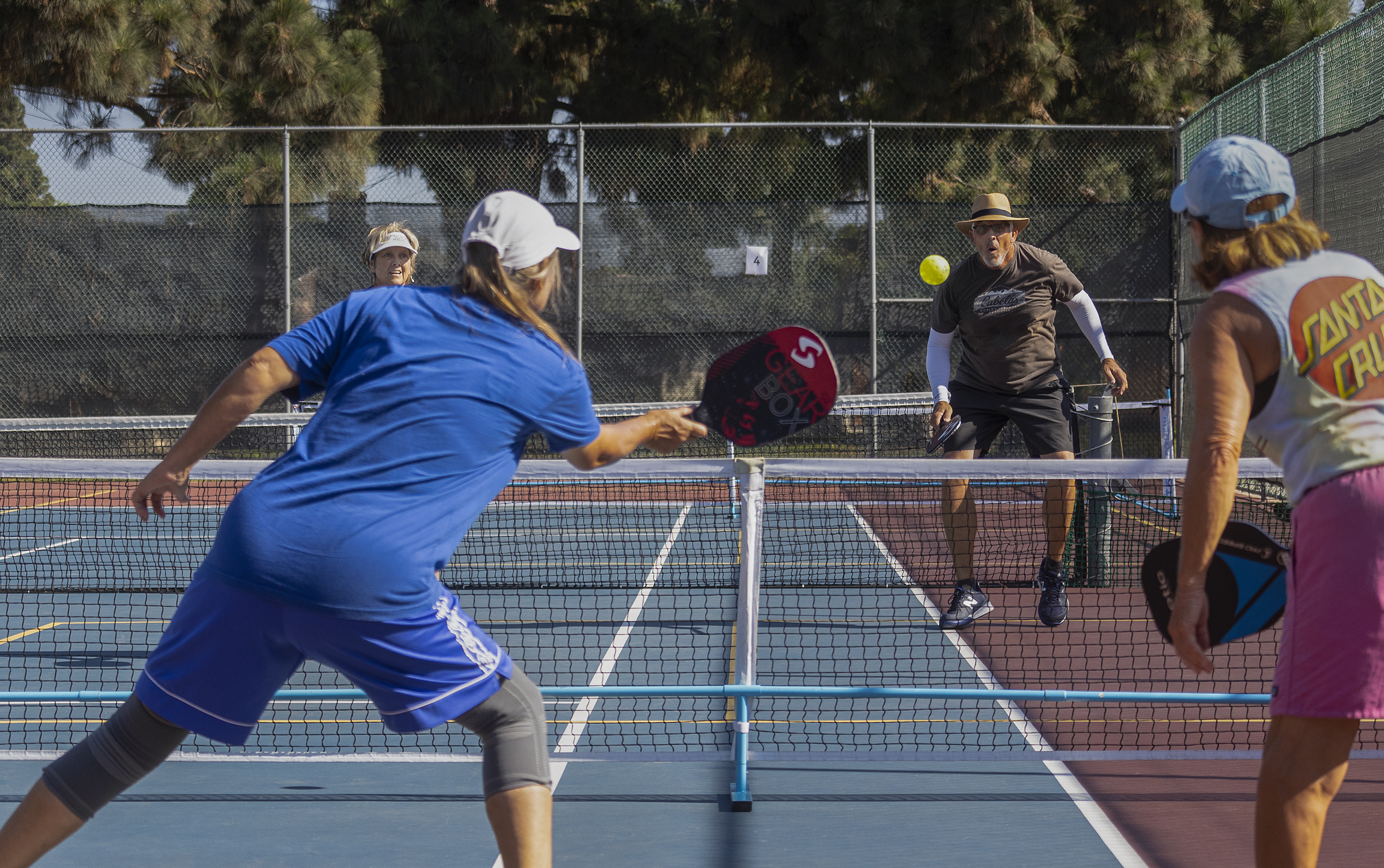 Tom Saddler, 61, prepares for the return from Lisa Hanzen, 60, during a game of pickleball at College Estates Park in East Long Beach Wednesday, Aug. 17, 2022. Photo by Brandon Richardson.

With so many new players in recent years, Ballard said he’s had to travel as far as Pasadena to play on a designated court. He hopes the city will consider adding a permanent complex.

“Long Beach is a big city so they move slow,” he said. “We’re about a year and half behind other cities.”

Angela Meylor, 62, who was out on the court Wednesday, said the sport keeps her in shape.

“I love being outside and I love the connections with people,” she said. “It’s flexible, fun and active, and it’s been a lifeline for me in the transitional season of my life.”

Dennis said players have also seen some pushback from neighborhood residents complaining of the noise—pickleball can be louder than tennis because of the rackets and enthusiastic players—but the city has worked to mitigate that by designating later playing times.

Overall, the newfound sport has been a good thing for the city’s parks, he said.

“A lot of positive activity in our parks is what make the parks more welcoming and safer and respected,” he said.

As for the possibility of more dedicated spaces and a complex near the Billie Jean King Tennis Center, he said the advisory group reached out to King, the famed tennis star, to ask her opinion.

He said King gave them her blessing and said pickleball could be an introductory sport for those looking to graduate on to tennis.

“She loved the idea,” he said. 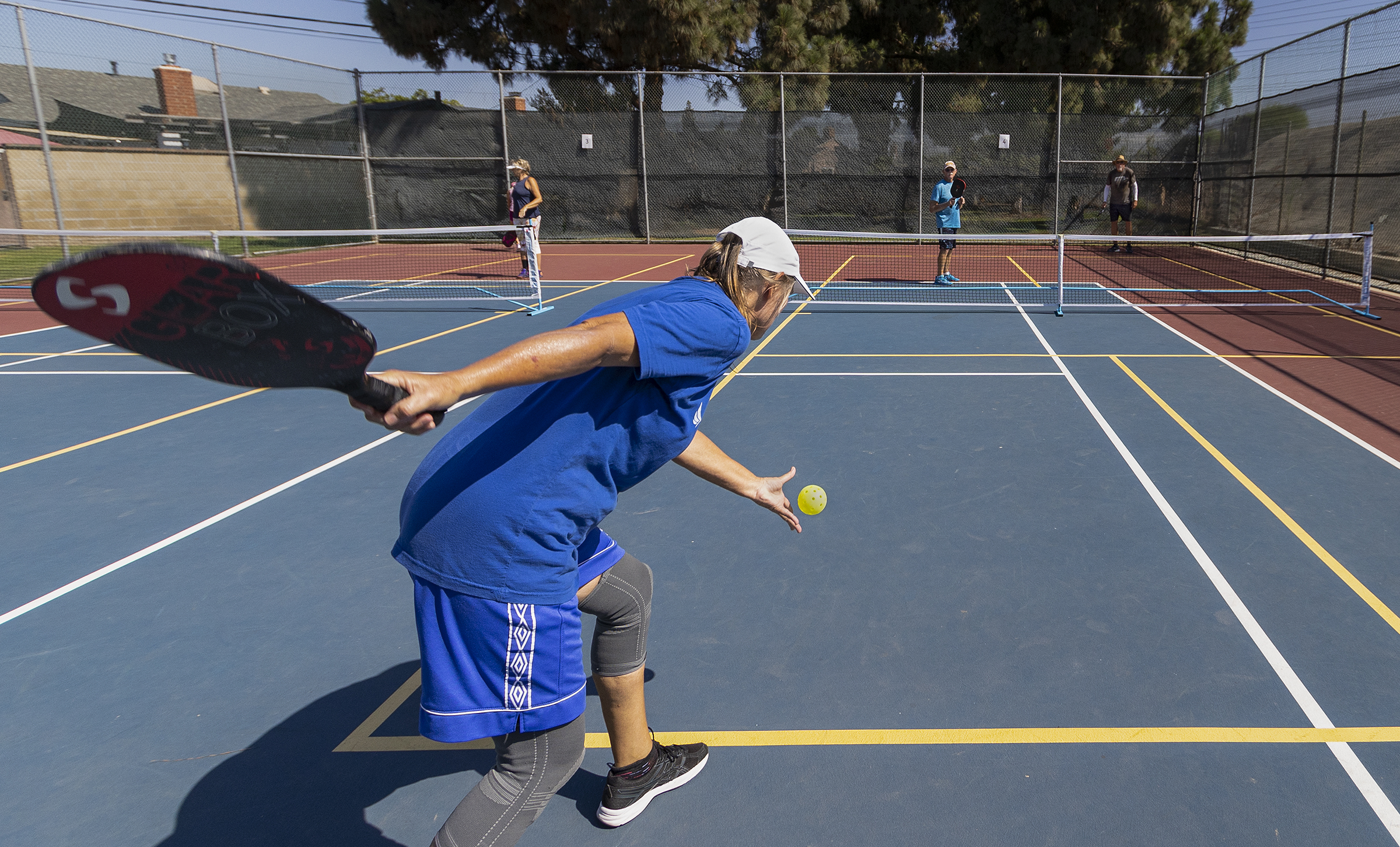