Long Beach city employees were told to head home early “out of an abundance of caution” before the start of a small anti-mask protest outside City Hall this afternoon.

City spokesman Kevin Lee said officials made the move in light of the chaos that erupted earlier in Washington, D.C., where a mob broke into the Capitol building after a speech by President Donald Trump where he, again, made inflammatory and false claims about being cheated out of a victory in the November election.

The local protest ended up drawing only about 40 people. It was promoted as one against coronavirus rules—not one in support of Trump. But some of the scheduled speakers had been promoting the D.C. rally and a gathering in downtown Los Angeles where crowd of about 200 Trump supporters sometimes clashed with police. Several of the attendees in Long Beach waved flags with Trump slogans on them, including “stop the steal.”

Long Beach police also put officers on tactical alert this afternoon because of the violence in the Capitol, although they had no specific reason to believe there would be any problems with the local protest, according to LBPD Administrator Karen Owens.

The group organizing Wednesday’s protest has rallied in Long Beach previously and not caused any issues, Owens said.

The last protest against coronavirus rules in Long Beach only drew a small group to City Hall last month. 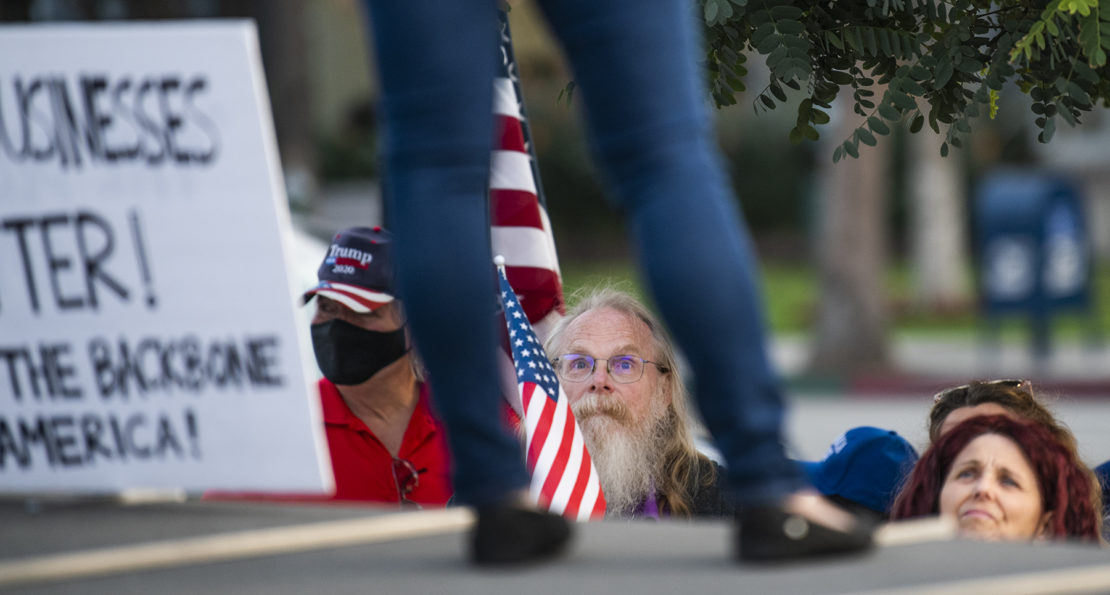 Krishna Murphy, center, listens to a speaker as about 40 people showed up for an anti-mask protest in front of Long Beach City Hall in Long Beach Wednesday, January 6, 2021. Photo by Thomas R. Cordova.

Editor’s note: This story has been updated with the number of people at the Long Beach protest.