Sean McMullen was at a PTA meeting for his daughter’s Fremont Elementary kindergarten class when he noticed no parent had signed up to help with an after school theater program.

With a background and education in theater, McMullen and his wife signed up but little did they know, they were signing on to do much more than help.

“After the meeting, the PTA president ran over to us and said, ‘So you’re going to be running the new theater program,’” said McMullen. “I didn’t realize I was creating a whole new program.”

The initial program that McMullen created set the stage for what the Children’s Theatre of Long Beach would become—an opportunity for kids to learn about theater while also getting the chance to perform.

That year, students performed “The World of Theater,” a show McMullen put together to illustrate theater’s history, set to accompanying music for each major period of theater advancement, McMullen said.

While performing is central to the organization, the emphasis isn’t necessarily on becoming the best performer possible, but more on discovering an appreciation for theater, McMullen said.

“We’re here to create, to give the kids a solid experience in theater that either inspires them to continue on to learn more … but we also want to make great audience members, we want people to appreciate theater and love theater and want theater as part of their lives for the rest of their lives,” McMullen said. “Our goal is (for) the experience that they have to be so fun that they can’t wait to come back and do it again, but in that, they’ve learned something.”

After McMullen’s daughter graduated to middle school, he figured it might be time to move on.

But after the PTA asked him to consider staying, the program began to grow.

“When I go back all the way back to that clipboard and signing up … besides just the fact that I had some experience in theater, it was because I knew my daughter would need a place to be and to find friends and to express herself,” McMullen said. “Not everybody is a sports kid. And not everybody is a chess club member. And the reason it was a success was not just because kids could find like-minds there, but it was also because of what theater can do for the kids. I think a lot of the kids found themselves in theater.”

At one point, about 250 students were involved, which was over half of Fremont Elementary, and soon enough, teachers and parents from other schools began asking for a theater program of their own, McMullen said.

In 2013, the Children’s Theatre of Long Beach officially became a nonprofit, moving on to work on small projects at a local church, and then at Barton and Whittier Elementary.

Most of the nonprofit’s performances stem from classic or modern children’s literature, ranging from Roald Dahl’s “James and the Giant Peach” and “Willy Wonka and the Chocolate Factory”  to E.B. White’s “Charlotte’s Web.” 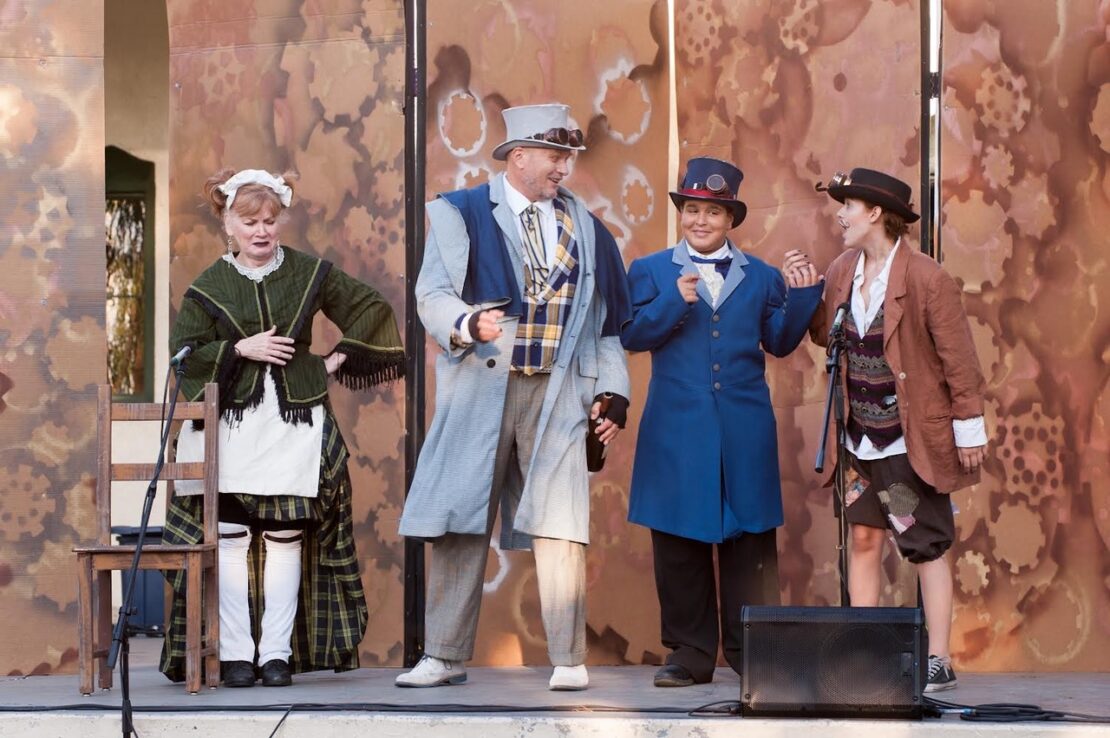 However, McMullen isn’t afraid to steer away from the classics, such as with this past spring’s performance of “Legally Blonde.” In the future, he hopes to put on a performance of “SpongeBob the Musical.”

As the organization continued to grow, so did the staff, extending from just McMullen and volunteers to typically a team of a director, a vocal coach, and a choreographer at each school site.

Some schools even request technical directors, who work on aspects such as set painting and sewing with the students interested in the technical side, McMullen said.

After the past two and a half years of the pandemic, the Children’s Theatre is focused on rebuilding.

Presently, the Children’s Theatre is in the midst of its summer program, culminating with three performances of “Pirates of Penzance” at the end of August at Recreation Park. 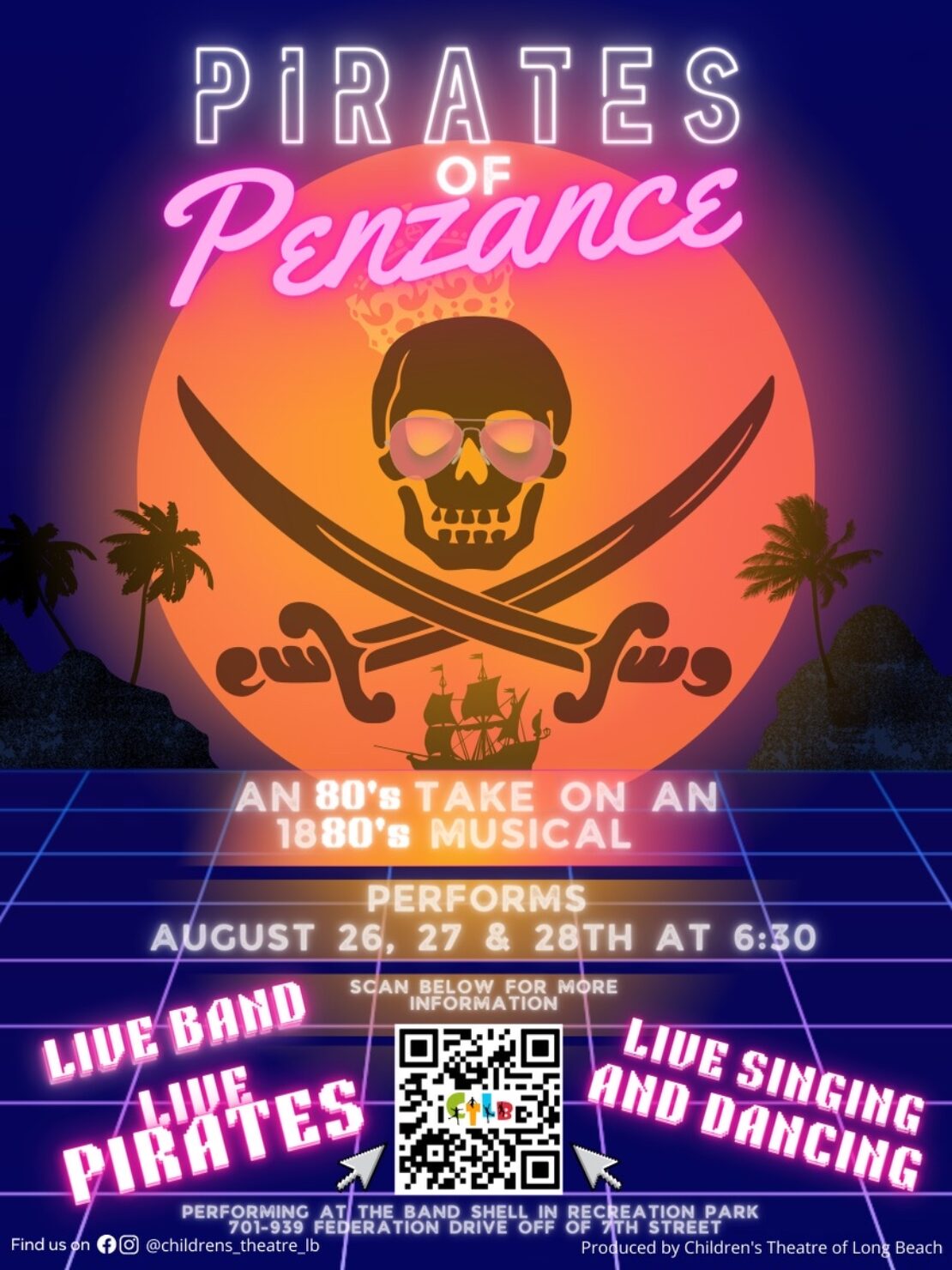 “Pirates of Penzance,” the Children’s Theatre of Long Beach’s summer performance, will be at the end of August in Recreation Park. Photo courtesy of Jeremy Dodgen Photography

“We have someone as young as a third grader, all the way up to people in their 60s in the show,” said McMullen. “It’s a big, wide-open experience, it’s gonna be a fantastic show.”

Currently operating at three school sites, the organization is in the process of potentially expanding to two more schools in the fall, said McMullen.

McMullen hopes that the organization will continue organically growing to its pre-pandemic height, and eventually, that it will have its own theater to call home.

But for McMullen, the organization’s biggest success is allowing youth to feel better about who they are, and more like themselves than when they started, he said.

“Oftentimes, they’ll express something like, ‘I was afraid to get up in front of people before the show, and now I can’t wait to get back on stage,’ or ‘I was afraid to talk in front of people, and now I gave my report in class, and I wasn’t scared at all,’” McMullen said. “What theater does for these kids’ self-esteem and seeing them grow in themselves and grow into their strengths is the biggest achievement I think our company has ever made.”

For information about auditioning for future performances or getting involved in one of the Children’s Theatre of Long Beach programs, check out the organization’s Instagram or Facebook.