The oyster strings, made of oyster shells collected from local restaurants, have served as homes for oyster larvae since they were deposited into Alamitos Bay in mid-May, said Claire Arre, Orange County Coastkeeper’s marine restoration director. They were distributed to about 50 yacht club members to hang near their homes and docks around Alamitos Bay, said Arre.

By placing strings of the shells at a certain depth, researchers hoped to attract native Olympia oyster larvae, which are searching through ocean, looking for something like an old shell to cling to, said Matt Sylvester, OC Coastkeeper’s communications director.

When researchers have finished examining the oyster strings, Arre said they will re-home the oysters at the Jack Dunster Marine Biological Reserve, located north of Naples Island, where they can continue to grow.

Olympia oysters are the only native oysters in California, according to Arre. Historically, they were found along the coast from Southern Alaska to Baja California, but in the last century, pollution, coastal development and over-harvesting led to a significant decline in the species, according to OC Coastkeeper. In Long Beach, the population declined 90%, said Arre.

A similar oyster restoration effort in Upper Newport Bay over the last five years has seen 60-fold growth in Olympia oyster populations, Arre said, though she admitted that initial numbers of oysters there were “tiny.” She hopes to see similar growth patterns in Long Beach over the next few years.

Gehring was the first yacht club member to bring in his oyster strings Sunday, and researchers were immediately able to locate baby oysters, Arre said. 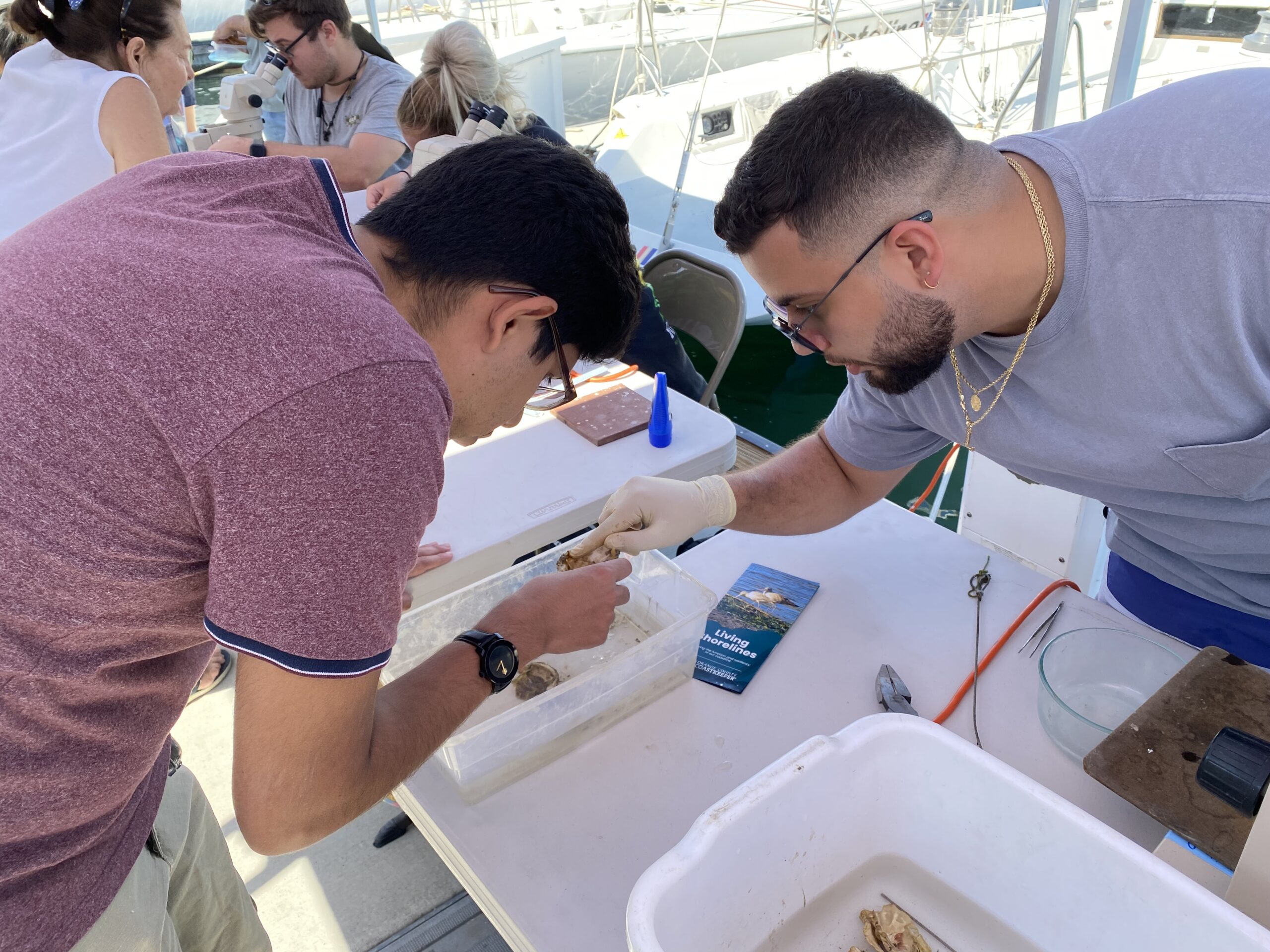 Brian Maginnis, another boat owner who returned his oyster strings on Sunday, said he had hung the strings in the water near his Spinnaker Bay house. Though he has been very familiar with the oyster beds at Dunster Park for the last four years, he said this was the first time he decided to participate in the restoration project.

Maginnis said he’s on the water lot, and has seen tremendous growth in the oyster beds at Dunster Park over the past few years.

“You can see so many more shells now, and the water seems a lot cleaner, too,” Maginnis said. “I’m kind of sad they’re leaving.”

The contribution Olympia oysters can make to cleaner oceans is real, Arre said. The oysters can filter 50 gallons of seawater a day, she added. The oysters also retain sediment, which helps slow erosion and makes the coast more resilient to sea level rise, according to Arre.

Healthy oyster beds also create an ecosystem that supports birds like the endangered least terns as well as other sea creatures like brittle stars and sea anemone and other organisms, according to Arre.

“We have anecdotal evidence that the California two-spot octopus is having a wonderful time harvesting from us,” Arre said.