Neighbors wanted a cleanup, but a pandemic and maze of jurisdictions made that a tall order • Long Beach Post News
- ADVERTISEMENT -

Robert Luna and his wife purchased a home in the Ridgewood neighborhood early last year. They believed they purchased the perfect home, which sits between Orange and Cherry avenues off Del Amo Boulevard, along the railroad tracks that border North Long Beach.

Luna, 32, said the neighborhood was calm—and being an outdoorsman himself—said he loved the sounds of wildlife rummaging through the bushes behind his backyard fence.

Perceptions about his neighborhood quickly changed in late December. Luna alleged that a man hopped over his backyard fence and attempted to enter his home by force. His wife was home that day, and Luna said the man told her to let her into the house so that he could use the phone. Luna’s wife was startled and called the police, but the man had already left.

“It made me feel uneasy,” Luna said. Two weeks later, an encampment of tents was established near his backyard on the railroad track, according to Luna (who has no relation to the Long Beach police chief of the same name).

Luna shared a post on Nextdoor about his experience to which neighbors replied that they too had gone through similar situations.

“That opened up a door, and other neighbors thanked me for speaking up,” Luna said. “At first, I didn’t want to say anything—every homeless person has a story, but there’s a line that you cross—where does it stop? That opened a can of worms with my neighbors.”

Online, the neighbors have alleged that individuals have hopped over their backyard fences, stolen property and started fires that have burned close to their homes since last year.

“There are security concerns and public health concerns,” said Councilman Al Austin, who represents the area. 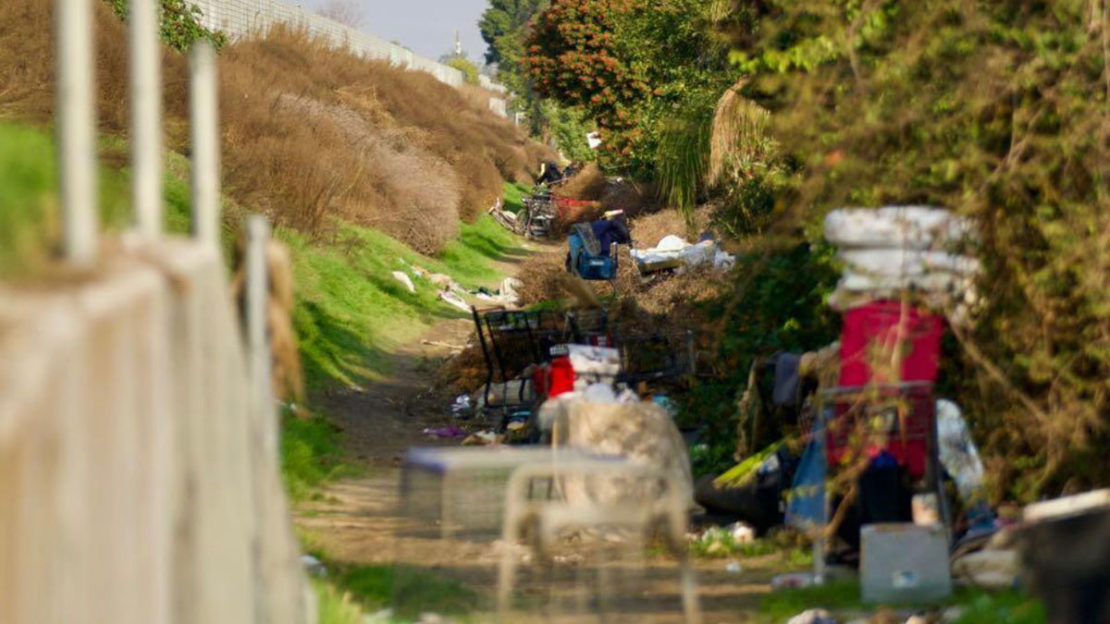 A build-up of items behind residents’ homes in the Ridgewood neighborhood. Photo courtesy Robert Luna.

Following Luna’s social media post, the Ridgewood neighborhood organized and began requesting the city to assist them with cleanups along the railroad tracks, however, they soon began to realize that jurisdiction over the tracks is complex and is divided among several agencies, including Long Beach, CalTrans and Union Pacific.

“No one wanted to take responsibility,” Luna said.

Luna said the community eventually met with Austin and Union Pacific representatives to discuss a plan to clean up the railroad. It took a multi-jurisdictional task force to meet the residents’ requests, but on Feb. 19, Union Pacific personnel conducted cleanups and homeless outreach along the railroad.

But the next month brought an even more complicated hurdle: In March the coronavirus pandemic put a stop to any further sweeps.

After the cleanups stopped, Luna said people returned, and so did some of the problems, including two separate fires that broke out, one of which got close enough to Luna’s home that it burned the brush behind his fence.

What’s more, advocates for the unhoused worry the pandemic may end up driving more people into homelessness—a problem that was already growing in Long Beach. Numbers released in June showed that homelessness increased by 7%. Housing advocates have warned that without protections, economic pain from the coronavirus may unleash a wave of tenant evictions, opening the possibility of more individuals living on the streets.

“Homelessness has become an ever-increasing issue along our right-of-way and jurisdiction across the state,” Tim McMahan, a spokesman for Union Pacific, said. “It’s a societal issue that the city, state and railroad industry have struggled to get their arms around.”

When asked why Union Pacific determined it was time to restart the cleanups, McMahan did not provide details but stated that Union Pacific “coordinated with local municipalities to determine the cleanup schedules.”

The City Council voted last week to resume some cleanup programs that were also put on pause during the pandemic.

Officials say the homeless residents displaced from the railroad tracks by the sweeps are offered services, but it’s unclear how many end up benefiting from them.

For Luna and his neighbors, the future seems bleak.

“I don’t think I’m ready to plant my roots in Long Beach because of this,” Luna said.