No matter what the city does with the Queen Mary, it won't be cheap, new report says • Long Beach Post News
- ADVERTISEMENT -

Should the Queen Mary be preserved in place or moved and dry docked? Could it be dismantled and scrapped, or turned into an artificial reef?

Those are some of the options as Long Beach weighs the longterm costs of owning a century-old steel ocean liner.

And all of the plans come with a significant price tag, ranging from $105 million to retire and scrap the ship, to roughly $500 million to move the vessel and build a new dry dock, according to a report from city-hired engineering firm Moffatt & Nichol.

Long Beach has owned the Queen Mary as a tourist attraction since 1967, but for years it has leased the ship to various operators that have struggled to make a profit.

The latest operator filed for Chapter 11 bankruptcy in January and the city this month took control of the Queen Mary when former leaseholder, Urban Commons Queensway, walked away from the lease after the ship received no qualified bidders at bankruptcy auction.

Long Beach now has complete control of the ship for the first time in more than 40 years, and with it comes tough decisions about the future of the aging vessel and how much to invest in critical repairs.

The City Council in a special meeting on Tuesday for the first time got a glimpse into the costs for several options. The city is working to determine funding sources while also considering the feasibility of transferring control of the ship to the Harbor Commission, which oversees the Port of Long Beach.

The options for the Queen Mary’s future include preserving the ship in place for a one-time cost of $25-$50 million, with ongoing costs of $5 million annually for more than 25 years. City officials said this option is costly up front, but those costs could be offset by tourism revenue.

Dry docking is the most expensive option, with costs ranging from $200-$500 million, but it’s the most longterm solution, with the ship expected to last at least another 100 years, officials said.

Another option is to “retire and recycle” the ship or turn it into an artificial reef for costs ranging from $105-$190 million, but the city would lose the chance for future revenue, officials said. 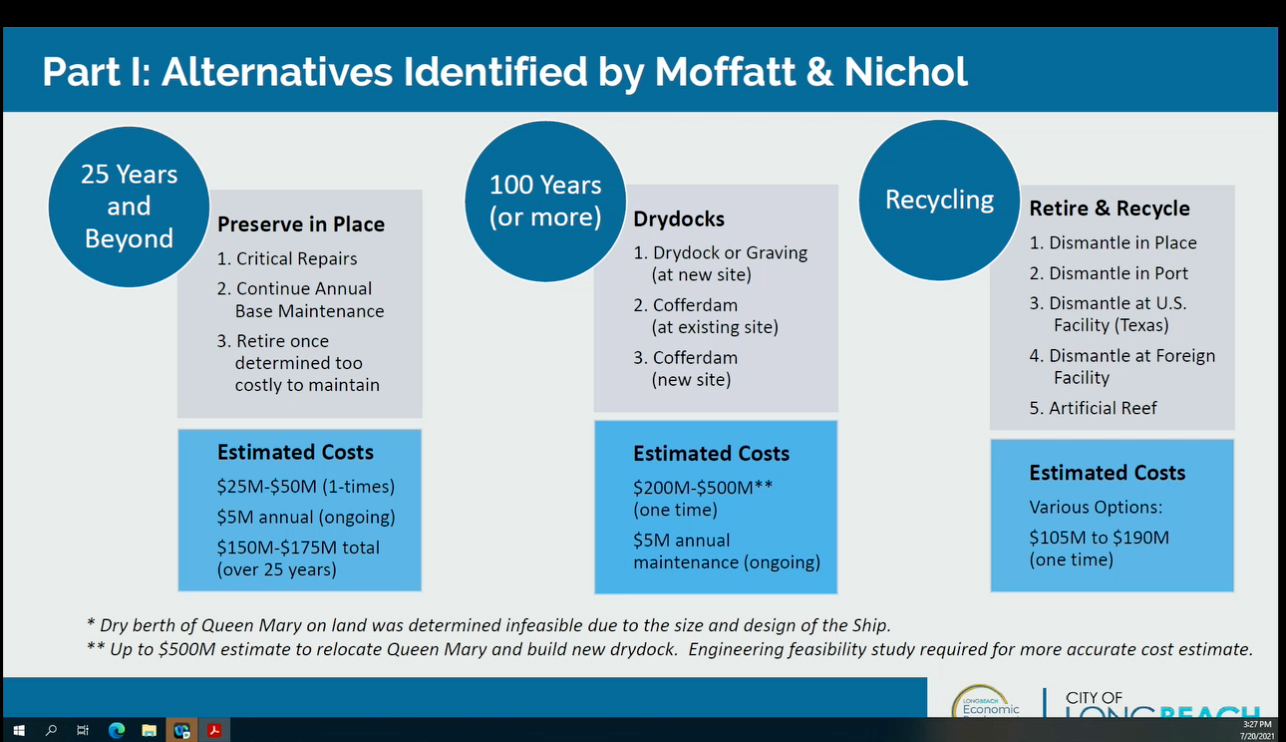 Councilman Rex Richardson said he liked the dry dock option as it provides the most potential to preserve the ship and develop the surrounding land.

“We have the opportunity to create major jobs in the community,” he said.

Councilwoman Suzie Price asked to push forward with exploring the possibility of having the Queen Mary designated as a national landmark, like the Statue of Liberty, which would provide federal funding.

Mayor Robert Garcia noted that the city still has much to consider.

“It’s an historic landmark not just for our community but for the country,” he said. “The amount of history is something to be celebrated and preserved.”

Moffatt & Nichol in the coming weeks is expected to release a detailed structural integrity report on the Queen Mary that will have more information on the ship’s condition.

In the meantime, the Queen Mary is expected to remain closed until 2022 as the city works on critical repairs.

Naval architect John Waterhouse, who was hired by Moffatt & Nichol to inspect the Queen Mary, said the ship could last another 100 years with regular maintenance, but timing is critical.

“We’ve had 30 years where the Queen Mary had in fits and starts some maintenance but she’s at what I would call a tipping point,” he said. “If there’s no attention paid to the ship, she will go downhill in the not too distant future.”