Family members say 42-year-old Jose Palacios was sleeping inside his North Long Beach studio apartment on what seemed like a regular Tuesday night, ready to work the next morning to provide for his wife and two children. That all changed when a speeding driver crashed his pickup truck into Palacios’ home, killing him and his 3-year-old daughter Samantha.

Since then, the North Long Beach community in the Hamilton neighborhood has rallied to support Palacios’ wife Esnelia and their son Salvador, including protesting against the bar police say the pickup truck driver, Octavio Montano Islas, was seen leaving last week before he crashed into the family’s apartment at high speed. Islas allegedly fled the scene and police have since issued a warrant for his arrest.

On Saturday afternoon, more than 75 people gathered at the 6600 block of Rose Avenue to make a statement against Bottoms Up Tavern, which lies less than 250 feet from the Palacios home. A vigil remembering Samantha and Jose now lays where the pickup truck crashed through—the hole in the wall from the impact is still covered with plywood. 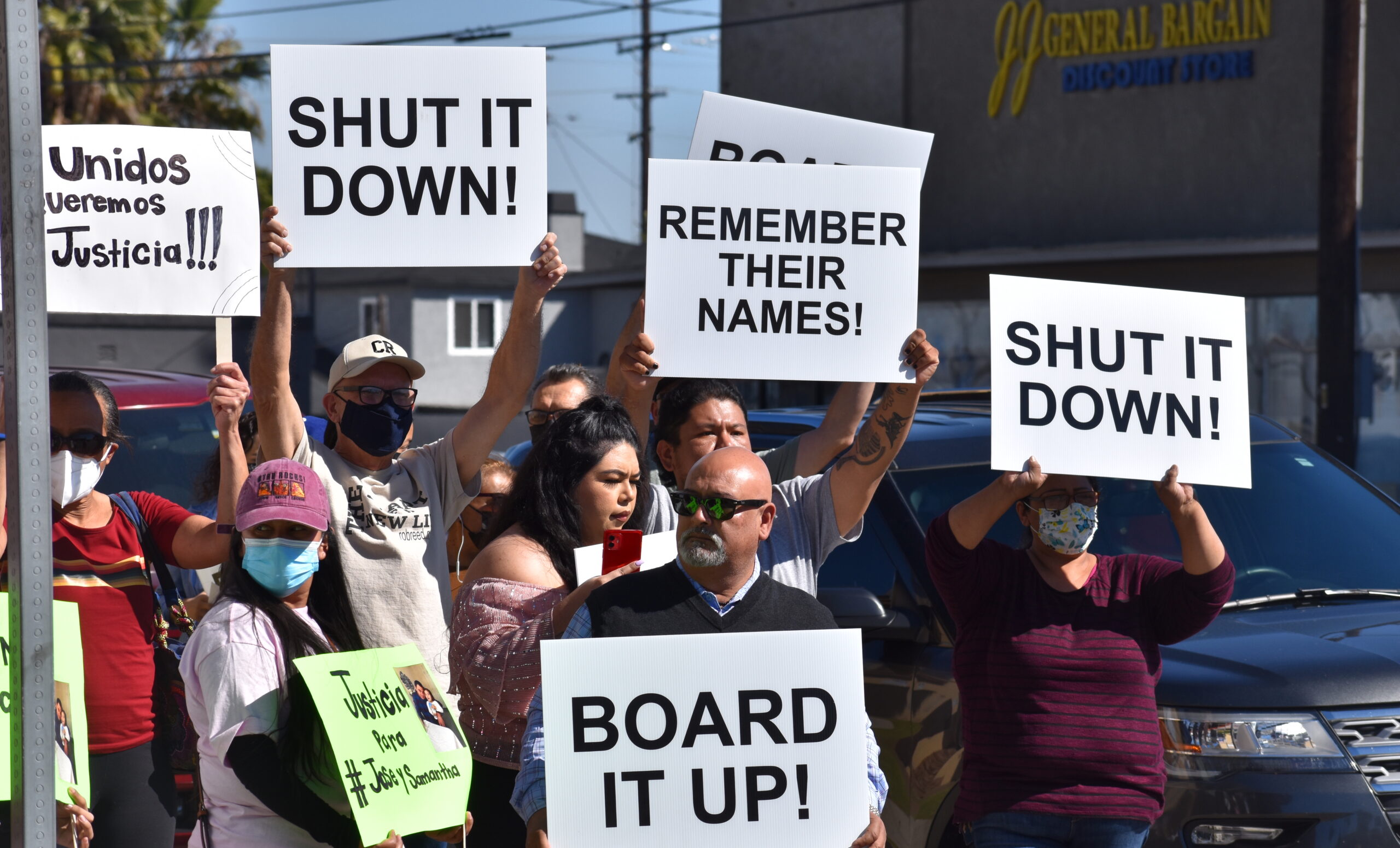 Esnelia Palacios’ family members hold up signs in the Hamilton neighborhood on Saturday, March 12, calling for the closure of Bottoms Up Tavern, the bar police say Octavio Islas was last seen before he crashed his truck, killing two. Photo by Fernando Haro.

During the rally, people held signs reading “Board it up,” “Remember their names” and “We want justice.”

Renette Mazza, president of the Hamilton Neighborhood Association and organizer of the event, said the goal of the rally was to emphasize to the city that they no longer want the bar in their community, calling it a “menace” to the area.

“We are done with death and destruction in our neighborhood,” Mazza said.

Among those present was Assemblymember Mike Gipson, who said he will be going back to Sacramento to ensure that the state Department of Alcoholic Beverage Control launches an investigation aimed at removing Bottoms Up Tavern’s business licenses. Prior to the rally, the ABC launched an investigation to find out what occurred the night of March 1.

Gipson told the crowd he lost a son to a hit-and-run driver.

“We remember him every birthday, every Christmas, every holiday, there’s a seat missing at the table,” said Gipson. “There has to be some accountability. This guy was drunk.”

“No, he wasn’t,” one Bottoms Up Tavern patron said in response from across the street.

The crowd chants “shut it down,” referring to the bar across the street. People here say they just want justice for the victims of the crash, blaming the bar for the “destruction” in their neighborhood. pic.twitter.com/ALdWzfC0LR

Bar owner Suzanne Blevins said in a previous statement that footage she showed police that night didn’t show Islas at her bar at all. But she later discovered footage from a different angle that shows Islas leaving the bar, getting into his truck on Artesia Boulevard and then making a flailing left turn onto Rose Avenue before crashing into the Palacios home at high speeds. Blevins was not immediately available for comment.

Following the crash, police said Islas fled the scene on foot. Police have since issued a warrant for his arrest.

Councilmember and mayoral candidate Rex Richardson, who called for local and state agencies to scrutinize the bar following the crash, reaffirmed his stance at the rally saying the community will make sure everyone responsible is held accountable.

“This tragedy shook all of us,” Richardson said. “It was incredibly heartbreaking and no community should have to deal with this.”

During the next City Council meeting Tuesday, Richardson said he and other city council members will ask that the city partner with Los Angeles County to establish a $25,000 reward for information leading to Islas’ arrest. 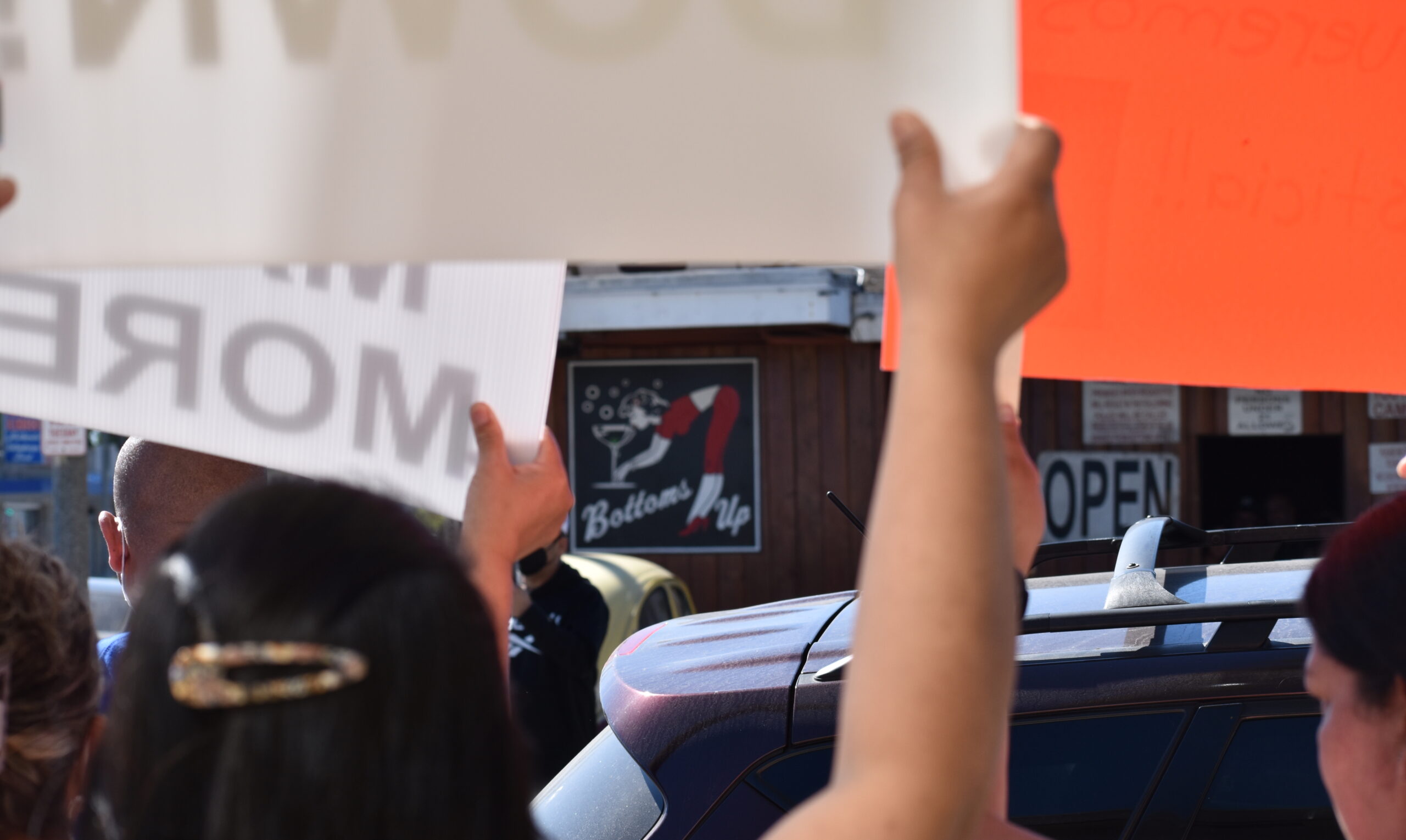 More than 75 people showed up to rally against Bottoms Up Tavern in the Hamilton neighborhood on Saturday, March 12. Photo by Fernando Haro.

Arrest warrant issued for man suspected of crashing into apartment, killing 3-year-old and her father