Long Beach doesn’t typically have a strong reputation as being horse country. Aquatics? Rap musicians? Diverse restaurants? Yes to all that, but neigh to horses.

It wasn’t always that way, obviously, because before cars there were horses everywhere in Long Beach. In people’s yards, on the beach, tied up in front of saloons, stored in stables Downtown.

The opening of a new stable in the early 1900s, when there were few ways to find amusement in town, was cause for a celebration. When George Humphreys moved his Star Livery Stable from 125 E. First St. to more spacious digs at Second Street and American Avenue in 1905, he threw a “watermelon social” in which fellas were required to bring their girlfriend and a watermelon. Then everyone eats watermelon. 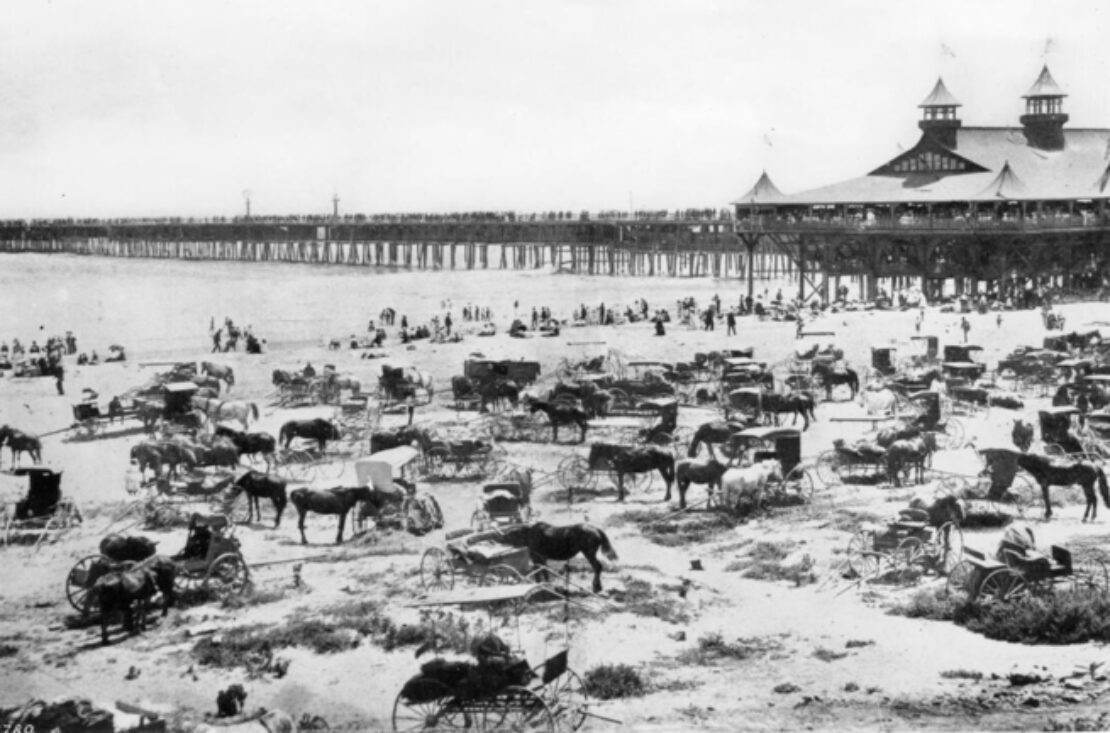 The beach at Long Beach crowded with dozens of unhitched horses and carriages as their owners sunbathe and frolic on the beach. The Long Beach pier juts out into the water in the background. Photo courtesy California Historical Society.

In slightly more modern times (late 1950s modern), I even recall the odd horseback rider cantering up Atlantic Avenue in Bixby Knolls, or trotting through my neighborhood on Keever Avenue in Bixby Terrace. It wasn’t weird, but it was rare enough that people would at least say, “Look. A horse.”

Now you’ve gotta go looking around if you want to see a horse in Long Beach. And the place to look would be way up in North Long Beach and even into Compton (home of the Compton Cowboys), where horses are still OK and if you venture up north along the LA Riverbed, you can still see some urban equine action.

And, if you have about a million and a half dollars and a true fondness for ponies, I’ve got just the place for you today. 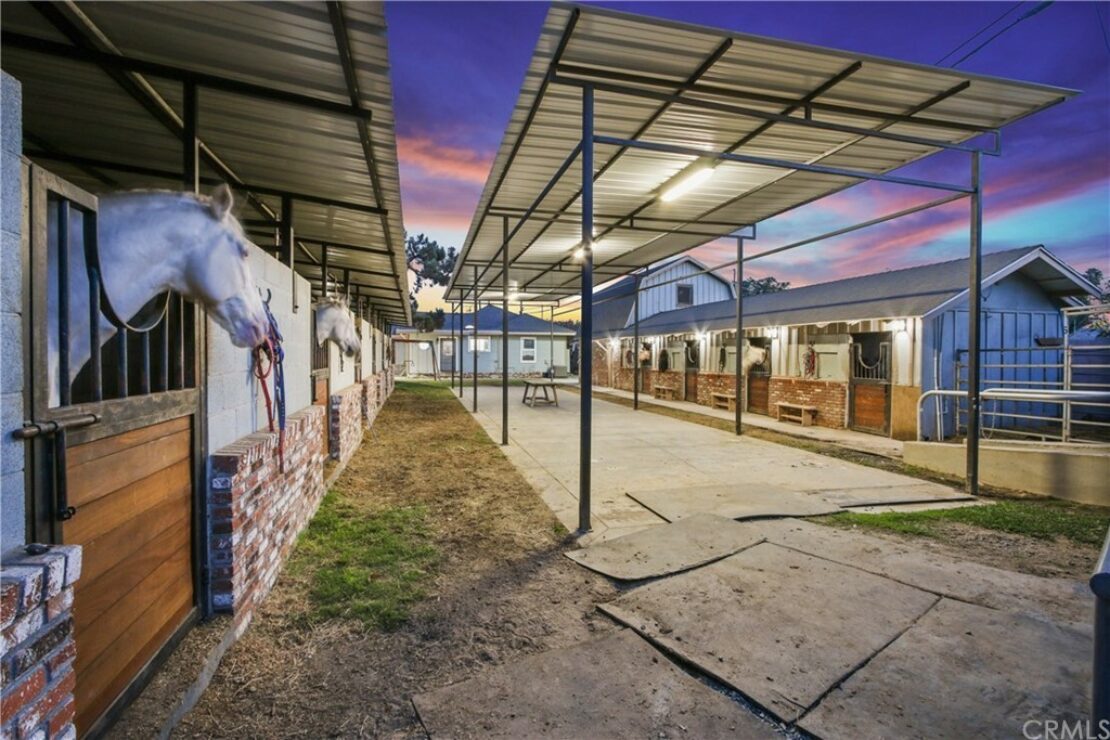 Horses in their stables at the North Long Beach home. Listing photo.

Listed by Realtor Jesse Colon of Colon Realty at a bit under $1.5 million, the horse house isn’t so much a house as a hacienda. If we can put aside the house itself for a moment and stick to horses, this nearly half-acre property has 10 large horse stables, six of which have been redone and modernized, a huge storage shed with a bathroom and room for food storage, and an arena for working out your horses (that is, if you plan on having horses, which would be the assumption, though Colon said he’s had a cash offer from some monks who want to use the property as a place to congregate and pray). The spread is so big you can see it from outer space—or at least from a high-flying drone. 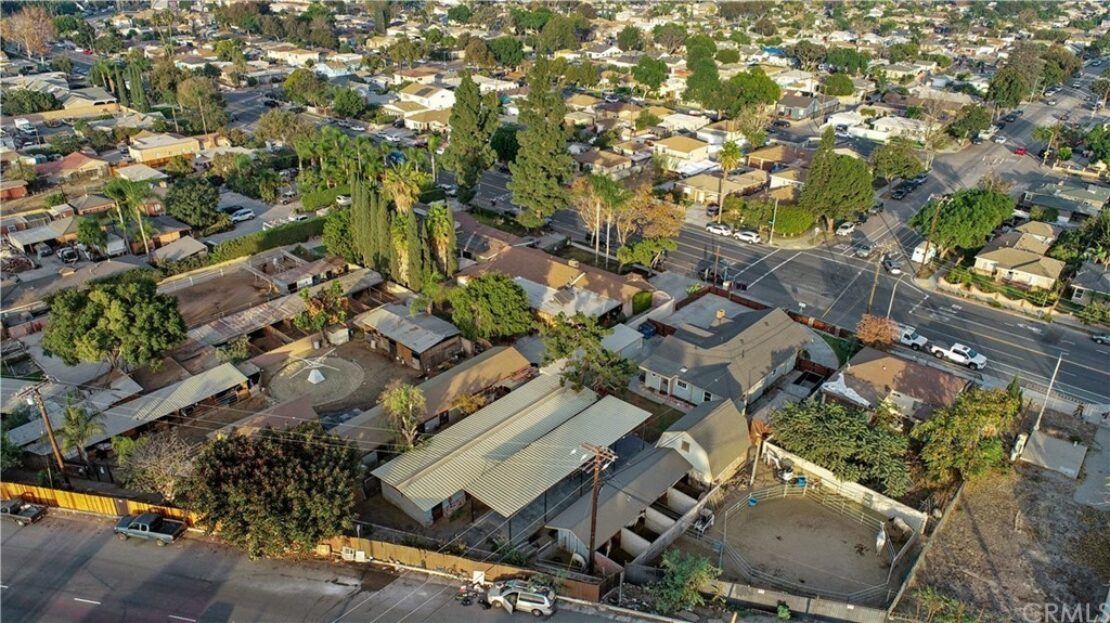 Drone photo of the property, including stables and arena at lower right. Listing photo.

The house and stables are at 6995 N. Atlantic Place, a road that splits off from Atlantic Avenue at about 69th Street and goes straight north while the avenue veers off to the west, crosses the river and winds its way up to the city of Paramount, never to be seen again.

The main house is spacious and appropriately Western Rustic. A handsome new gated entry leads to a large and new driveway. There’s a companionable front porch with wagon-wheel benches and the house has a new Presidential Series roof.

Much of the home has been renovated with remodeled bathrooms, new electric including an upgraded 200 amp panel. There’s a new upgraded kitchen with quartz counters and cabinets, new hardwood flooring and block walls. Windows? They’ve been upgraded, too. 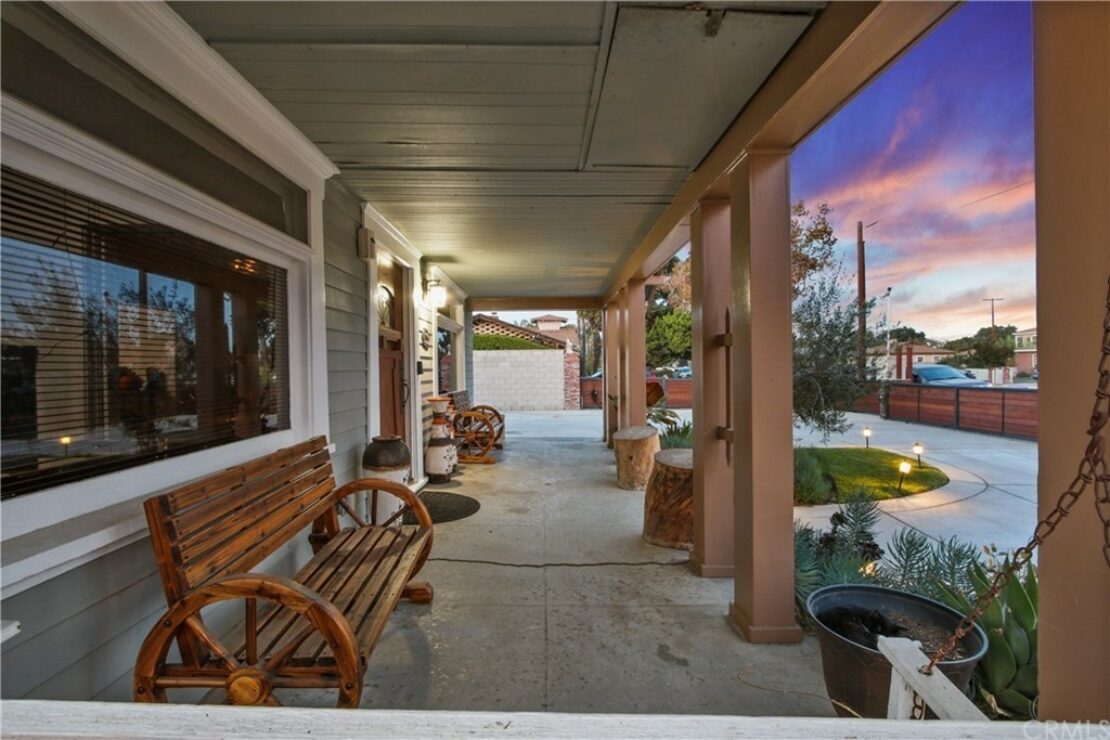 There are other equestrian properties on the west side of Atlantic Place. If you’re intent on spending upward of a million dollars for a house in North Long Beach, this is where you’ll manage to do it easiest. The homes on the east side of the street are your more traditional Northtown homes, mostly valued close to the $626,000 median home price in the 90805 ZIP code.

So, the horse house is a rare NLB million-dollar property, but it’s certainly not for everyone—not even for every millionaire. But if you enjoy living in what feels like rural America you might enjoy this place, as long as you like horses. You’ve gotta like horses.