Ramona Park has been identified as a potential location for a new public swimming pool in North Long Beach, but first, the city must find roughly $10 million it would cost to build, according to a city report.

The city considered three North Long Beach parks for the new pool—Houghton, Scherer and Ramona—but ultimately found that 7-acre Ramona Park, near the city’s border with Bellflower, had the fewest obstacles and would serve more residents who lack access to a pool.

The city could get a more firm cost estimate from a consultant, but Parks, Recreation, and Marine Director Brent Dennis said in a memo that the price tag to build the pool could range from $6.5 million to $10 million.

It would likely be an outdoor pool, which would cut down on construction and operating costs, but would still require areas for staff and for storing chemicals and mechanical equipment in addition to a locker room, restrooms and showers. The project being proposed is a 25-yard recreational pool. The city could conduct a visioning plan to gauge the community’s interest in a pool before moving forward.

North Long Beach residents have seasonal access to the pool at Jordan High School and a number of other private pools that require monthly fees to use, but the closest city-owned swimming facility is at Silverado Park in West Long Beach. Open swim fees at Silverado Park range from $1 to $3.

Councilmember Rex Richardson in August asked the city to look into what it would cost to build a facility in North Long Beach, saying that it was an equity issue for residents who have to travel across the city to escape the heat, something that could get worse as climate change accelerates. 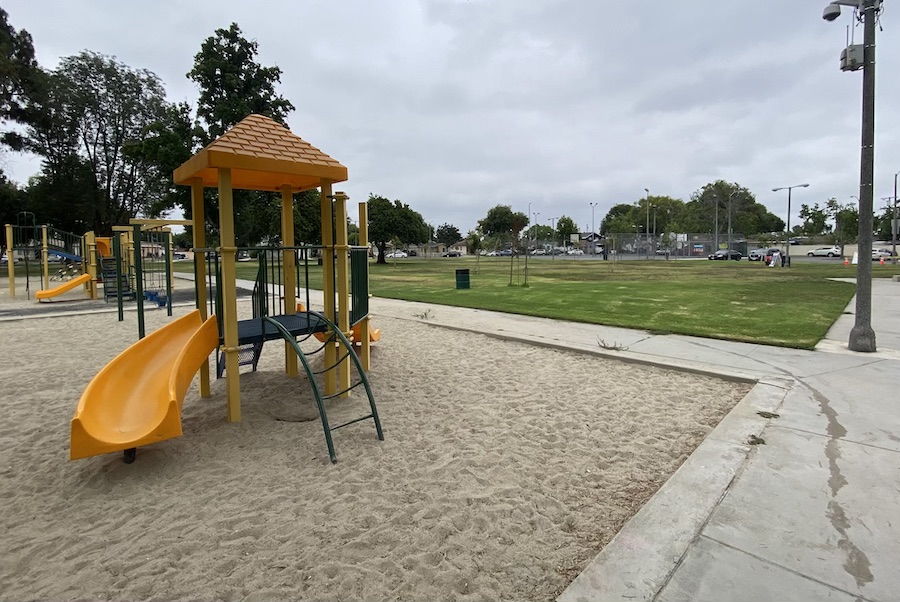 The space between Ramona Park’s existing playground and sports courts was identified as a potential location for a new pool if the city can secure funding. Photo by Jason Ruiz.

This isn’t the only pool project underway. Long Beach is nearing final approval from the California Coastal Commission to build a new complex at the former Belmont Plaza Olympic Pool in Belmont Shore that was demolished in 2014. The new complex is expected to cost in excess of $85 million and will be primarily paid for with revenue from the Tidelands fund that is restricted for investments along the coast.

For the North Long Beach pool project, city officials looked at several parks in the preliminary study for a closer facility, but some were ruled out for being too small (Coolidge and Jackson), having mitigation issues from being built atop a former landfill (Davenport) and being the location of previously approved community plans.

Dennis said that Houghton Park, the area’s largest park, was ruled out because a pool was not included in an already completed community vision plan that identified updated sports fields as a priority. The annual Uptown Jazz Festival and the park’s proximity to Jordan, where residents can swim during the summer, were also factored into the decision to rule it out.

Scherer Park’s topography, an existing sewer main that would have to be moved and the more affluent demographics that surround the park led to Ramona being suggested as a more suitable location.

“From an equity standpoint, there are residents in other parts of North Long Beach that may gain the greatest benefit due to the traditional lack of resources in their communities,” Dennis, the parks director, said in the report.

Funding the pool could come from a number of sources like the city’s Measure A sales tax, which generates tens of millions in annual revenue that the city uses to staff public safety departments and address infrastructure. State, federal and local taxes and grants were also listed as potential funding sources for the pool.

The City Council is expected to start its budget discussions in the coming weeks.

If the pool does get built, Dennis said in the memo that funding the pool’s programming and maintenance would be a challenge for his department, which already struggles to take care of existing municipal pools. Those pools are in “dire need of repairs” and have limited hours of operation due to existing budget constraints.

North Long Beach lacks a recreational swimming pool, but that may change