After weeks of low case rates, local nursing homes are once again seeing an increase in COVID-19 outbreaks as the county on Thursday reported a record number of total cases.

As of Thursday, Los Angeles County reported more than 5,000 new coronavirus cases, the highest level reported since the pandemic began this year.

The alarming surge has prompted county officials to warn of possible strict stay-at-home order as early as Sunday, and on Thursday, the state issued a limited curfew for nonessential activities.

Nursing homes, which have been an epicenter for the virus, accounted for the largest number of cases early in the pandemic. But over the last several weeks, case numbers in Long Beach nursing homes have dropped significantly as it appeared that virus had worked its way through many of the city’s long-term care facilities.

For weeks in October and early November, just one facility had a reported outbreak, down from dozens that had outbreaks earlier this year.

But the numbers are once again increasing. As of Tuesday, four facilities now had reported outbreaks for a total of 45 staff and 28 residents currently infected. 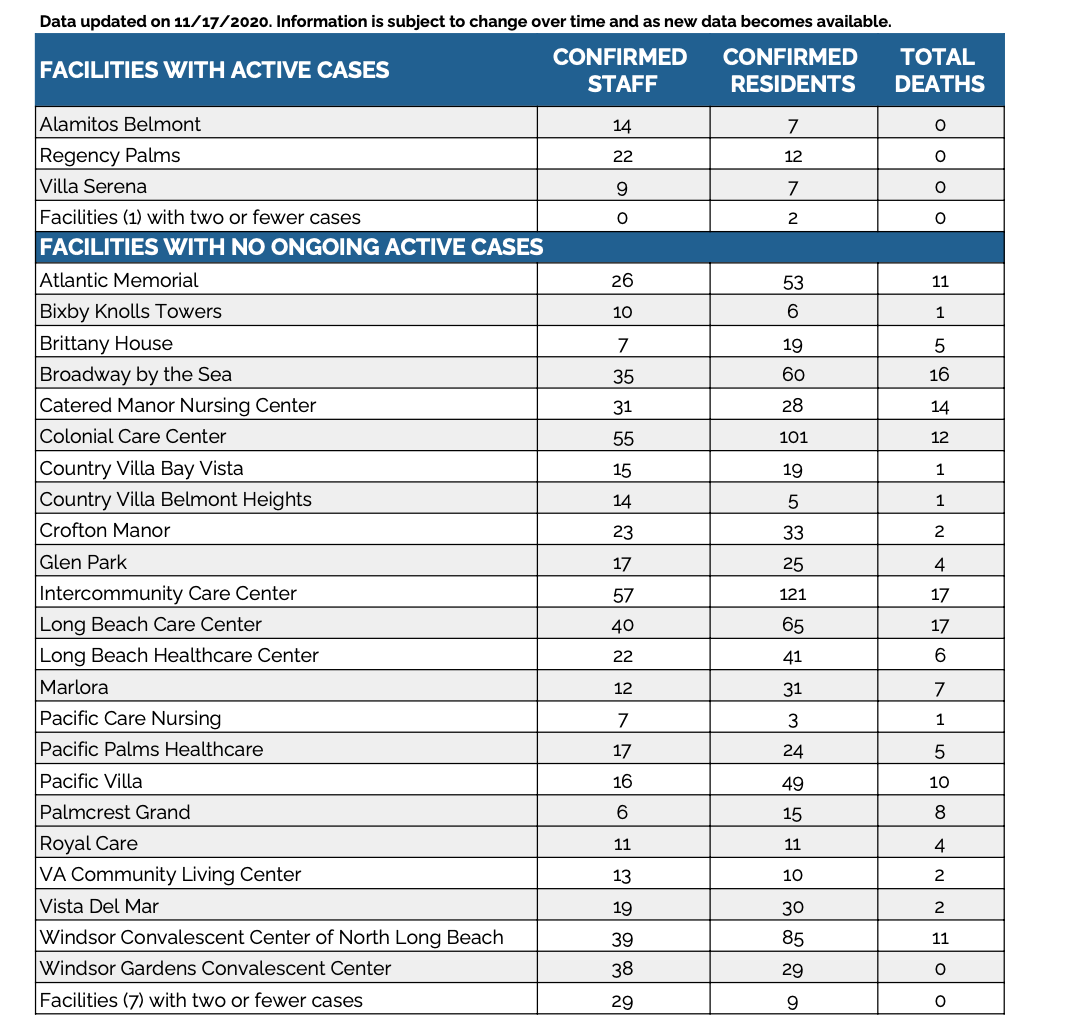 As the virus is now infecting younger people at a higher rate than when the pandemic began, officials have warned against holiday gatherings that could spread COVID-19 to more vulnerable populations.

Long Beach this week issued holiday guidance for long-term care facilities that includes increased testing for staff and residents, two-week quarantine of all incoming residents (including those who have left the facility to gather for the holiday), and limitations on some activities, said Chelsey Finegan, a spokesperson for the city.

“As we have been seeing increases in community spread, we also expect to see similar increases in cases at long-term care facilities,” Finegan wrote in an email. “We continue to work closely with (long-term care facilities) in Long Beach to reduce the spread, and prevent additional hospitalizations and deaths among our most vulnerable populations.”

As of Thursday, 157 of the city’s total 269 deaths from COVID-19 have been connected to the city’s long-term care facilities.