A promised light rail connection between Downtown Los Angeles and Artesia is in danger of falling decades behind its expected opening date, alarming officials who say it would be a broken promise to residents in the underserved communities that would use the line.

The West Santa Ana Branch Transit Corridor is a proposed 19-mile LA Metro line that was supposed to run from Artesia through cities like Bellflower, South Gate and Huntington Park before ending at Union Station. The line would provide a “one-seat ride” for residents of one of the most underserved regions of the county to Downtown.

The line was one of Los Angeles Mayor Eric Garcetti’s “28 by 28” projects that were supposed to be completed in time for the 2028 Olympics, but now Metro staff is saying it could take until 2053 for the line to be completed. Funding from countywide sales-tax increases approved by voters was supposed to help fund the project.

LA County Supervisor Janice Hahn, who also serves on the Metro Board of Directors, said the staff report given to the board in December was the most disappointing she’s read as a member of the board.

“I’m going to be in the West Santa Ana Branch in the sky by 2053,” Hahn said. “I don’t think any board member will still be alive in 2053. This is unacceptable, disappointing and whatever working group is working on this, you’re not doing it and not delivering it.”

Hahn followed up with a letter to Metro’s chief executive officer asking that a report on the project this month include answers about why the timeline has been dramatically pushed back and what can be done to speed it up. 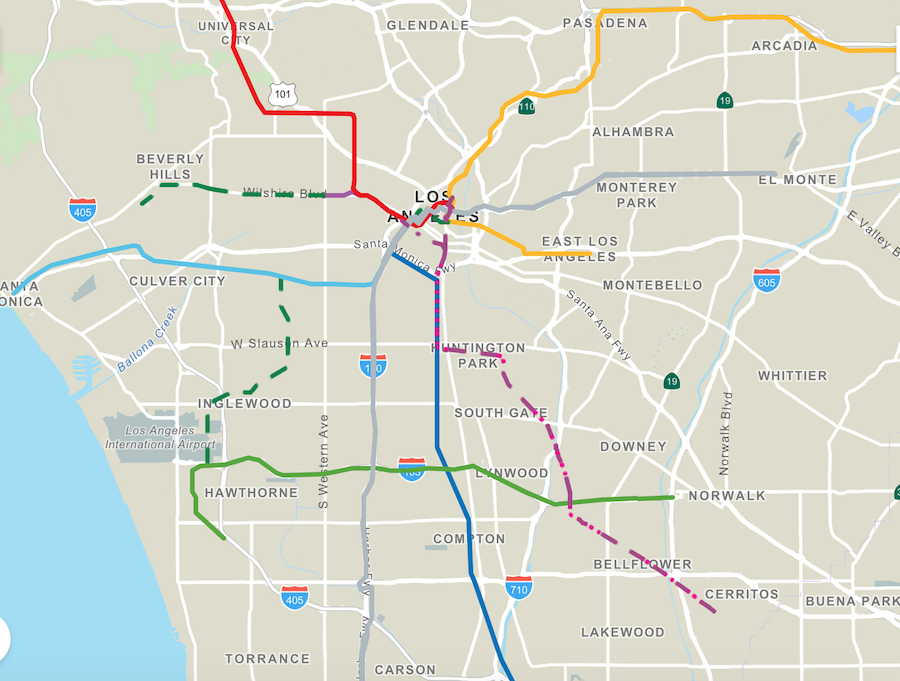 A screenshot of the West Santa Ana Branch line (purple) that would connect Artesia to Downtown Los Angeles.

Metro noted that rising costs have set the project back. In 2015 dollars, it projected that building the Santa Ana Branch to connect with the C Line (Green) would have cost $1 billion, and connecting that section to Downtown would cost another $3 billion. A projection for the cost to connect Artesia to Union Station is now over $8.5 billion, according to Metro.

Metro staff is proposing a shorter version of the project that would end at the Slauson Station where riders of the Santa Ana Branch would have to transfer onto the A Line (Blue) to continue to Union Station.

That version would be cheaper ($4.9 billion) but could create a slow-down of service for A Line riders. Members of the public expressed anger at the proposal because the community was promised a line that went from Artesia to Union Station, not to the Slauson Station.

“If it ends at Slauson it would be a repeat of the Green Line ending before it reaches LAX,” Estela Lopez, executive director of the Downtown Industrial District Business Improvement District, said last month. “It would be a dream deferred.”

Hahn and Board Member Fernando Dutra asked that staff explore all options to speed construction. That could include pursuing additional state and federal funding, which Metro staff said it already is, or looking at postponing other projects.

James De La Loza, chief planning officer for Metro, said that the line is likely not going to be completed by the 2028 goal date originally outlined by Garcetti. De La Loza said last month that even if Metro had the $8.5 billion to build the project now, it would take about 10 years to complete it.

De La Loza noted it’s a very complex project that would include widening the 105 Freeway. All versions of the line would include a mix of crossings that would be above and below the street surface as well as crossing over multiple freeways.

In addition to local tax measures, Metro is looking at the potential of levying additional taxes and or financing debt based on the new assessed value of the surrounding properties adjacent to the West Santa Ana Branch line that could produce billions for the project. However, that’s considered a less certain form of funding.

Metro said it has made attempts to secure private funding for a public-private partnership solution to the current funding gap. If Metro is able to bring on private investors, the timeline could be shortened, according to Metro staff.

The next regular meeting of the board of directors is scheduled for Jan. 27 at 10 a.m. The board is expected to choose a terminus for the new line and one of the four alternatives outlined in Metro documents.

However, Hahn is expected to present an update to the Eco-Rapid Transit Board of Directors on Wednesday. The joint-powers authority was formed to create a transit option for southeast Los Angeles County and has representatives from many of the cities that the West Santa Ana Branch would service.