A breached pipeline spilled at least 126,000 gallons of oil into the water off the Orange County coast forcing the closure of a broad swath of the shoreline and sending officials scrambling to try to limit damage from what the mayor of Huntington Beach called a “potential ecologic disaster.”

Skimming equipment and 2,000 feet of protective booms were deployed to try to stop the oil from reaching the sensitive Bolsa Chica Ecological Reserve and Huntington Beach Wetlands, city officials said. But in some areas, “softball-size clumps” of oil were accumulating on the sand, Orange County Supervisor Katrina Foley said.

“There’s oil deposits all along the shore,” Huntington Beach Mayor Kim Carr said. The spill was already affecting the Talbert Marshlands and the Santa Ana River Trail, according to Carr, and the sheen on the water shows much more is likely headed toward the beach. 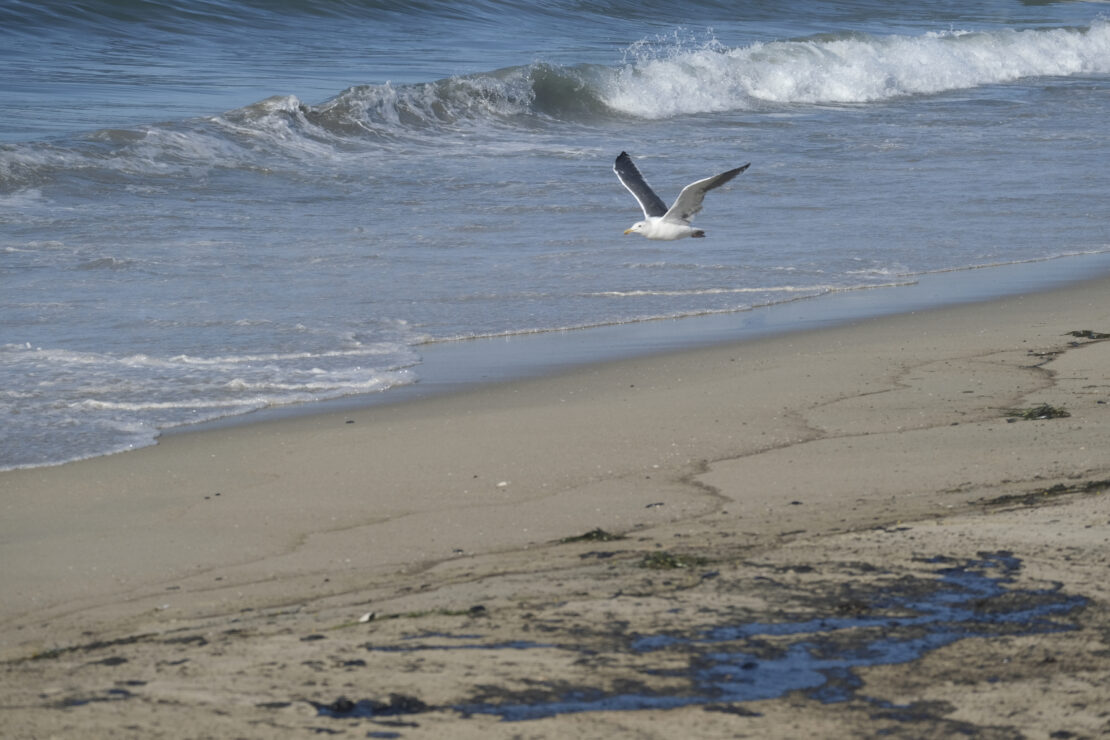 Initial reports about the spill said about 3,000 barrels worth of oil had leaked by around 9 a.m. Saturday and covered about 5.8 nautical miles between the Huntington Beach Pier and Newport Beach. That would be one of the largest oil spills in recent Southern California history, and that amount may not be the final tally.

It appears the leak happened around 4.5 miles from shore in a pipeline that connects to the oil Platform Elly off of Long Beach.

It’s not clear when or how the leak started, but workers noticed the oil on the water Saturday morning and notified the coast guard before shutting down the pipeline, according to Martyn Willsher, CEO of Amplify Energy, which owns the platform.

Divers on Sunday were inspecting the 17.5 miles of pipe, which runs along the ocean floor about 80 to 90 feet deep, according to Willsher.

The pipe carries heavy crude and it has been suctioned at both ends to try to prevent any more from leaking out of the line, which has a total capacity of 150,000 gallons, Willsher said at a news conference Sunday afternoon. 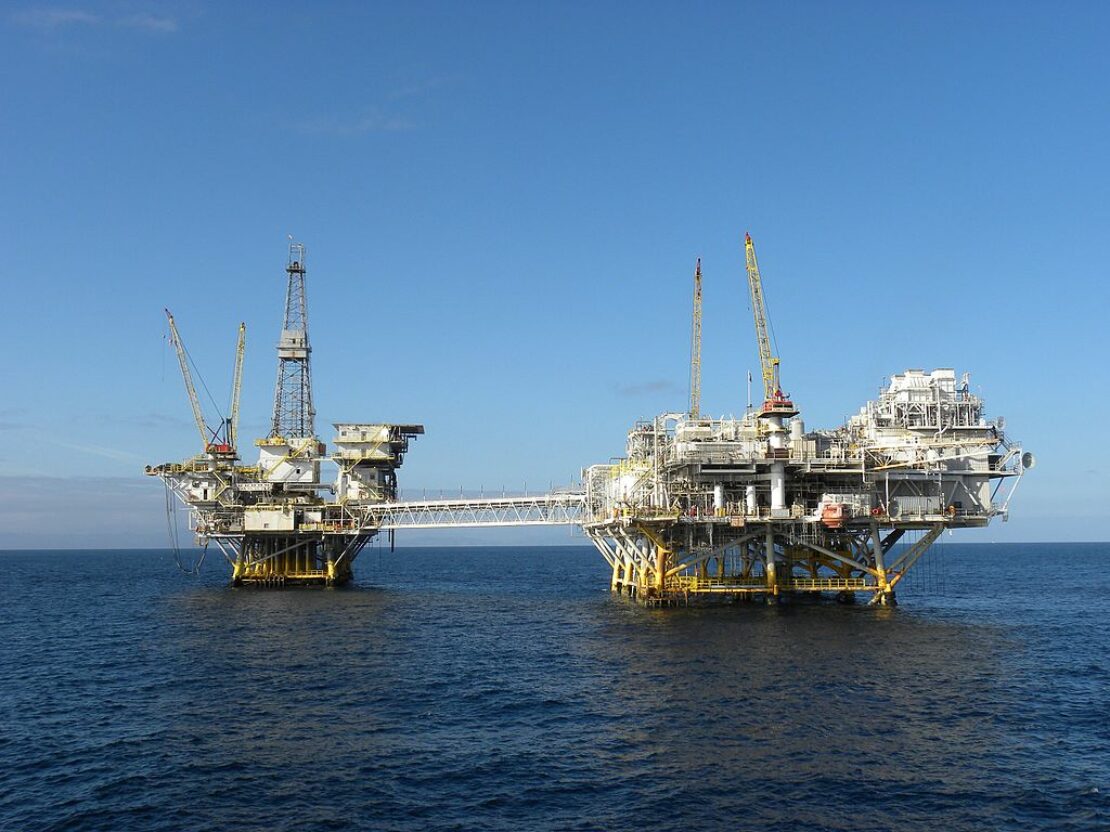 Platforms Ellen and Elly offshore near Long Beach. Ellen (right) is a production platform connected by a walkway to Platform Elly (left), a processing platform for both Ellen and another platform, Eureka. They’re shown here in an Oct. 22, 2012 photo. Courtesy the Bureau of Safety and Environmental Enforcement.

Meanwhile, dead birds and fish have already started washing ashore, according to Foley.

Any marine mammal or bird that comes into contact with the oil will be in peril, said Peter Kareiva, president and CEO of the Aquarium of the Pacific in Long Beach.

“When feathers or fur are oiled, they no longer function and animals often die from hypothermia,” he said. “Oil, especially lighter oil, is also directly toxic to many organisms and can contaminate shellfish and fish.”

The spill drew a response from all levels of government and a unified command was established in Long Beach to handle the environmental crisis, officials said.

Beaches in Long Beach, however, remained open. The city hasn’t seen any oil come ashore and doesn’t expect to unless currents change, according to a statement, which said that “there is no water quality threat in Long Beach at this time.”

“Should that change, the City of Long Beach is prepared to clear beaches immediately, start our own mitigation efforts and provide further updates,” the statement said.

Significant ecological impacts in HB.
o   Oil has washed up now onto the HB beachfront.
·     We’ve started to find dead birds & fish washing up on the shore.

o   @Calwild has a hotline for wildlife impacted from the oil.  Oiled Wildlife Care Network at (877) 823-6926. pic.twitter.com/rtgExxTXZj

“It is imperative that the federal government assist in recovery efforts. Constituents who live along the shoreline are already reporting oil on the beach and strong odors,” Steel wrote.

The California Department of Fish & Wildlife has also set up the Oiled Wildlife Care Network hotline, at 877-823-6926, for people to call if they see wildlife impacted from the oil, but they were urged not to approach the wildlife.

Health officials in Orange County warned people not to swim, surf or exercise by the beach because of the potential health hazards, including toxic fumes, which also threaten marine life and other wildlife.

The city of Huntington Beach also canceled the second day of the Pacific Airshow Sunday to facilitate cleanup and reduce health impacts.

“The City fully acknowledges the gravity of the decision to cancel the final day of the iconic Pacific Airshow, and the disappointment that this decision will cause,” the city said in a statement. “However, the need for prompt and intensive intervention efforts requires complete and unfettered access to the marine environment.”

The unified command said the public was being asked to avoid any oiled areas. Trained spill response contractors were cleaning up the disaster.

“Public volunteers are not needed and could hinder response efforts. We request that members of the public stay away from the area,” officials from the unified command said in a statement.

“The U.S. Coast Guard is the lead agency, coordinating the response to the oil spill and investigating how it occurred,” according to the city of Huntington Beach.

Beta Offshore is the Southern California oil producer that operates the Elly oil platform. It is a unit of Amplify Energy, which is based in Houston, the Washington Post reported.

Installed in 1980 with operations beginning in 1981, Platform Elly is secured to the seafloor in waters approximately 265 feet deep. The platform is nearly 12 miles due south of Long Beach’s Belmont Pier and is part of a double platform called Ellen and Elly, with a 200-foot long bridge connecting both together. 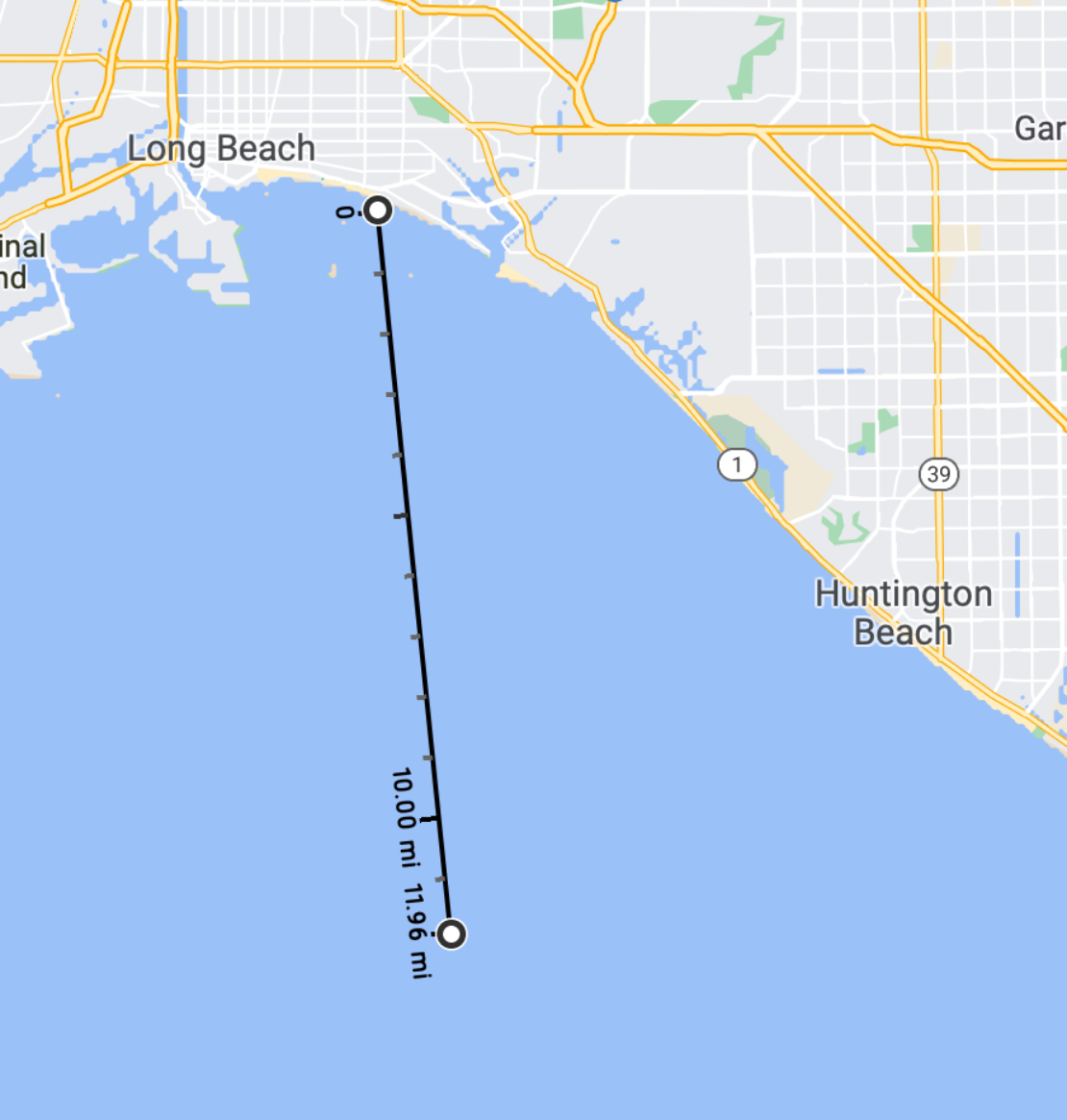 A map shows the location of Platform Elly, about 12 miles due south of Long Beach’s Belmont Pier.

Orange County Supervisor Foley—who represents the impacted cities of Newport Beach, Huntington Beach and Seal Beach—said the damage from the spill could be irreversible.

She said the beaches and marshlands are “part of our heritage” and draw countless numbers of people to the shore.

Huntington Beach has seen similar disasters before. In 1990, an estimated 3,400 birds were killed when the American Trader oil tanker ran over its anchor and punctured its hull on February 7, 1990, spilling an estimated 416,600 gallons of crude oil off the coast of the city, according to the California Department of Fish and Wildlife website.

“The coastal areas off of Southern California are just really rich for wildlife, a key biodiversity hot spot,” said Miyoko Sakashita, director of the Center for Biological Diversity’s oceans program.

The effects of an oil spill are wide-ranging, environmentalists said. Birds that get oil on their feathers can’t fly, can’t clean themselves and can’t monitor their own temperatures, Sakashita said. Whales, dolphins and other sea creatures can have trouble breathing or die after swimming through oil or breathing in toxic fumes, she said.

“The oil spill just shows how dirty and dangerous oil drilling is and oil that gets into the water. It’s impossible to clean it up so it ends up washing up on our beaches and people come into contact with it and wildlife comes in contact with it,” she said. “It has long-lasting effects on the breeding and reproduction of animals. It’s really sad to see this broad swatch oiled.”

Government officials on Sunday afternoon weren’t able to provide any estimate for how long it may take to clean up the oil that spilled this weekend.

Kareiva, the aquarium president, said the leak “is a reminder that we should never take our beaches, wetlands, and beautiful coast for granted. Plastics, sewage, oil, and toxic algal blooms have all become frequent beach visitors of the worst kind. We can and must do a better job to protect them.”