This massive Tudor-Craftsman hybrid mansion has stood in Bluff Heights since the early days of the 1900s, when it was the largest structure around, standing fairly alone in the developing Alamitos Beach Townsite at Eliot Street (now Third Street) and Ojai Avenue (now Orizaba).

It was designed in the Tudor Revival style by LA architect Arthur B. Benton for his sister Olive and her husband Charles E. Espey, a wealthy landowner and developer. And right off the bat the home has historical significance, because Benton was a highly praised architect who was born in Peoria, Illinois, in 1858 and moved to Los Angeles, where he lived and worked until his death at 69 in 1927. Much of Benton’s work has been destroyed in the intervening years—including the old Long Beach Downtown YMCA and an early, nautically-themed Ebell clubhouse that was built on the beach at the foot of Daisy Avenue in 1905—but some of his more famous achievements still stand, including the Mission Inn in Riverside. He also did restoration work on many California missions, including San Juan Capistrano and San Diego. 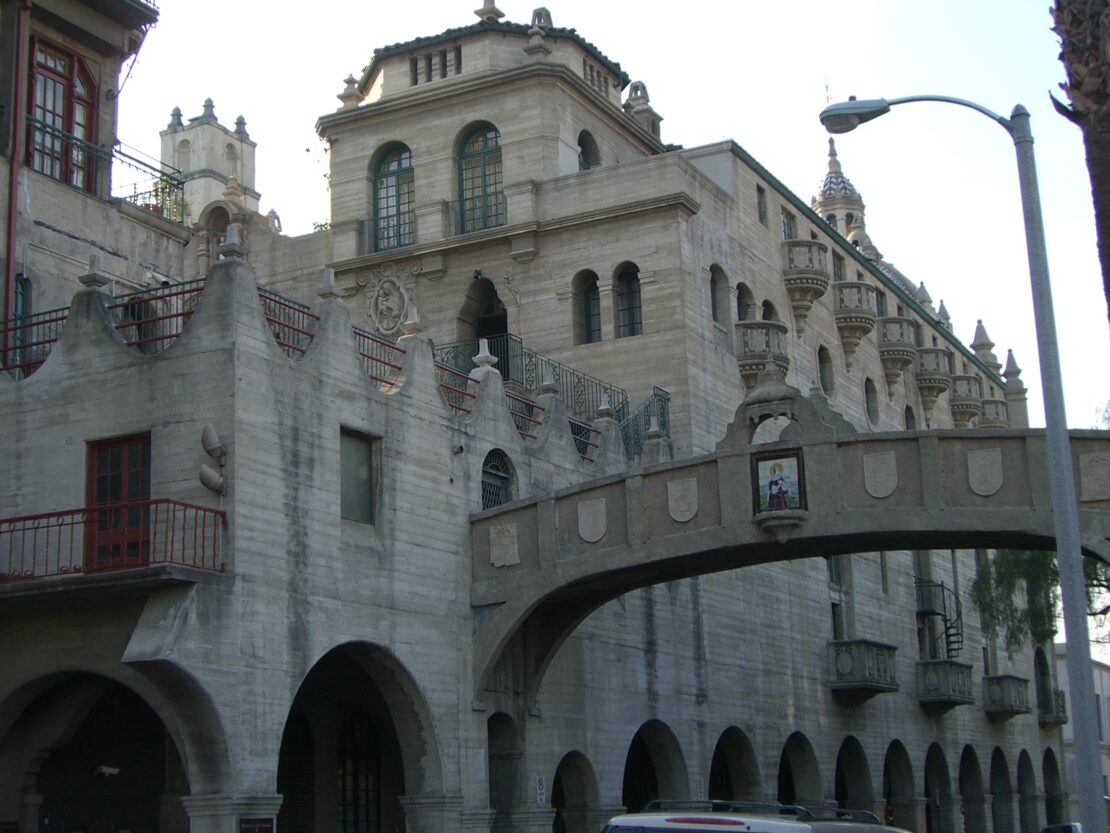 The arrests were soft-pedaled in the Long Beach newspapers, but the LA Times almost gleefully reported the affair in detail.

Espey, for his part, was eventually found not guilty, but the reportage in the Times was plenty enough to doom his standing in the community. Espey sued the Times for libel, but lost the case and he disappeared from the scene rather rapidly. At any rate, he lived a long life, dying in 1957 at the age of 87. He is buried in the Long Beach Municipal Cemetery.

The home has, over the past 120 years, been fiddled with quite a bit. For many years it was configured as a duplex with just one bathroom on each floor.

Another wealthy developer and real estate salesman, W. Patton Wilson, bought the house in 1918 and made several changes by hiring the prominent Long Beach architect Harvey Lochridge, whose major works include the five-story Markwell Building on Ocean Boulevard and Pine Avenue in 1919 and the addition of three more stories to the building after oilman A.T. Jergins bought it and renamed it the Jergins Trust Building in 1929. Lochridge also designed the Middoughs’ Men’s Shop on Broadway, which later became the Insurance Exchange Building and, with partner Horace Austin, designed the city’s second City Hall in 1923. 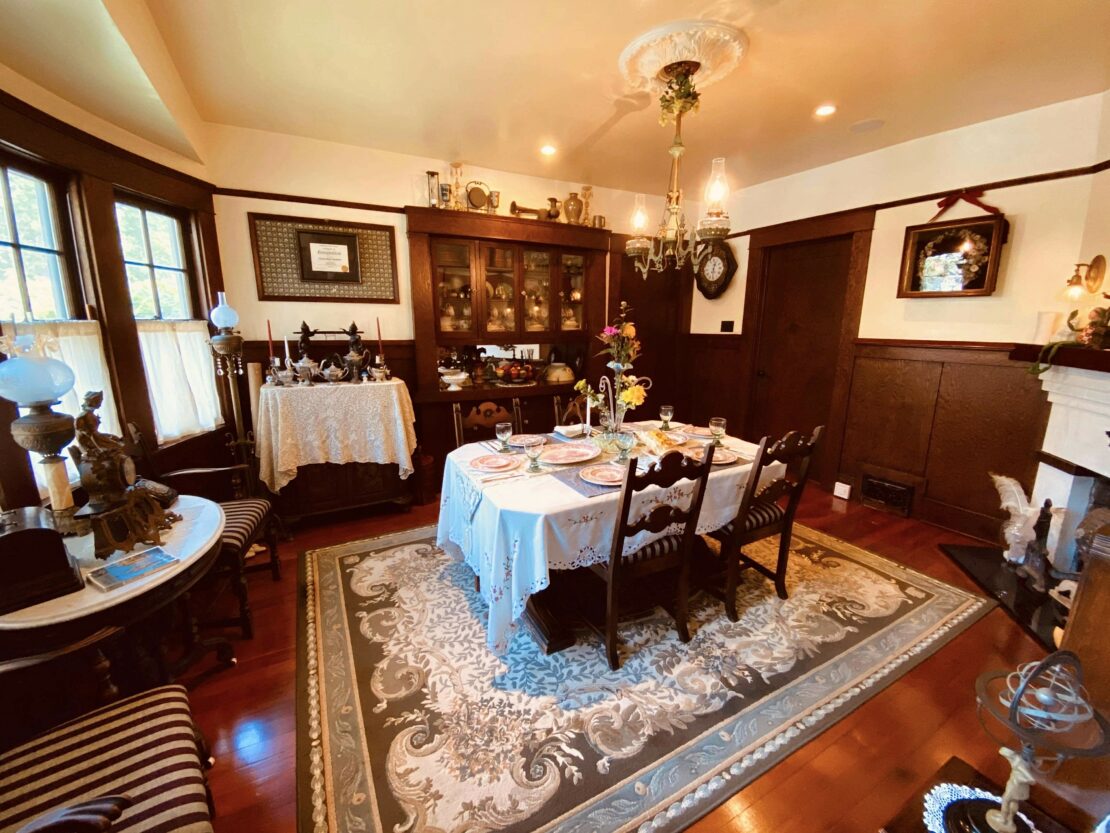 Lochridge remodeled the house, adding Craftsman touches, and he rented and lived on the second and third floors with his wife and children.

The house has had other owners throughout the years, but the most significant of all are its current ones, partners Mike Norton and Chris Myint, who bought the then-fairly dilapidated residence in 2004 for $625,000 and attacked it with a vengeance, throwing another half-million dollars in accomplishing a thorough and well thought-out restoration—actually, more than a restoration but rather a complete overhaul and vast improvement.

All of the wood in the house had been painted, and Norton and Myint hired a furniture company to come in and restore all the wood to its rich and dark natural finish. Walls were torn down, walls were built up, doors were removed or relocated—the place is packed with doors: There are 48 of them in the house, including six exterior doors (there used to be more, but the couple removed one of the front doors because, as Norton explained, “when we ordered pizza the delivery person didn’t know which door to go to”), as well as 78 windows, which are all of different sizes and configurations depending on which room you’re in.

They finished the third floor (which you may call an attic at your peril), and installed central air and heating. They scoured eBay and other sites on the internet, racked up hundreds of miles visiting salvage yards looking for furnishings, wood, lighting fixtures and whatever else struck their fancy. They drove to Dallas to pick up a sofa they liked, and, with help from architect Greg Lamb, added three bathrooms, to bring the total to five.

Aside from a modern refrigerator and showers, the house is a loyal period piece with all manner of curious niches, including a little telephone room in which a previous owner scrawled phone numbers on the wall in pencil. 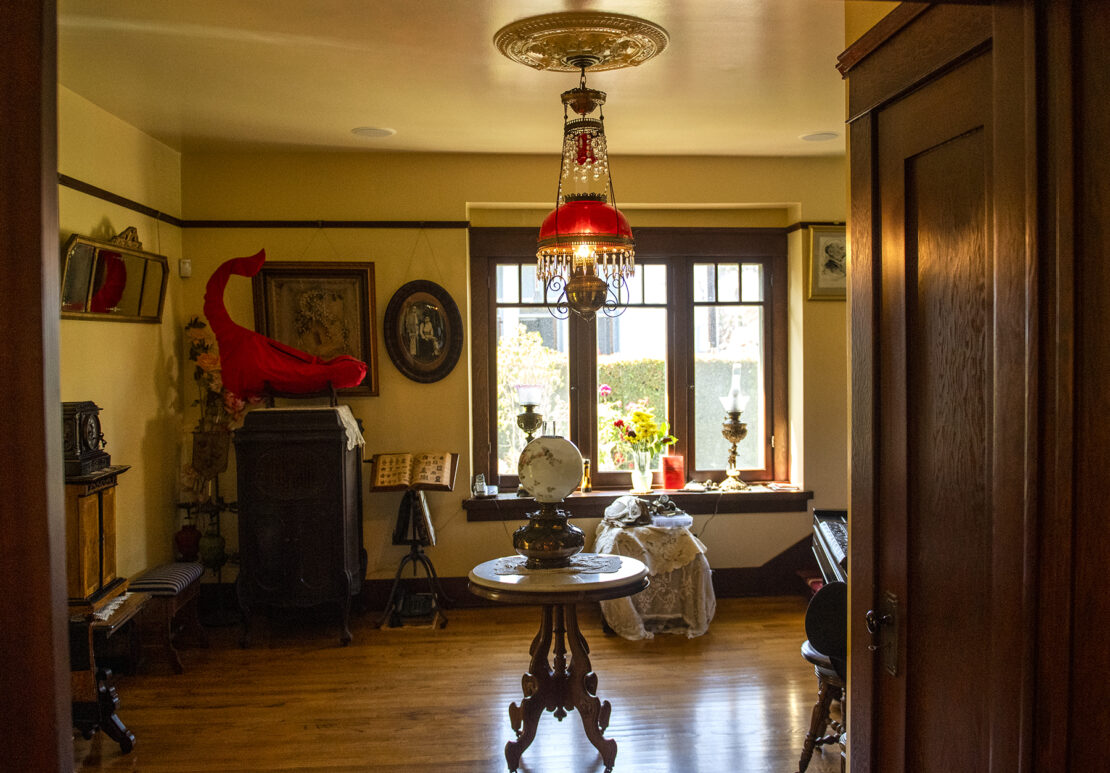 The music parlor from the living room in a house that was built in the early 1900s in the Bluff Heights neighborhood in Long Beach Friday, April 1, 2022. Photo by Thomas R. Cordova.

Norton and Myint’s work on the house, which they named the Pleasant View Manor (the original area upon which the house was built was called the Pleasant View Tract), was honored with an award from Long Beach Heritage in 2007 and has been featured on several home tours. “Thousands of people have paid money to see this house,” said Norton proudly as he led me and photographer Thomas Cordova on an admission-free tour of the residence.

The home, likely built in 1901 (though there are varying opinions) now has six bedrooms and five bathrooms over 3,173 square feet. It is in perfect condition, including new plumbing, new electrical and other upgrades.

Norton, a Realtor, will be listing the home later this week at a price of just a few dollars shy of $2 million, which is an absolutely fair figure for this significant and beautifully renovated and restored home. Norton and Myint also hope the home’s buyer will also want to purchase some of the furnishings of the house, which includes Victorian and Edwardian-era furniture, a Jacobean Tudor mahogany dining room table and a piano which has been in the home’s music parlor for generations.