Hollywood homes abound in Long Beach, a city frequently visited and employed by film companies who find it handy for its acting ability to portray any town of any size in the U.S. convincingly, as well as its proximity to Southern California movie studios.

Long Beach’s  waterfront properties can pull off a perfect portrayal of such places as Miami and other Floridian waterfront cities, and its Country Club section of Los Cerritos can play virtually Anytown, USA (as long as cinematographers can keep palm trees from photobombing the scenes), where middle class families inexplicably live in homes that, at least in Long Beach, sell for well over a million dollars.

One such home, which played the residence of Donnie Darko in the film of the same name, is on the market now, and if you doubt the house’s acting chops, consider that it played that “Darko” role as a home in Middlesex, Virginia. In fact, the house was so credible in its supporting acting role it more or less put Middlesex on the pop-cultural map. Google the town and all Wikipedia can say about it is, “It is notable for being the name of the main city in the film ‘Donnie Darko,’ though the movie was filmed entirely in California.”

The star home, at 4225 Country Club Drive, is listed by Realtor Jason Patterson of RE/MAX College Park Realty for $3.15 million — and it’s in great shape. The hole in the roof where a jet engine came crashing through in the movie is totally gone now, due to the fact that it never happened in real life; just another bit of Hollywood trickery.

The residence is as stately as any other on Country Club Drive, the most elegant of any street in the city, featuring one eye-popping old-money mansion after another.

The Colonial-style house, listed for $3.15 million, was designed by the famous Long Beach architect Hugh Gibbs, with a later addition designed by the equally famed architect Edward Killingsworth. It wasn’t the first time the two men had worked back-to-back on a project. Gibbs was the initial master planner of Cal State Long Beach, before Killingsworth took over the role in 1962.

While the house attracts its rightful share of architecture aficionados, it is perhaps even more of a draw from the cult followers of “Donnie Darko.”

“People come by and say they’re ‘Donnie Darko’ fans and ask if they can take a picture of themselves in front of the house,” says Patterson. 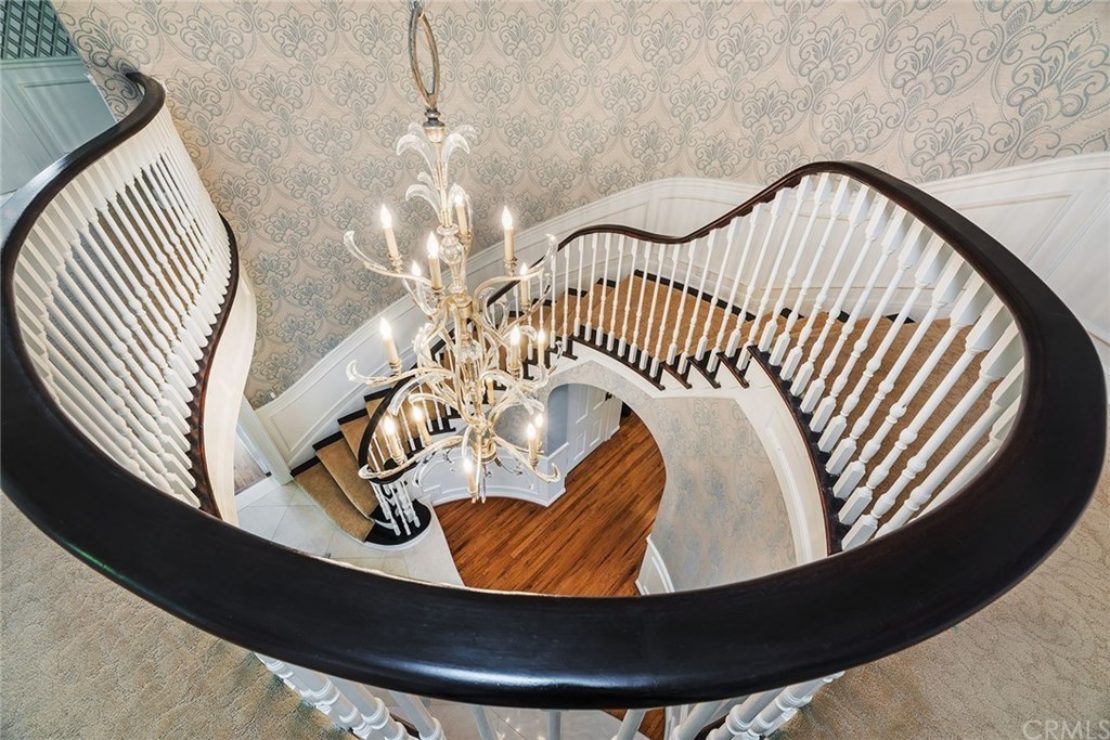 The staircase leading up from the grand foyer in the “Donnie Darko” house at 4225 Country Club Drive in Los Cerritos. Listing photo.

The interior of the home impresses visitors as soon as they enter, with a grand foyer featuring a sweeping staircase. Other features, as you venture inside, include a thoroughly upgraded kitchen, a formal dining room, living room, and a massive family family room highlighted by a hand carved custom marble mantle and grand fireplace. An elevator provides an alternative to the sweeping staircase to access the upstairs bedrooms and master suite with its marble master bath.

Though “Donnie Darko,” starring Jake Gyllenhal, with Patrick Swayze and Drew Barrymore, is the home’s biggest role, it has also been used for several commercials and smaller parts in the TV shows “CSI: Miami,” and “Joan of Arcadia,” and the feature films “The Girl Next Door” and the spoof “Not Another Teen Movie.”

The upper-class Los Cerritos neighborhood includes several houses with film careers, most famously the Ferris Bueller House from “Ferris Bueller’s Day Off,” at 4160 Country Club Drive. The “Ferris” house also had a turn in “The Girl Next Door,” as well as a bloody scene in “Red Dragon,” the prequel to “Silence of the Lambs.” 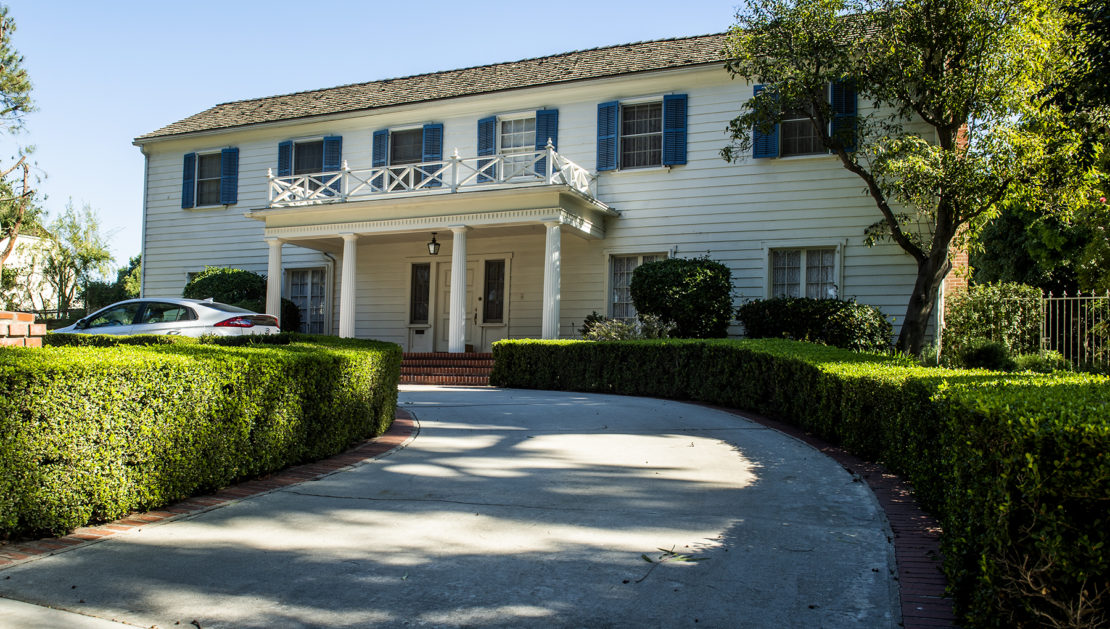 A home in Bixby Knolls that was featured in the movie “Ferris Bueller’s Day Off,” Thursday, January 21, 2021. Photo by Thomas R. Cordova.

The “American Pie House” house, at 4153 Cedar Ave., played the East Great Falls residence of Jim Levinstein (Jason Biggs), where the titular pie makes its ham-fisted appearance. Farther away from Los Cerritos, Poly High was used to portray East Great Falls High School’s interior scenes, while across-town’s Millikan High was used for exteriors. The Cedar house was featured in “American Pie’s” two sequels as well. In fact, “Pie 2” used a couple of other Los Cerritos homes, one at 4165 Country Club Drive, and the other at 3925 Cedar Ave. 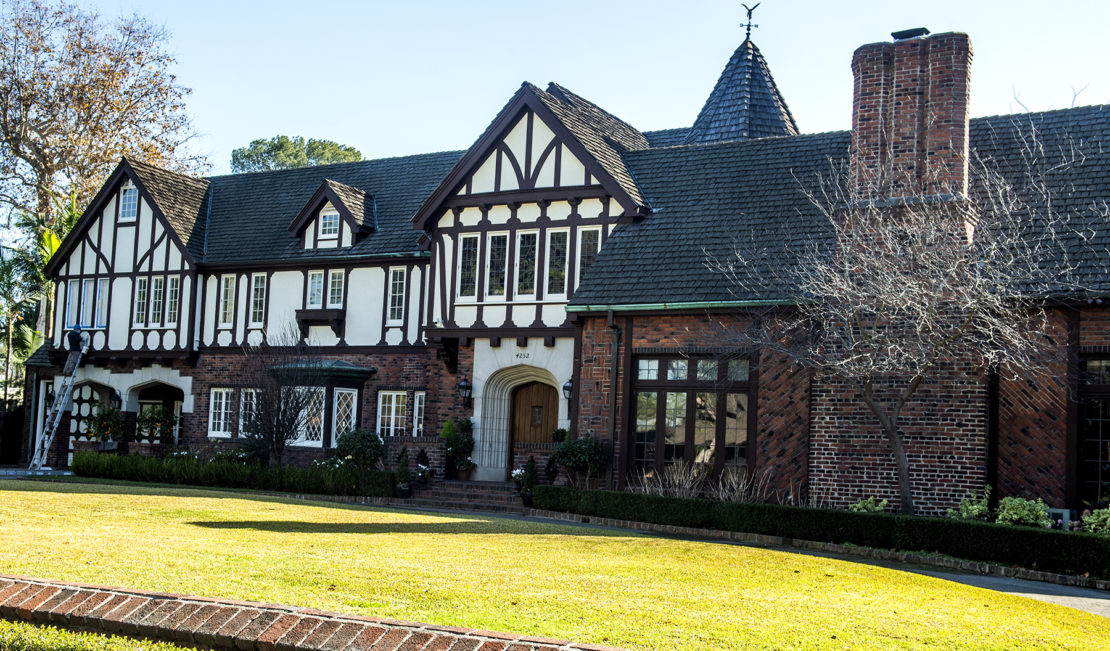 A home in Los Cerritos that was featured as the home of Patrick Swayze’s character, smarmy motivational speaker Jim Cunningham in “Donnie Darko.” Thursday, January 21, 2021. Photo by Thomas R. Cordova.

John Robinson, whose company Long Beach Locations, which represents several houses in Los Cerritos, says the neighborhood is most appreciated because of its appearance and ability “to portray a suburban neighborhood in any Midwestern city.”