For a bit more affordable homes, the Inland Empire is the land of opportunity • Long Beach Post News
- ADVERTISEMENT -

Whenever I write that homes in Long Beach priced under $600,000 are “relatively affordable,” a lot of commenters take issue with the fact that $600,000 isn’t affordable for most people and that Long Beach prices are forcing home-buyers away from the coast into the Inland Empire, where prices are more affordable—though still only relatively: $400,000, which will buy a home in the IE is still a lot of money, especially to live in a place that’s increasingly uninhabitable, with three-digit temperatures posing at least as great a near-time peril as rising sea levels along the Peninsula.

Homes listed at $400,000 or less in Long Beach, aside from small condos and mobile homes, are virtually extinct now.

There are a couple in Long Beach that I’m not even going to show you because there’s no way I can suggest you purchase either of them and still get a bit of sleep at night. One, at $349,000 is the size of a kissing booth at 384 square feet. The other, at $255,000, the cheapest house in Long Beach, is something I’d hesitate to call a house. It’s literally attached to its neighboring house and, while it quacks like a duplex, it isn’t one. It’s a conjoined twin to its neighbor. And even if you can live with that architectural aberration, the listing casually notes that the property is currently inhabited by a non-paying occupant and will not be vacant at the time you take ownership. Couple all that with the fact that it’s in a neighborhood that tends to pop up on our police blotter with some frequency and your research is complete.

So, it’s off to the Empire of the Inland, a wide-open chunk of California that’s at least an hour’s drive from the ocean and a population of more than 4 million spread out over a sprawling area that’s larger than 10 U.S. states (including West Virginia, and if you want affordable, the Mountain State, with its median home price hovering around $107,000, is for you).

Perhaps you’d be interested in this shack in Twentynine Palms. The ask was $25,000 and includes five acres of desert land. The listing agent warned that “historic cabins that haven’t been remodeled yet in prime locations like this are increasingly hard to come by,” so you’re advised not to dawdle. 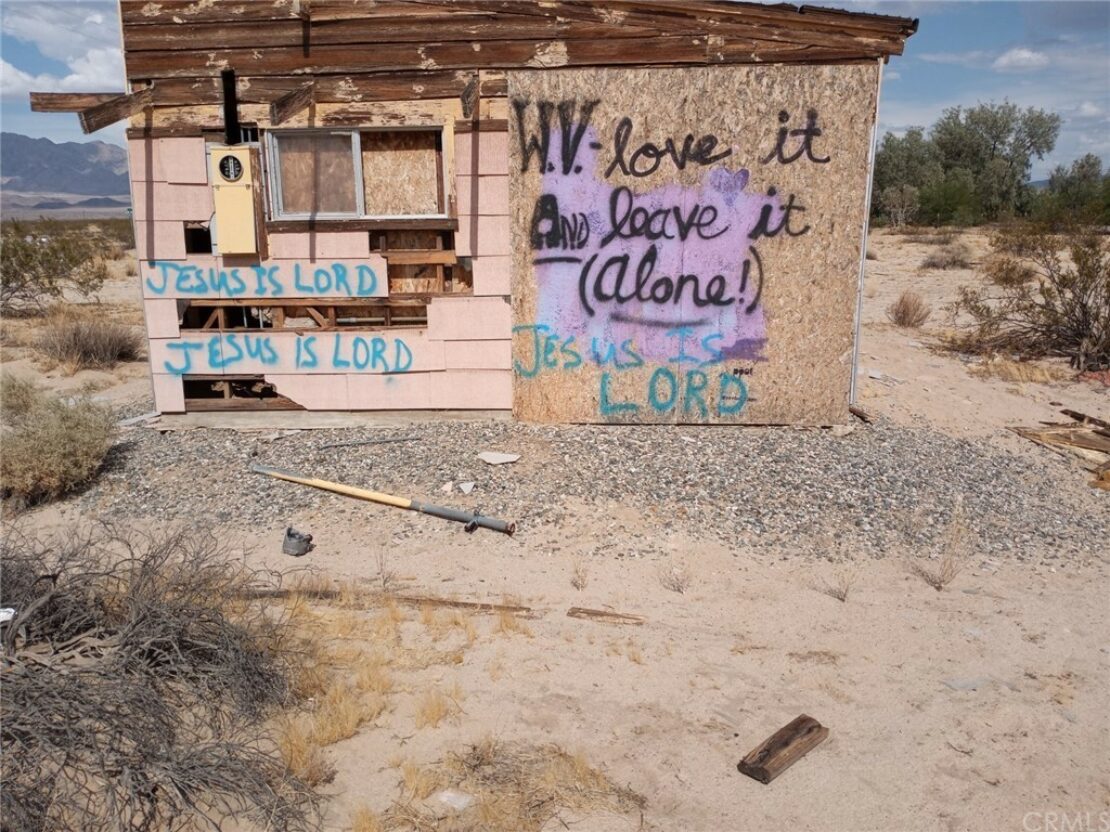 This structure in Twentynine Palms is listed at just $25,000. Listing photo.

OK, I wasn’t really suggesting a shack for the first-time homebuyer. For a more serious customer, here’s a perfectly serviceable family house in Moreno Valley, a three-bedroom, two-bath home listed at $365,000 that would go for at least double that amount in Los Altos. It’s got an upgraded and fairly large kitchen as well as upgraded bathrooms. Plus life-saving AC and a fireplace.

If it’s just the two of you looking for a home, here’s a cozy Craftsman cottage in Colton on West N Street that’s going to move briskly at $280,000, about what a broken milk crate with light fire damage would go for in North Long Beach.

It’s a nice-looking place with a family room and a fireplace and the fact that its listing agent neglected to use the word “cute” in the home’s description is either a horrible oversight or an example of admirable self-restraint. 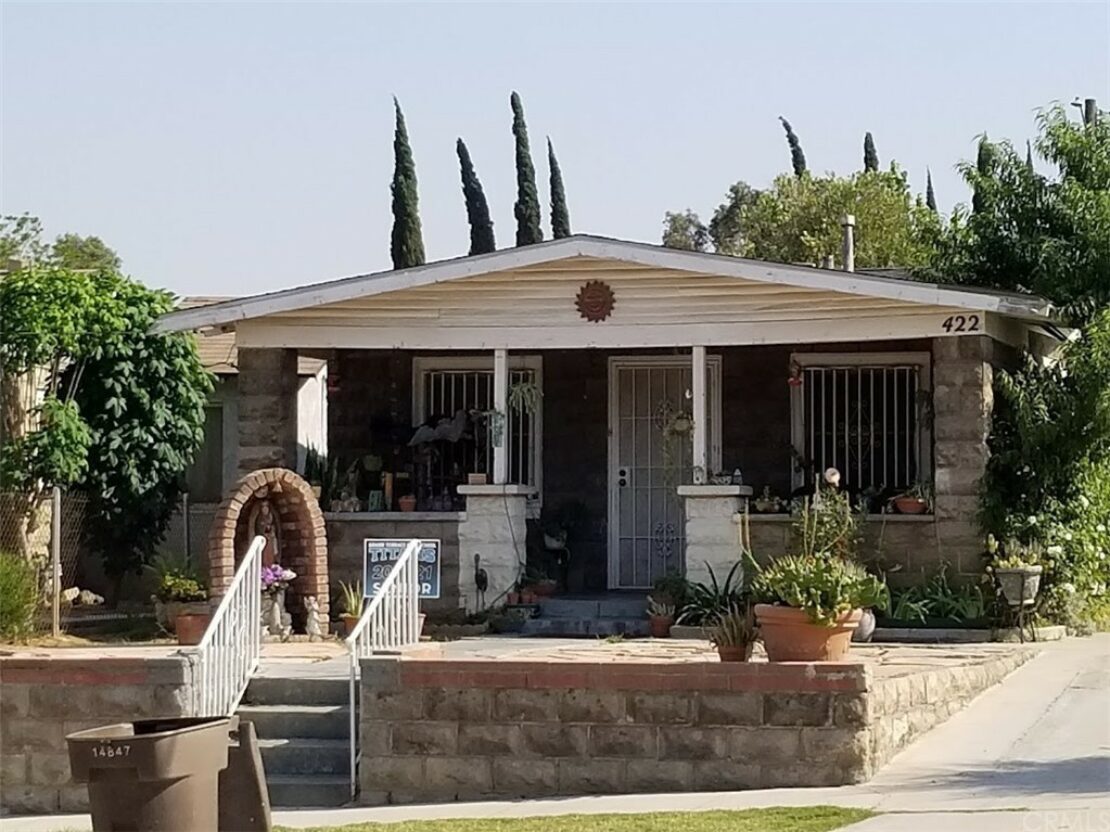 Maybe you have more exquisite taste and a hunger for the finer things in life, like access to swimming pools, tennis, complimentary golf and a clubhouse. You’re gonna love this one, until you get to the part about Homeowners Association fees.

This fairly new (1989) three-bedroom, two-bath beauty is fully renovated and situated hard by Palm Springs in Desert Hot Springs. It doesn’t have the hip mid-mod cache of the PS crowd, but it does have the aforementioned amenities. The house, in Mission Lakes Country Club, is listed at $350,000, but before you open your checkbook, be advised that there’s a price you pay, even for “complimentary” golf. The HOA fees are $361 per month.

Buy a house in Desert Hot Springs’ Mission Lakes Country Club, and pay the HOA fees and they’ll let you in the pool. Listing photo.

Before we head back to the cool, breezy coast, let’s look at a nice little two-bed, one-bath cottage on Cedar Street, a short walk to Riverside’s downtown. The place has “flip” written all over it, having been sold in April of this year for $150,000 and now listed at $399,900. 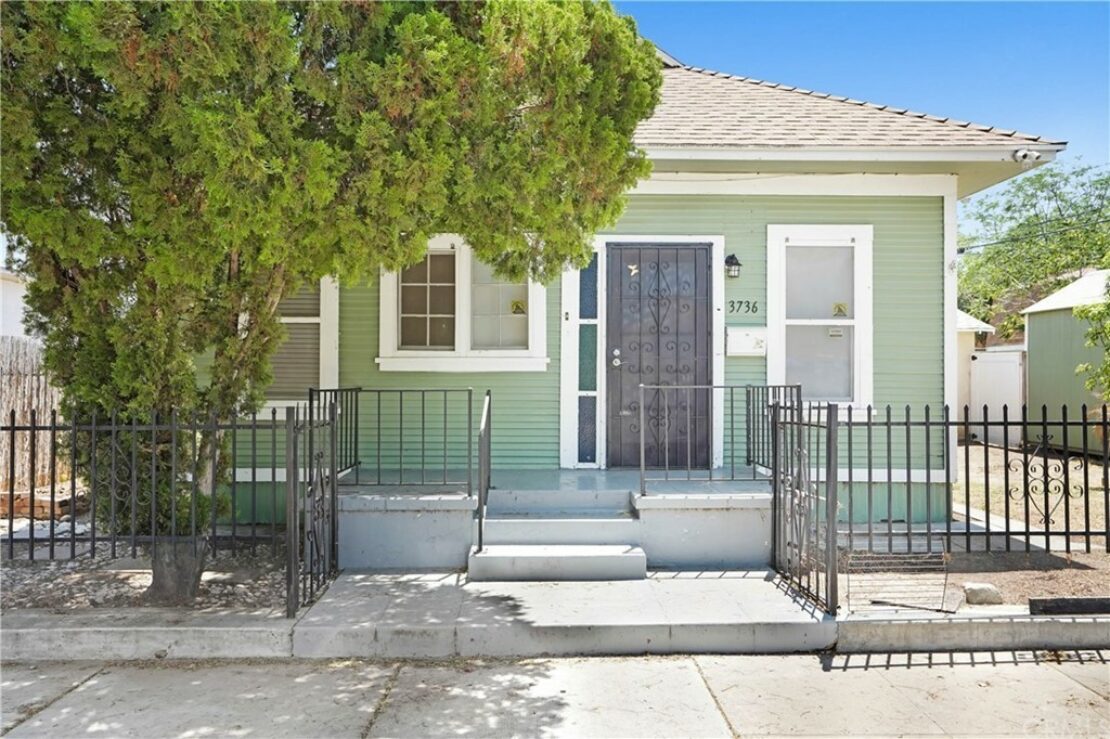 The 847-square-foot house has been thoroughly renovated with new flooring, new paint, new kitchen cabinets and new appliances, so it’s all ready for you to move in without any need for “elbow grease,” as Realtors say when a house needs a lot of work.

So, if Long Beach is too pricey and you don’t mind a bit of a commute, and you have an affinity for mercury-shattering temperatures, you might want to check out the state-sized Inland Empire.