The “Esser House,” a stately and perfectly preserved townhouse-style duplex on the corner of First Street and Bonito Avenue, is on the market now, listed at $1.85 million.

It’s a tad pricey, but it’s a prestigious property, a Long Beach Historical Landmark (complete with an official marker) and it’s a Mills Act Historical Property, which gives its owner valuable tax benefits.

The asymmetrical design of the building is a key part of its architecture, and a reason its two units aren’t identical, although both are in the neighborhood of 1,650 square feet each.

Unit No. 1 is three large bedrooms, two baths, a large living room, a kitchen and dining room. Unit No. 2 features two large bedrooms and two bathrooms. There’s an additional small “bachelor” apartment on the lower level that’s about 200 square feet and has a bathroom, but no kitchen. It could be used as an office or, in these days when housing is increasingly scarce, as a rental, says Jacques.

The name of “Esser House” prompts the question: Who is Esser? William J. Esser was the duplex’s builder in 1929, and its historical marker, bestowed by the Long Beach Cultural Heritage Commission in 2000, perhaps over-enthusiastically states that Esser was “a successful Long Beach builder whose work included the now demolished but famous Pacific Coast Club.”

The architects of the Pacific Coast Club, which stood at 850 Ocean Blvd., east of Alamitos Avenue, from its opening in 1926 until its demolition in 1988, were Claud Beelman and Aleck Curlett (who designed the Insurance Exchange Building, the Cooper Arms, Farmers & Merchants Bank and several other notable buildings) and its construction was done by C.T. McGrew & Sons, another business with historical buildings to its credit, including the Los Cerritos adobe and numerous residences in the Los Cerritos neighborhood, including a home at 165 E. Roosevelt Road, which was built for Charles T. McGrew’s son W. Milton McGrew.

Esser was a construction foreman for C.T. McGrew & Sons, an important job to be sure, but you wouldn’t call the Pacific Coast Club a William Esser production.

Nevertheless, Esser did a fine job in the construction of his namesake house, which he never lived in; he built the duplex for Peter Coleman.

The duplex’s two units have been renovated, but remain historically faithful to the original design. The current owner, says Jacques, has taken great pride in retaining the building’s history and architectural appeal. 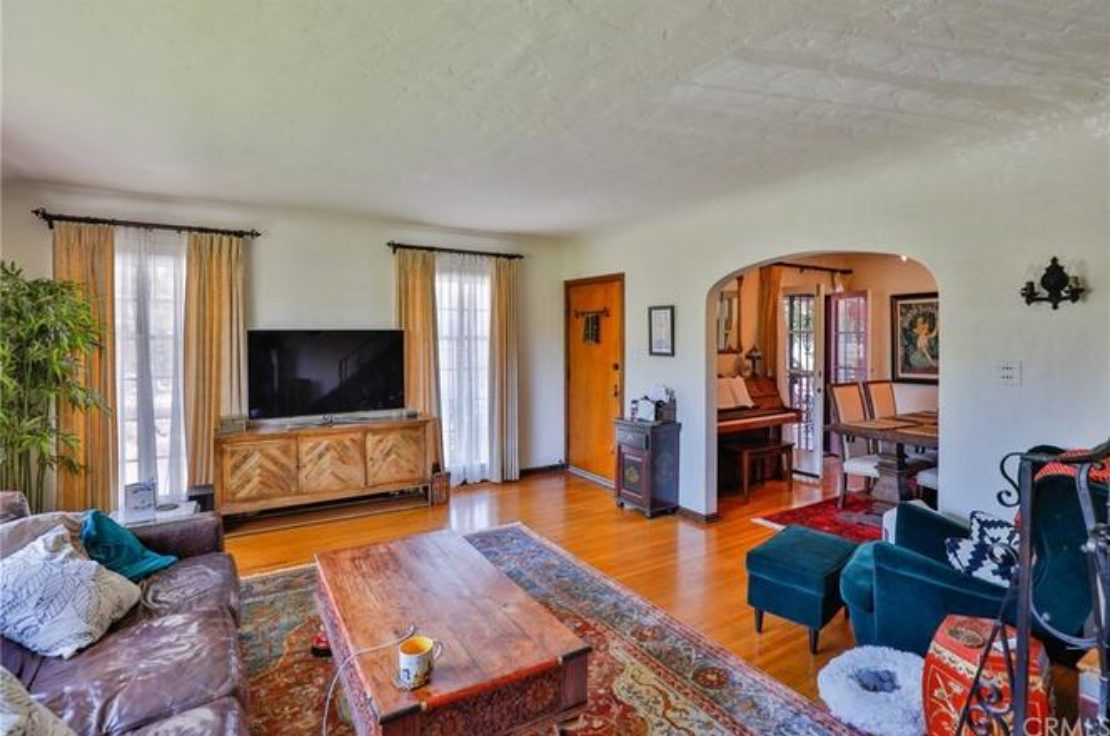 The living room in one of the Esser House duplexes. Listing photo.

Esser built the house during a sliver in time between the booming 1920s and the beginning of the Great Depression. It is Spanish Colonial Revival in design, a style that was increasingly popular in the coastal neighborhoods of Long Beach at the time.

Some of its standout features include stucco walls, oak floors and pine trim, terra cotta Mission tile roof, a balcony above the building’s three garages that have their original wooden doors and hammered wrought iron hinges.

Following the completion of the house, Esser left C.T. McGrew and began his own construction firm, W.J. Esser & Sons, whose projects include the 1954 construction of the four buildings that made up Rancho Esperanza, the Long Beach Honor Farm that stood east of the San Gabriel River and south of Carson Street. That compound was near today’s Town Center. The firm also built a 50-bed wing of Community Hospital in 1958.