First, let’s agree that Sunrise Boulevard in Long Beach isn’t a boulevard as we’ve come to understand the word. It can puff out its chest and call itself one, but it doesn’t rise to the level of a wide, busy thoroughfare. Rather, Sunrise trickles quietly off busy Atlantic Avenue a couple of blocks south of Willow Street, and meanders slowly past a handful of houses before it merges briefly with Burnett Street and ignobly dead-ends at a wire fence with a yellow sign that tersely and definitively declares “END.” 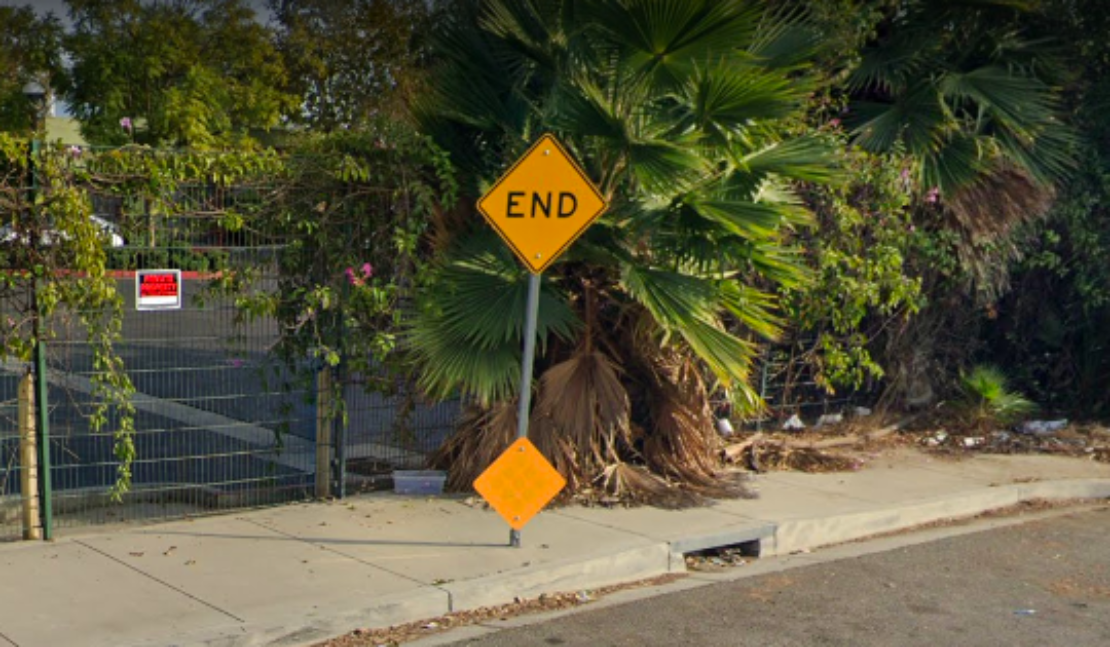 The end of the boulevard. Google Street Maps.

Every day, thousands of cars on northbound Atlantic pass without noticing the turn for Sunrise Boulevard, never realizing the road leads to the Sunrise Boulevard Historic District, notable for its egalitarian mix of architecture that was instituted there in the early 1900s, with small bungalows built for the working class, midsize Craftsman and Spanish Colonial Revival homes for middle class and large, sprawling Craftsman mansions for the wealthy and prominent residents of the 70-home tract.

It’s the latter that most distinguishes the community, save for the tract’s little El Cortez Motor Court, which is now a set of small but cool apartments with interesting interior touches such as built-ins and miscellaneous niches.

The area was originally a ranch and miles of flowers were grown around the area, which became known as Burnett in honor of railroad man Thomas Burnett who established a station  there for the Terminal Railroad. The station was a boon for the local farmers who could ship their flowers and crops. It put the Burnett tract on the map and led to the area’s later development.

In 1907, a physician, Charles Sanford Porter, built the Porter Milk Diet Sanitarium on Sunrise Boulevard. The diet and its therapy sounds like quackery, but who wouldn’t try something that entailed spending an entire month in bed in an open-air pavilion drinking quart after quart of room-temperature non-pasteurized Holstein milk (and no other food or beverage) and taking two hot baths a day? 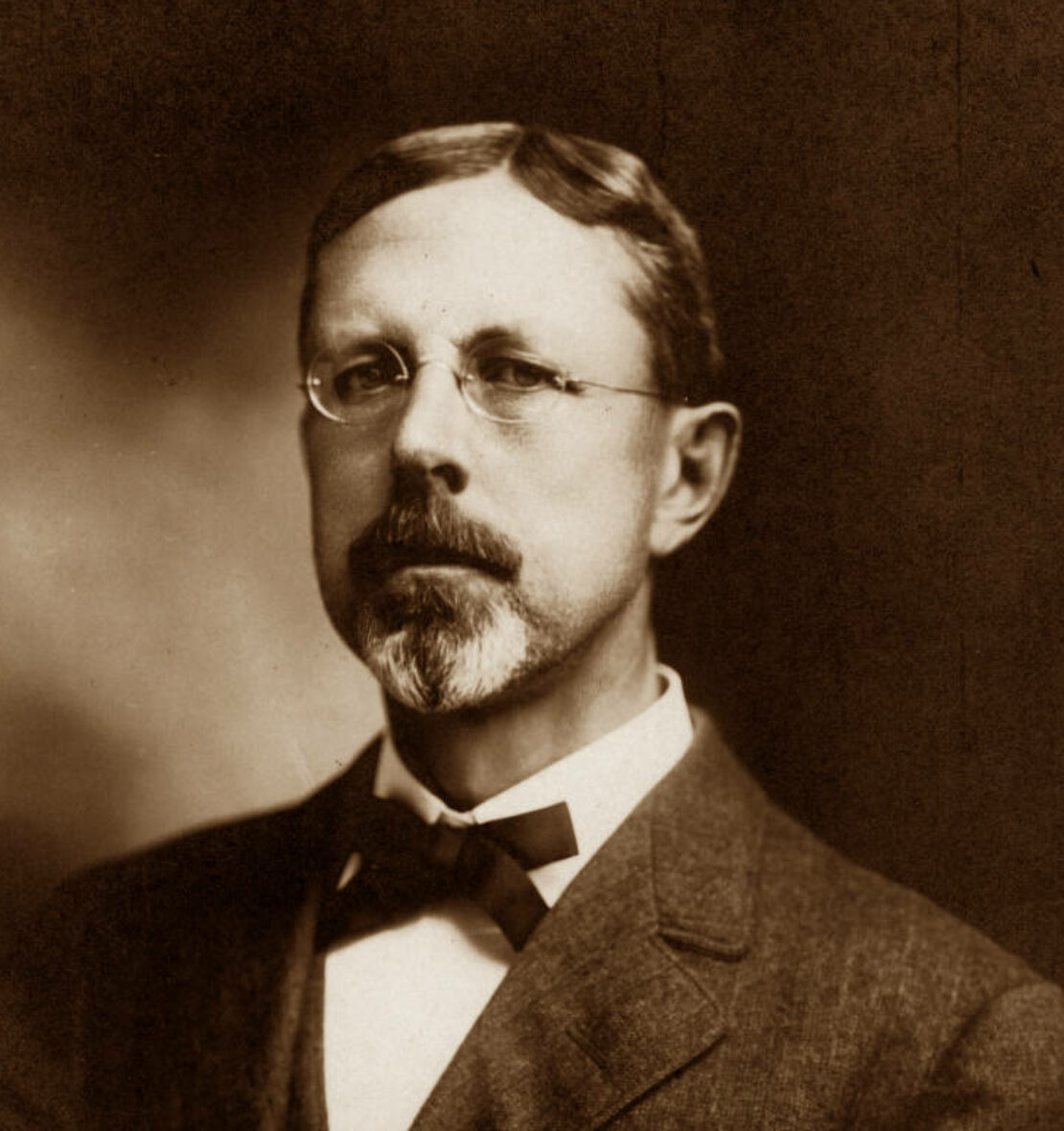 The sanitarium lasted until 1924, by which time many of the notable houses in the district had sprung up, including the historic Harnett House at 730 Sunrise Blvd. The Tudor Craftsmen was built by Ernest and Harriet Harnett, who emigrated from England in 1889 and raised 13 children—all but three born in England—in the house, many of whom went on to become leaders in Long Beach’s development. These included Jane Harnett, one of the first teachers at Long Beach High School, later head of the history department at Poly, and an early historian of the young city.

Jane died of pneumonia during the Spanish Influenza outbreak in 1918; her father, Ernest, died the day after her funeral when he was struck by a car on Atlantic Avenue near 23rd Street.

Houses of the Harnett’s sort rarely hit the market in the historic district, but one across the street, at 735 Sunrise Blvd., is listed now by Realtor Mark Vinton at $785,000.

It’s a beautiful old two-story Craftsman set on more than a quarter-acre lot that’s dotted with century-old trees. If $785,000 seems like a steal, it is, and whoever ends up buying it will likely have to pay more than the asking price.

The home’s most recent owners were George and Polly Johnson. George died in 2015, and Polly, who was the granddaughter of patriarch Ernest Harnett, and last remaining member of the family who was still living in Long Beach, died last year.

“They were well thought of by the neighbors,” said Vinton. “Their passing was a loss for the neighborhood.”

So now the family’s home is on the market for the first time in 65 years, and it’s been drawing interest from both serious home-shoppers, and a curious public. Vinton held open houses at the place on Sept. 18 and 19 and, he says, about 550 people showed up to stroll through the residence, with some making serious offers, which Vinton said, would be reviewed by the sellers. It wouldn’t be a shock if the house were to fetch close to a million dollars. 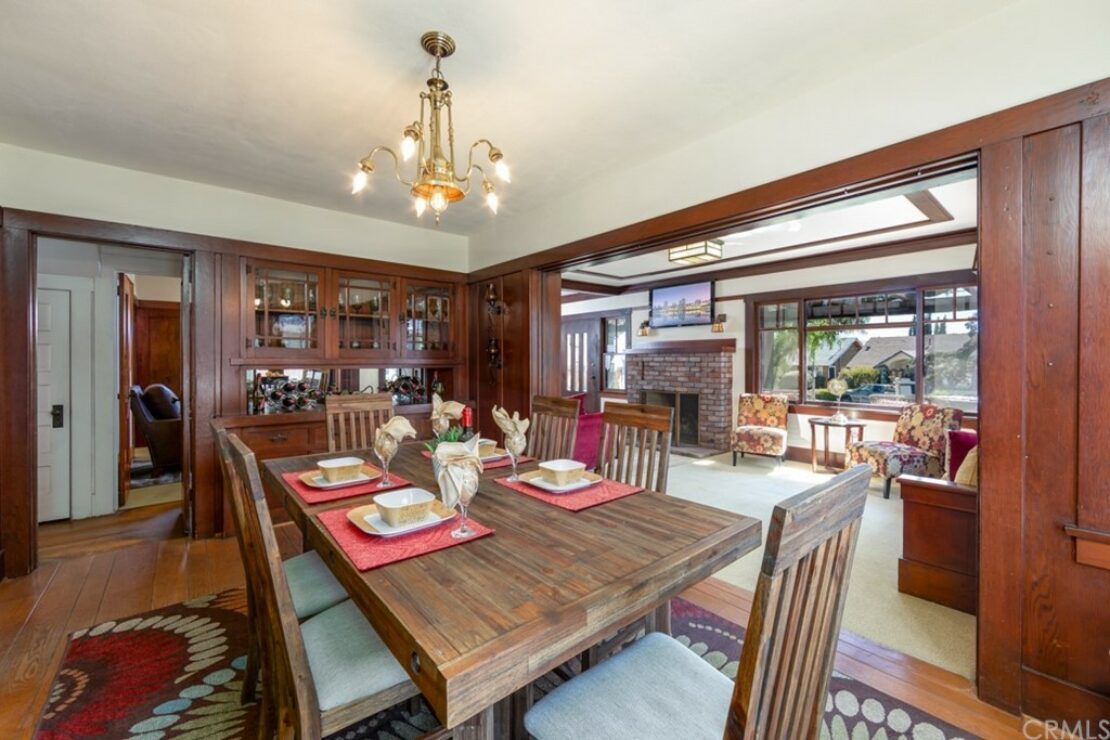 The living room and dining room of the Craftsman home at 735 Sunrise Boulevard. Listing photo.

The 1,900-square-foot house looks inviting from the street, with its long, wide front porch protected by shade trees. It practically begs you to pull a chair and enjoy a tall glass of sarsaparilla and a game of checkers.

Inside, there’s lots of spectacular woodwork, including solid mahogany doors, rolling pocket doors, and wood entryway and window trim. Plus high, coffered ceilings, wall sconces, a wood-burning fireplace and a rare basement that’s unfinished but wouldn’t take much to convert to a wine cellar.

Three of the home’s four bedrooms are on the ground level, with the master bedroom upstairs. The dining room has more beautiful woodwork, including a built-in buffet and cabinets and French doors that open to the outdoors.

The garage in the back has a bonus room on top and the long driveway from the street can easily accommodate six cars.

Additionally, the home’s history can likely qualify for Mills Act tax benefits. Because the house is in a historic district, there are restrictions regarding what you can do with the exterior, but you likely wouldn’t monkey around with this excellent example of early-20th-century Craftsman architecture in this hidden Central Long Beach neighborhood.