Column: Leaving California? Here are some homes in the states you're fleeing to • Long Beach Post News
- ADVERTISEMENT -

California is one of the biggest and most frequent categories of complaints Californians have. There’s too much tax to pay, too many regulations, not enough attention paid to small business, there’s too much traffic, gripe fed-up Californians. It’s run, they say, by Democraps, libtards and snowflakes and the second I can retire my wife and I are packing up getting the hell out and going to… I don’t know, throw a dart at a map of the US.

There isn’t much to say to these folks other than “K, bye, and don’t let the Golden Gate hit you on your way out.”

For real estate purposes, let’s guess that these people bought a home about 20 years ago in Long Beach for about $200,000 and, now, thanks to rising home prices (something that they didn’t complain about), they’ve sold their home for about $680,000, which is the median sales price for a home in Long Beach, though, realistically, that’s way low for anything near the coast, and a little low for almost anything in East Long Beach, but $680,000 it is.

Today, we’ll look at what kind of house you’ll be looking at as California slowly disappears in your rearview mirror and you feel a twinge of sorrow for leaving the most beautiful state in the country, watching your dreams die as you set off to polish off your life settling for a little to a lot  less.

In Washington you’re going to be lucky enough to end up in Seattle, though your newfound wealth will put you in a similar residence to the one you just left, because the city’s median selling price is $699,999, just a lousy 10 dimes under $700K. 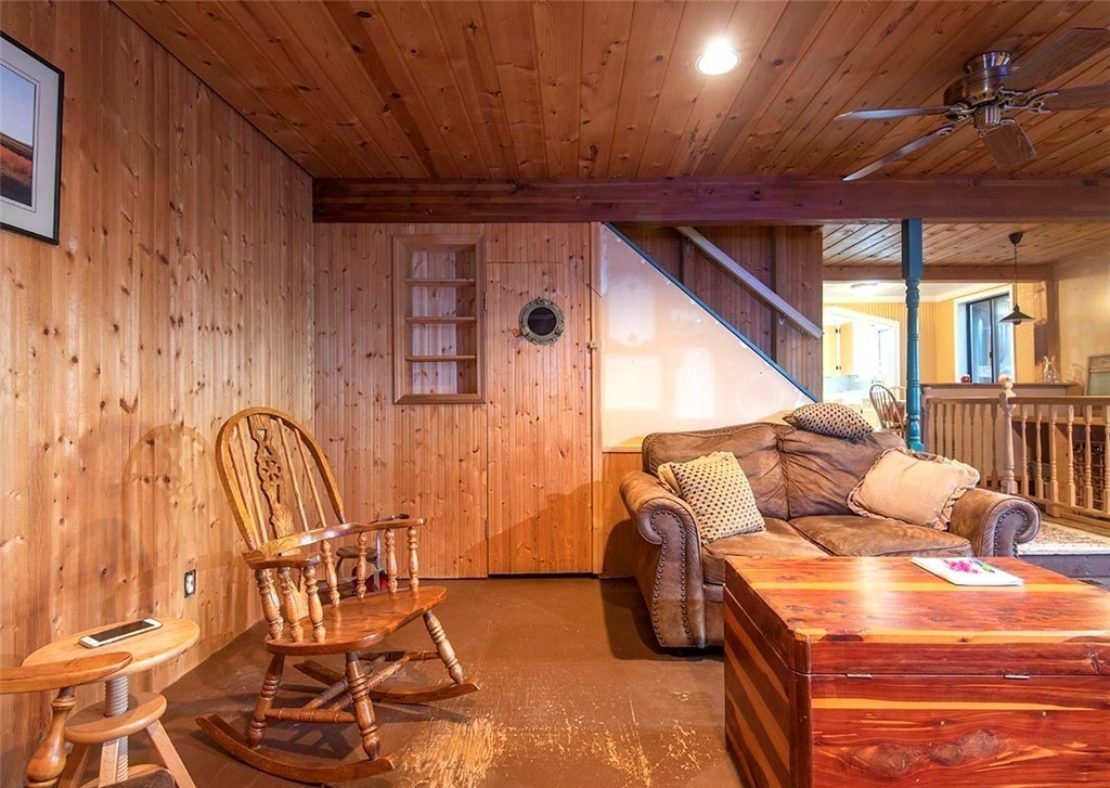 Don’t take this the wrong way, but you seem like a fairly rustic sort of person, which is why you’re getting this below-market-cost relentlessly knotty pine-paneled four-bedroom, two-bath, two-story home in the overly-aptly-termed Pinehurst neighborhood of Seattle. Knotty pine walls, knotty pine ceilings, knotty pine bedrooms. The kitchen? Not knotty pine for some reason. The 1932 home is listed at $629K, leaving you with enough money to stock up at the nearby Safeway.

Next, it’s off to Texas. You’re not gonna want to live in Austin when you move to Texas, because the city is loaded with Californians and you, more than anyone, should know what they’re like. You didn’t move to Texas just to live next to some grouch from Downey and listen to him or her natter on about taxes. 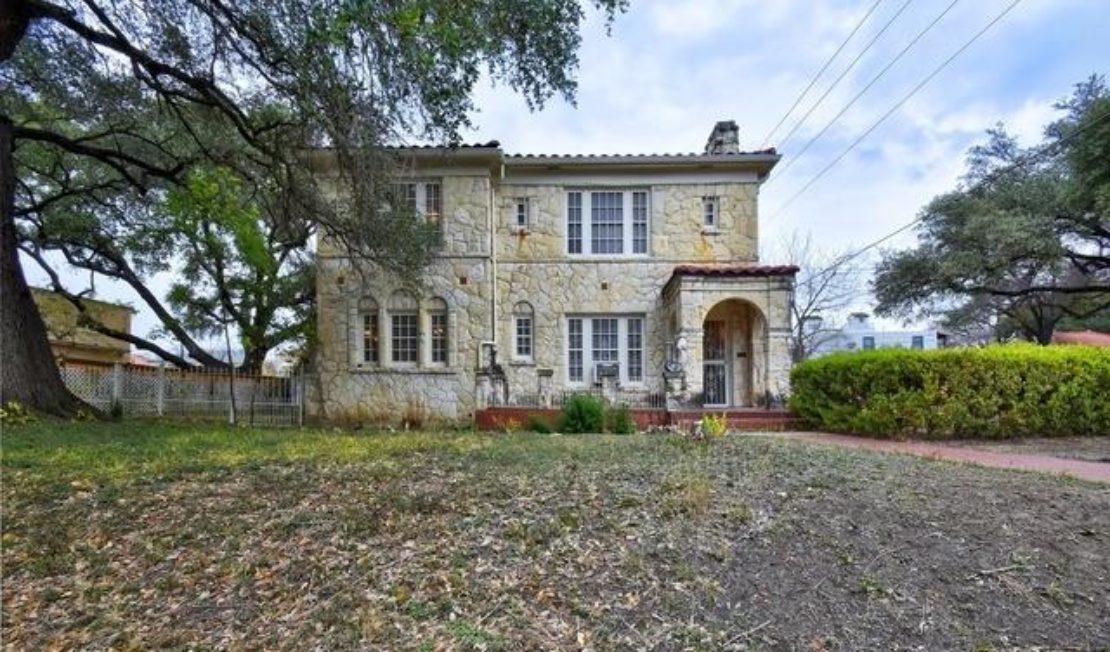 You can pick up this 1936 Nathan Straus Nayfach-designed home in San Antonio for $399,000. Listing photo.

Rather, you’ll be heading down to San Antonio, Texas’ second-best city, where you can pick up this hypestately 1937 home designed by San Antonio’s most famous architect, Nathan Straus Fayfach, which would go for over a million anywhere on the California coast, but, because it’s in Texas instead, you get it for $399,999. Yes, the five-bedroom two-story old-school palace needs a bit of work, but you’ve got a couple hundred thousand from your overpriced Long Beach home to handle it.

The residence has original tile in all baths, chandeliers, iron railings, a grand staircase and sits on a quarter-acre lot.

Sliding back closer to California, you’re not getting off easy with your Arizona home. A relocate expert with a shred of mercy would put you in piney and pleasant Flagstaff, but instead you’re going where everybody else goes, Phoenix, where you’ll learn how much you hate California’s taxes and regulations while enjoying the vaunted Phoenix sunshine, which blistered the city with 145 days of triple-digit heat in 2020, including 53 days when the mercury exploded at 110 degrees or hotter.

Happily, you’ll discover a new target for your unhappiness: Your utility company. Phoenix homeowners pay an average of $477 a month during the summer to keep their air-conditioning on, and themselves alive. 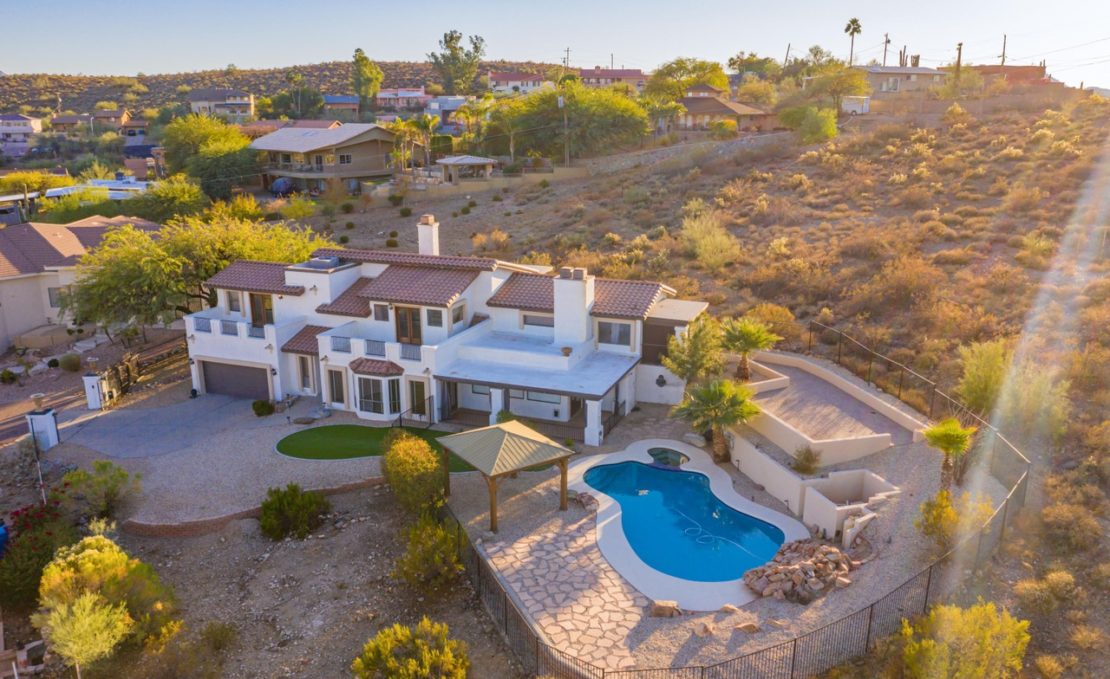 Here’s a place in Phoenix where you can chill out in the pool of by one of its fireplaces in a town that saw 145 days of triple-digit heat in 2020. Listing photo.

Still, get a load of this pad you can pick up for just $655,000:  A gated Italian villa on a mountainside slope. The home includes three wood-burning fireplaces, three bedrooms, three bathrooms, three private terraces and a kitchen with imported Iroko wood cabinets/granite counters, stainless steel appliances, and decorative plaster frieze sculptures from Milan. Just a hunch: A house this size is going to cost more than $477 a month to cool, especially when you’ve got all three fireplaces stoked and burning.

Oregon. Oregon makes sense. You’re still getting a lot of the beauty you abandoned in California, though without the sunshine. The best parts of the state, as is the case with California, are near the coast or at least near a roaring river. 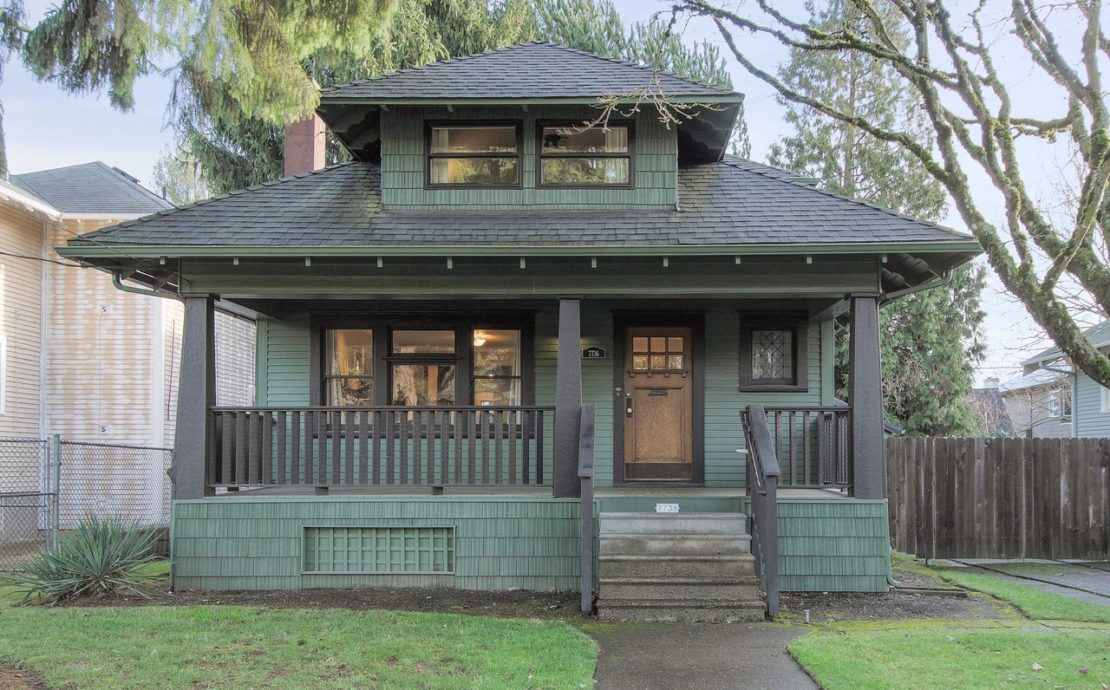 The home we’ve selected for you is a 1916 two-story bungalow in Portland that just screams Oregon with its dark green with darker green tint. Toss this home in a nearby rainforest and it would disappear.

The first floor has the living room, upgraded kitchen and one bedroom, while the second floor is all given over to the master suite.

And then, there’s Nevada, the third-most popular state to which disgruntled Californians flee, and it is hard to imagine Nevada ever being a soothing balm for disgruntlement; it seems like more of a place you go to get angrier than you were to begin with.

The pickings are slim: Las Vegas, North Las Vegas and a string of towns along Interstate 80, including Reno.

Like Texas and Washington, Nevada has no income tax (while Oregon has no sales tax), which one would imagine is somewhat of a reason to leave California. For that financial luxury, you can expect summertime highs of 114 degrees, which Vegas proper got in mid August of 2020, along with more than a week of consecutive days of 110 or hotter.

We’re going to put you in North Las Vegas, where it’s virtually impossible to spend your California money on a single residence. Your $680,000 could buy a grip of homes in this sequel city to Las Vegas where the average listing price is $305,495. 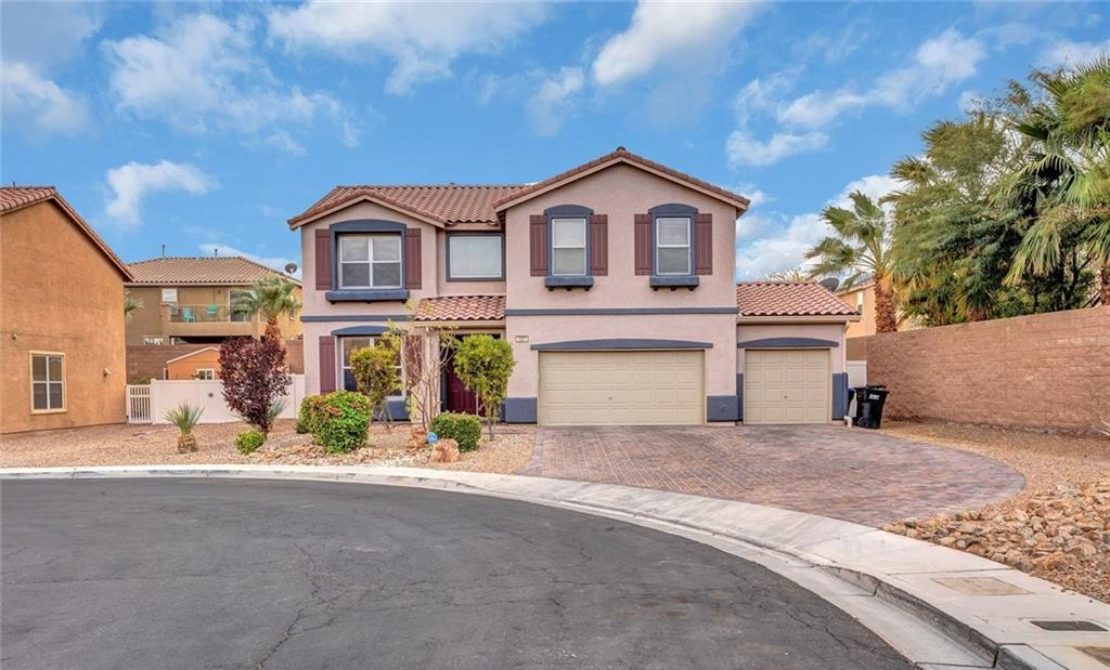 But you’re fat with California cash, so you splurge for above average and get what certainly looks like an average North Las Vegas home: It’s got three bedrooms and three baths, an upstairs loft and a “retreat” off the master bedroom. The listing agent says the backyard has plenty of space for family fun and possible RV access with minor adjustments and HOA approval, which should make you ask yourself has any HOA ever approved anything?

The HOA dues, incidentally, are $16 a month. That’s how they get you in states where there’s no income tax. That, and the utility bill.