Imperial Estates, tucked so far into a corner of northeast Long Beach that it’s all but in Orange County, is an area of town where you’ll find the occasional Storybook home.

The tract, roughly bordered by Norwalk Boulevard and Coyote Creek, between Wardlow/Ball Road and 226th Street, opened up in the 1960s when new homes there could be snapped up at less than $20,000.

The area, far from the mean streets of Downtown and Central Long Beach, was favored by Long Beach police officers who, at the time, were required to live in the city in which they served, as were other city employees. So many police purchased homes in the area that it became known as Cop Flats. Former city councilman and port commissioner Doug Drummond, who was a policeman in the 1960s, purchased a home in Imperial Estates in 1962 for $18,740. “I’d say at least half the residents in the area were city employees,” he recalled.

But that’s not the story in today’s column. Dotting the tract, and also popping up in some adjacent areas such as Lakewood’s Rynerson Park neighborhood, are a number of Storybook homes, inspired, undeniably, by Disneyland, still a relatively quaint wonderland in the late 1950s and early 1960s.

Classically, Storybook homes are generally several steps above and several decades older than the tract models. True Storybook homes generally cost in the millions of dollars and are marked by more expensive touches including artisan shingled roofs, stained or leaded glass windows and use of serpentine courses of clinker brick. 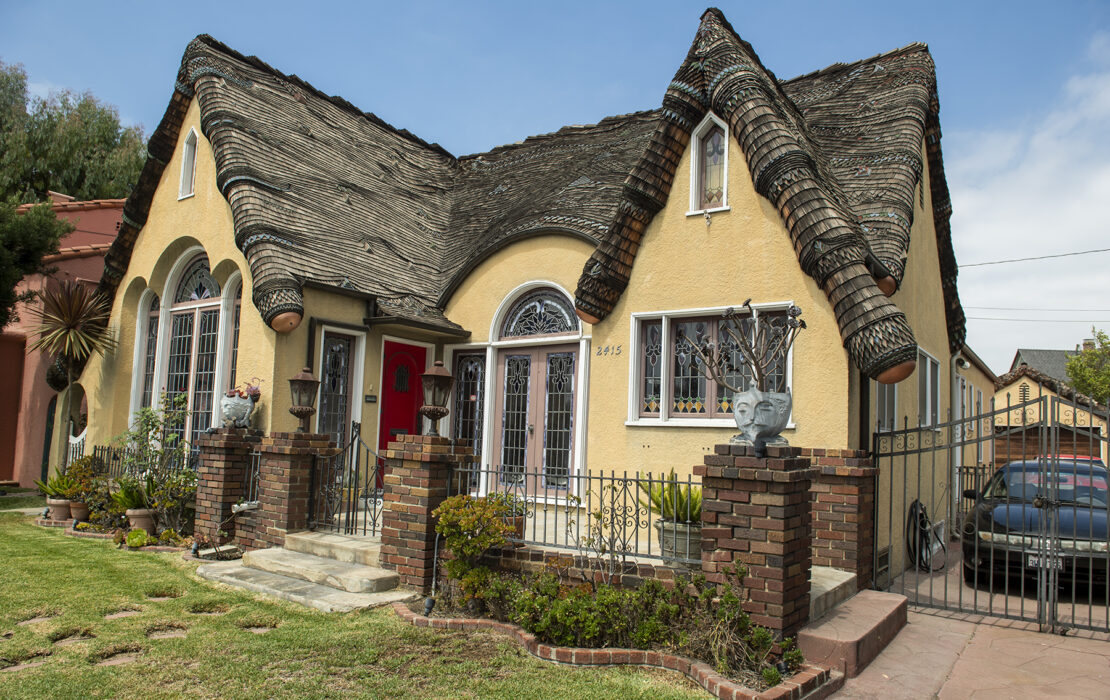 The tract style of Storybook homes were a lot more affordable and came into favor in the mid-1950s before fizzling out about a decade later.

The true Cinderella Homes were designed by Jean Vandruff who, with his brother Shannon, built fairytale-inspired homes marked by diamond-shaped pane windows, high-gabled peak roofs that often sloped all the way to the ground (those long, steep roof lines are called, in a delightful bit of architectural jargon, “catslides”), gingerbread trim, scalloped fascia and bargeboards, decorative trim on faux shutters and planter boxes or shelves below windows.

The Vandruffs built a tract of 168 Cinderella Homes in Anaheim in 1955, the year Disneyland opened, and sold the entire batch in three days.

The homes continued to be built elsewhere in Orange County, and in states farther to the east.

In Imperial Estates there are currently a couple of Storybook tract homes for sale — or, actually, one and a half because one, at 3681 Monica Ave., is a pending sale, listed at $795,000. 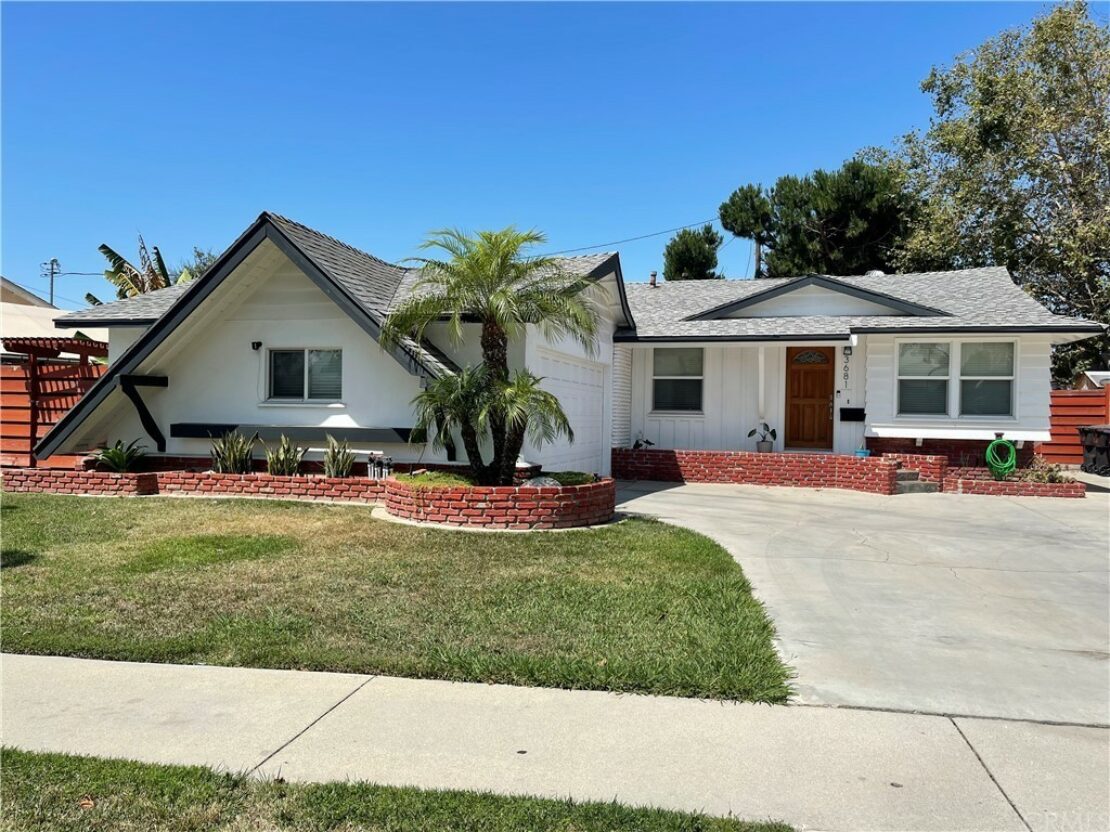 The home’s exterior main feature is an awesome brace of E-ticket catslides on the garage.

The home is fairly large, with more than 1,600 square feet of living space that includes three bedrooms and two bathrooms on an ample 7,000-square-foot lot giving the buyer the opportunity to add on, build an accessory dwelling or throw in a swimming pool.

The huge family room ​​has “wood-looking” porcelain tile, exposed beams and a custom island extending from the kitchen.

Its master bedroom includes a walk-in closet and remodeled en suite bathroom with subway tile flooring and a walk-in shower. If you want to live off the land, the backyard features a grove of fruit trees bearing bananas, mangos and lemons.

The home’s listing agent is Rick Rodriguez of Century 21.

A couple of houses down, at 3691 Monica Ave., is another cool-looking Storybook home with a severely steep A-frame entryway bracketed by scalloped, suicidal catslides (my life changed when I found out about catslides). 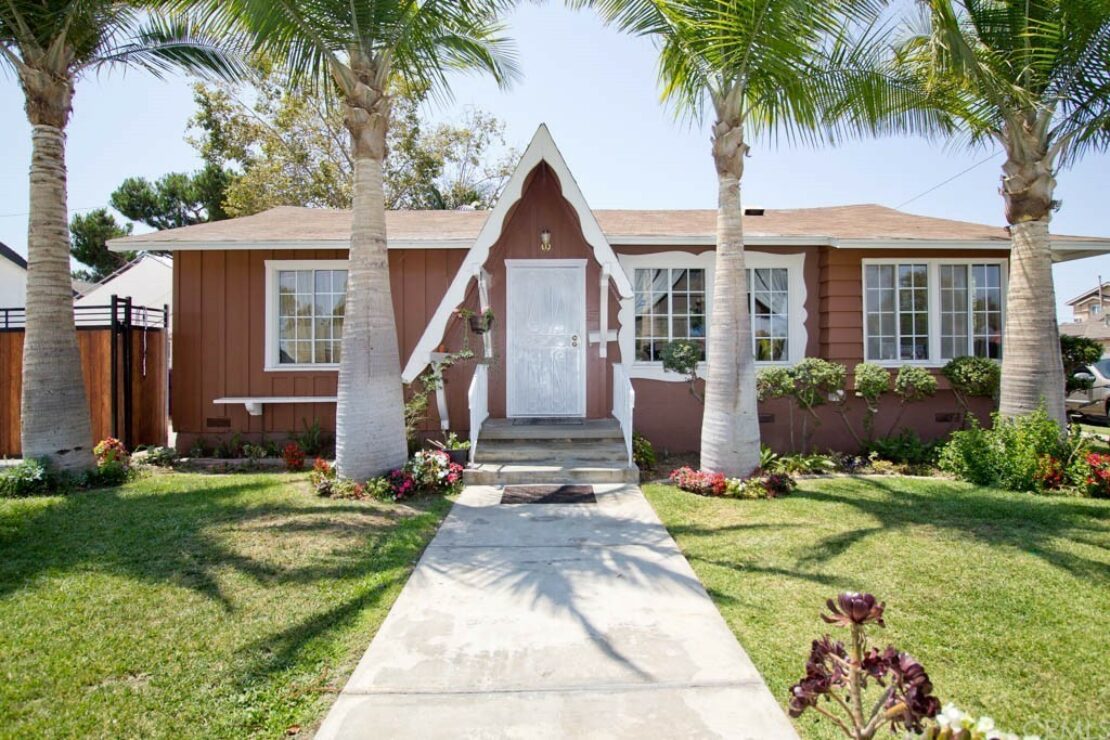 Listed by Art Tarango, of Legends Realty, at $769,000, the three-bedroom, 1,554-square foot home has hardwood flooring, a nice-size shotgun kitchen and a large living room.

The garage has been converted to an ADU, so you can either kick one of your kids out of the main house or generously invite your mother-in-law to live with you in exchange for her baby-sitting or house-cleaning.

But for our money, the main selling point is a treehouse in the backyard built on a nice, sturdy tree. A great place for your kids and their friends to leaf through dirty magazines and smoke cigarettes while your mother-in-law is waxing the kitchen floor.