The proposed plan would allow Beachwood to operate a 170-square-foot shipping container positioned in the open promenade area of the shopping center where it could serve beer to go and for on-site consumption.

Beachwood, which had a flagship location in Seal Beach before opening its Downtown Long Beach brewpub in 2011, has multiple locations in the area including taprooms in Huntington Beach and Garden Grove, which also operates out of a shipping container at SteelCraft. It closed its Seal Beach location in 2020.

The new location at 2nd & PCH would have about 1,100 square feet of outdoor patio seating situated around the shipping container. 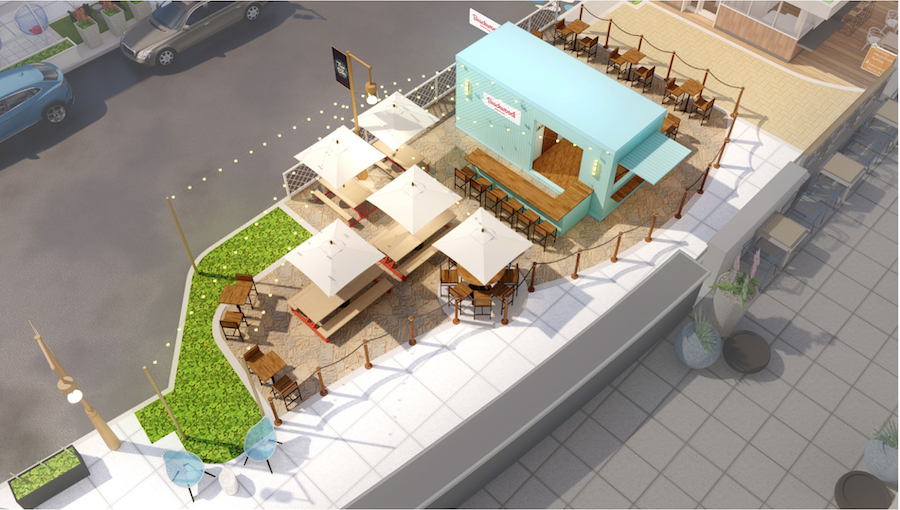 An overhead rendering of the proposed new Beachwood Brewing location at 2nd & PCH.

One of the conditions of the permit being approved is that Beachwood will have shorter operating hours than other restaurants in the shopping center, which are allowed to serve alcohol until 2 a.m. Beachwood’s proposed operating hours are 11:30 a.m. to 9 p.m. from Monday through Saturday, with Sunday’s hours of operation ending at 7 p.m.

Although this Beachwood location won’t serve food, part of the approval conditions will require that outside food from surrounding restaurants be allowed in the tasting room’s patio area.

The Planning Commission is scheduled to vote on approving a conditional use permit for the project because the location would be selling alcohol without food, and would also allow sales of beer to-go.

The commission will address the matter at its Jan. 5 meeting, which is scheduled to begin at 5 p.m.