House lawmakers passed a bill Saturday that would provide $25 billion to the United States Postal Service.

Earlier this week, House Speaker Nancy Pelosi, D-San Francisco, announced she would cut short a summer recess and reconvene lawmakers Saturday to vote on the Delivering for America Act, an emergency bill that would infuse the Postal Service with $25 billion that its board of governors asked for earlier in the year, and reverse the operational changes made a few months ago.

The bill passed 257-150, with Democrats supporting it, though more than two dozen Republicans voted for the measure, defying House GOP leaders and President Donald Trump, who actively urged Republicans to oppose it and has threatened to veto the bill. The measure likely won’t reach Trump’s desk, as the Republican-held Senate is unlikely to vote on it.

Over 7,000 letters, emails and phone calls have been pouring in to the office of Long Beach’s Rep. Alan Lowenthal recently.

Many of them have come from constituents worried about the state of their beloved U.S. Postal Service and what effects the controversial changes to its operation system has had on their ability to receive mail, including prescription medicine, social security checks and other packages. Others worried about voter suppression, fearing receiving their Vote-By-Mail ballots late or that they wouldn’t be delivered in time to be counted.

These are several thousand more messages than his office got on calling for President Donald Trump’s impeachment—by far the greatest outreach Lowenthal has received since he was elected to Congress in 2012, he said.

“The letters are still coming in at a tremendous volume,” Lowenthal told the Post earlier this week. “People love the Postal Service. With all the dislike and distrust of government, that is not true to what people feel about it.”

Long Beach artists even launched an art project meant to support the Postal Service by mailing art via stamped envelopes.

A series of cost-cutting changes in the way the Postal Service operates, made by Trump’s newly appointed Postmaster General Louis DeJoy, has created an uproar throughout the country with Congressional Democrats taking the lead in fighting back.

Trump has targeted the Postal Service over the last several months, especially as more states, including California, announced they were mailing Vote-by-Mail ballots to registered voters in response to the pandemic. 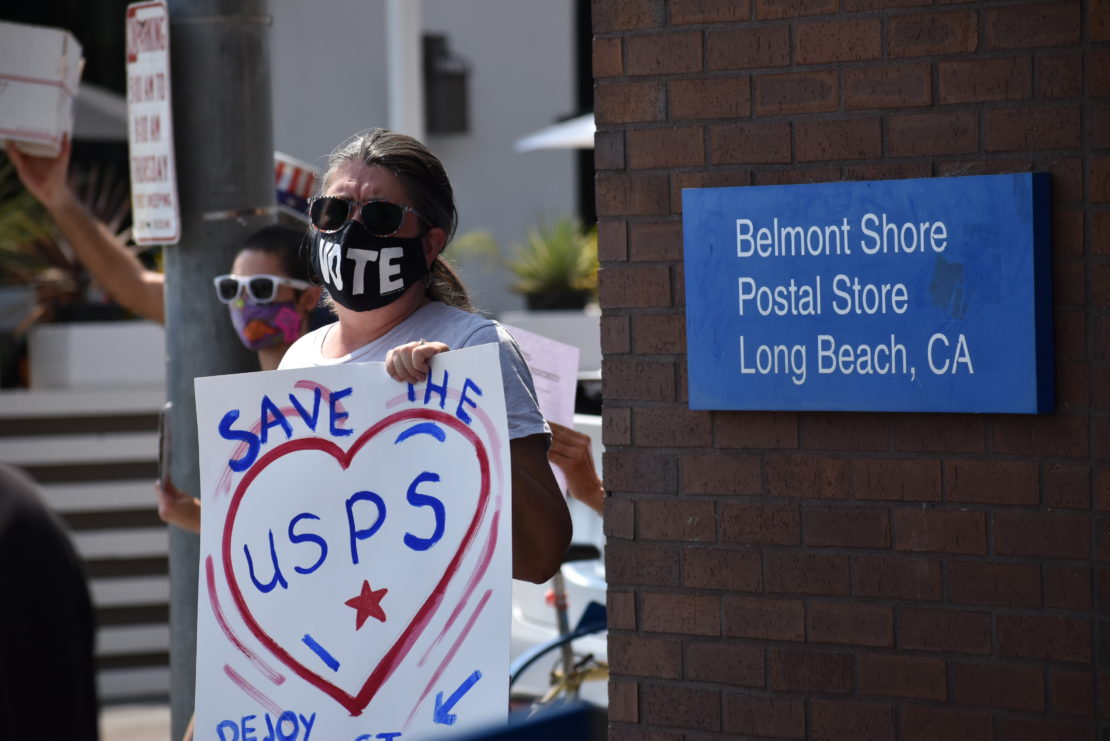 Jacqui Viale holds a sign in support of the United States Post Office during a protest outside the Belmont Shore post office Saturday, Aug. 22, 2020. Photo by Sebastian Echeverry.

“The president saying I’m not going to count that, it’s fraud, it’s unconstitutional,” Lowenthal said. “I don’t know where he’s getting this from. This is not a presidential decision.”

Despite DeJoy’s announcement on Tuesday saying he would suspend the cost-cutting measures until after the November election, it didn’t go far enough to reverse the damage done.

“He admitted he had no intention of replacing sorting machines or blue mail boxes. Plans for overtime are not in the works,” Lowenthal said. “It’s a step but it’s not sufficient.”

On Wednesday, Lowenthal was one of about 90 House Democrats to sign onto a letter to the agency’s board of governors calling for the removal of DeJoy, who is a major funder of Trump and has, with his wife, financial stake in several of the Postal Service’s competitors.

“We think that this is an attack on Democracy and DeJoy must be removed immediately,” Lowenthal said.

The embattled postmaster general testified during a Republican-led Senate Homeland Security and Governmental Affairs committee on Friday during which he said the Postal Service was capable of delivering the nation’s election mail securely and on time.

Also on Friday, the USPS Board of Governors announced the establishment of a bipartisan Election Mail Committee meant to oversee the agency’s support of the mail-in voting process.

DeJoy will speak again during the House Committee on Oversight and Reform, which is chaired by Rep. Carolyn Maloney, D-New York, who authored the Delivering for America Act.

Lowenthal said he was confident that the House of Representatives would pass the bill on Saturday, counting on the same nearly 90 House Republicans who earlier in the year voted against a Bush-era bill forcing the Postal Service to pre-fund health benefits for future retirees.

“We really take this stuff seriously,” Lowenthal said, “and if you want a democratic, free society you got to allow people the right to vote and make it easier for them and do it in a way that’s safe.”

Also on Saturday, community members continued to rally behind the Postal Service as several protesters took to the streets outside the Belmont Shore post office as part of a nationwide movement to “Save the Post Office.”

They held signs in support of the post office and chanted, “We love the mail, and we won’t let it fail.”

Protester Jacqui Viale said the US Postal Service is essential for individuals to receive important items, such as medications.

“We need it for so many things–– business, medication, letters to grandchildren, for voting,” she said. “We need to protect our Postal Service right now, it is part of our constitutional rights and we are going to stand with postal workers.”

Sebastian Echeverry contributed to this report.