Local rabbit rescue up to its ears with 125 bunnies; Here's how you can adopt • Long Beach Post News Support our COVID-19 coverage with a tax-deductible donation — Click here
- ADVERTISEMENT -

Lest you get the idea that only cats and dogs are glad to hang with humans, know that a bunch of bunnies are good company, too.

“Rabbits are gentle, intelligent, endearing animals,” said Caroline Charland, president and founder of the nonprofit Bunny Bunch Rabbit Rescue. “In the right home with the proper care, they can live 12 to 14 years.”

Bunny Bunch is a nonprofit rescue with locations in Fountain Valley and Montclair. Since 1984, the organization has rescued and adopted out every type of rabbit from American fuzzy lop to zemmouri. They also take in species of a lesser ear, such as guinea pigs and chinchillas.

Speaking of ears, the rescue is up to its after rescuing 125 little cottontails living in 90-degree heat after their breeder died. Last year, Bunny Bunch also grabbed up three rabbits who were severely burned in a California Heights alley fire that was likely deliberately set. Seven other rabbits and several pet birds died in the fire, but the three had an impressive recovery thanks to the hard work, competence and dedication of the rescue’s volunteers.

“It was a crazy time. For days, I was doing over 60 medication applications a day,” Charland said.

The rabbits, named Braveheart, Amore and Kwan, were in horrible shape when they were brought in—some of the before photos I felt were too gruesome to post here. But the transformation from near-death to adorable, fluffy and adoptable was miraculous. 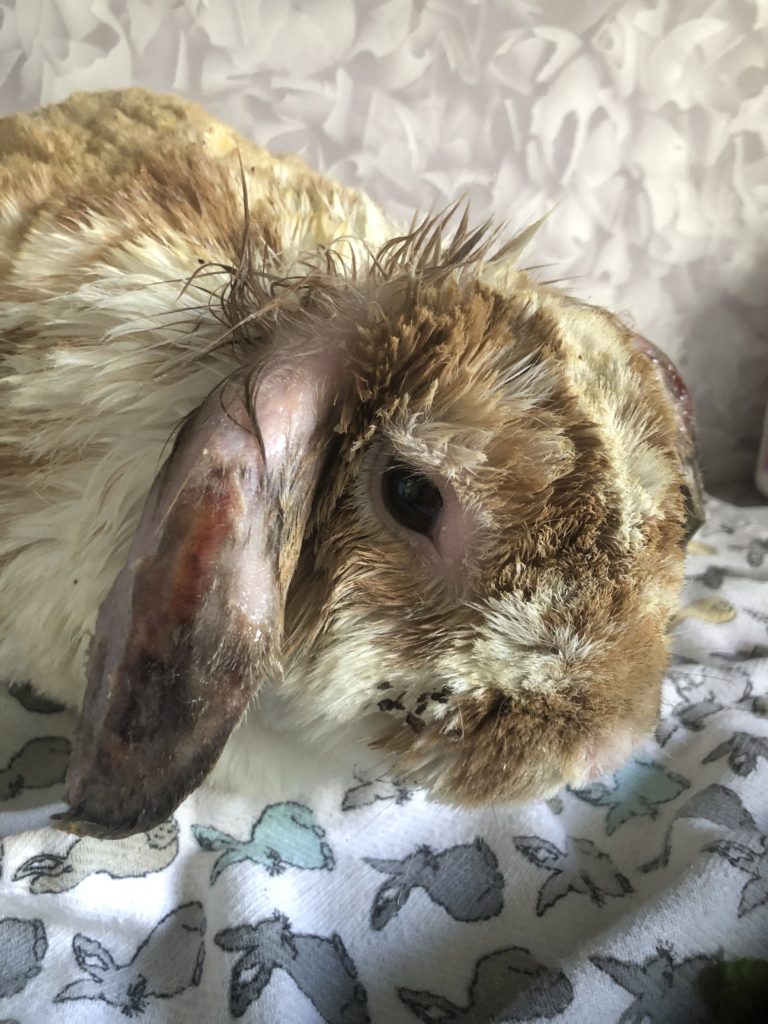 This is Kwan when he came in after the fire. His scorched ears and fur were dreadful to behold; sadly, his wasn’t the worst of the three rescues. Photo courtesy of Bunny Bunch Rabbit Rescue. 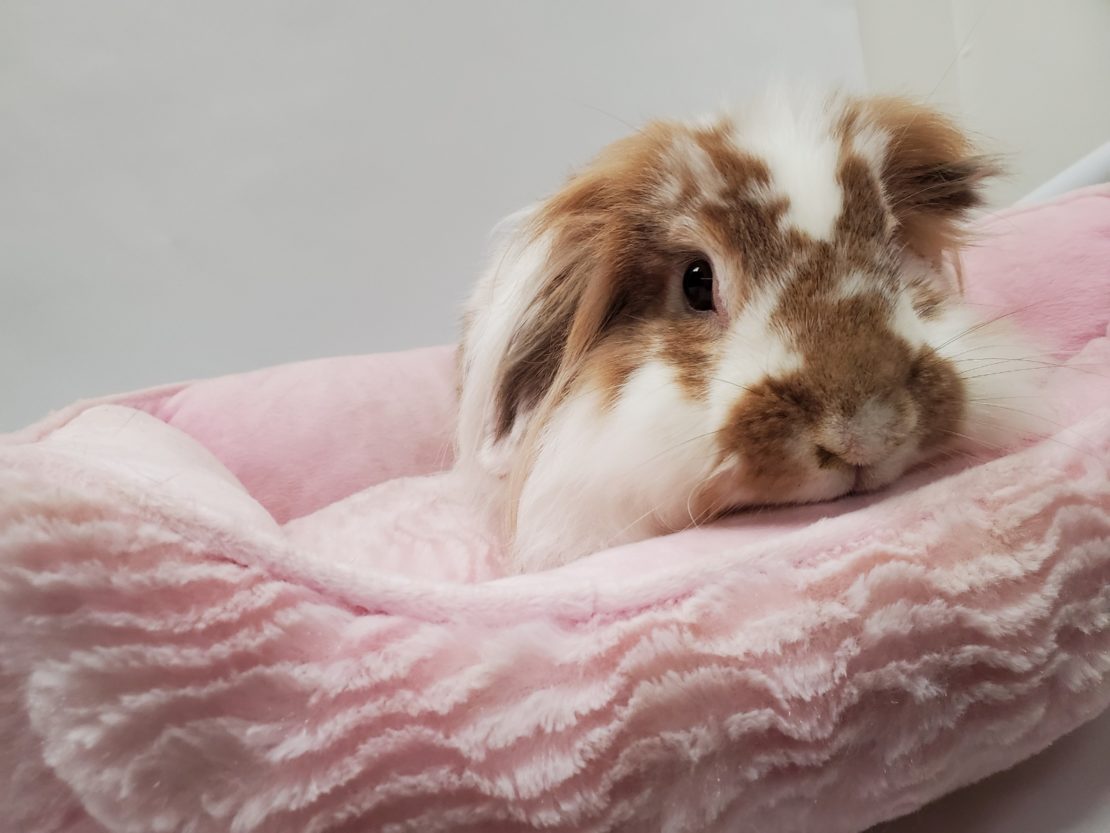 Can you believe this is Kwan? He’s safe at home. Photo courtesy of Bunny Bunch Rabbit Rescue.

Amore, another of the injured rabbits, on his adoption day. His before photo was too hideous to show here, but it is emblematic of the tireless work and devotion of the volunteers. Photo courtesy of Bunny Bunch Rabbit Rescue.

Before the pandemic set in, when rescues and shelters could still bring their animals to public adoption events, Bunny Bunch bustled with activity. Besides allowing people in to pat the bunny, they offered classes and agility-training workshops. Folks could bring their long-eared buddies to have play dates with other rabbits as long as all the little guys were healthy and fixed.

Now, everything’s done curbside or online at both locations. People with rabbits, guinea pigs or chinchillas at home can order supplies or imaginative toys and handmade treats, some crafted by Charland, at Bunny Bunch Boutique.com. There are options for online shopping and same-day curbside pickup.

“We’re not allowing the public inside at all so we can all stay safe to care for our rescued animals,” Charland said. “We’re wearing masks, gloves, washing our hands and disinfecting throughout the day. We’re doing different shifts for animal care so we’re not all there at the same time.”

Since the pandemic began, many rescues and shelters both locally and nationally have been adopting animals through appointments. All rabbits have been spayed or neutered. To take home a little critter from Bunny Bunch Rabbit Rescue, look over the photos of the pets and fill out an application here. Upon approval, the rescue will set up an appointment for you to literally window-shop all the available little guys through a large glass pane where they’ll all be doing what they do best—being cute as bunnies. And chinchillas and guinea pigs. 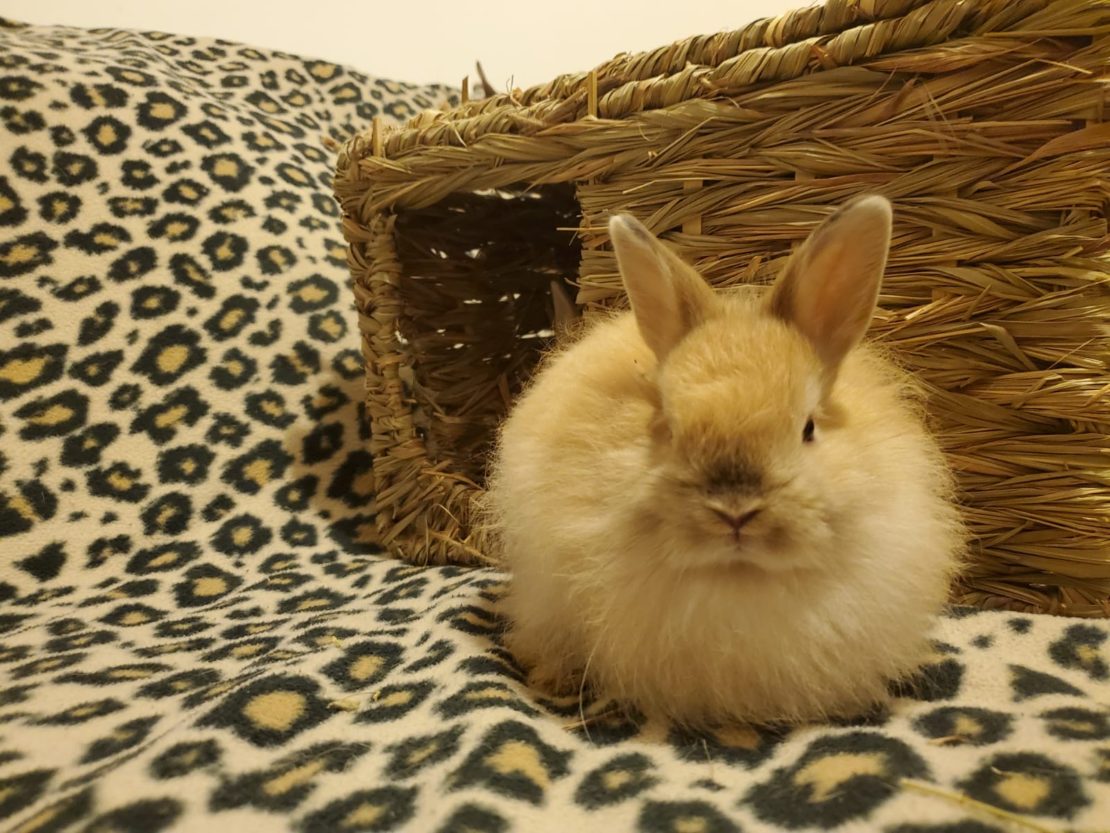 Copper with his Siamese-cat-type markings is one of the tiny babies rescued from the breeder. Charland says he’s super-friendly and would make a great companion. Photo courtesy of Bunny Bunch Rabbit Rescue. 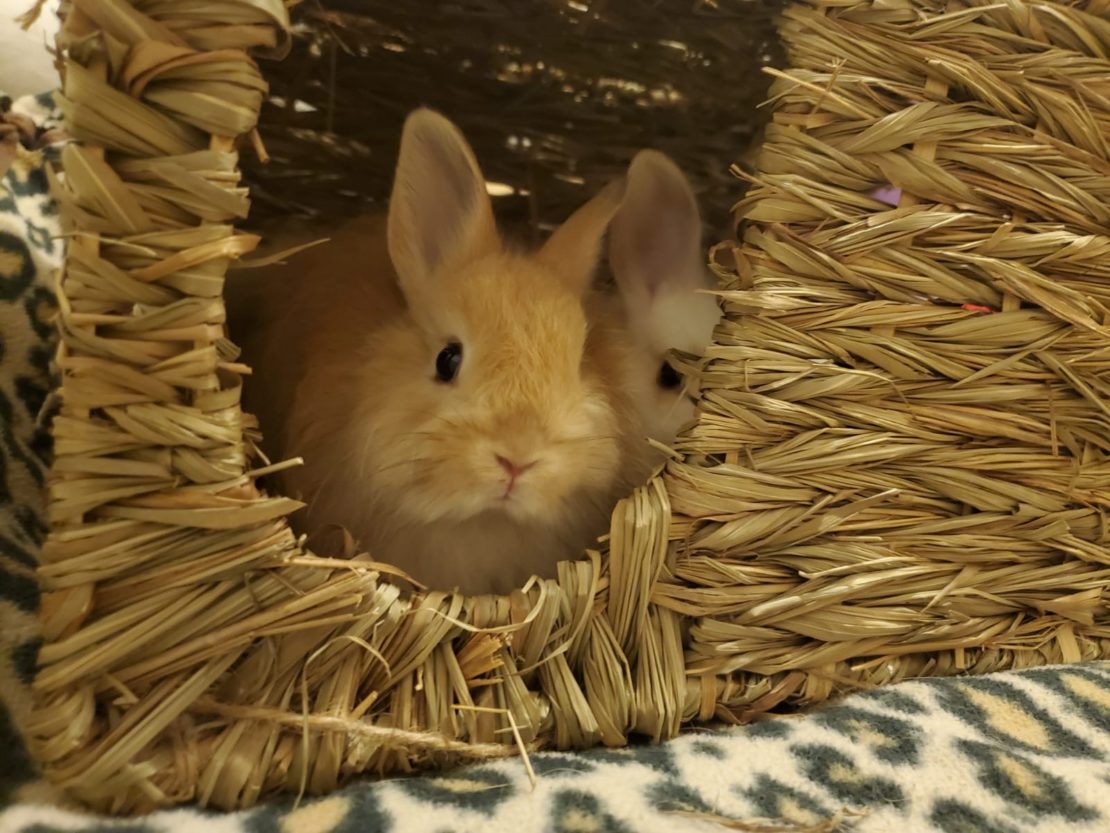 Of course, there has to be a Bugs, or a Bugsy, anyway! Bugsy is Copper’s little cuddlemate for the moment. He, too, was rescued from extreme heat conditions at a breeder’s home. Video courtesy of Bunny Bunch Rabbit Rescue.

If you can see the bottom of the kibble bag

West Coast Toyota of Long Beach bought $3,000 worth of pet food last month to deliver to people in need in our community. If anyone you know is in this position, take a photo of the food you give to your pet, and include your name, contact information and a brief description of your work situation to [email protected]. Fix’n Fidos will deliver the food to you or arrange for you to pick it up.

Fix’n Fidos is a nonprofit established by KTLA reporter Kacey Montoya to provide free spay/neuter to Southern California residents who can’t afford the procedures. Since there’s been a crimp in the mobile clinics’ availability, Montoya has shifted focus to people who may have trouble finding food for their friends. Monetary donations made on the organization’s page will help the effort along.

Pets of the Homeless‘ home page gives a self-description as the only organization focusing only on providing food and care for pets belonging to homeless people. Businesses and other organizations across the country receive in-kind donations of food and other needs that the dogs and cats’ human families can pick up at outreach locations. The following Long Beach businesses will accept your donations:

Long Beach Animal Care Services has spay/neuter vouchers available. They’ll take a healthy nip out of the cost of a procedure. Residents of any of the five cities served by the shelter—(see above)—can telephone the general number at (562) 570-7387 to request a voucher.

The Spay/Neuter Project of Los Angeles (SNP/LA) is back in business for free and low-cost spay/neuter services, and they’re extending the hours of their vaccination clinics. Beginning June 18, the San Pedro clinic, located at 957 N. Gaffey St., will give shots every third Thursday between 9 a.m. and 8 p.m. Call (310) 574-5555 to see if you qualify for services.

The following pet-related businesses regularly feature cat, dog and rabbit adoptions, but as of now, adoptions are mainly by appointment. Click on the links for each rescue in case of updates or changes. These organizations operate through donations and grants, and anything you can give would be welcome. Please suggest any Long Beach-area rescues to add to the list.