Two years after Long Beach voters approved the creation of an independent redistricting commission to combat gerrymandering, city officials are now in the application process that will ultimately produce 13 commissioners tasked with redrawing council district lines.

However, despite outreach efforts by the city to bring in a diverse pool of applicants, a large bulk of the candidates come from only 3 council districts and skew older, wealthier and white—a stark contrast to the city’s demographics.

In a report presented to the city council during Tuesday’s meeting, city staff noted that as of May 19, 186 applications have been received.

However, a breakdown of the applicant pool, based on May 8 numbers with 154 applications, showed that council districts 1, 7 and 9 had a combined total of only 30 applicants.

In comparison, the city’s majority ethnic/racial group are Latinos, making up just over 40% of the population, followed by about 30% white and about 13% black and Asian residents, each.

According to the Census, the city’s median household income is about $61,000 and median age is 36.

The city started taking applications in April, conducting outreach efforts on social media and via utility bill inserts as well as other methods of promotion. Since the city’s charter requires a minimum of 35 applicants, including 3 from each district, the city does not need to extend its application process beyond the June 30 deadline.

“I think it’s reasonable to think that people may not be paying as much attention to redistricting as they probably would be under normal circumstances,” said 8th District Councilman Al Austin, referring to the pandemic.

Ninth District Councilman Rex Richardson acknowledged some missed opportunities to promote the commission during the city’s discussions on COVID-19 and its affect on the black, Latino and Asian communities.

“I think this is a wake up call to double-back with our communities both on the census and this redistricting commission,” Richardson said.

The redistricting commission charter amendment, known as Measure DDD when it was voted on in 2018, was an effort largely backed by the city’s Cambodian community hoping to have a say in keeping its culture unified under one district instead of being divided into mostly 2 districts as it is now.

A map of Cambodia Town, which is spread across council districts 4 and 6. Courtesy of Equity for Cambodians.

Laura Som, co-chair of Equity for Cambodians, which helped spawn the Measure DDD movement, said while some in the community expressed interest in applying, the pandemic has hit the Cambodian community hard.

“This is one of the most traumatic events in our lives,” said Som, who leads the Cambodian Town nonprofit The MAYE Center. “Cambodian small businesses are going out of business; many of those who were supporting their parents, grandparents, and children have lost their jobs.”

With families facing financial stress, many are opting not to apply. Instead, surviving the pandemic has taken precedence, she said.

Som did note that older Cambodians, many survivors of the Khmer Rouge genocide, are encouraging their children to apply by the deadline.

“My hope is that they can see how important it is to have them sitting in that commission,” said Charles Song, who helped Som co-chair Equity for Cambodians, of the young leaders he hopes will apply.

Song said he planned to apply for the commission but found out he does not qualify because he is a resident of Signal Hill, even though “99.9%” of his work is in Long Beach. “My heart is in Cambodia Town,” he said.

Deputy City Manager Kevin Jackson said the city is looking closely to see if Congress approves the Census Bureau’s new schedule due to the pandemic, which has pushed back outreach efforts and deadlines for census data. 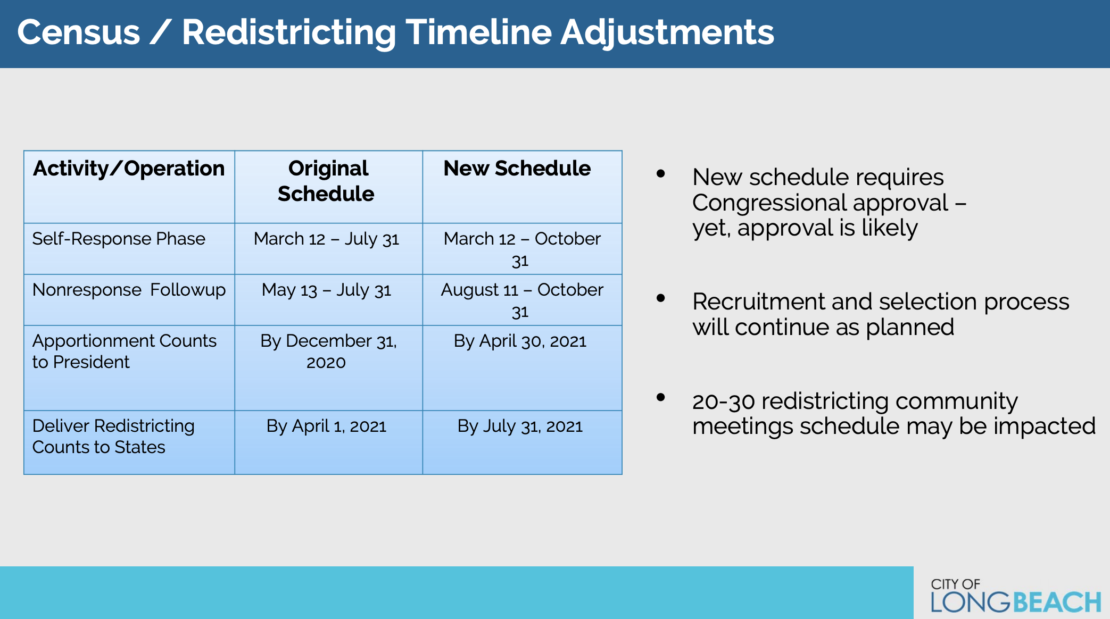 The city is also looking to see if state legislators approve the newly introduced Senate Bill 970, which would move the next primary election date from March to June in 2022.

New maps must be approved by the commission at least 6 months before the next election in order for them to apply to that election cycle, Jackson said.

City staff said once all applications are received at the end of June they will be reviewed in July. A sub-pool of 20 to 30 applicants (including at least 2 candidates from each council district) will then be selected by the newly created ethics commission on Nov. 1 and the full commission will be established by Dec. 1. Trainings begin in December as well.

If you are interested in applying for the position as redistricting commissioner click here. Applications are due by June 30, 2020.